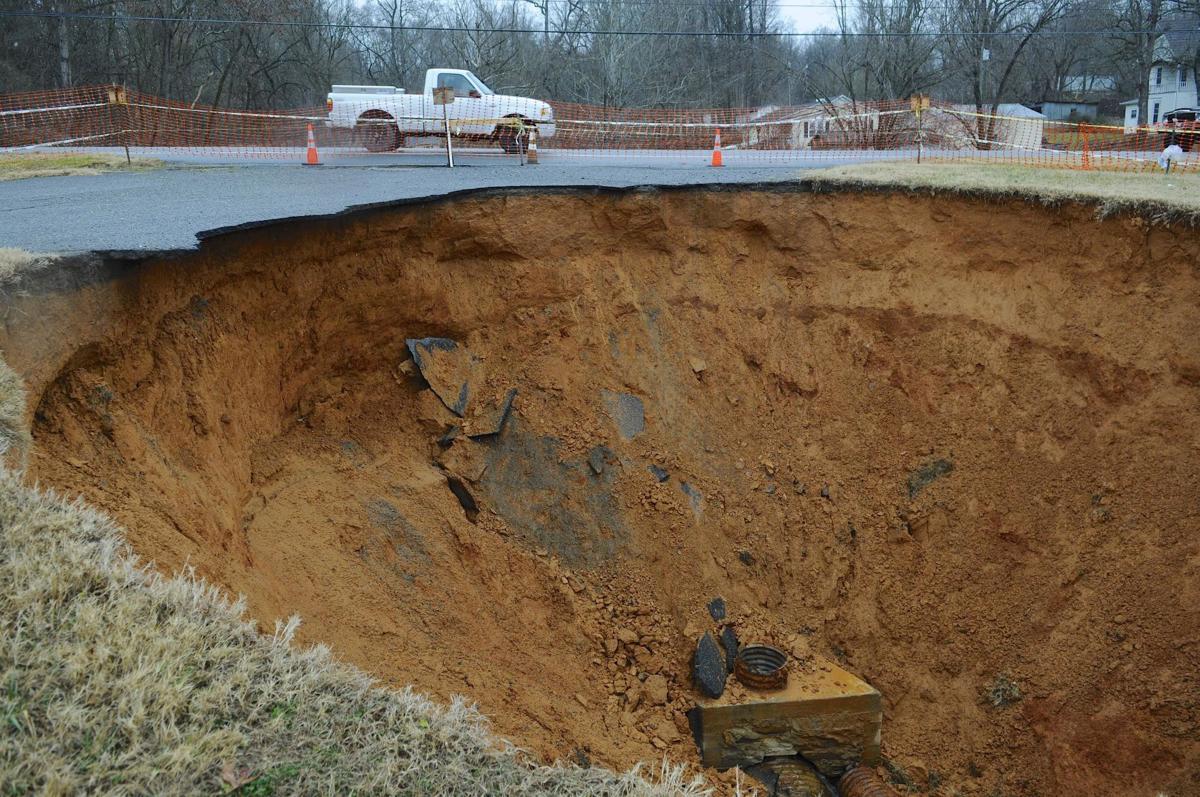 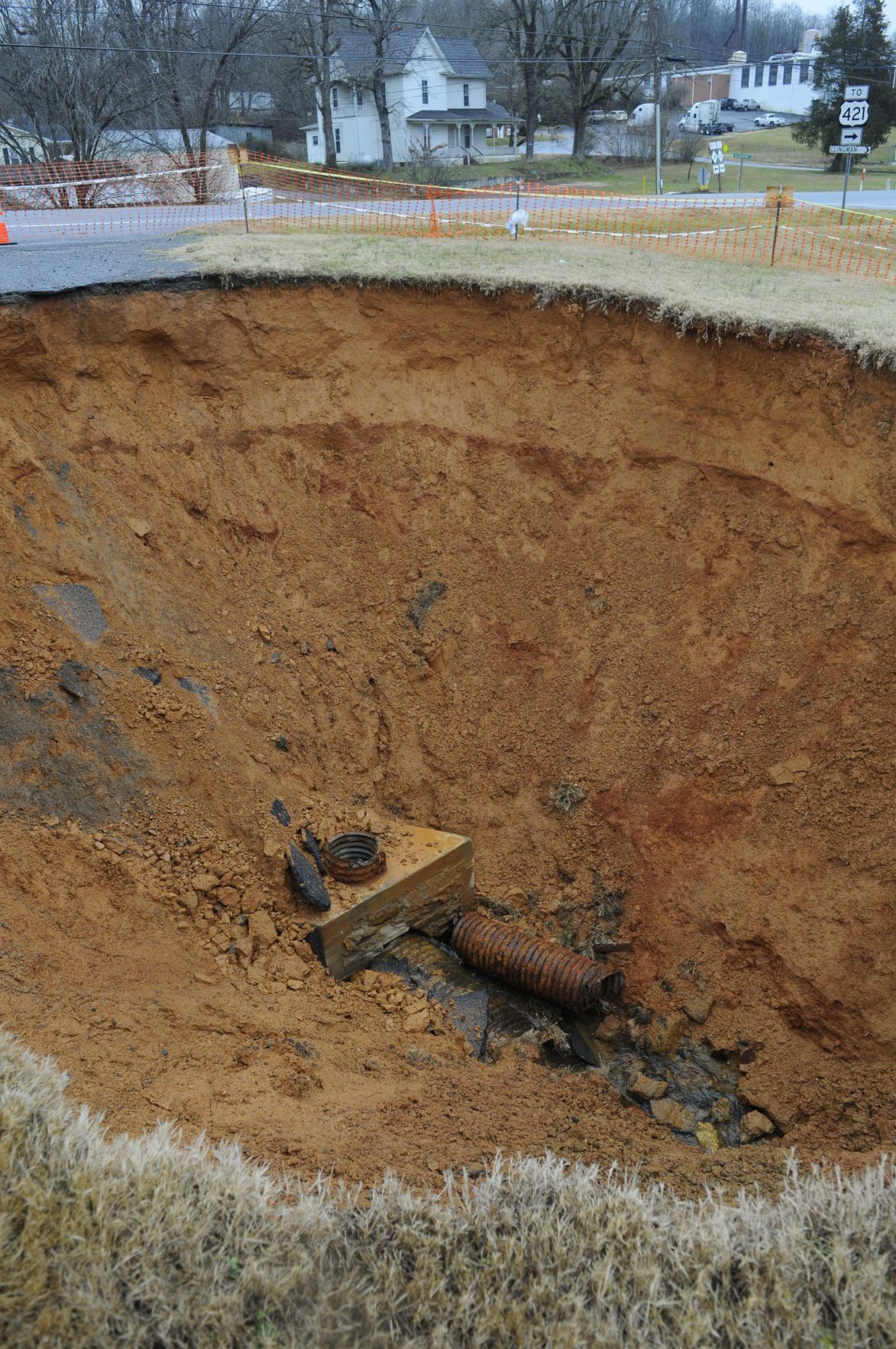 Large sinkhole in Ronda, near the intersection of N.C. 268 East and Clingman Road, apparently is related to a failed culvert at the base of the hole.

Large sinkhole in Ronda, near the intersection of N.C. 268 East and Clingman Road, apparently is related to a failed culvert at the base of the hole.

The Ronda Board of Commissioners has joined the governing bodies of Wilkesboro and North Wilkesboro in addressing drainage issues, including a large sinkhole a few feet off N.C. 268 East near the Clingman Road intersection.

Ronda Commissioner Sandra Simmons raised the subject at a Ronda board work session Thursday night, saying the worst drainage problems are in the lower end of town between the railroad tracks and the Yadkin River. Simmons lives on Second Street, which is in that part of Ronda.

“When we start to lose our property, something needs to be done. We need an engineer or someone to study this and see if grates and drainage pipes are where they need to be,” said Simmons.

No action was taken on authorizing such a study, but there was discussion about who is responsible for addressing the drainage problems. The Town of Ronda, N.C. Department of Transportation, private citizens and the Yadkin Valley Railroad, which owns the train tracks through Ronda, were all mentioned.

Mike Pettyjohn, DOT Division 11 engineer, said Monday that the large sinkhole near N.C. 268 East appeared after heavy rain on Nov. 11 and 12. This same weather event resulted in severe flooding in southeastern Wilkes and a disaster designation for Wilkes, Alexander, Iredell and Caldwell counties.

Pettyjohn said the DOT highway right of way extends 30 feet on either side of the N.C. 268 East centerline, but the DOT isn’t responsible for repairing the sinkhole even if it’s within this right of way because it resulted from work by a party other than the state.

The sinkhole occurred where someone other than the state installed a concrete box with culverts that connect to a DOT culvert beneath N.C. 268 East, he said, adding that it resulted from a culvert failure at the concrete box. One or more of the connecting culverts appear to have broken off. The sinkhole is partly in a parking lot.

Bergie Speaks of Ronda, owner of the property where the sinkhole appeared, said Friday that he doesn’t know who installed the concrete box and connection with the culvert beneath N.C. 268.

Speaks said he also doesn’t know what plans exist for repairing the sinkhole and isn’t sure who is responsible for this. He said he intends to have more communication with Ronda officials about the matter, especially since a new Ronda mayor (Rhejean Benge) and other new board members were elected in November.

Also during the work session Thursday night, the Ronda board discussed proposed renovations to a portion of Ronda Town Hall with water damage. The repairs would be on the portion of the building referred to as the archives room.

It was stated in the meeting that funding would come from the town’s reserve funds and would result in little being left in reserves. Simmons said she understands that the renovations are needed, but recommended seeking grant funding related to the town hall being a historical building. Originally, it was the Ronda High School gym.

Board member Kevin Reece said he secured a proposal for doing the work for $19,300, which he said is a good price. “I don’t know if we advertised this” for bids, but whoever does it needs to be secured, added Reece, who was elected to the board in November.

The proposed renovations were on the agenda for the Ronda board meeting Tuesday night, which was past the deadline for this issue.

Rain and snow showers in the evening, becoming all snow overnight. Some sleet or freezing rain possible. Low 31F. Winds light and variable. Chance of precip 70%. Snow accumulating 1 to 3 inches.

Dog days during a pandemic

Protect the right to be wrong

No rights for unborn under Biden administration

Trump 'lit match' for incident at the Capitol