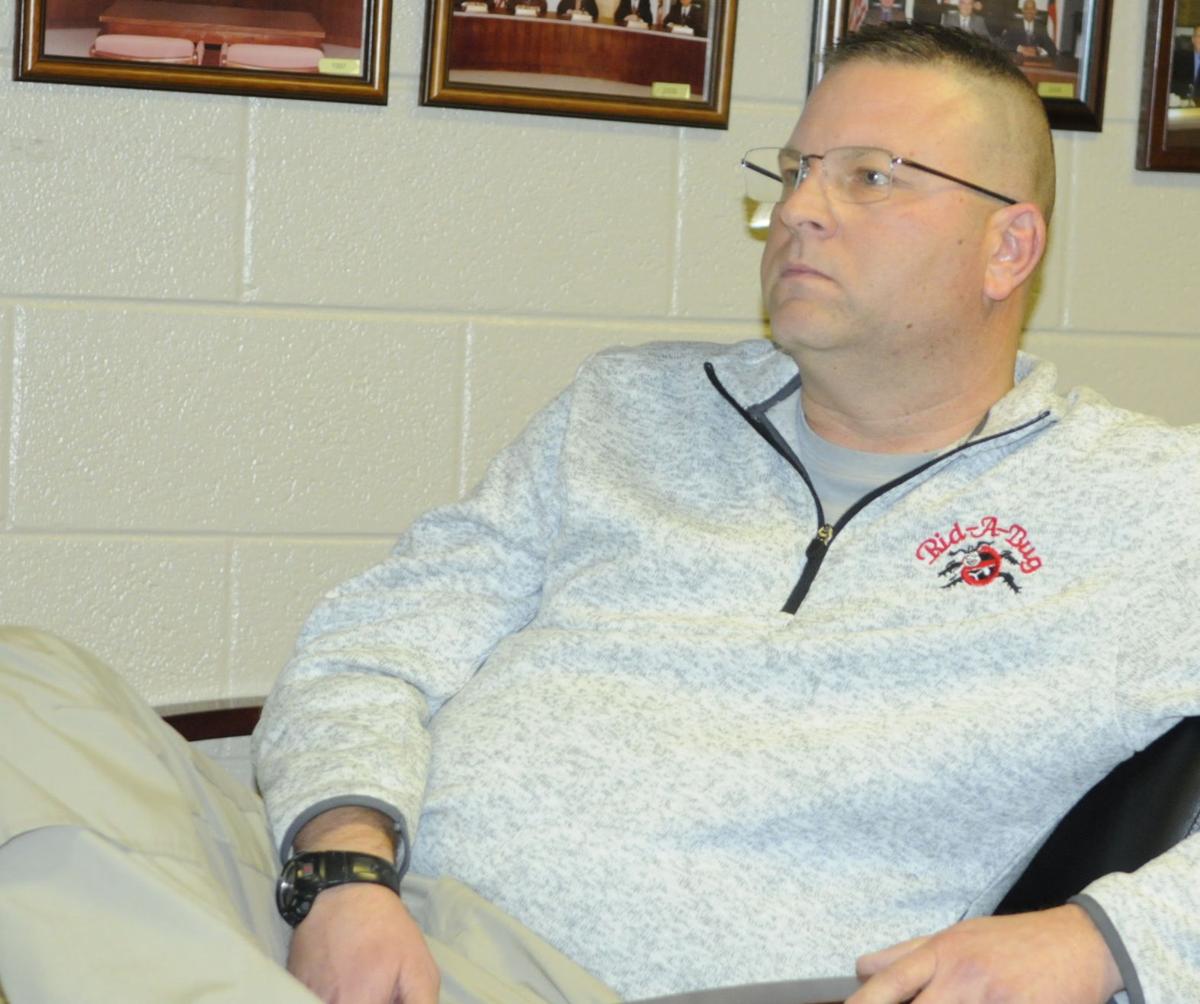 SWORN IN before they testify at Wilkes Board of Elections hearing are Marty L. Roberts, holding his right hand up at left, and Heather Dean, holding her right hand up at right. Sitting on the front row is Nathan Miller of Boone, Robert' attorney.

SWORN IN before they testify at Wilkes Board of Elections hearing are Marty L. Roberts, holding his right hand up at left, and Heather Dean, holding her right hand up at right. Sitting on the front row is Nathan Miller of Boone, Robert' attorney.

Wilkes County school board candidate Marty L. Roberts said Saturday that he will appeal a Wilkes County Board of Elections decision that made him ineligible to run for elected office in Wilkes.

The Wilkes Board of Elections on Friday unanimously approved a motion by board member Timothy Joines ruling that Roberts’ domicile is in Yadkin County and not Wilkes. The motion said this decision was based on applying the board’s findings of fact in the case to N.C. General Statutes 163-127.5.

The Wilkes board reviewed a draft written decision reflecting its verbal decision on Monday and was expected to approve it Tuesday. Statutes require that the board issue a written decision within 20 business days of the date (Dec. 27) Heather Dean of Boomer filed an affidavit challenging Roberts candidacy.

Wilkes Board of Elections Director Kim Caudill said the Wilkes board is trying to help expedite the appeals process as rapidly as possible because ballots for the March 3 non-partisan Wilkes school board election are scheduled to be available Jan. 13. She noted that the N.C. Board of Elections has authority to delay printing ballots for Wilkes.

Caudill said that as long as the Wilkes Board of Elections decision isn’t reversed, Roberts isn’t considered a Wilkes school board candidate.

After receiving the Wilkes board’s written decision, Roberts has two days to file an appeal with the N.C. Board of Elections. Statutes say the state board “shall… render its opinion on an expedited basis,” but no certain number of days is stated.

The state board’s decision on an appeal would be based on a transcript of Friday’s hearing. A freelance court reporter, hired by the Wilkes board, was present during the 3 ½-hour hearing to provide this. Roberts and Dean both were sworn in before they spoke and were questioned by the Wilkes board and attorney Nathan Miller of Boone, representing Roberts.

An appeal of the state board’s decision would go to the N.C. Court of Appeals.

Dean’s affidavit said that while Roberts owns and may occasionally occupy a home in Wilkes at 2734 Somers Road, Hamptonville, she has reason to believe he lives in Yadkin at 1208 Union Church Road, Hamptonville.

Dean said during the hearing that she looked into the matter after hearing from others that Roberts doesn’t live in Wilkes.

While being questioned by Miller, Dean said she looked into it after Kathryn Charles, John Willardson and a woman she said is a Republican, whom she didn’t wish to identify, told her Roberts doesn’t live in Wilkes.

After the board ruled that Roberts lives in Yadkin and not Wilkes, Dean said in an interview, “I feel like the Constitution was upheld and that was the important thing. I am upset that it had to come out this way because I really think Marty has done good things for our community…. I appreciate the things he has done for our community.”

N.C. statutes say a person’s residence is the place in which a “person’s habitation is fixed, and to which, whenever that person is absent, that person has the intention of returning.”

The Wilkes board’s “findings of fact,” derived from evidence and statements in the hearing, included that Roberts:

• continued living at 2734 Somers Road with his wife after they were married in 1996, and that he lived there while two of their three children were born;

• testified that his wife and children primarily stay at 1208 Union Church Road;

• stays overnight at 2734 Somers Road sporadically, sometimes only once or twice a month;

• has ties to Wilkes through his workplace (Rid-A-Bug Exterminating), where his children go to school, his church and his personal bank;

• address is listed as 1208 Union Church Road on documents filed with the N.C. secretary of state’s office;

• address is listed as 1208 Union Church Road on a theft report filed with the Yadkin Sheriff’s Office in 2016 and on certain other documents.

Roberts is president of the Buck Shoals Fire Department Board of Directors, with its main fire station in Yadkin and a substation in Wilkes.

Roberts filed an affidavit with the Wilkes board on Friday stating, “I have not abandoned my residence of 2734 Somers Road… nor do I intend to abandon said residence.” He made a similar statement during the hearing.

In his closing statement seeking denial of Dean’s petition, Miller noted that the N.C. Supreme Court said “residence” and “domicile” are not interchangeable in a 1972 case ruling. Justice Susie Sharp wrote in that decision, “Residence simply indicates a person's actual place of abode, whether permanent or temporary. Domicile denotes one's permanent, established home as distinguished from a temporary, although actual, place of residence. When absent, it is the place to which he intends to return….”

The 1972 ruling stated that to change domiciles, a person must “abandon” the first domicile and have no intention of returning. He said a 1994 N.C. Court of Appeals case affirmed this. Miller said all evidence from Roberts is that he never intended to abandon the 2734 Somers Road home and that he intends to return there.

The 1972 ruling said that also to change domiciles, the person in question must acquire a residence at another location with the intent of making it the person’s permanent home.

Roberts testified that he spends about two nights per week or per month at 2734 Somers Road and the other nights at 1208 Union Church Road. He said his wife and children also spend some nights in the Somers Road home.

Miller said it doesn’t matter that Roberts’ address is listed as 1208 Union Church Road on his driver’s license and on secretary of state and some other documents. He said it’s true that Roberts owns property and sleeps overnight in both Wilkes and Yadkin, but all that matters is the location of his domicile.

At the start of the hearing, Miller said Dean’s affidavit claiming Roberts’ residence is in Yadkin and not Wilkes cited the wrong statute and one that no longer exists. Miller said that meant Roberts received an improper notice so the Wilkes board couldn’t hear the matter. The board unanimously agreed to proceed with the hearing.

When it was clear that some Wilkes board members investigated the case before the hearing and found a phone book and public documents listing Roberts’ address as 1208 Union Church Road, Miller said that was improper because the board’s role was to impartially hear the case.

The board’s response was that its lawyer, County Attorney Tony Triplett, told the board this was allowed because the board’s obligation was to conduct due diligence and find the facts.

Statutes say “the burden of proof” is on the candidate, to show that he or she is qualified to run for the office in question.