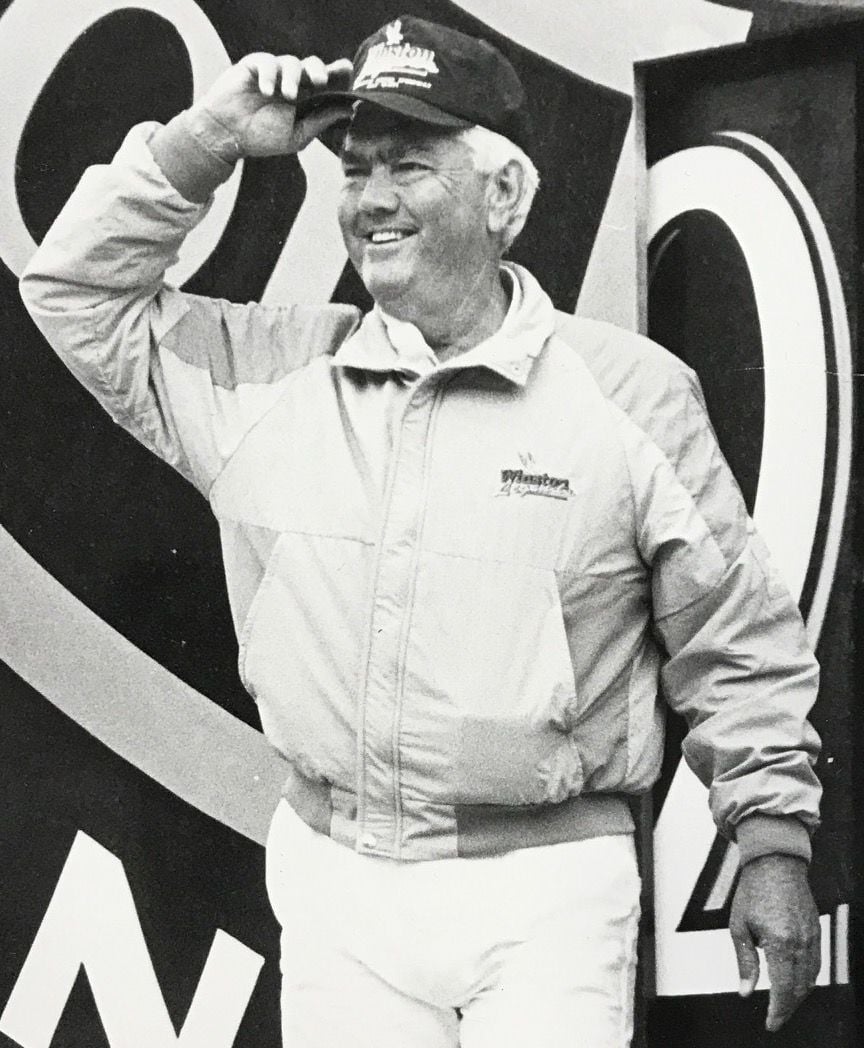 MOST WINS IN A SINGLE SEASON as a driver for Junior Johnson came in 1965, when he was driving the number 26 1965 Ford Galaxie. This was also his last season as a driver.

MOST WINS IN A SINGLE SEASON as a driver for Junior Johnson came in 1965, when he was driving the number 26 1965 Ford Galaxie. This was also his last season as a driver.

He was 88 and had been in declining health for some time.

From the days of his youth making and hauling moonshine in Wilkes through those as a Wilkes-based team owner, his career spanned the history of stock car racing.

Wolfe said Johnson was “one of the last of those sports stars who is not just an ace at the game itself, but a hero a whole people or class of people can identify with. Junior Johnson is a modern hero, all involved with car culture and car symbolism in the South. A wild new thing.”

Even Bruce Springsteen referenced Johnson's exploits in his song, "Cadillac Ranch:" “Junior Johnson runnin' through the woods of Carolina."

“Between his on-track accomplishments and his introduction of Winston to the sport, few have contributed to the success of NASCAR as Junior has,” France continued. Johnson was credited with connecting R.J. Reynolds Tobacco Co. with NASCAR, which led to Winston sponsoring its premier series from 1971-2003.

“The entire NASCAR family is saddened by the loss of a true giant of our sport, and we offer our deepest condolences to Junior’s family and friends during this difficult time,” he said. Johnson is survived by his wife, Lisa Johnson, his daughter, Meredith Johnson, and his son Robert Glenn Johnson III.

NASCAR Hall of Fame Executive Director Winston Kelley today said Johnson was “one of NASCAR’s true pioneers, innovators, competitors and an incredible mechanical and business mind.” Kelley said Johnson’s “legacy and memory will forever be remembered, preserved, celebrated and cherished at the NASCAR Hall of Fame and in the hearts and minds of race fans around the world”

When Johnson was presented with the N.C. Motorsports Association’s Achievement in Motorsports Tribute Award in 2011, he stated, “I was a self-made person. I put more into racing by doing the things that nobody else could figure out or do, and it has helped the sport. About half the stuff you see on the cars today came from our shop.  I’ve had a good career and good life.”

Johnson is credited as being the first to use the drafting technique in stock car racing, referring to staying on the tail of another car and being dragged along in its aerodynamic draft until an opening arose.

Johnson won 50 races in NASCAR’s top division (the most of any driver without a championship) and added 132 victories and six championships as a team owner for Darrell Waltrip, Cale Yarborough, Bill Elliott and Terry Labonte and other drivers. Johnson won the second Daytona 500 in 1960, plus two more as a car owner in 1969 and 1977.

Waltrip said he grew up dreaming of one day meeting Johnson, but surpassed that by getting to drive for his him. “He became my boss and made me a champion, I loved that man, God Bless Jr and his family. You were the greatest!” Waltrip said on Twitter.

Johnson’s teams were based in the Ingle Hollow section off Somers Road in eastern Wilkes. His last race win as an owner was the 1994 Southern 500 with Elliott.

Johnson was born near Ronda in 1931, the fourth of seven children of Robert G. Sr. and Lora Belle Money Johnson.

He was engaged in the family businesses of farming and making and hauling untaxed whiskey and was known for skillfully eluding the law in hopped-up cars.

Johnson is credited with inventing the “bootleg turn,” accomplished by putting a car into second gear, turning the wheel and stepping on the pedal. This created a 180-degree spin, enabling the driver to speed back past pursuing law enforcement.

The law never caught Johnson while he was transporting liquor, but he was arrested while tending a family still in 1956. He was convicted of manufacturing untaxed whiskey and served 11 months in federal prison. When President Ronald Reagan pardoned him on Dec. 26, 1986, Johnson said it was the best Christmas gift he ever received.

Johnson’s first race was at the North Wilkesboro Speedway in 1947, finishing second. It was a dirt track then.

He first raced in NASCAR’s top division when he entered the Southern 500 at Darlington Raceway in 1953. Johnson wrecked and finished 38th out of 59, but caught attention by opening the hood of his crumpled car when it caught fire, removed his shirt and batted out the flames himself.

Johnson’s most wins in a single season as a driver came in 1965, when he won 13 of his 36 starts. This was his last season as a driver. His last win was in October that year at the North Wilkesboro Speedway, which later had the Junior Johnson Grand Stand. He was named one of NASCAR’s 50 Greatest Drivers in 1998.

Johnson later manufactured and sold liquor – legally. He also had lines of pork skins and country ham, produced in partnership with Suncrest Farms in Wilkesboro.

The N.C. Board of Transportation approved naming U.S. 421 in eastern Wilkes the “Junior Johnson Highway” in 2004.

In 2012, Johnson sold his multi-million home and 150-acre farm off U.S. 421 in Yadkin County, near the Wilkes line, and moved with his wife and children to Charlotte.

“The Last American Hero is gone and so leaves a huge dent in NASCAR racing. Junior Johnson was one of American sports' great characters and one of the best racer and car owners ever. His mountain man drawl and tricks were legendary. He’ll go down as one of racing’s great ticket sellers,” said former race promoter Humpy Wheeler.

Junior Johnson was a great man and race car driver and owned. But you all forgot about the man that started to win race's for Junior. Bobby Allison the famous #12 Coke machine.