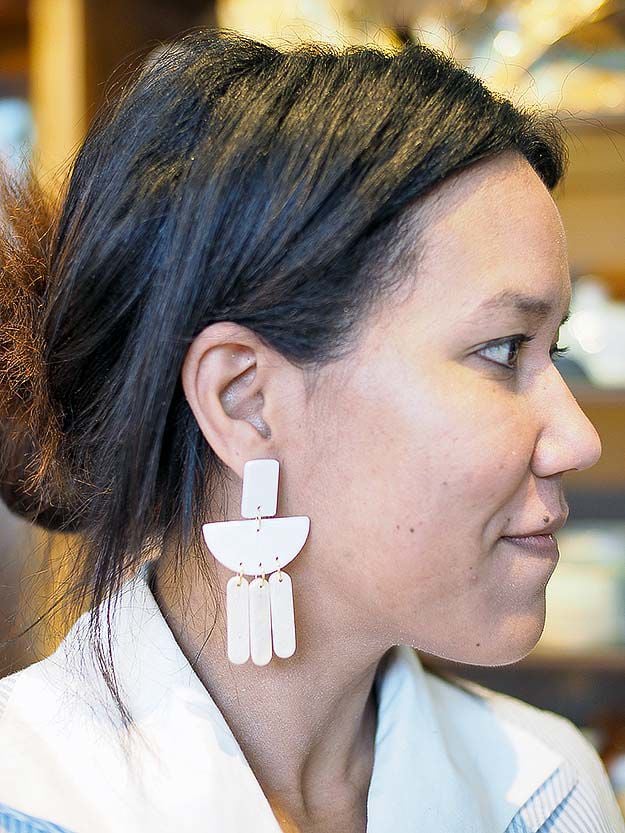 KAYLA PETERS displays a pair of her polymer clay earrings, which are lightweight, nickel-free and inexpensive. She sells them online and in three local boutique gift shops. 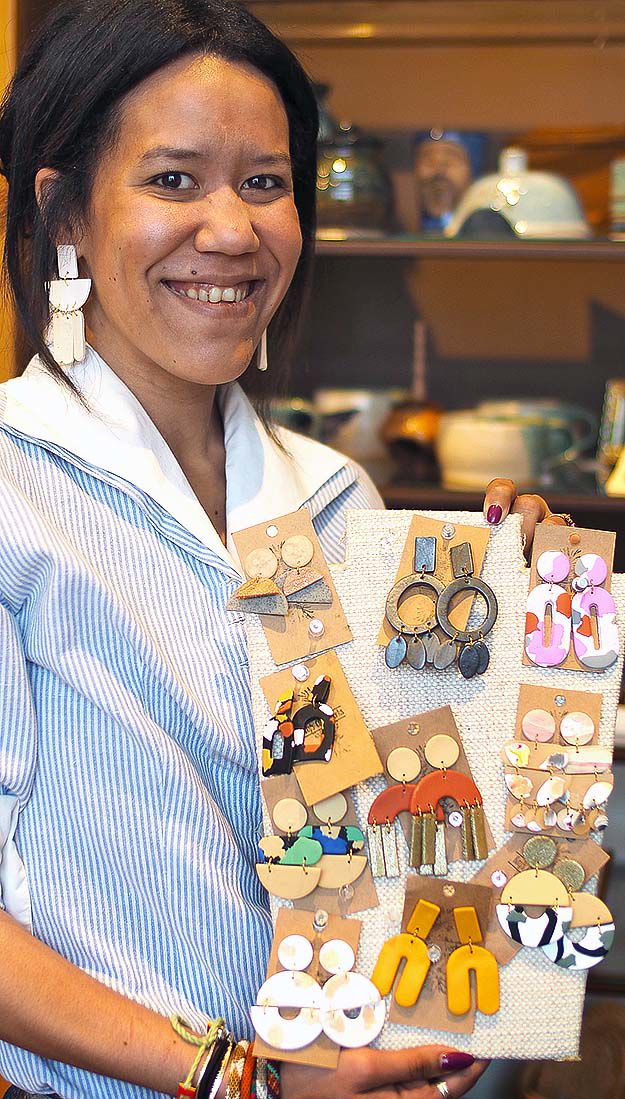 CLAY EARRINGS made by Kayla Peters of North Wilkesboro are gaining traction across the nation. Here, Peters holds the display on sale at the Wilkes Art Gallery in North Wilkesboro.

KAYLA PETERS displays a pair of her polymer clay earrings, which are lightweight, nickel-free and inexpensive. She sells them online and in three local boutique gift shops.

CLAY EARRINGS made by Kayla Peters of North Wilkesboro are gaining traction across the nation. Here, Peters holds the display on sale at the Wilkes Art Gallery in North Wilkesboro.

It’s not often that a native of Hawaii or a former Carolina Panthers cheerleader finds a niche in Wilkes County, but Kayla Peters is both and has become established here as a maker of popular clay earrings.

As the singular force behind Kay’s Clay Works, the North Wilkesboro resident is doing her best to keep up with demand for her hand-crafted, inexpensive earrings.

Peters and her husband, Stephen Peters, and their son, Stephen Jr., a student at North Wilkes Middle School, moved here from Charlotte about four years ago.

Peters said she started making earrings for personal use because she found it hard to justify spending $40 to $45 on a pair.

After being repeatedly asked where she got her earrings, Peters started selling them to friends about eight months ago. She soon realized, “I can do this better and at a price point where everyone can have them.”

The business soon took off. She started hawking her earrings on Etsy, Instagram and Facebook, and in local boutique gift shops—Sweet Smiles and V’s Type in Wilkesboro and the Wilkes Art Gallery in North Wilkesboro.

“I’ve always loved fashion; it’s something I wanted to go to school for. I love styling people, including my older sisters,” she explained.

It takes Peters about an hour to make a pair of earrings and she sells each pair for $12 to $20. She said it’s critical to condition the clay so it holds up for years, making sure it is cured properly so it doesn’t break. “It’s not an easy process and it takes a lot of time and patience to do it properly.”

She said it’s hard to explain just why her business is growing so fast. “People are seeing it, and it’s moving. I just about fell out on the floor when ‘Talk of Alabama’ reached out to me.”

Peters appeared live on ABC affiliate WBMA’s “Talk of Alabama” morning TV show on Dec. 30 in Birmingham. Her dad’s family is from Alabama, and he urged her to call talk show host Nicole Allshouse about guesting on the show.

“Now, more and more people in other states are messaging me every day, and it’s like a dream,” she said. “It’s something I’ve always wanted to do, but to see it happening is pretty cool.”

Because Peters crafts her earrings from polymer clay, they’re extremely light and nickel-free for people with sensitive skin. She said it’s so light that most people can’t feel the weight on their earlobes.

Peters was born and raised on the Hawaiian island of Oahu, the youngest of five siblings. At age 18, she started attending the University of Hawaii. While spending the summer in California with her mother after her first year in college, she met Stephen, who was about to move to Charlotte and join family there.

The two moved to Charlotte in 2006. Peters was working full-time there as a waitress about three years later when she decided, on a whim, to try out for the Top Cats, the NFL’s Carolina Panthers cheerleading squad.

Kayla has been dancing since age 11 and is trained in jazz, ballet, hip-hop and other disciplines. “Dance was always an outlet for me, and the Top Cats were having auditions. I didn’t know what I was getting myself into, but I just knew that I missed dance.”

She arrived at Bank of America Stadium to find a line of 250 female dancers wrapped around the block. “Then I started shaking, thinking, ‘What am I doing? This is insane.’”

But Peters kept making the cuts, eventually joining 24 others on the team and on the Panthers sideline in 2009. “It was probably the hardest thing I’ve ever done, but I learned so much, and it was such an experience.”

She left the Top Cats after one season to devote more time to her son, a year old at the time, and to reduce the stress of having two full-time jobs.

Peters has another goal now: to bring her Top Cats experience to Wilkes dance studios. “Dance and (earrings) are my two biggest passions. I had the studios reach out to me earlier, and now that I’ve got the opportunity, that’s what I want to do next.”

Kayla and Stephen Peters followed their jobs with Lowe’s Companies Inc. to Wilkes County. She worked with the executive group at the Lowe’s Call Center in Wilkesboro. About two weeks ago, Peters took a leap of faith and quit her Lowe’s job to focus on making and selling earrings.

“I’ve always wanted to inspire and motivate people, but sitting in a cube and directly working under the CEO of Lowe’s, I wasn’t happy, so I just decided to jump and pursue this full time.”

She constantly restocks her best sellers, but also does custom earrings for customers who, for example, want to wear the colors of their favorite sports teams. Peters said she puts her heart and soul into every set of earrings she crafts and added, “I take pride in making women feel great.”

Peters has finally found her place, and it turns out she didn’t have to look very far—it’s the featherweight clay creations dangling from her ears.

Partly cloudy in the evening with more clouds for later at night. Low near 30F. Winds light and variable.