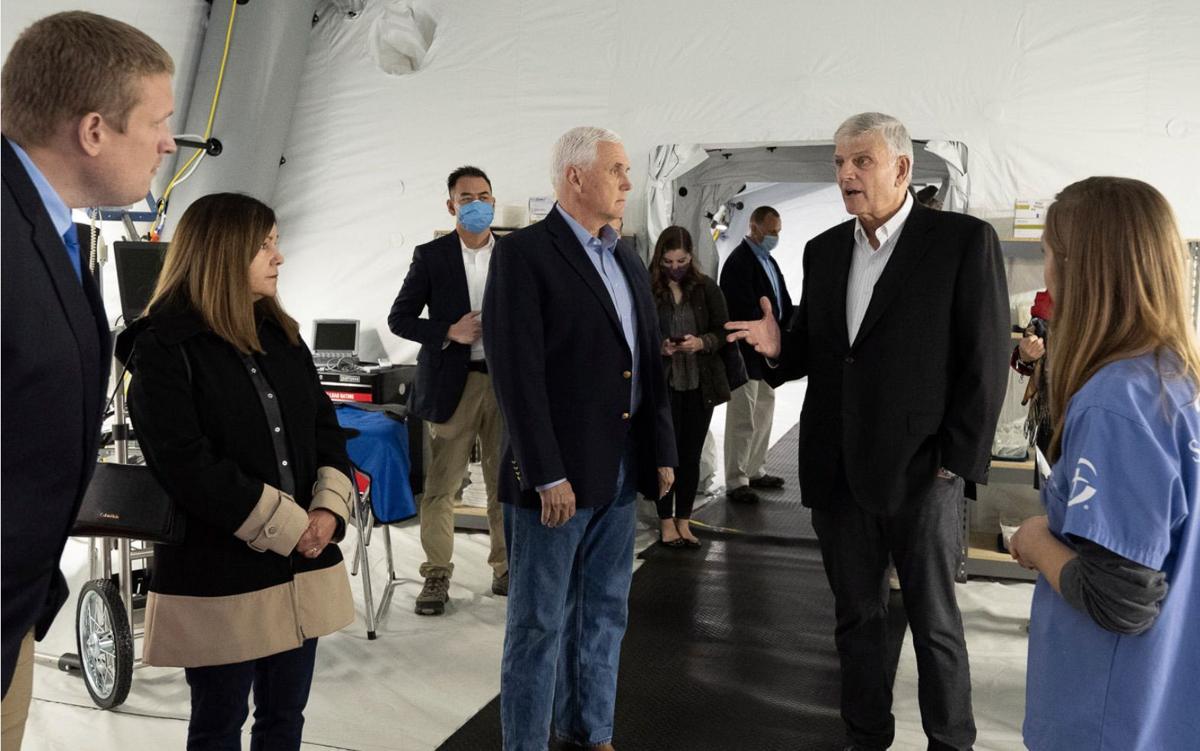 Former Vice President Mike Pence, third from left, and former Second Lady Karen Pence, second from left, listen as Franklin Graham, fourth from left, talks about the work of Samaritan’s Purse inside an emergency hospital set up at the ministry’s warehouse facilities in North Wilkesboro. 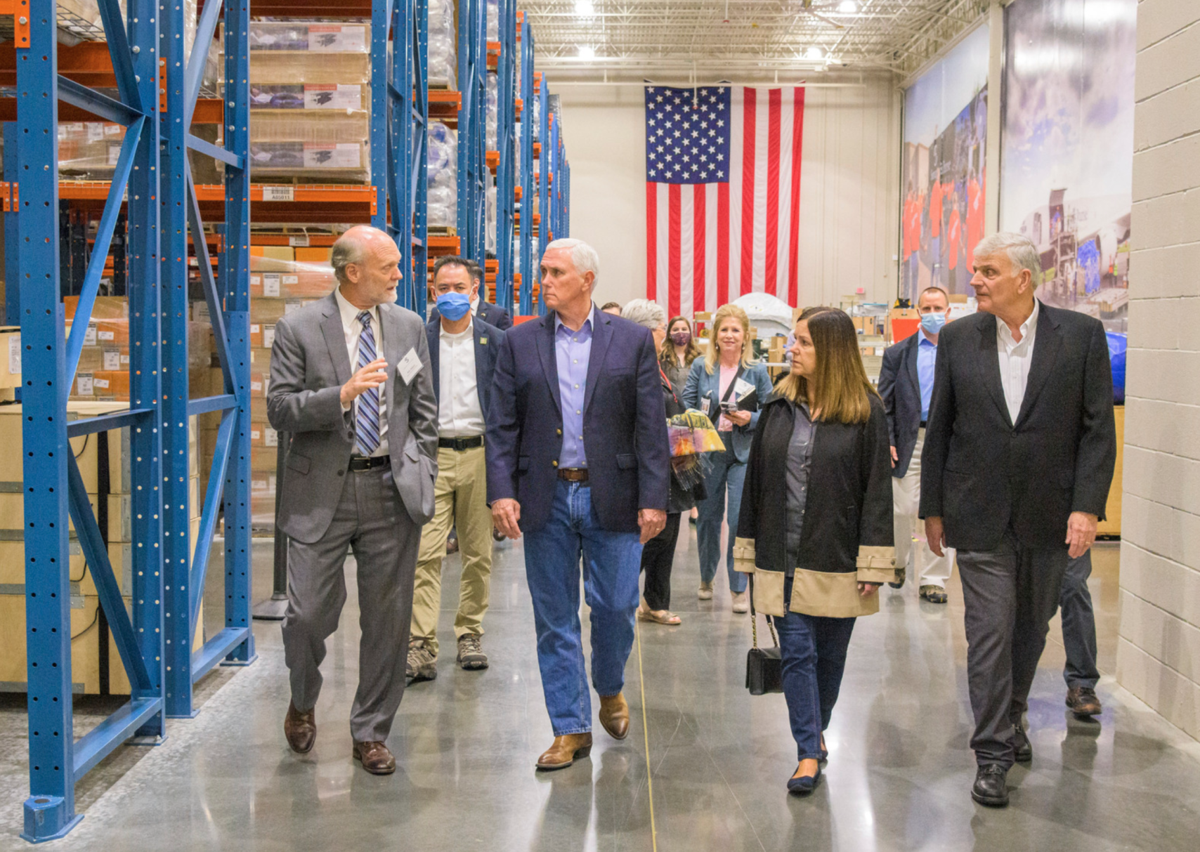 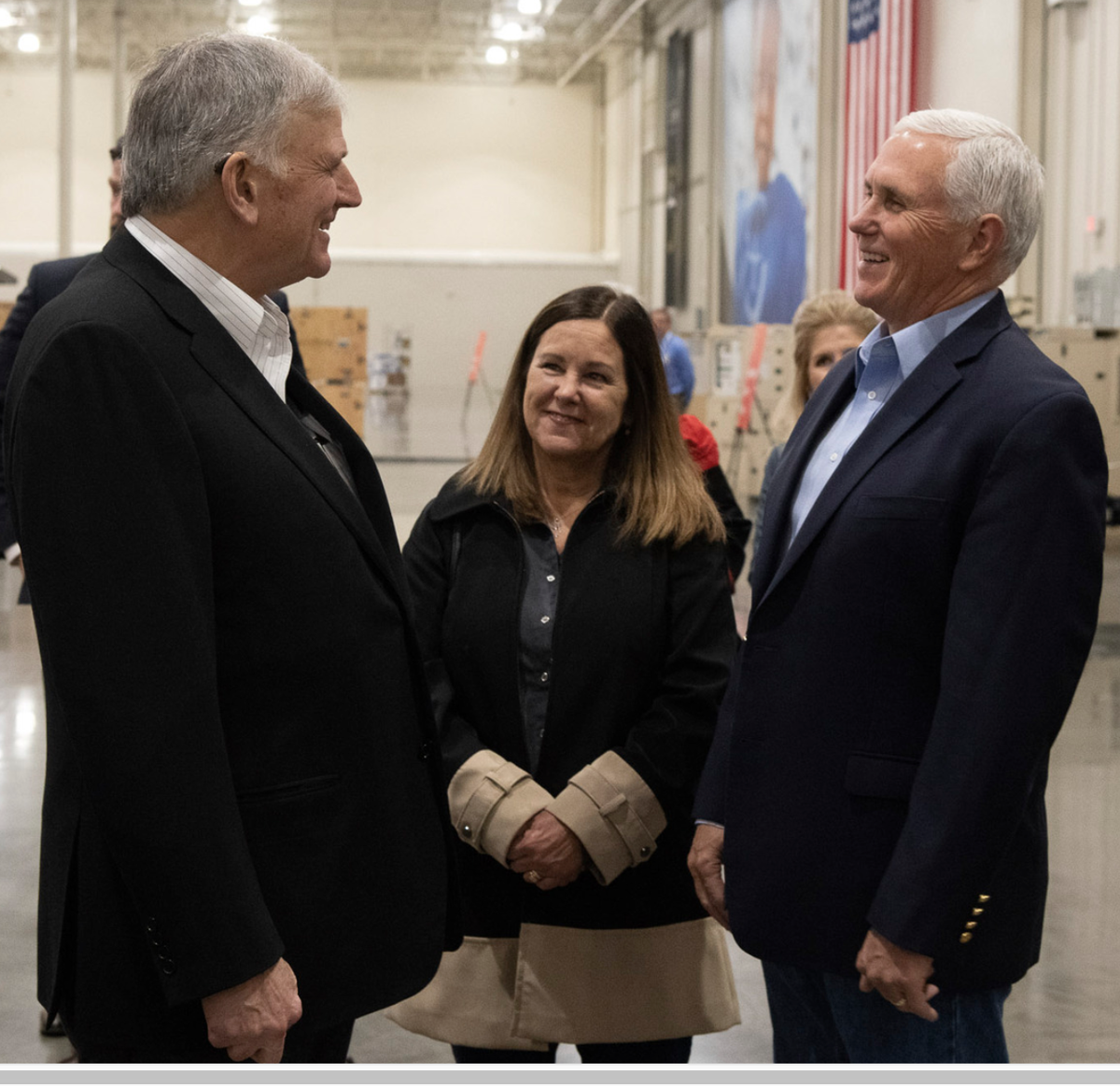 Former Vice President Mike Pence, third from left, and former Second Lady Karen Pence, second from left, listen as Franklin Graham, fourth from left, talks about the work of Samaritan’s Purse inside an emergency hospital set up at the ministry’s warehouse facilities in North Wilkesboro.

“We are here to volunteer with Samaritan’s Purse because we believe in this ministry,” Pence told the organization’s staff and board members. “I hope you all know the difference that Samaritan’s Purse has made in the life of this nation and in [God’s] kingdom around the world.”

This was the former vice president’s first visit to North Carolina since leaving office.

According to Samaritan’s Purse, the Pences have been in the field with the ministry several times.

Graham said, “We are so honored that the vice president and his wife came to visit Samaritan’s Purse today. They love the Lord Jesus Christ, and they have served our country, so it’s a privilege to have them volunteer and be a part of what we’re doing in Jesus’ name.”

On March 24, they toured a Samaritan’s Purse Emergency Field Hospital with medical staff who provided life-saving care at coronavirus hotspots and war-ton places around the world.

The Pences were shown how Samaritan’s Purse refurbishes medical equipment to support mission hospitals and how the organization stands ready to rapidly provide relief supplies such as clean water, food, emergency shelter and hygiene kits.

A Samaritan’s Purse emergency field hospital with a mobile respiratory care unit and staff were in Lenoir from the first week of January to the first week of February handling overflow from six hospitals in the area. Nearly 80 COVID-19 patients were treated in the 30-bed hospital, with the final two released from care on Feb. 3.

Also while in North Wilkesboro on March 24, the Pences toured U.S. Disaster Relief units and equipment deployed in response to places hit by tornadoes, hurricanes, floods and other natural disasters.

“There aren’t any specific dates at the moment, but former Vice President Mike Pence was very clear that he is looking forward to volunteering with Samaritan’s Purse in the future,” said Mark Barber, media relations manager for Samaritan’s Purse and Billy Graham Evangelistic Association.

The Pences arrived at and left from the Wilkes County Airport. They didn’t visit any locations besides Samaritan’s Purse facilities in North Wilkesboro, said Barber.

Samaritan’s Purse appreciates the North Wilkesboro Police Department and the Wilkes County Sheriff’s Office for being a part of the security detail that needed to be in place, he added

Samaritan’s Purse is currently in Alabama, helping families who lost everything in recent tornados, as well as assisting flood victims in Breathitt County, Kentucky.

Samaritan’s Purse is helping tens of thousands of suffering people in Tigray, Ethiopia—including children who are at risk of acute malnutrition. The organization’s DC-8 cargo plane has airlifted enough supplemental nutrition to feed 44,000 children for 30 days.

Partly cloudy in the evening. Increasing clouds with periods of showers after midnight. Low 46F. Winds light and variable. Chance of rain 40%.