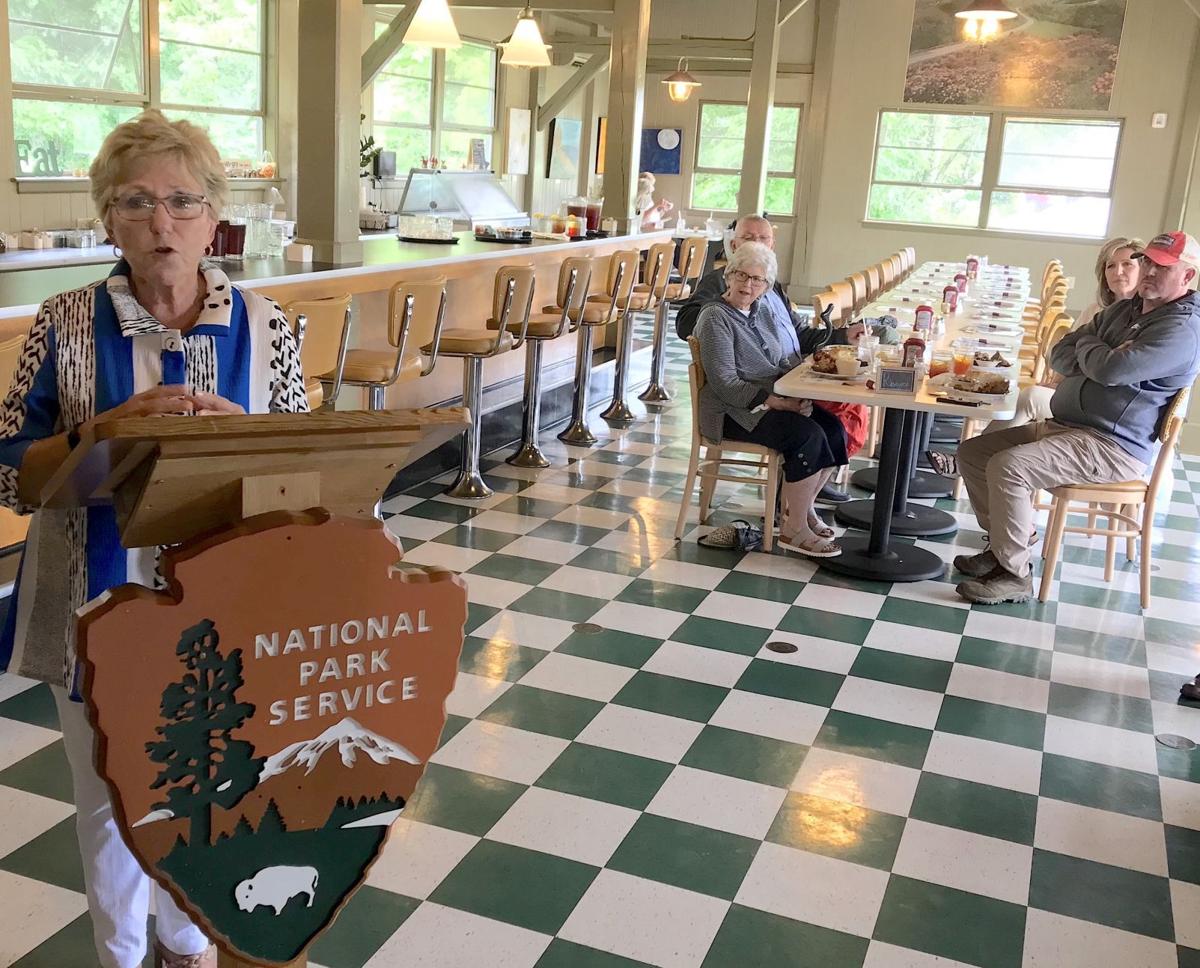 Gayle Manchin, Appalachian Regional Commission co-chair, speaks at the Bluffs Restaurant. At the table are Ken and Carol Canter at left and their son and daughter-in-law, Richard and Carol Canter. Ken and Richard Canter are with Wilkesboro-based Canter Construction, which did the renovation for reopening the restaurant. 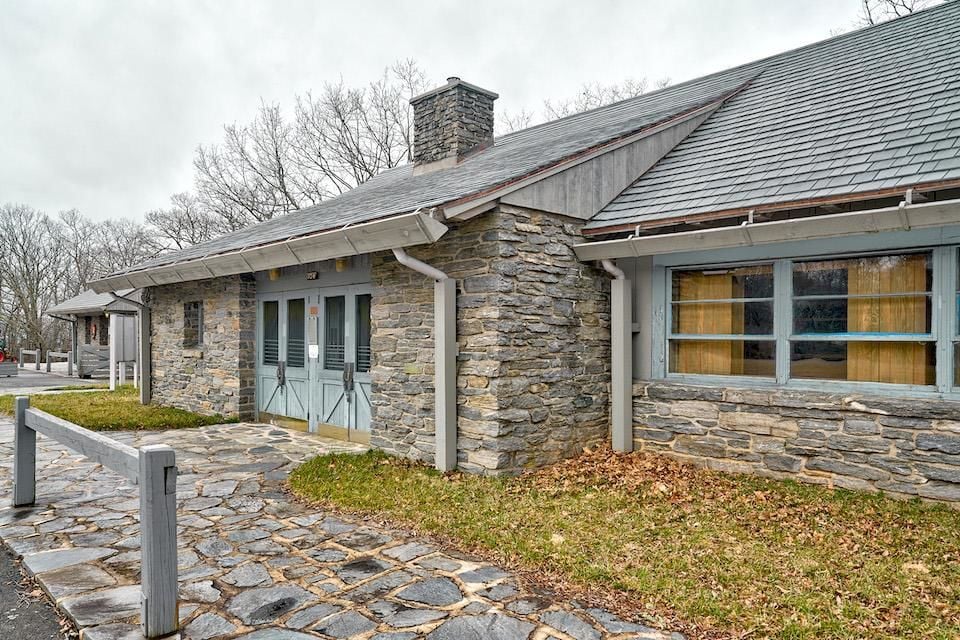 Bluffs Restaurant in Doughton Park has been a popular destination on the Blue Ridge Parkway for decades.

Gayle Manchin, Appalachian Regional Commission co-chair, speaks at the Bluffs Restaurant. At the table are Ken and Carol Canter at left and their son and daughter-in-law, Richard and Carol Canter. Ken and Richard Canter are with Wilkesboro-based Canter Construction, which did the renovation for reopening the restaurant.

Bluffs Restaurant in Doughton Park has been a popular destination on the Blue Ridge Parkway for decades.

Restoration and reopening of the historic Bluffs Restaurant in Doughton Park on the Blue Ridge Parkway was heralded as a model of success through collaboration during an event Thursday.

Nearly $1 million was raised to renovate the Doughton Park restaurant, including $300,000 from the Appalachian Regional Commission (ARC), $350,000 from the N.C. legislature and about $300,000 from over 500 people in fundraising led by the nonprofit Blue Ridge Parkway Foundation.

ARC Co-Chairman Gayle Manchin and Parkway Superintendent Tracy Swartout emphasized the importance of partnerships for the public good in their remarks at the event Thursday.

Manchin said reopening the Bluffs and partner entities and individuals who made it possible reflect what the ARC is all about. She said it’s notable that the effort retained an area’s history while looking ahead by promoting the rippling economic impact of visitors.

“So it’s that dual role of preserving the past and those memories that were created, but now you’re creating an impact to allow the next generation to create new memories,” said Manchin, born in Asheville and raised in Beckley, W.Va.

“That’s a lot of what the ARC tries to do through being a partner. What is so important to the ARC is that local people come together. They know the problems and they look for the solutions and get people to buy in and invest.”

Manchin added, “We truly are at a very opportune time for our country and certainly for the ARC. We have a president who understands rural America and understands that it takes a large investment to maintain and improve quality of life there and he does this with his budget.”

She said she recently learned that West Virginia’s New River begins in North Carolina. While on a two-day tour of sites in northwestern North Carolina last week, she thanked people in the Ashe County town of Lansing for looking after headwaters of the river that is the focal point of the recently-created New River Gorge National Park and Preserve. It’s West Virginia’s first national park.

Swartout said the event Thursday represented a National Park Service (NPS) tradition of strong partnerships. “We couldn’t do what we do” without organizations like the ARC and Parkway Foundation, she said.

Swartout cited the popularity of Doughton Park and the Bluffs Restaurant as a Parkway destination over the years. “It really exemplifies…. that you drive awhile, stop awhile, eat a little cobbler awhile. And that’s the kind of experience that has drawn not just my family but lots of families for generations — and has connected the generations.”

Jim McCleskey, director of the State of North Carolina’s Washington office and representing Gov. Roy Cooper, said the Bluffs effort shows “that public investment for public purpose for public benefit brings private opportunity for generations to come — and they are renewable opportunities. This is a new, old place and we’re so proud to be part of the return of the Bluffs as a place for folks to stop and enjoy.”

He said he was told that Rep. Robert L. “Farmer Bob” Doughton from nearby Laurel Springs, chairman of the U.S. House Ways and Means Committee from 1933-1947 and 1949-1953, pledged to secure support among conservative Southern legislators for passage of Social Security and New Deal programs in the 1930s if the Parkway went through northwestern North Carolina.

The Parkway took the route Doughton wanted. “That’s an example of parochial interests serving national purposes,” said McCleskey. The 7,000-acres Bluffs Park, in Alleghany and Wilkes counties, was renamed Doughton Park in honor of the congressman in 1952.

When McCleskey introduced Manchin, he noted that her husband, Sen. Joe Manchin of West Virginia, is in a position “to get things done the way they need to get done in our United States Senate.” Manchin is a conservative Democrat known for bipartisanship.

McCleskey recognized representatives of Sen. Richard Burr and Sen. Thom Tillis at the event and said Burr and Tillis, both North Carolina Republicans, are part of a non-partisan group with Manchin pushing forward legislation for infrastructure investments that will serve public purposes and create private opportunities now and for decades to come.

Alfred Adams of Winston-Salem, chairman of the Parkway Foundation board, thanked partner entities involved in reopening the restaurant. Adams said the fact that over 500 people contributed money for the reopening “symbolizes the importance of bringing the Bluffs back to life to our constituents.”

The Bluffs Restaurant was the first restaurant on the Parkway when it opened in 1949. Known for its country ham biscuits, fried chicken, berry cobblers and more, the Bluffs

became a favorite dining spot for Parkway travelers and people in Wilkes and Alleghany counties and elsewhere nearby before it closed after no one stepped up to take over a NPS concessioner contract for operating the eatery when it expired in 2010.

A mold problem and asbestos were found in the building. Remediation of the mold issue was completed in 2016, the asbestos was removed and a new roof was installed in 2018.

Atriax Group of Hickory was general contractor to complete the renovations, but the onsite work was done by Canter Construction Co. in Wilkesboro as a subcontractor. The Wilkes company was represented at the event Thursday by Ken and Carol Canter and their son and daughter-in-law, Richard and Carol Canter. Richard Canter said their work started in March 2020 and continued through the COVID-19 pandemic.

New interior fixtures, design upgrades and other work replicates the original look of the restaurant, with the interior design following guidelines of the NPS and N.C. Historic Preservation Office. New kitchen equipment, HVAC, plumbing, and electrical fixtures were installed to meet current safety standards. It has new furniture and communication equipment. Most of the overhead lights are original.

Rita Larkin, Parkway Foundation communications director, said plans for the Bluffs Lodge in Doughton Park remain uncertain. The 24-room motel lacks air conditioning and certain other modern amenities and has been closed for several years. It opened in 1949.