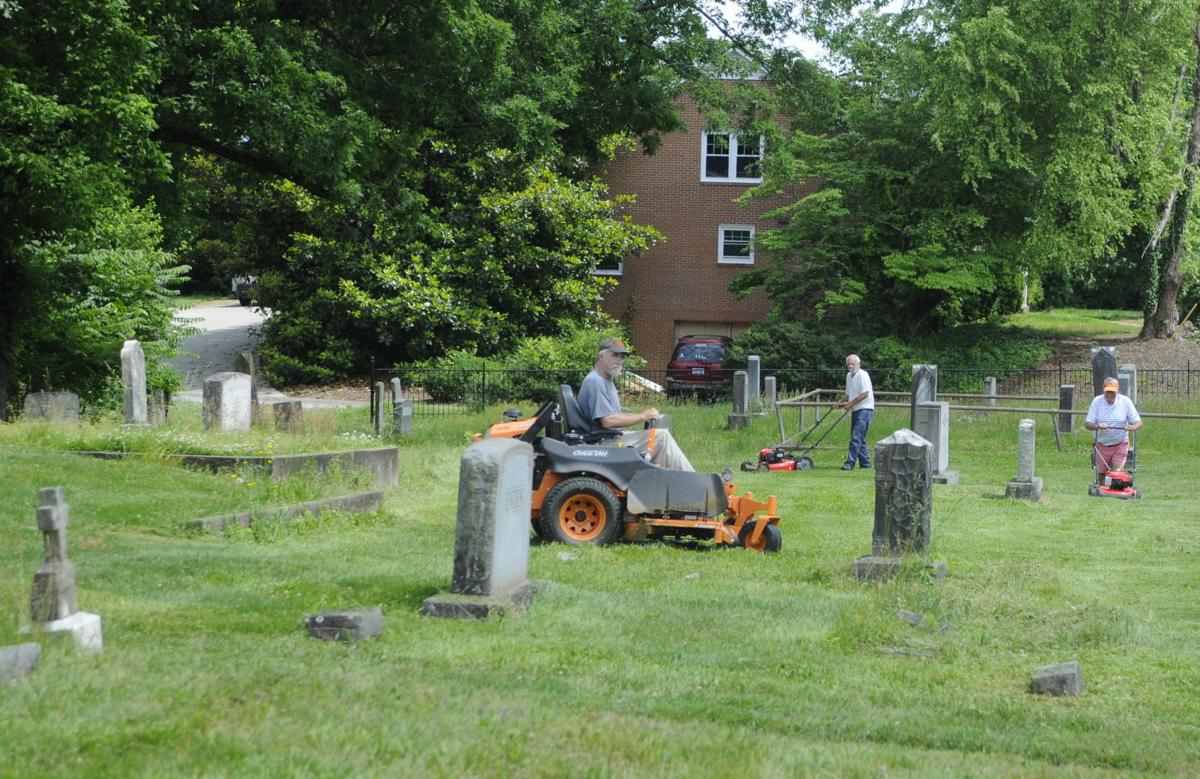 TAKING MATTERS (MOWING) INTO THEIR OWN HANDS Friday in the City Cemetery on Hinshaw Street, North Wilkesboro, are, left to right, Mark Brantley, Mark Bauguess and Neil Cashion Jr. Bauguess' wife died Dec. 1 and is buried in the cemetery and Cashion has numerous relatives interred there. Both said they got tired of watching the grass and weeds just grow taller for well over a month and said they didn't know the town planned to resume mowing next week. Brantley was driving by, knows Cashion and decided to help. Also mowing but not in the photo was Michael Bauguess, son of Mark Bauguess. Cashion said he was serving as North Wilkesboro mayor when the town officially assumed responsibility for the cemetery. He said he tried unsuccessfully to reach someone at town hall before he started mowing. 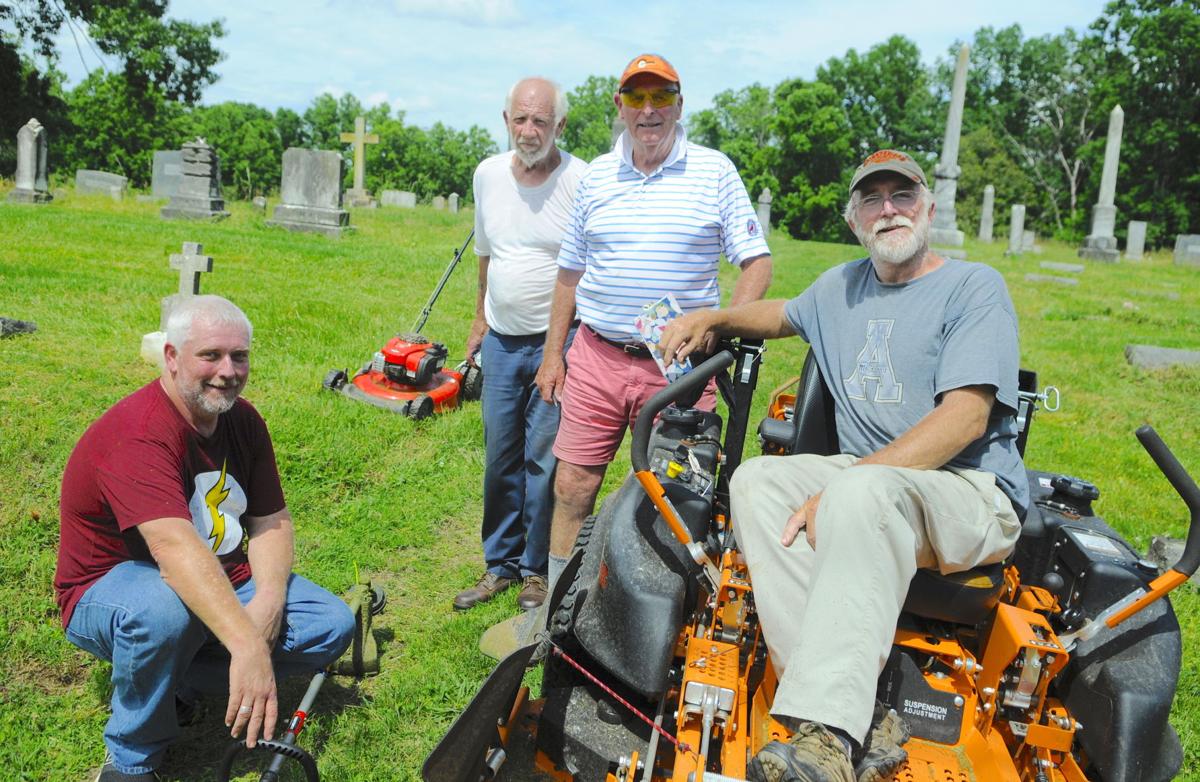 TAKING MATTERS (MOWING) INTO THEIR OWN HANDS Friday in the City Cemetery on Hinshaw Street, North Wilkesboro, are, left to right, Mark Brantley, Mark Bauguess and Neil Cashion Jr. Bauguess' wife died Dec. 1 and is buried in the cemetery and Cashion has numerous relatives interred there. Both said they got tired of watching the grass and weeds just grow taller for well over a month and said they didn't know the town planned to resume mowing next week. Brantley was driving by, knows Cashion and decided to help. Also mowing but not in the photo was Michael Bauguess, son of Mark Bauguess. Cashion said he was serving as North Wilkesboro mayor when the town officially assumed responsibility for the cemetery. He said he tried unsuccessfully to reach someone at town hall before he started mowing.

Town Manager Wilson Hooper said during a virtual town board work session Thursday night on Zoom that the work is being resumed with a “strong public safety posture.”

Speaking figuratively about the status of the virus in Wilkes, he added, “The floodwaters have not crested yet; they’re definitely not receding. This is still a very dangerous situation and we need to keep that in mind."

Hooper said some town employees were told to work at home starting March 30 to “help break the chain of transmission” of COVID-19, the disease caused by the coronavirus. Those “non-essential” workers have received two-thirds of their salaries since then.

He said that when healthy town employees return to their departments, they’ll be subject to safety procedures such as temperature checks, wellness checks, social distancing and use of personal protective equipment (PPE) when interacting with the public.

On April 9, North Wilkesboro suspended collection of yard waste and bulky refuse items and mowing of cemeteries and other public spaces, while continuing roll-out garbage and recycling collection. Hooper said it will take workers “a few weeks to catch up, but they’ll start making a dent on the backlog.”

Hooper said the town’s Smoot Park Pool, which normally opens on Memorial Day weekend, will remain closed through the summer.

“It’s hard to social distance at a pool, so it’s a high-risk area that we can’t in good conscience open up. I think it’s the prudent thing to do, said Hooper, adding that Wilkes Health Department Director Rachel Willard and North Wilkesboro Recreation Director Nelson Martin agreed.

Under Gov. Roy Cooper’s phase two of easing COVID-19-related restrictions, which began May 20 and continues through June 26, indoor and outdoor pools can open at 50% capacity and in accordance with specific public health requirements.

Hooper said the pool closure will make it easier for North Wilkesboro-based Mastin Aquatic Recreation LLC, owned by James “Buster” Mastin, to complete construction of a “splash pad” water play area where the Smoot Park kiddie pool used to be.

Work on the splash pad “has not stopped moving, and slowly some progress is being made,” said Hooper. “We’re hoping in the next few weeks that work can accelerate on it.”

Mastin said some of the delays in the project were partly due to changes the town made in specifications and equipment after a $29,503 grant was received for the project in February 2018. Last summer, the town board voted to have the town attorney consult with District Attorney Tom Horner regarding potential legal action against Mastin. No such action was taken.

Hooper said the Wilkes County Farmers Market, not run by the town but held at the town-owned Yadkin Valley Marketplace on the Central Business District Loop, will reopen after a COVID-19-related safety plan is approved by town staff in consultation with Willard.

“We’re working on a plan and we should be able to let them reopen in a week or so,” said Hooper.

Crystal Keener, director of tourism and the Downtown North Wilkesboro Partnership, said farmers market vendors will likely be separated by at least 10 feet, the public will be encouraged to only have one family member shop at a time, vendors will wear masks, vendor areas will be sanitized, signs encourage social distancing will be put up and there will be no live music or touching of produce.

The farmers market has been open on Saturday mornings and Tuesday afternoons in recent years.

The June 20 concert featuring the Grassabillies and Elovators on the Window World Stage Deck at the Yadkin Valley Marketplace is cancelled.

Hooper said July and August concerts at the Yadkin Valley Marketplace are cancelled. He said no roads will be closed or other accommodations made for mass gathering this summer.

Hooper said in the press release that playgrounds, picnic shelters, sports courts, skateboard parks and all other recreational amenities that accommodate mass gatherings remain closed, with no reopening date mentioned.

No chickenques will be allowed this summer at Memorial Park or other town facilities this summer.

The festival is always on the first Saturday in October in downtown North Wilkesboro. Keener said the Ruritan club is waiting to learn state restrictions on crowd size then and will likely make a decision on the fate of the event by July.

Debi Davis, Brushy Mountain Ruritan Club president, said Saturday that the 2020 Brushy Mountain Apple Festival is still on and the club has been accepting vendor applications for it since October 2019. She said a vendor application was accepted Friday and that it's incorrect to say the club is waiting to make a decision on having the event. Davis said the club's members "are still planning and proceeding with the 2020 Apple Festival." She said she confirmed all of this with the club's apple festival committee.

The apple festival website said current information from local government officials is that state and local restrictions impacting the event should be lifted by the end of June, but if not vendors can get a full refund or reserve a booth space for the 2021 festival.

The board also approved in principle an expansion of eligibility for the Wilkes Small Business Recovery Program. Eligible now are businesses employing as many as 25 people full-time instead of only those with one to 10.

The town board allocated $30,000 to the COVID-19 recovery program after it was started by the Wilkes Economic Development Corp. in early May. The EDC raised over $200,000 to allocate grants to more than 100 small businesses through the program.

Commissioner Debbie Ferguson, EDC board member, said 39 applications were received as of Thursday, with each eligible to receive $2,000 for rent and other fixed expenses. The EDC is “making plans in case all the money is not requested, and how to sensibly utilize those funds for small businesses,” said Ferguson.

Over the past month, Wilkes Emergency Medical Services (EMS) has handled every first responder call in North Wilkesboro because EMS is better equipped, including with more PPE, than the fire department, said Hooper.

The EMS “workload has been huge and they’ve been working heroically,” he added.

Hooper said Town Hall will remain closed to walk-in traffic and town board meetings will continue being held virtually on Zoom.

The commissioners agreed by consensus to let the town planning board and board of adjustment hold in-person meetings, likely at the Stone Center for Performing Arts off Cherry Street, with safety measures in place.

Hooper explained that it’s challenging for those boards to hold virtual meetings because of the need to obtain consent from all parties that have standing in the matters, such as adjacent property owners.