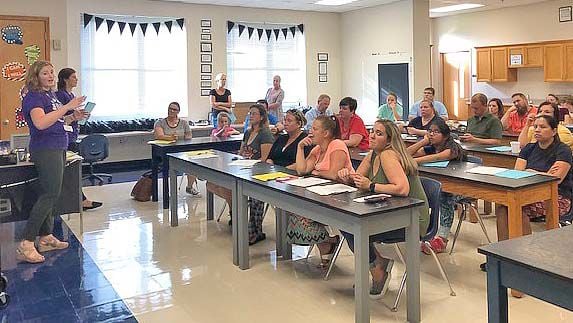 Orientation and open-house sessions held this month were designed to ease the challenging move from elementary to middle school, but the transition actually started last year.

In the 2018-19 academic year, administrators and counselors from the four Wilkes County middle schools visited their respective feeder elementary schools to share information and answer questions.

Last spring, rising sixth-graders visited the middle schools they will attend to familiarize themselves with the campuses, meet teachers, ask questions and learn about exploratory class options in their first year of middle school.

“They must adjust to having more than one teacher, which will be different after having one teacher each year in the classroom since kindergarten. Establishing new friendships with peers and building new relationships with multiple teachers can be a challenge for newcomers to middle school.”

She said that students must also learn how to operate successfully within a larger system by obeying rules and following the school’s routines. “This can become challenging as children are striving to become more independent,” she added.

Burchette said many residents of the community pitched in during the school’s open house nights for all three grade levels. Macedonia Baptist Church in Ronda provided ice cream at the end of each open house at East Middle.

The seventh-grade open house was also Monday night and eighth-graders had their session on Wednesday night at East Middle.

Rodney Graham was the principal at Wilkesboro Elementary School for two years before becoming principal at Central Wilkes Middle School this year.

“Having served in an administrative position at the elementary, high school, and now the middle school level, I do not believe there is a significant difference in when it comes to meeting the needs and expectations of the school community,” he said. “All school stakeholders want to know that they are valued, heard and that you have their best interest at heart.”

Graham continued, “Be it elementary, middle or high school, it has been and remains my goal every day to give students, parents and staff the tools and opportunities to be successful, to inspire them through both words and actions and to help them believe in themselves.”

During an orientation session at Central Wilkes Middle on Aug. 15, rising sixth-graders participated in a scavenger hunt on their grade-level hall to help them learn more about the middle school experience and all it has to offer.

Open house at Central Middle was held Tuesday with a staggered schedule for grade levels. The sixth-graders were first to have an hour-long meeting with teachers and staff, followed by seventh-graders and then eighth-graders.

West Wilkes Middle Principal Pamela Huffman said rising sixth-graders and parents were nearly the only people at the school during a two-hour “Jump Start Camp” on Tuesday.

Students and parents were separated into different rotating sessions and student ambassadors led them to different sessions at the school.

Students were split into groups of 30 and rotated through 20-minute sessions to learn how to read a class schedule, use a combination lock and review positive behavior and academic expectations. “One of the biggest challenges new students face is learning how to open a combination lock,” said Huffman.

Huffman said West Middle teachers and administrators are encouraging parents to become involved in the middle school experiences of their children.

Parents had opportunities to meet and join the school’s athletic boosters, PTO, band and community organizations. Each parent was asked to write words of encouragement to his or her child on a “leaf,” which will be placed on a “gratitude tree” outside the assistant principal’s office.

A school system interpreter was there to translate presentations for parents with limited English language skills.

“We host students in the spring of their fifth-grade school year for tours given by our student leaders to help them understand the wonderful opportunities they will have while in middle school and to generate excitement about becoming a middle school student,” said Freeman.

Also in the spring, North Middle sixth-grade teachers and school counselor often are invited by feeder school PTOs to talk about transitioning to middle school. Freeman said this “allows us to form important partnerships with parents early to alleviate any anxieties parents and students may have about leaving elementary school.”

North Wilkes Middle hosted a sixth-grade orientation and “parent academy” on Tuesday. “This is always a very successful event where students and parents are able to participate in activities that help them learn about becoming a Jaguar and develop strategies that will lay the foundation for success in grades 6-8,” said Freeman.

Freeman said the school was fortunate to have 72% of incoming sixth-graders and their families participate in the annual event on Tuesday.

A shower or two around the area in the evening, then partly cloudy overnight. Low 46F. Winds light and variable. Chance of rain 30%.

Now is time to act and pray for nation

Roadside litter has become even worse