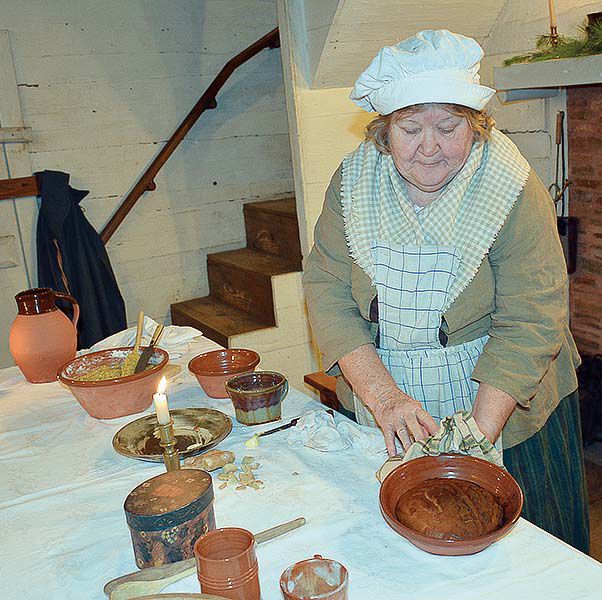 Mary Bohlen takes her finished black cake and puts it on a table for final preparations. 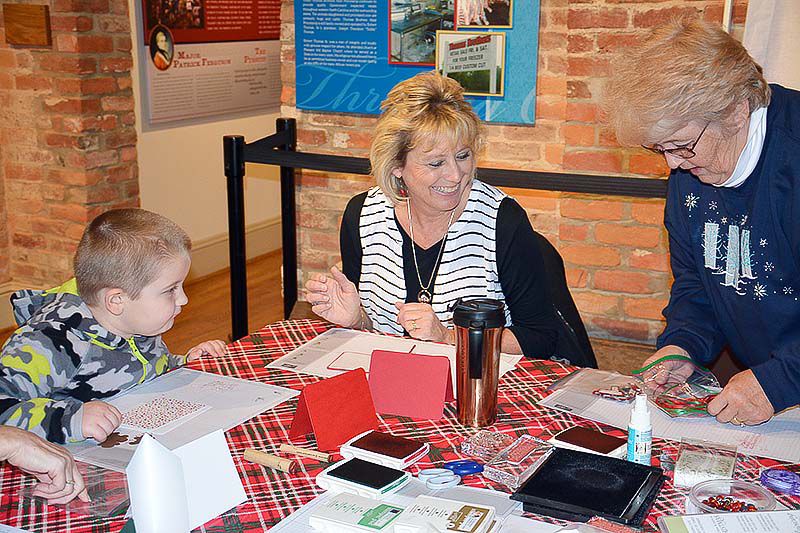 MADDOX CANNON, left and his grandmother, Renee Lewis, center, watch as Phyllis Moulton, right, a member of the Wilkes Stamp Club, explains how to make Christmas cards on Saturday at the Wilkes County Heritage Museum. 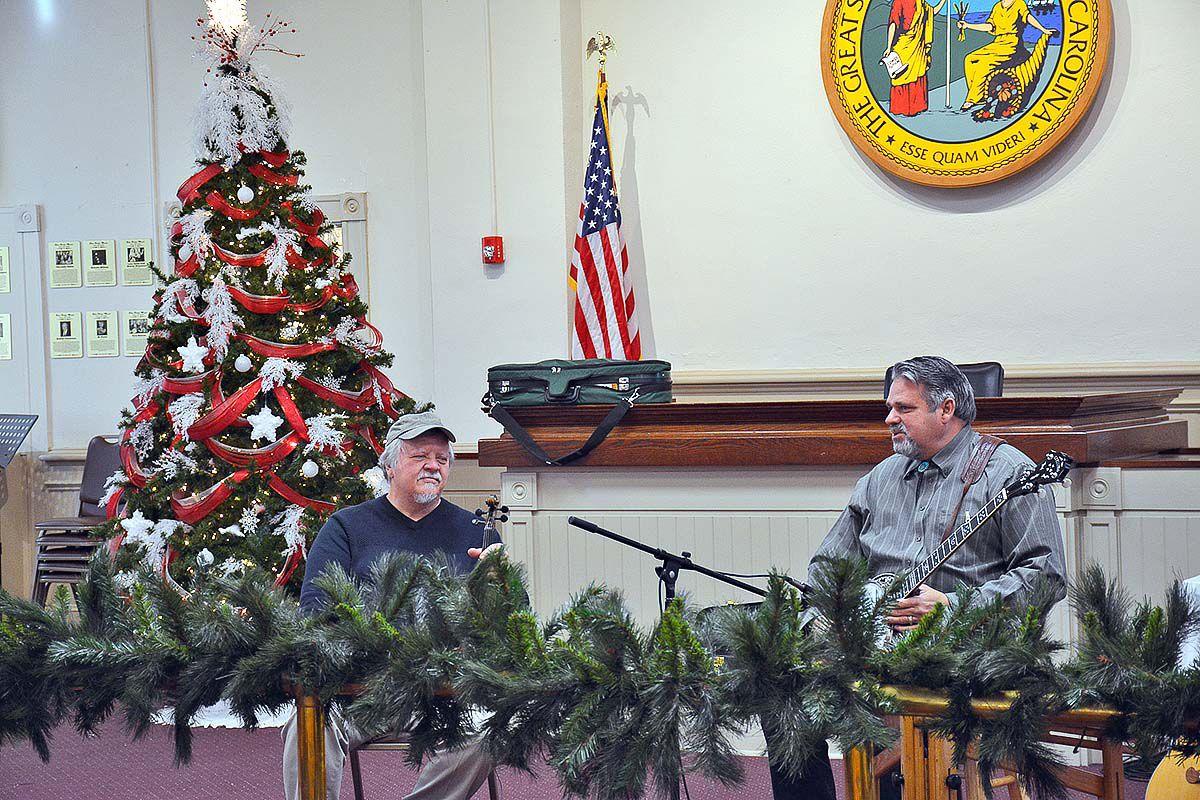 R.G. ABSHER, right and Bob Kogut, left, provided music on the second floor of the Wilkes Heritage Museum in the former courtroom. Also performing was the musical cast of “Beautiful Star: An Appalachian Nativity.”

MARY BOHLEN, a volunteer heritage cook during the Christmas Open House, makes a black cake, similar to a ginger cake, over an open-hearth fire in the Captain Robert Cleveland log home behind the Wilkes Heritage Museum. The recipe or “receipt” is from the handwritten collection of Gen. William Lenoir from the 18th century.

Mary Bohlen takes her finished black cake and puts it on a table for final preparations.

MADDOX CANNON, left and his grandmother, Renee Lewis, center, watch as Phyllis Moulton, right, a member of the Wilkes Stamp Club, explains how to make Christmas cards on Saturday at the Wilkes County Heritage Museum.

R.G. ABSHER, right and Bob Kogut, left, provided music on the second floor of the Wilkes Heritage Museum in the former courtroom. Also performing was the musical cast of “Beautiful Star: An Appalachian Nativity.”

The below freezing temperatures this year made a roaring fire a necessity in the unheated and centuries old log home, located behind the heritage museum.

Bohlen started the fire before the 10 a.m. beginning of the open house and then began mixing ingredients for a “Black Cake.”

The recipe or “receipt” came from the handwritten papers of Gen. William Lenoir of Wilkes who was an American Revolutionary War officer and prominent statesman in the late 18th century and early 19th century.

She used only ingredients, which would have been available during Lenoir’s era such as molasses, sugar, butter, sour cream, made by hand; farm fresh eggs, unbleached flour, ginger and soda.

“Food is an excellent way to teach history especially when you weave it into different time periods,” said Bohlen.

“It gives you an appreciation for what the pioneer’s life was like on the frontier. It was very hard… many things had to come together for even baking a cake to be successful,” pointed out Bohlen.

A sturdy fireplace for a good fire, iron pots and good wood such as oak, maple or hickory were some of the first steps. Bohlen placed hot coals from the fire on the hearth, mixed the ingredients and then cooked the cake in an iron Dutch oven.

No time or temperature was suggested for baking because there was no way to know how hot the coals were. Instead Bohlen checked the cake frequently and also smelled it to ensure the cake did not burn.

She pointed out the molasses, sugar and ginger were not easily attained in the western N.C. frontier of the 18th century. Those ingredients would have been imported from the Caribbean and shipped to Charleston, S.C., and then sent 200 miles northwest to the Moravian community in Forsyth County and onto what is now Wilkes.

The necessary travel for the ingredients made the cake an expensive treat and a rare one for families on the frontier, emphasized Bohlen.

“Allie (Cleveland, wife of Robert) was on the frontier of the Blue Ridge and didn’t have access to supplies available on the coast,” said Bohlen.

The Robert and Allie Cleveland home was originally constructed in the Purlear community and moved to its current location in 1986. Cleveland was in a local militia regiment commanded by his brother, Col. Benjamin Cleveland at the Revolutionary War Battle of King’s Battle in 1780.

The black cake, named because of the molasses, was only baked on special occasions, such as Christmas, which was celebrated differently than we observe it today, said Bohlen.

“It was more of a holy day, without gifts, but with merriment, good food, and much visiting of neighbors.”

Bohlen lives in Purlear and has participated in historical open hearth demonstrations in Wilkes and throughout North Carolina. These include Latta Place in Charlotte, Fort Defiance, Whippoorwill Academy, both in Ferguson, James K. Polk birthplace in Charlotte, Charles B. Aycock birthplace in Fremont, Duke Homestead in Durham, Guilford County Courthouse in Greensboro, Mabry Mill on the Blue Ridge Parkway, Tatum House in Boone, Foxfire, Ga. and more.

She is also a regular demonstrator for Overmountain Victory Trail events in Wilkes.

Bohlen has been involved with historical events and demonstrations since the 1980s when she took a class on building a log cabin at Central Piedmont Community College in Charlotte. After building the one-room cabin with the class and completing a course on open hearth cooking at the Atlanta Historical Society, Bohlen was hooked.

She has continued to pursue her love of history and making it as accurate as possible through teaching and museum jobs in North Carolina. Her positions have included teaching history in Charlotte and serving as the coordinator for the Tar Heel Junior History program for the N.C. Museum of History in Raleigh and the Iredell Museum of History.

The museum and old jail were also open and decorated for the season during the open house. Light refreshments were offered throughout the day in the main hall.

The Wilkes County Stamp Club taught visitors how to make their own Victorian Christmas Cards throughout the open house also.

The museum gift shop was open and book signings were presented by Daphne Stephens Petrey and Tom Perry.

This is the 11th year the Christmas Open House has been held, said Jennifer Furr, executive director for the Wilkes Heritage Museum.

She said the event started as a tea on a Sunday afternoon near Christmas in the Old Wilkes Jail and Captain Robert Cleveland log home. The open house with expanded events began once renovations turning the Wilkes County Courthouse into the heritage museum were completed in November 2005.