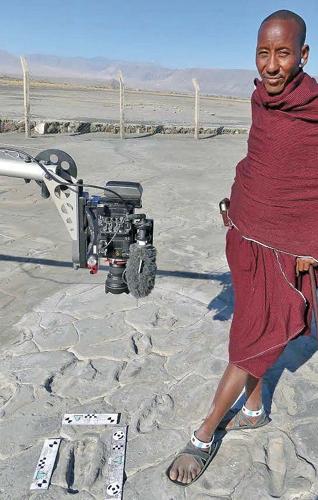 Kongo Sakkae, a tribesman in Tanzania, stands beside a site he discovered that is the largest assemblage of ancient human footprints in Africa. 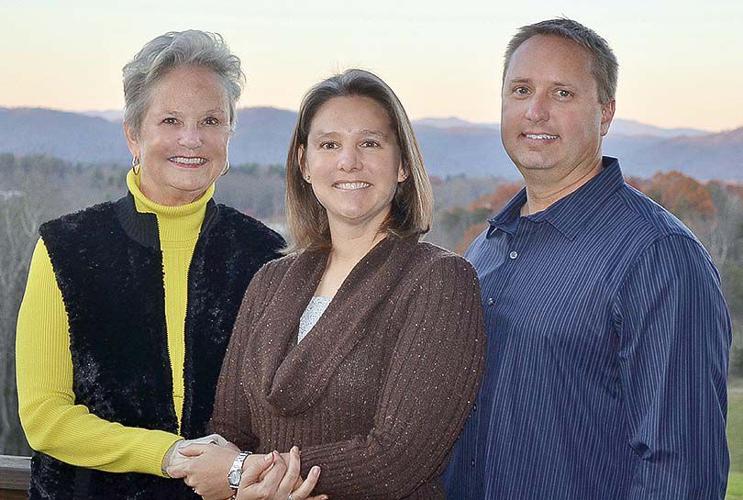 Dr. Cynthia Liutkus-Pierce, center, stands with her mother, Carol Liutkus, left, and her husband, Mike Pierce, at their home in Millers Creek.

Dr. Cynthia Liutkus-Pierce of Millers Creek is a geology professor at Appalachian State University in Boone. She was recently inducted as a fellow in the National Geographic Explorers Club and travels to Africa to conduct research on ancient environments that our early human ancestors lived in.

Kongo Sakkae, a tribesman in Tanzania, stands beside a site he discovered that is the largest assemblage of ancient human footprints in Africa.

Dr. Cynthia Liutkus-Pierce, center, stands with her mother, Carol Liutkus, left, and her husband, Mike Pierce, at their home in Millers Creek.

Children sometimes flip through National Geographic magazines just to look at the photos, but not Dr. Cynthia Liutkus-Pierce when she was growing up.

As a little girl, the yellow-bound magazines filled with awe-inspiring pictures of a planet brimming with wildlife, mysterious lands and their inhabitants proved to be more like a photo album of her life to come.

Born and raised in New Jersey, the self-proclaimed tomboy grew up collecting shark teeth and rocks.

“I was really lucky to grow up in an area where there were so many museums and educational opportunities,” said Liutkus-Pierce. “My mom was instrumental in nurturing my love of science and the outdoors. We were always doing something as a family that helped feed my sense of adventure.”

Carol Liutkus said she realized her daughter’s love for rocks and anything related to earth science was genuine after hauling coolers full of rocks and shells home from their beach trips.

“She would even play for hours with the vermiculate in my potting soil,” said Liutkus. “It simply fascinated her. I could tell from the very beginning she had great things ahead of her.”

Flash-forward to today, Liutkus-Pierce, 41, of Millers Creek has been a geology professor at Appalachian State University in Boone for 12 years. She was recently inducted as a fellow in the National Geographic Explorers Club.

Founded in 1905, the prestigious Explorers Club honors the best-of-the-best in research promoting scientific exploration and field study through funding and more.

Known for her work in the field of sediments and sedimentary rocks, Liutkus-Pierce said the environments in which the ancestors of humans lived and how those dynamic environments may have influenced human evolution are her real passion.

When people ask her what she does for a living, Liutkus-Pierce said she tells them she is an educator first and foremost.

“When you start rattling off words like paleontology and stratigraphy you can start to lose people really fast— especially those who aren’t in academia,” she said laughing.

Liutkus-Pierce joined the Geology Department faculty at Appalachian in 2005 after teaching for one year at Bucknell University as a visiting assistant professor. She currently teaches Intro to Sedimentology and Stratigraphy, Evolution of the Earth and several introductory courses and labs.  She was inducted into Appalachian’s Academy of Outstanding Teachers in 2016, and was awarded the UNC Board of Governors Appalachian State University Excellence in Teaching Award for 2017.

“I absolutely love teaching and it’s easily my favorite part of my job,” she said. “I’m lucky, I even get to take students to the field in Africa with me. A few years ago, I took an undergrad (Kevin Bynum) to Kenya, and I’ve also taken two other undergrads to Tanzania. It’s amazing to see someone experience Africa for the first time.”

According to her husband, Michael Pierce, a lieutenant with the Wilkes Sheriff’s Office, once worried his wife might be a bit too “nerdy” when they first met, said now, he considers her “nerdiness” to be one of her greatest assets.

“She is absolutely amazing,” said Pierce, who admits being a bit intimidated at times by his wife’s academic achievements when they first started dating. “I’d never dated a professor before. But she proved really early on how down-to-earth she was and that she wasn’t afraid to get a little dirt on her hands. After our first date, a friend of mine told me she was the one.”

Pierce credits his wife with introducing him to a host of new, exciting cultures and experiences during a recent trip to Africa last summer. The coupled traveled with a film crew from Nova Productions (Canada) that was documenting her work for an episode titled, “The Secret Lives of Lakes.”

“I could have never imagined in my life traveling to Africa until I met her,” he said. “I now know why her students love her as much as they do and nominate her for so many awards. She takes the hardest, most complex things and can explain them in a way—or dumb it down as I like to say—that I understand. When I look at a rock, I just see a rock. But to her, a rock is something way more than I could ever imagine. I can’t even begin to tell you how proud I am of her.”

“I was totally blown away by my experience in Africa,” he said. “Seeing first-hand my wife working on a project that is so important to her and then be recognized for all she has done was by far the most exciting and humbling part of the trip.”

One giant step for mankind

Since 2009, Liutkus-Pierce has led the research studying and cataloging what some scientist hail as a “spectacularly rare find” of well-preserved human footprints left in the mud along the southern shore of Lake Natron. The footprints are likely 12,000-20,000 years old.

With National Geographic Explorer funding her research in Tanzania, Liutkus-Pierce assembled a team of geologists, archaeologists and anthropologists to excavate the site first discovered Kongo Sakkae, a tribesman in Tanzania.

Sakkae found some of the footprints prior to 2006, but news of the site didn’t garner the attention of scientist until 2008.

“Kongo literally stumbled upon these human footprints in an ash layer near his village while he was tending his goats and cattle,” explained Liutkus-Pierce. “I was sitting in my office at the college when I got a call from a colleague Jim Brett, who was working in East Africa. He told me he thought they’d come across some amazing hominid footprints.”

Liutkus-Pierce glanced at her calendar: It was April 1. Half worried her friend was joking, she said she told him, “Jim, I’m going to need you to call me back and say this again tomorrow.”

Brett was adamant. He was not joking.

“There are over 400 individual human footprints preserved, from about 20-22 different individuals ranging from at least one baby to children and adults. You look down and there are actual footprints. There is no denying what they are or that they were made by humans. There are also animal prints made by zebras and buffalos preserved nearby too. By examining the footprints, we can tell individual trails and who was walking where, if they were walking or running, who went first, etc.  It’s pretty amazing.”

Known as the “Engare Sero footprint project” the prints are nine miles from the volcano the Maasai call the “Mountain of God.” They cover an area about the size of a tennis court and are imprinted into the dark gray mudflat of the Engare Sero, on the southern shore of Tanzania’s Lake Natron.

Nova Productions (Canada) will highlight her work on the Engare Sero footprint site in an upcoming film called, “The Secret Lives of Lakes.”

From here to there

In an article about the footprints published in National Geographic on Oct. 10, 2016, Liutkus-Pierce noted that human origins are of huge interest to her.

“Where we came from, and why we are who we are,” she said.

She said she isn’t drawing a line between creation and evolution.

“I have a test question I like to pose to my students: the theory of evolution explains the origins of life. True or False?” she said. “False. Evolution explains how organisms change through time, not how life originated. So, the dichotomy of ‘evolution verses creationism’ is inherently false.”

Liutkus-Pierce believes human beings are more similar than they are different and that humans are all descendants of early African hominids. “Not chimps or apes—that’s another common misconception about evolution. Humans did not evolve from chimps or apes. We share a common ancestor with apes, but our evolution was not a straight line from ape to human.”

“I think that is a difficult idea for some people to understand. But the “all from one” idea isn’t that foreign. It’s the same idea in the Bible. We just need to extend the analogy and see our similarities and commonality, rather than our differences.”

Liutkus-Pierce is currently working as lead geologist on a project that examines the environments in which the primate ancestors of humans lived about 17 million years ago in Kenya.

Scattered thunderstorms during the morning becoming more widespread this afternoon. High around 85F. Winds light and variable. Chance of rain 80%.

Intervals of clouds and sunshine. A stray shower or thunderstorm is possible. High 84F. Winds light and variable.

A few clouds from time to time. Low near 70F. Winds light and variable.

Variable clouds with thunderstorms, especially during the evening. Low near 70F. Winds light and variable. Chance of rain 60%.