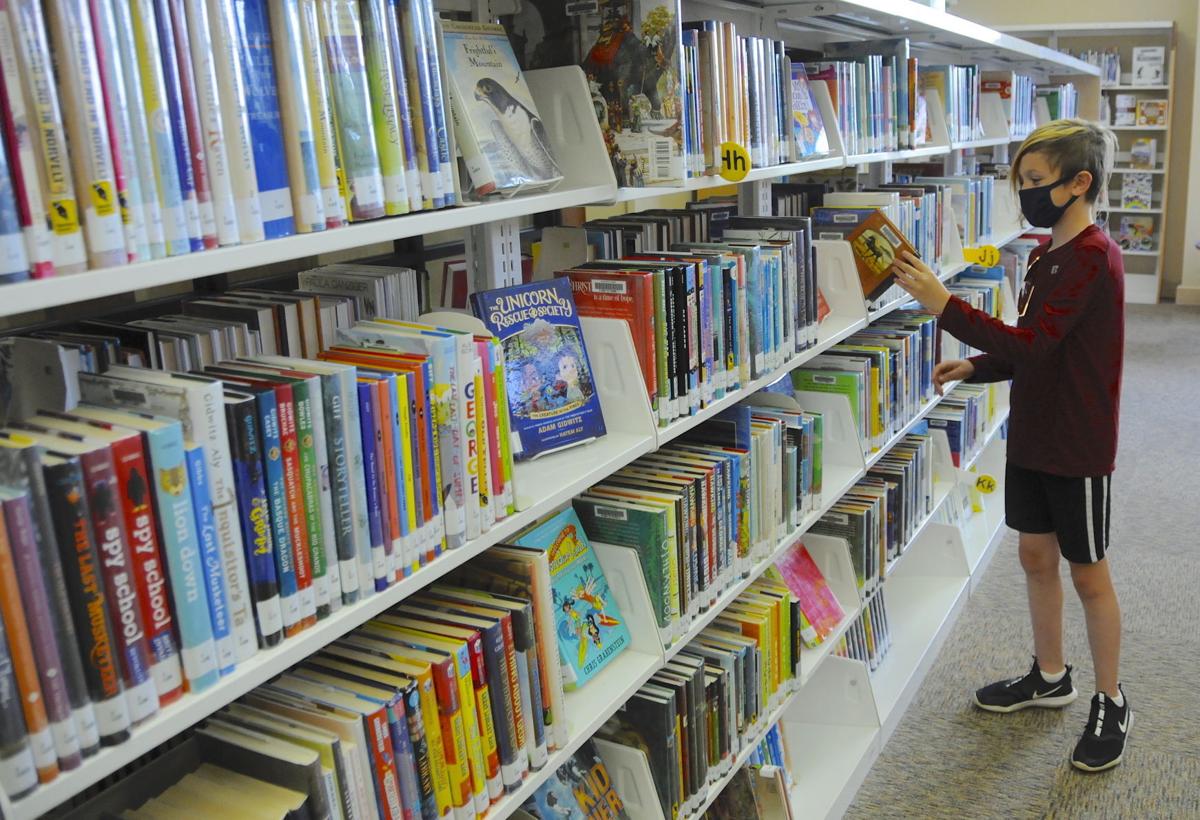 Micah Newby of Wilkesboro was in the children’s section of the Wilkes County Library on Friday afternoon looking for books on tennis. 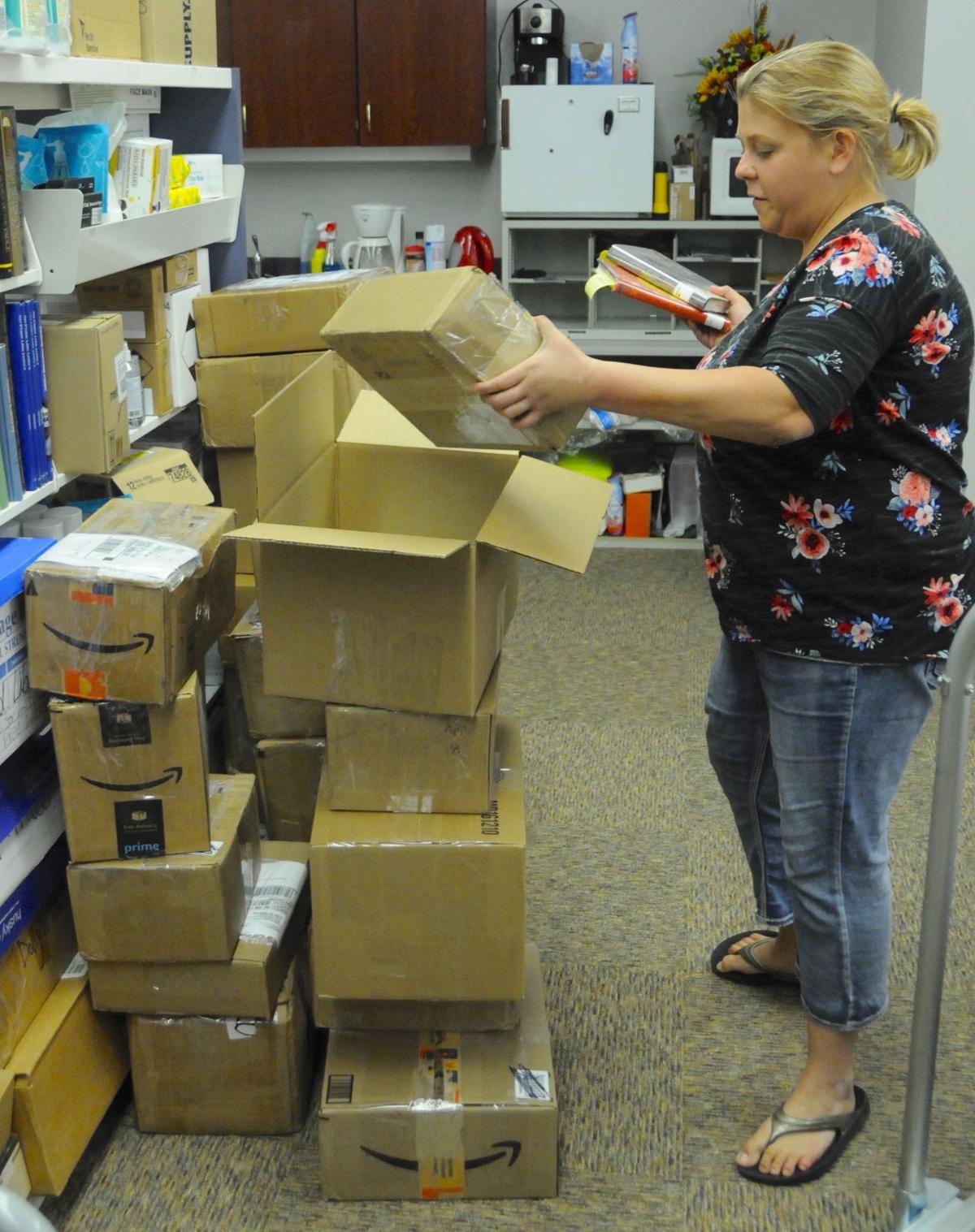 Kelley Gruffin of the Wilkes County Library staff packs books requested by patrons of other public libraries in North Carolina through N.C. Cardinal on Friday. Gruffin said about 300 Wilkes library books per week are put on hold for shipment across the state by UPS through Cardinal. Wilkes library patrons can request books from any of the 50 participating libraries statewide.

Micah Newby of Wilkesboro was in the children’s section of the Wilkes County Library on Friday afternoon looking for books on tennis.

Kelley Gruffin of the Wilkes County Library staff packs books requested by patrons of other public libraries in North Carolina through N.C. Cardinal on Friday. Gruffin said about 300 Wilkes library books per week are put on hold for shipment across the state by UPS through Cardinal. Wilkes library patrons can request books from any of the 50 participating libraries statewide.

The Wilkes County commissioners created a committee to study and make recommendations on library services instead of initiating a withdrawal from the Appalachian Regional Library System during their May 4 meeting.

Applications are being accepted from people interested in serving on the committee. Forms for applying are at https://wilkescounty.formstack.com/forms/board_application.

Commission Chairman Eddie Settle said the commissioners will vote on the library research committee’s members at their May 18 meeting.

The May 4 meeting was the board’s first in its normal room in the County Office Building and also the largest in attendance since the pandemic began. They’ve been meeting at the County Ag Center to allow more distancing.

Most of the 30 or so people in the audience were there due to “Notice to withdraw from the Appalachian Regional Library System” being an action item on the meeting agenda. Most appeared to support not leaving.

Settle had this item placed on the agenda. He later said in an interview that he would seek a motion tabling it after receiving calls from people opposed to leaving the ARL.

A woman in the audience asked what prompted the committee’s creation. Settle said it was due to people asking why Wilkes was leaving the ARL, but added that Wilkes wasn’t leaving the regional organization.

Another woman said she was glad to hear Wilkes was staying in the ARL, but added that her initial impression was otherwise. She said she agreed with having more branch libraries because Wilke is a large county.

Settle said the committee might recommend more public libraries in Wilkes, or decide not due to more people being online. Restoring bookmobile service was mentioned.

Sharon Underwood, one of four representing Wilkes on the ARL board, said she didn’t know until now that leaving the regional system was an issue. She said library services in Wilkes are much stronger due to being in a regional system.

“Why are we here, Eddie?” Underwood asked.

Settle said it was because Surry County government budgeted $525,000 for the Northwestern Regional Library System and Wilkes budgeted $693,525 for the ARL this year, but Surry has five libraries and Wilkes has two. All of this money comes back to the respective counties.

Wilkes has the Traphill Library, open two days a week, and the main library in downtown North Wilkesboro.

Surry is in the Northwestern system with Alleghany, Yadkin and Stokes counties and has libraries in Elkin, Mount Airy, Dobson, Pilot Mountain and Lowgap.

The Appalachian system’s only municipal funding from Wilkes is $5,000 per year from North Wilkesboro.

Settle said the committee will be asked to look into operations of the two libraries in Wilkes, the ARL and other regional library systems and libraries across the state and make recommendations on changes.

It will be chaired by Commissioner Casey Joe Johnson, who is on the Wilkes Library Advisory Board. Discussion indicated there will be 10-12 members.

Johnson made a motion to form a committee comprised of educators, librarians, community members, library advisory board members and library users to study options for library services in Wilkes. He said seven people so far agreed to join it, including two Wilkes Library Advisory Board members, two school librarians and current or retired public school professionals.

Settle suggested that Jane Blackburn, ARL director of libraries, be on the committee. He also said the committee would be asked to report back by March 1.

Blackburn said a year is ample time to investigate leaving the ARL and becoming a county department or joining the Northwestern Regional Library System. She said this included learning if Northwestern would add Wilkes.

Blackburn said another issue is the amount of money Wilkes County government is willing to spend to have more branch libraries.

She said the ARL is doing a great job, drawing applause from the audience.

Blackburn added, “But I’m not afraid of looking at the other ways to do it because I want Wilkes County to have the best library system it can have. If it’s with us, good; if not, then God bless you and good luck with whatever you need to do. You need to get all the ducks in a row.”

County Attorney Tony Triplett noted that the interlocal agreement establishing the ARL expires in July 2022, so having the committee come back with its findings in a year is good timing.

Variable clouds with thunderstorms, especially during the evening. Low 67F. Winds WSW at 5 to 10 mph. Chance of rain 50%.