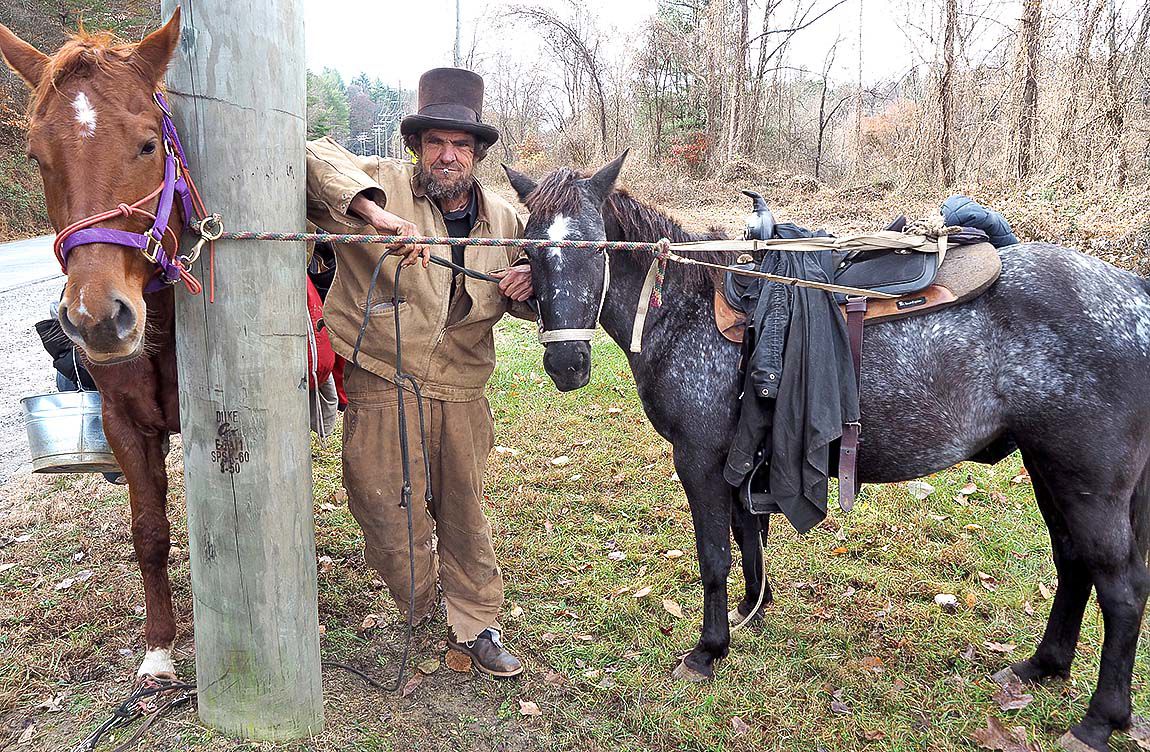 with his horses Red, left, and Luna while en route to Wilkesboro on Tuesday morning, Abe stopped to let the animals feed on grass outside the Ashley Farms store near the intersection of N.C. 268 West and Browns Ford Road. 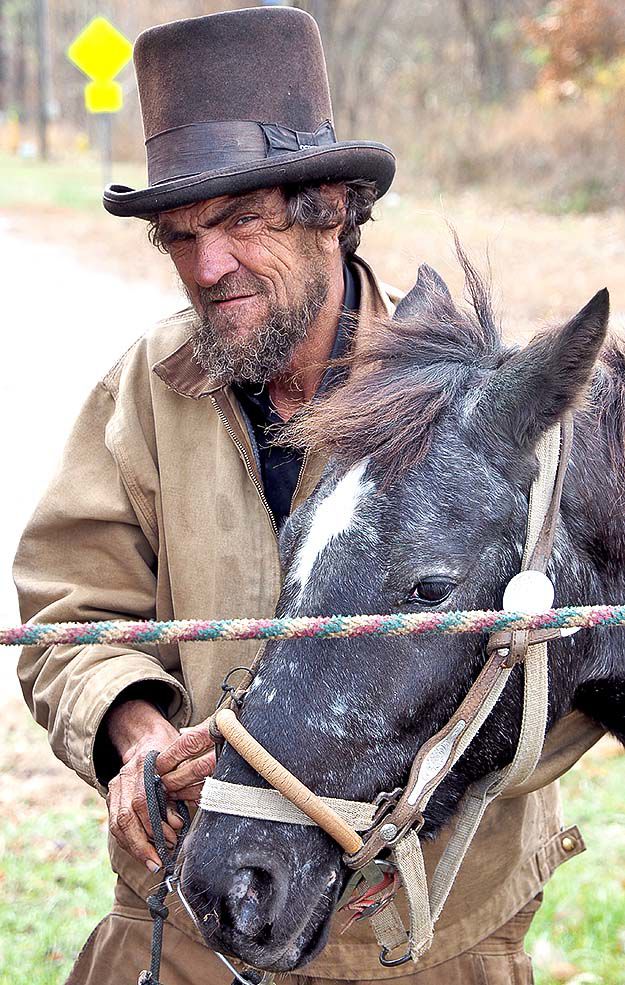 ABE CALLS LUNA his lead, or base, horse, and said he’d be hard-pressed to sell her at any price. “Even though she’s a pain in the butt, I kind of like her.” 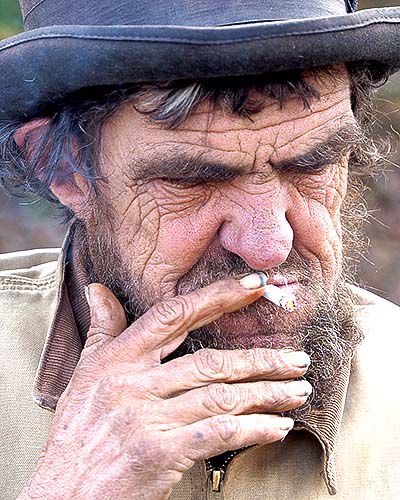 ABE takes a drag from a hand-rolled cigarette Tuesday morning.

with his horses Red, left, and Luna while en route to Wilkesboro on Tuesday morning, Abe stopped to let the animals feed on grass outside the Ashley Farms store near the intersection of N.C. 268 West and Browns Ford Road.

ABE CALLS LUNA his lead, or base, horse, and said he’d be hard-pressed to sell her at any price. “Even though she’s a pain in the butt, I kind of like her.”

He has no home or family, and very little money to his name, but a man who looks strikingly like a famous president counts himself richer than most people he meets on the highways and byways of the central Blue Ridge Mountains.

He goes by Will or Abe and politely declines to share his last name. He claims to be 54 years old, even though decades of hardscrabble living make him look older.

“It’s ‘Will’ if I’m in trouble, but most people call me ‘Abe.’ Depending on what they call me, I’ll know where they know me from,” he laughs.

Most call him Abe because he’s a spitting image of Abraham Lincoln, complete with a dusty black top hat similar to the one that the 16th president of the United States made iconic.

On Tuesday while riding through Wilkes County, he says he was told nine times that he looks just like Lincoln. The beard honors the memory of his late Mennonite wife, he adds.

His father-in-law died last year at age 98, leaving him with no other family. “I’m the last of the Mohicans,” he quips.

Abe was adopted into a large Amish family in Missouri, and grew up without electricity. Ever since he was a young boy, he’s loved horses. “Now, I find horses that people don’t want. That’s what I do.”

He rescued Red, whom he was using as a pack horse Tuesday, after finding him starving in a field. Abe says Red “probably hadn’t had a hand on him in a few years. Look at him now.” He says Red will make somebody a good horse, and it’s his job to find that new owner.

It’s not an easy task, however. The last three buyers who were interested in Red backed out. Sometimes the prospective buyer doesn’t show up, like last week in Marion, Va. Other times, the buyer shows, but has a change of heart. “It’s becoming a theme with me,” he mutters.

Abe makes a small pittance when he sells a horse, giving him the means to survive until he sells another. It’s always a struggle to make ends meet, he admits.

He’s a horse trainer and trader, but don’t call him a horse whisperer. “Nah,” he chuckles, “more like a horse screamer.” When the horse Abe was riding, called Luna, reared back and kicked Red, Abe indeed screamed.

“Hey! Knock it off! She’s being a butt-head,” he exclaims, but still goes over to soothe the horse he calls “my lead.” He adds, “She don’t usually misbehave like that.”

Luna is his base horse, and he would be hard-pressed to sell her. “She’d have to tell me it’d be okay. And the price would have to be obnoxiously high. Even though she’s a pain in the butt, I kind of like her.”

Making his way leisurely through the outskirts of Wilkesboro on the Tuesday morning before Thanksgiving, Abe really has nowhere to go and no one to see. As cars fly by on N.C. 268 West, Abe and his two horses stick out like sore thumbs. Some drivers slow down to stare or take photos with their smartphones.

Abe says he’s killing time until he returns to Tennessee on Dec. 10. He has a place there near Mountain City where he can stay if it’s an emergency—“a buddy of mine lets me stay on his property.”

He has what he calls “base camps” in Todd, straddling the Ashe-Watauga county line, and up above Damascus, Va., but other than that, Abe is like a rolling stone, gathering no moss while traveling year-round with his horses.

Pretty much everything Abe owns is strapped to the back of Red—a change of clothes, red Marlboro sleeping bag he’s owned since 1980, a tent and a propane stove that stopped working earlier that morning. “I’ll just drink cold instant coffee until I get it fixed,” he surmises, not a drop of despair evident in his voice.

He confesses to not being much of a people person, adding that he was earlier diagnosed with an antisocial personality disorder. “But these horses draw me to people, and I have to be social. I had to take something that wasn’t part of me to get me to step up (and talk to people).”

Abe scoffs when asked if he has any plans for Thanksgiving or Christmas. He says he’ll be “wherever I happen to fall and wherever God puts me, because I believe this is God-driven, and unlike most Christians, I live it. You see what I have there (on Red)? There’s nothing there.”

When asked, he says he’s happy most of the time. The life he’s chosen to live is “frustrating, but it’s fulfilling. People stop to help me but they don’t realize that they’re actually getting the help. People step back and say, ‘You’re right—we do need to go simple. Let’s get rid of all the internet and whatever.’”

There’s an emphasis in his voice as he adds, “We have a hard time having a conversation with someone without a phone in hand and whatnot.”

Abe explains, “It’s not what you can get out of the world, it’s what you add to it. Even right now, you’re picking up knowledge and a new idea that you might want to, maybe not ride a horse, but pick up a bicycle or something else.”

Looking east toward Wilkesboro, Abe finishes smoking his hand-rolled cigarette and unties the reins of his horses from a power pole.

“I’m think I’m going to try to head toward town. Nobody has offered me coffee yet.” And, with that, Abe, Red and Luna continue their simple journey.

His name is Wilbur Frost. He chooses not to share his last name because he’s a s*x offender and has been charged with animal abuse. http://www.harnesslink.com/News/Horse-abuser-convicted-on-weapons-charges-87585

A few clouds from time to time. Low 31F. Winds light and variable.