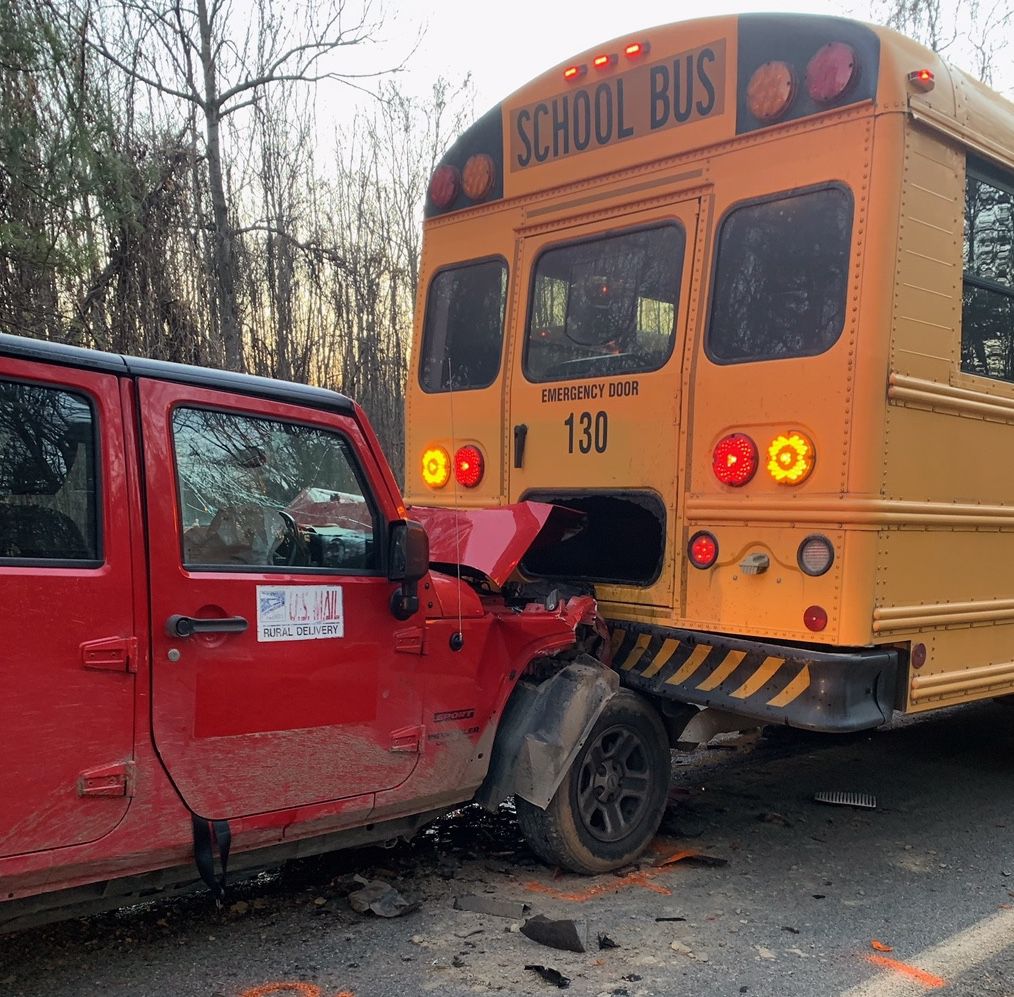 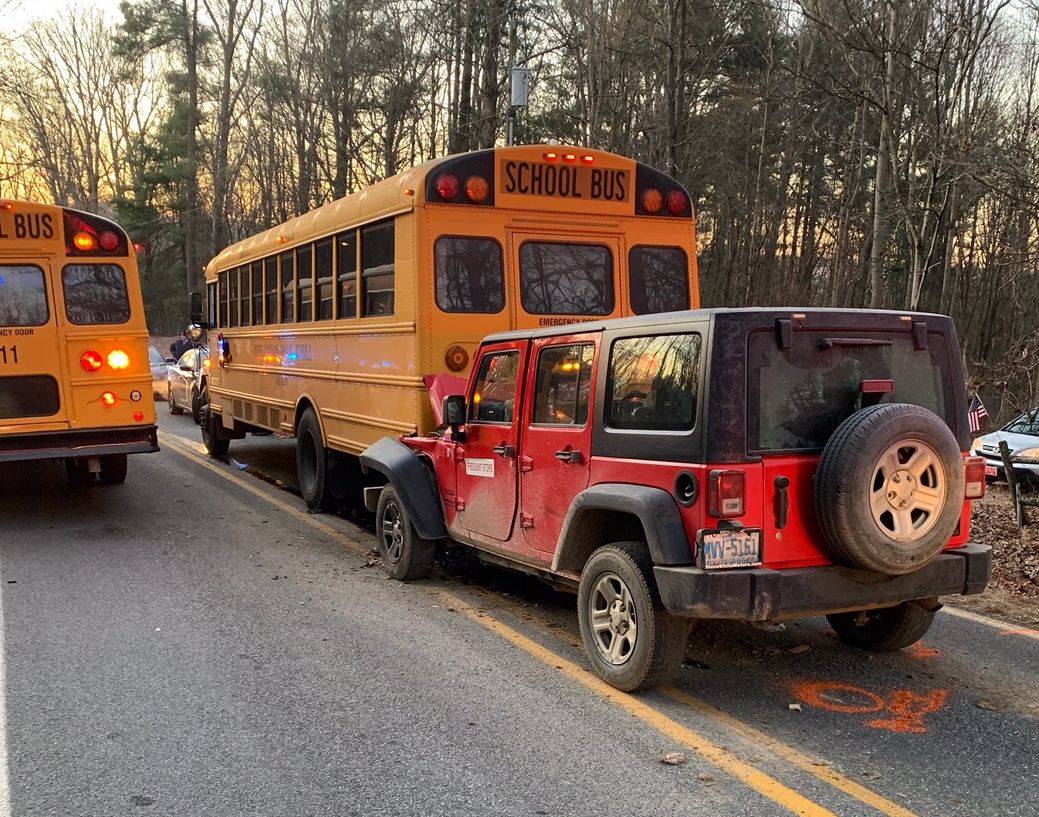 SECOND BUS was driven to the wreck scene to transport students not picked up by their parents and to finish the pickup route of the wrecked bus. 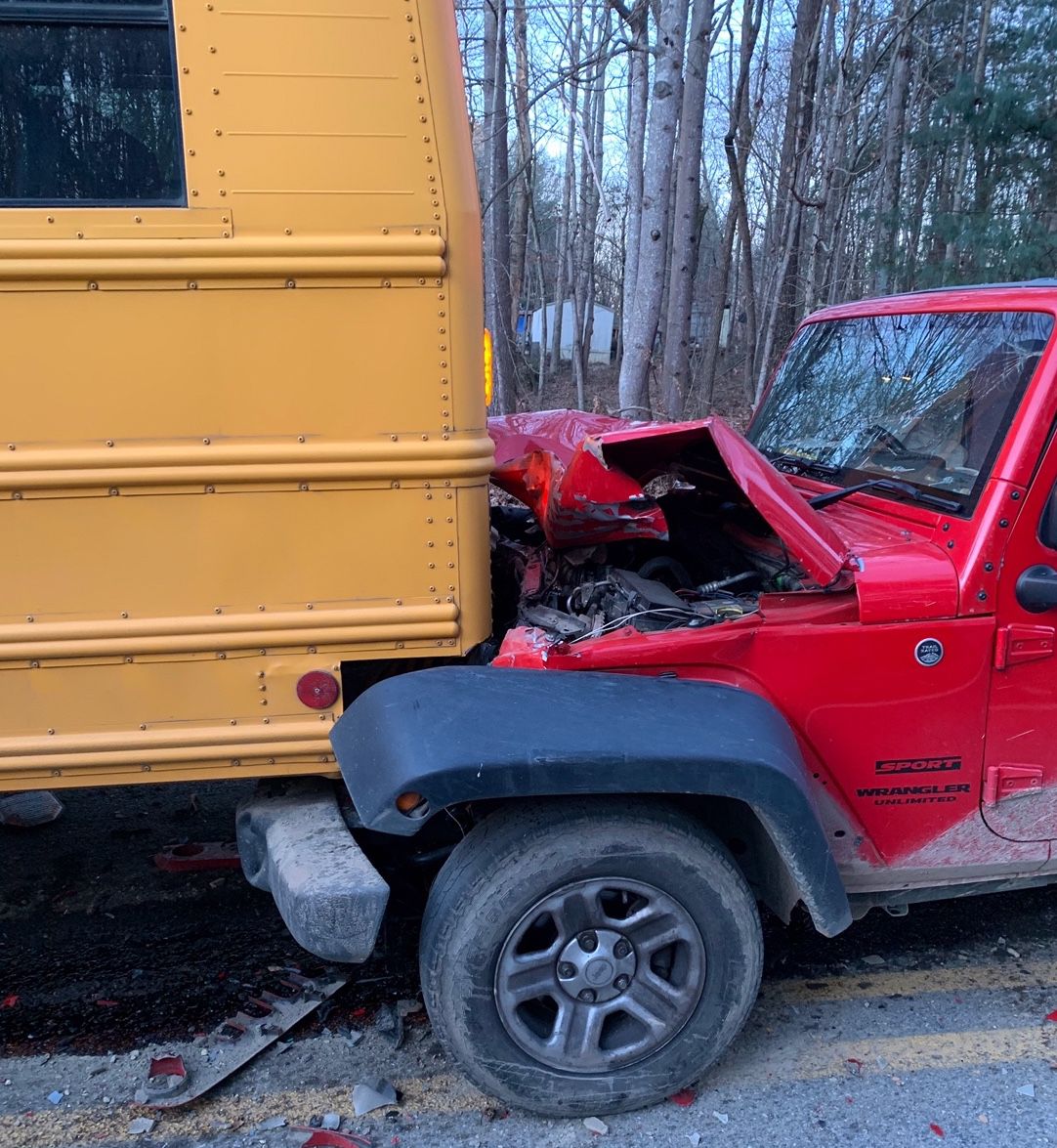 JEEP was heavily damaged in collision with school bus. It was listed as a total loss by the N.C. Highway Patrol.

SECOND BUS was driven to the wreck scene to transport students not picked up by their parents and to finish the pickup route of the wrecked bus.

JEEP was heavily damaged in collision with school bus. It was listed as a total loss by the N.C. Highway Patrol.

A woman received a broken nose when the 2015 Jeep Wrangler she was driving collided with the rear of a Wilkes County School bus on Ruritan Road about 6:40 a.m. Friday in Roaring River, according to the N.C. Highway Patrol.

Trooper J.R. Ratliff identified the bus driver as Jo Ella Lyon, 56, of Ronda, and said Wilkes Emergency Medical Services took her to Hugh Chatham Memorial Hospital for treatment of neck and back pain.

Pennington said the driver of the Jeep, Michelle Blevins, 58, of Roaring River, was taken to Hugh Chatham by private vehicle.

Ratliff said the wreck occurred when Blevins reached down to catch a chocolate pound cake sliding off the Jeep's passenger’s seat and didn’t see that the bus had stopped, with its stop arm and lights activated.

Ratliff charged Blevins with failure to reduce speed. The Jeep had U.S. Postal Service signage on its doors.

Eric Barker, Wilkes County Schools transportation director, said the outcome could have been worse if the Jeep had swerved to the right to avoid the bus because the student was boarding from that direction. “It was a blessing that there weren’t more kids on the bus yet. That bus usually has probably 30-35 students” but the pickup route had just started.

It was bus number 130, which Barker said is based at East Wilkes High School and transports both middle school and high school students.

He said parents were contacted and some came to get their children, while remaining students on the bus were taken to East Wilkes Middle School by a different bus driven to the wreck scene. Barker said that bus then picked up students on the remainder of bus number 130’s route.

The bus and Jeep had just passed Roaring River Ruritan Park when the wreck occurred, said Roaring River Fire Chief Dale Pierce. Pierce said the impact knocked out the glass of a rear door on the bus and pushed rear bumper under the bus.

Ratliff said the Jeep was a total loss and he estimated damage to the bus at $4,000.

He said Deputy Jamie Dowell, school resource officer for the East Wilkes District, and Sgt. Steven Russell, also were there. Both are from the Wilkes Sheriff’s Office.

Troopers C.M. Anderson, R.R Walker and Josh Cockerham from the N.C. Highway Patrol also were on the scene.

Friday was the last day of classes before students in the Wilkes County Schools start Christmas break.