Students from East Wilkes High School enjoy breakfast provided by Mark Cook and his family before joining the virtual event. 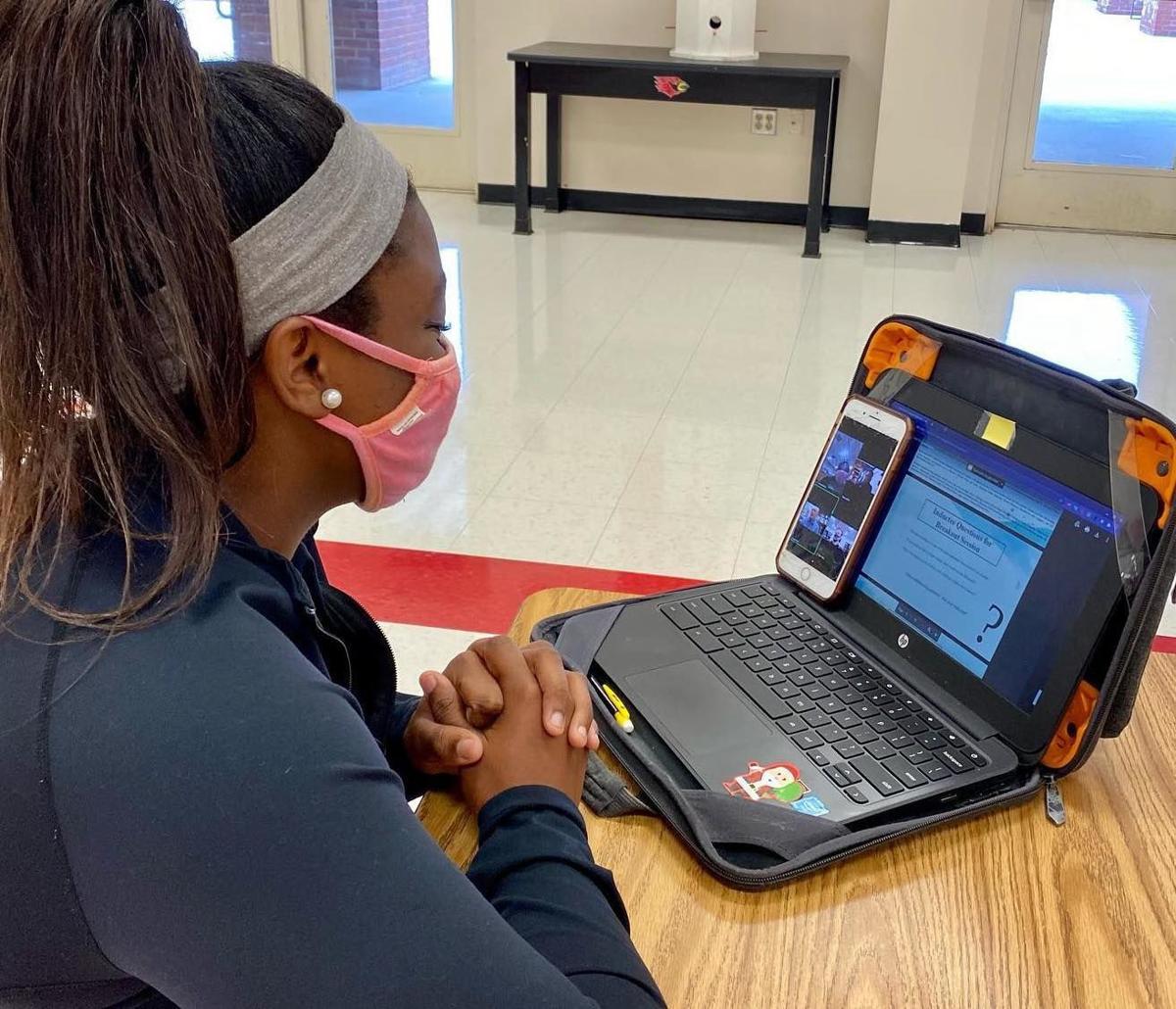 Taniya Martin, a student at East Wilkes High School, chats with an inductee and other students.

Students from East Wilkes High School enjoy breakfast provided by Mark Cook and his family before joining the virtual event.

Taniya Martin, a student at East Wilkes High School, chats with an inductee and other students.

Mark Cook and his family sponsor the annual breakfast in memory of his father, a longtime Wilkes businessman who died in December 2018.

“My father loved hearing the stories of people around us and what they did day in and day out to make our community a better place,” Cook told the students. “In my business, I read a lot of books and reach out to experts in my field, but I’ve never heard anything as valuable as what I’ve heard from this event.”

Cook spoke about the inductees present and encouraged students to be inspired by hometown heroes.

“I truly believe we have some of the best, the kindest, and the brightest in our county, if not the state or the country, right here with us today. I hope you will take away as much from this event today as I do.”

Stone Jr. spoke about the importance of leadership and addressed adapting to change as a leadership trait.

Wilcox, a local businessman, stated, “Change leads to innovation. Don’t be set on any way, adjust to what comes your way and look ahead. Have a good vision to be successful.”

Wilson, a university educator, agreed and said, “Challenges open up so many opportunities. Change can be a great thing.”

Graham-Kerns added, “Always learn to be open minded and flexible.” She is a former Miss North Carolina and now is a dance-teaching artist.

Murphy, executive director of the Health Foundation, spoke about making an early career change to spend more time with her family.

Holbrook, a local businessman and Wilkes Board of Education chairman, said that throughout his career he experienced “a lot of long nights and time away from home, but the bottom line is to get the job done whatever that may take.” Stone Sr. added, “If you have the desire, there’s going to be a sacrifice.”

Lakey, a retired Lowe’s Companies Inc. executive, recalled missing his son’s first birthday because he was out of town working. “Sometimes the job takes over in order to get done what you have to get done.”

Learning from disappointment was mentioned by the inductees.

Wilcox said, “Don’t get discouraged if you’re not getting recognized. Keep following your dream and someone is going to pay attention. Just be ready when your number is called.

Graham-Kerns added, “You have to have tenacious perseverance. Be ready for the next opportunity.” Stevens added to this, “Be a visionary. Know where you want to go.”

Stone Jr. told students they may not be the outgoing one, have a “ra-ra” personality, or get up in people’s faces, but that doesn’t mean they can’t be a leader.

Wilson said, “Some of the most effective leaders have worked their way up. They know what it takes to achieve particular goals.”

Murphy said no leader gets there on their own and having a support system is important.

Stevens, a local businessman, urged students to lead by example. “If you expect those under you to do a certain thing without knowing the end result, you’re not going to get where you want to go.”

Wilcox stated, “Teamwork is what it’s all about.”

Bentley, a retired local dentist, said, “People don’t care how much you know, until they know how much you care. Understand people and their needs, and understand your work and love your work.”

Stone Jr. closed by telling the students, “Just because you live in a small community and a small county doesn’t mean anything. It’s truly amazing what this county has produced and you’re the ones who will produce the next great idea, or the next big company, or the next revolution that will happen just as it’s happened in this county for decades, if not centuries. We’re proud of you.”

Nominations for the 2022 class of the Wilkes County Hall of Fame will be accepted until Jan. 31. Nomination forms are at www. wilkescountyhalloffame.org.

The seventh annual Wilkes Hall of Fame Gala is scheduled May 20, 2021, in the Stone Family Center for Performing Arts.

38°
Showers in the Vicinity

Events may be appreciated more

Parity extends down the ballot

Wearing a mask demonstrates caring about others

How can Woodfield Way repair cost be $1.1 million?