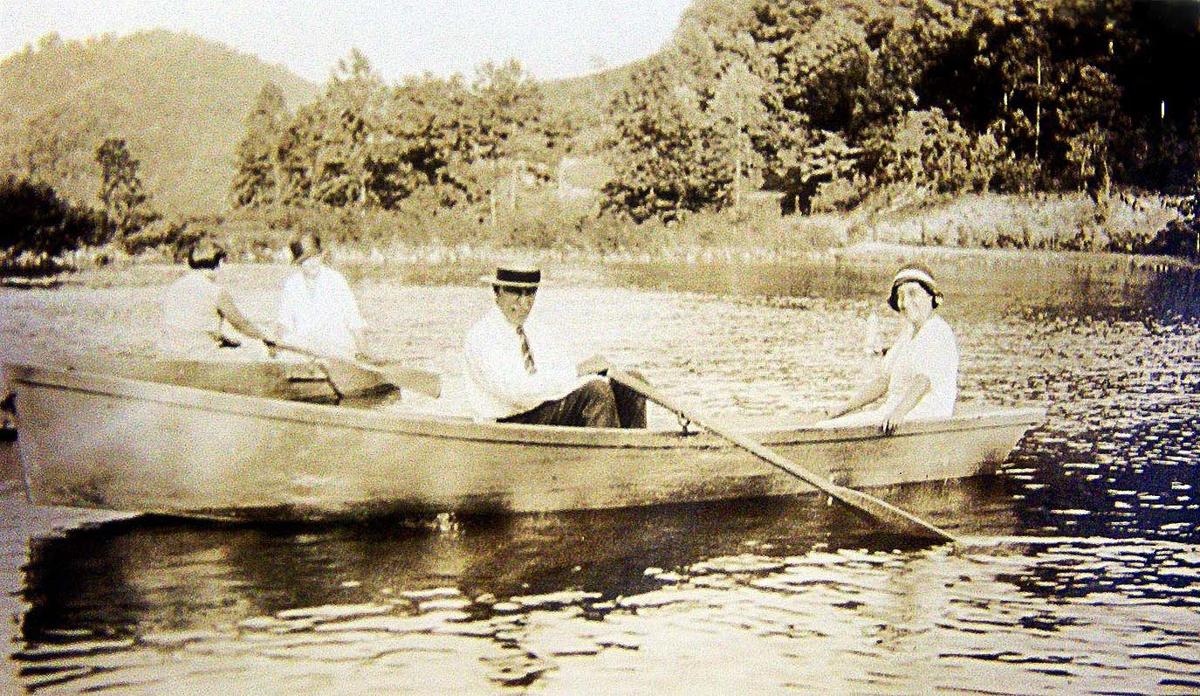 ROWING was among activities enjoyed on Hollywood Lake. Based on the clothing, this photo of a scene on the lake was apparently made in the early 1930s.

This sign pointed the way to the popular attraction. 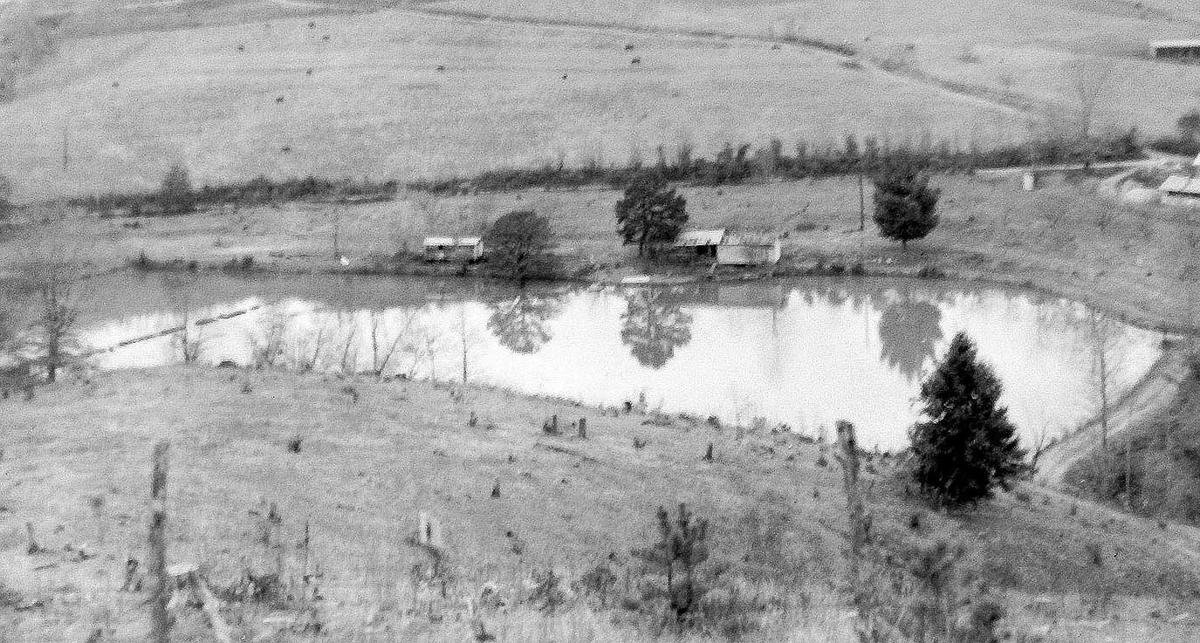 VIEW OF HOLLYWOOD LAKE after its prime shows remains of the boardwalk (far left) that went across the lake to the base of the hill with a large swing. The women’s bath house is to the right of the boardwalk and then the men’s bathhouse, with concession stand attached.

HOLLYWOOD FARM in a photo that appeared in a 1956 Journal-Patriot promotional publication. Note the double-decker chicken houses. The Ritchie home is in a grove of trees at right.

ROWING was among activities enjoyed on Hollywood Lake. Based on the clothing, this photo of a scene on the lake was apparently made in the early 1930s.

This sign pointed the way to the popular attraction.

VIEW OF HOLLYWOOD LAKE after its prime shows remains of the boardwalk (far left) that went across the lake to the base of the hill with a large swing. The women’s bath house is to the right of the boardwalk and then the men’s bathhouse, with concession stand attached.

HOLLYWOOD FARM in a photo that appeared in a 1956 Journal-Patriot promotional publication. Note the double-decker chicken houses. The Ritchie home is in a grove of trees at right.

EDITOR’S NOTE: Second in a series on places that made the Moravian Falls community a center of water-related recreation for many years. A story on Yellow Jacket Lake is next. Readers with photos of Yellow Jacket Lake are asked send them to wjpjule@wilkes.net or make them available for making copies.

A 2½-acre lake in the Pores Knob community with a glamorous name was a popular public destination in the 1930s and 1940s.

It was open to the public for an admission fee before it was leased to the Wilkes Wildlife Club for fishing in 1950.

Visitors rode the swing, consisting of a wooden chair attached by rope to a cable with a pulley, down from the side of a grassy hill to where they plunged into the lake, said Peter T. Ritchie of Seaford, Del. He is the grandson of the late James Ritchie Sr. and Leora Adams Ritchie, who established the farm in the early 1920s.

Ritchie said people crossed the western end of the lake on a boardwalk-like bridge and then walked up the hill to ride the swing. He remembers playing in a shallow area near the bridge intended for children when he was a child.

Helen Lowe Faw grew up near Hollywood Lake and remembers her father, Henry Lowe, saying it was 30 feet deep. She still lives near the site of the lake, off what now is Hollywood Road.

Faw said James Ritchie Sr. was an avid swimmer and added that she used to see him reading a newspaper while floating on his back in the lake—without any sort of flotation device.

She added, “I doubt that it (the farm) was named for Hollywood, Calif., because Mrs. Ritchie was a solid Baptist.” It likely was named for the holly trees that grew in the scenic mountain hollow where the farm was established, said Faw.

Ritchie doesn’t know how his grandparents met, but said his grandmother was a Wilkes County native and his grandfather was originally from New Jersey.

News articles about high school and church picnics, birthday parties and other social events at Hollywood Lake regularly appeared in the Journal-Patriot in the 1930s and 1940s.

In August 1933, an article announced that the annual picnic of the Brushy Mountain Fruit Growers would be held at Hollywood Lake on Aug. 25, with J.W. Snyder of the U.S. Department of Agriculture presenting a program on soil erosion.

Early each June for several years, the newspaper published an article announcing the opening of Hollywood Lake for the season.

This announcement in the June 8, 1941, issue also noted that the lake had been rebuilt after the 1940 flood. The earthen dam that created Hollywood Lake on a small tributary of Moravian Creek collapsed during this weather event. N.C. 16 South was flooded but no homes swept away then.

An article in June 1947 announced that Jimmie Ritchie, son of Mr. and Mrs. James Ritchie, would be a lifeguard there and noted that he is “one of the top three in life saving training” at North Carolina State University.

James Ritchie Jr. also was on the swim team and taught swimming at N.C. State. He served in the Asiatic Pacific area in the Navy during World War II and later had a successful engineering career designing poultry processing plants and installing equipment in them around the country.

The companion story is that Frank Perdue, Arthur Perdue’s son and president and CEO of Salisbury, Md.-based Perdue Farms for many years, visited James Ritchie Jr. in Seaford, Del., to also pick his brain for poultry knowledge.

James and Leora Ritchie had another son, Robert, and a daughter, Janet, and lived in a stately farmhouse on Hollywood Farm. The house is still standing but is in disrepair.

Troy Perry was president of the Wilkes Wildlife Club when the club leased Hollywood Lake from James Ritchie Sr. in 1950. An article in the April 17, 1950, issue of the Journal-Patriot announced an upcoming meeting of the club to discuss rules for fishing in Hollywood Lake.

Peter Ritchie said the lake, once stocked with bass, bream and trout, was drained and the dam removed a few decades later in response to concerns about safety below the impoundment.

He owned the farm and lived there from 1989 to 1999. Ritchie sold the farm, a decision he said he now regrets, to a doctor living and practicing in Wilkes at the time.

A 21-acre parcel that includes a much smaller impoundment of water on part of the site of Hollywood Lake has belonged to MorningStar Publications Inc., based in Rock Hill, S.C., since 2002.

Partly cloudy skies during the morning hours will become overcast in the afternoon. High 49F. Winds light and variable.

Rain showers in the evening then a mix of rain and freezing rain overnight. Low around 30F. Winds light and variable. Chance of precip 50%.