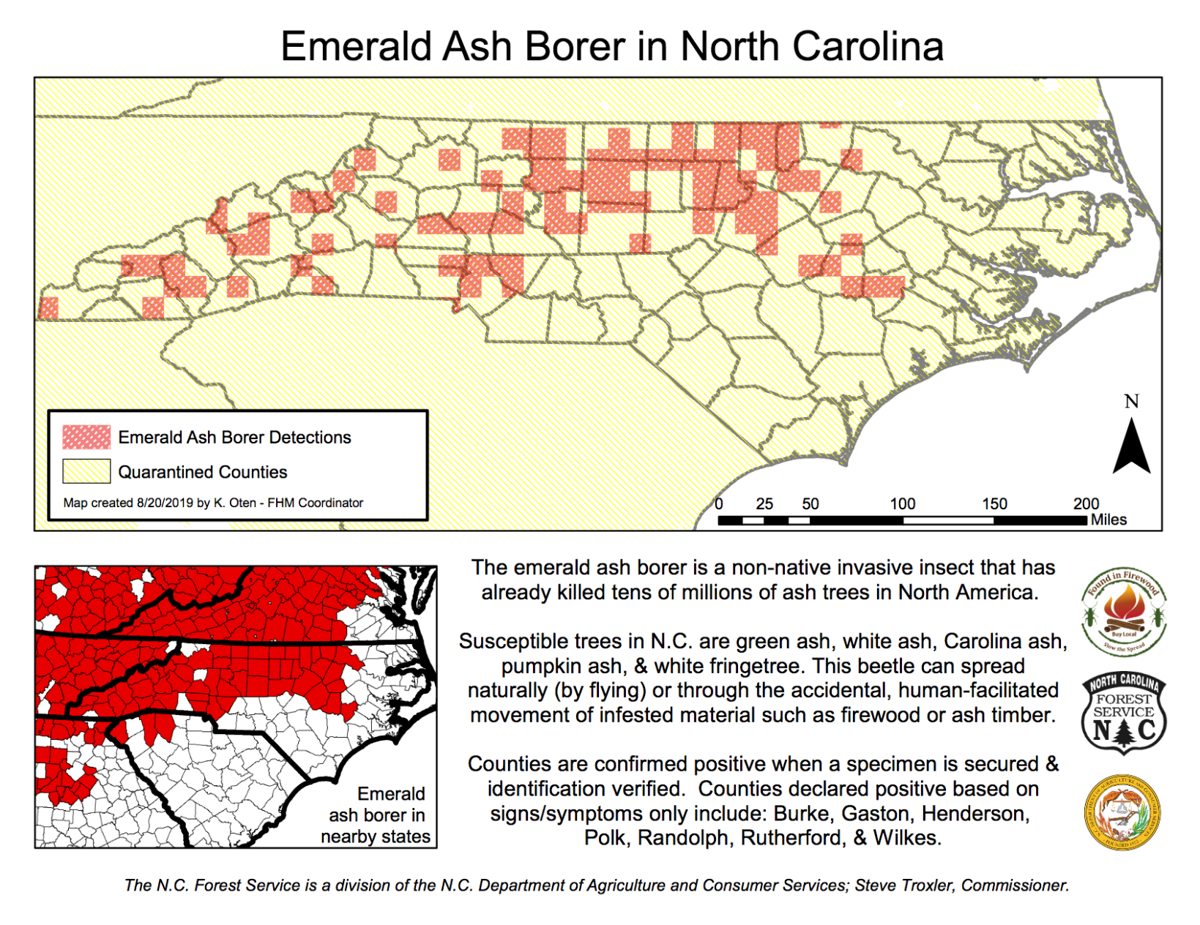 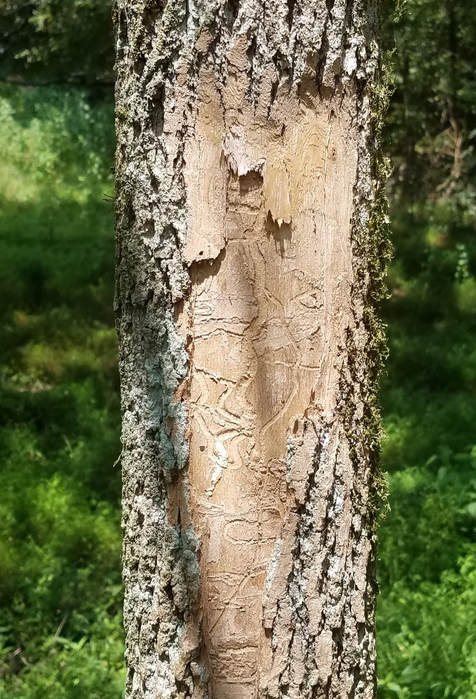 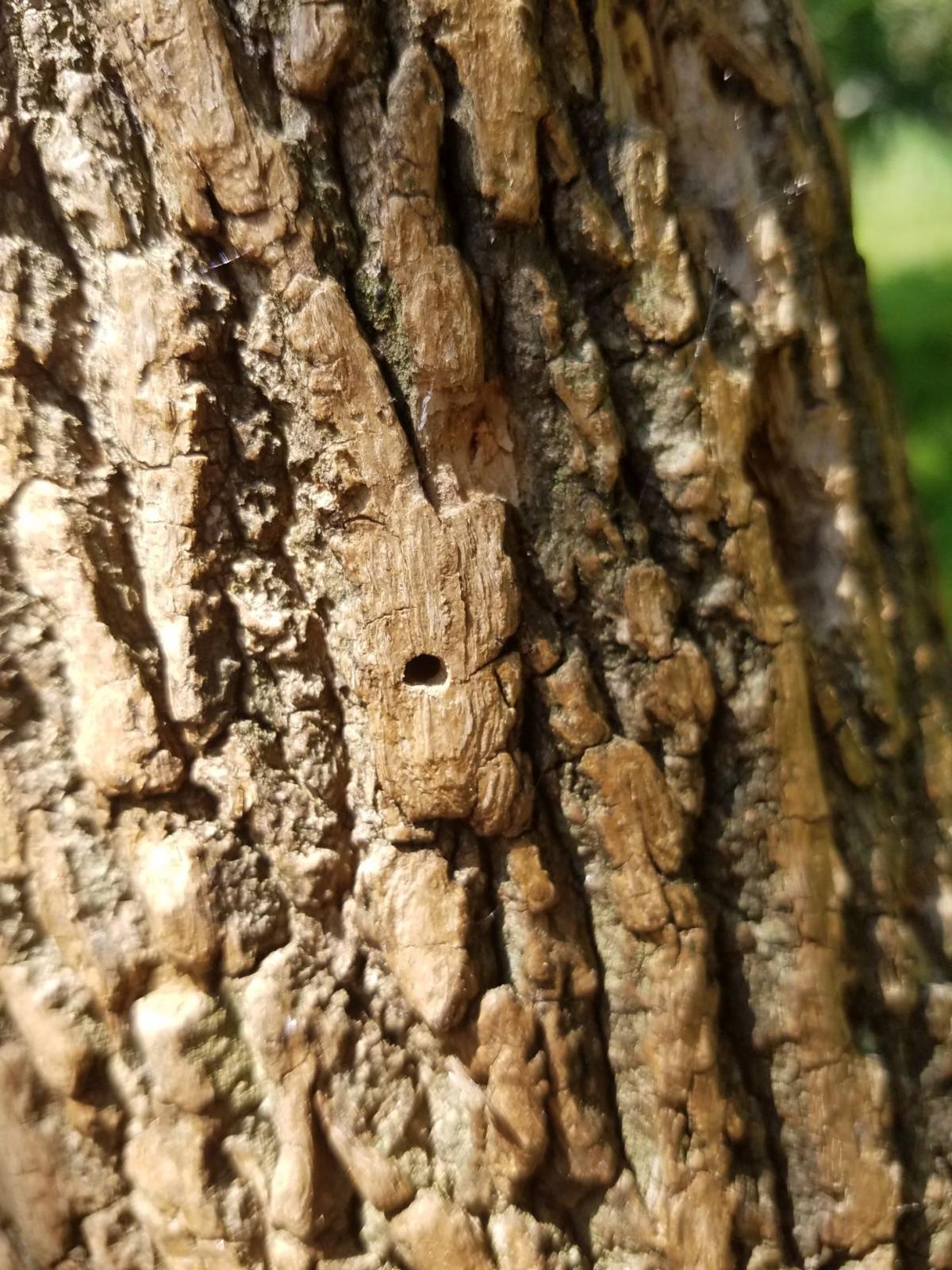 HOLES LEFT BY LARVAE when the bore into ash trees to feed are "D"-shaped.

HOLES LEFT BY LARVAE when the bore into ash trees to feed are "D"-shaped.

An invasive insect from Asia that has killed tens of millions of ash trees nationwide is in Wilkes County, announced the N.C. Forest Service on Tuesday.

Wilkes is the 50th North Carolina county where emerald ash borers have been seen or detected. It was first found in North Carolina in 2013, and in the U.S.  (in Michigan) in 2002.

The metallic green beetles lay eggs in the bark crevices of ash trees. When eggs hatch, the larvae bore into the bark and feed on transportation tissues of trees. This disrupts the movement of nutrients and water within trees, causing trees to slowly die, typically in three to five years.

The impact isn't always immediately noticeable because the damage is inside trees, but emerald ash borer infestation can be recognized by thinning and dying tree crowns; small, 1/8-inch D-shaped exit holes where adult beetles emerged from trees; larval “galleries” on the inside of bark; cream-colored larvae; and sprouting from main stems of trees.

There also is increased woodpecker activity, causing trees to appear to be losing patches of bark.

Emerald ash borers feed on all four types of ash trees native to North Carolina and the native white fringetree. The Chinese white fringetree, often planted as an ornamental, is believed to be resistant.

In Wilkes, ash trees are most often found on southern slopes and near streams in the Brushy and Blue Ridge mountains. Ash is an important timber species.

In addition to Wilkes, those counties “declared positive” for emerald ash borers due to signs and symptoms of them being found are Burke, Rutherford, Gaston, Henderson, Polk and Randolph.

All of North Carolina is under a quarantine for emerald ash borer. This prohibits the movement of ash plant parts, the insect itself, ash nursery stock and all hardwood firewood into non-quarantined areas such as central Tennessee, most of Alabama and all of Florida.

Adult emerald ash borers are about a half-inch long and an eighth of an inch wide. The bodies under their wing covers are metallic purple-red. Adults are typically active from late spring and early summer (April through June) in North Carolina. The larvae may be found under the bark of the tree most of the year.

The spread of invasive insects is often due to transportation of infested wood products like firewood, so the forest service recommends burning local or treated firewood to reduce this risk. The agency said who suspect a tree in Wilkes is infested with emerald ash borers can contact the forest service office on New Brown’s Ford Road near Wilkesboro at 336-773-4104.

Studies show that it’s too late if more than half of a tree’s canopy has been thinned or killed by emerald ash borers. It can take several years to notice tree health improvement following treatment. The forest service said the most effective method of insecticide application is soil injection or drench.

For more details about the insects in general, go to ncforestservice.gov and follow the links under the “Forest Health” section.

Partly cloudy in the morning. Increasing clouds with periods of showers later in the day. Thunder possible. High around 75F. Winds SSW at 5 to 10 mph. Chance of rain 50%.

A shower or two around the area in the evening, then partly cloudy overnight. Low near 50F. Winds W at 5 to 10 mph. Chance of rain 30%.

A shower or two around the area in the evening, then partly cloudy overnight. Low near 50F. Winds W at 5 to 10 mph. Chance of rain 30%.

Views of campaign donors cause concern

Candidate replies to comments on donations

Library should remain in regional system