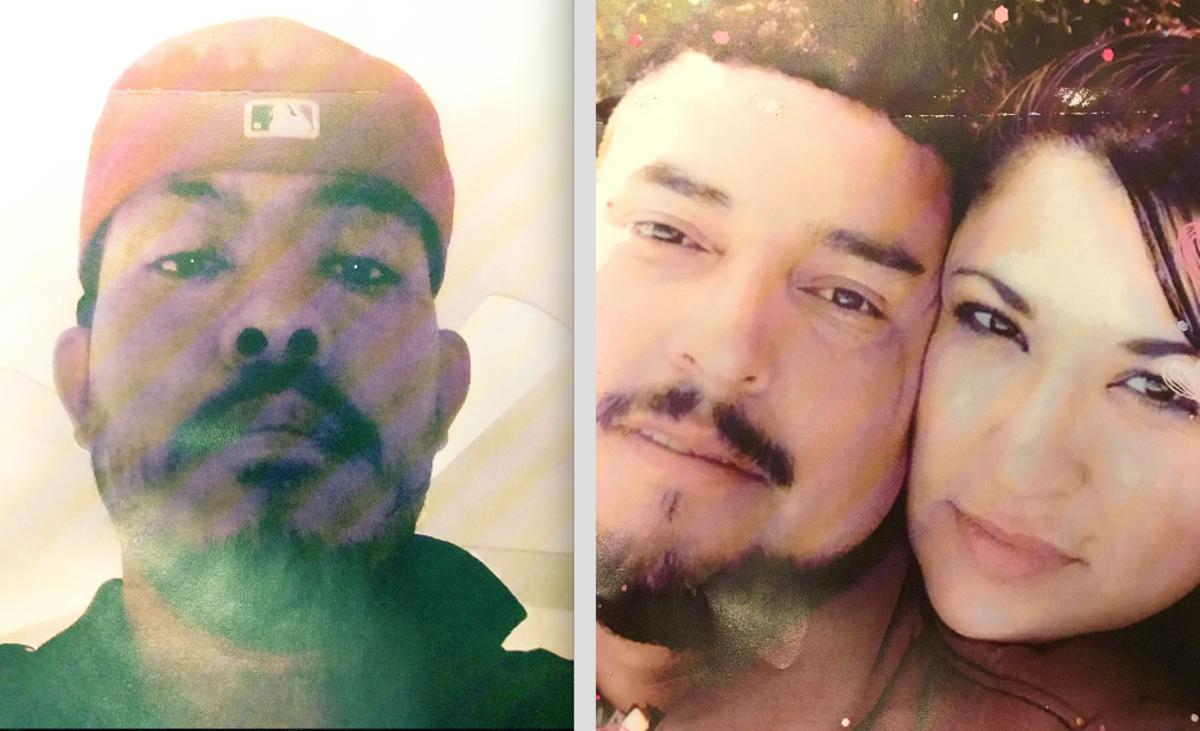 THE ALEXANDER COUNTY SHERIFF'S OFFICE, in cooperation with other agencies, is searching for, left to right, Luis Sanchez, Jose Mendez-Pena and Maria Calderon. Heidi Darlene Wolfe, 16, of Wilkesboro and Areli Avilez, 30, of Taylorsville are charged with three counts of murder each in he deaths of Calderon and two of her children. Alexander Sheriff Chris Bowman said it appears Sanchez and Mendez-Pena may have been murdered in the same case. Anyone with information on the whereabouts of Sanchez, Mendez-Pena or Calderon is asked to contact the Alexander Sheriff's Office. 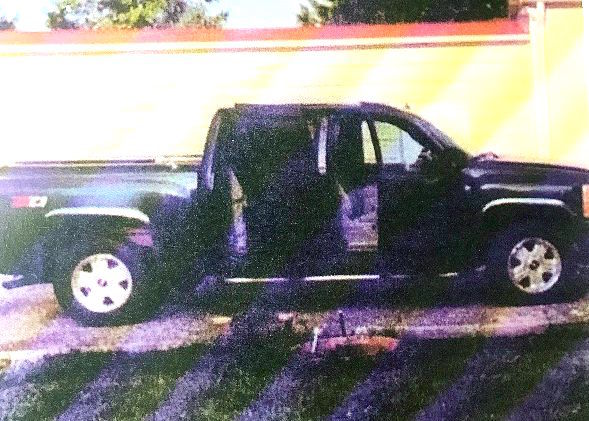 JOSE CARLOS MENDEZ-PENA was known to drive this dark blue, four-door 2009 Chevrolet Silverado pickup. The pickup’s N.C. tag number is PFC-9029. Anyone who sees the pickup is asked to contact the Alexander County Sheriff's Office. Authorities searched for the pickup in Wilkes and Ashe counties early this week.

THE ALEXANDER COUNTY SHERIFF'S OFFICE, in cooperation with other agencies, is searching for, left to right, Luis Sanchez, Jose Mendez-Pena and Maria Calderon. Heidi Darlene Wolfe, 16, of Wilkesboro and Areli Avilez, 30, of Taylorsville are charged with three counts of murder each in he deaths of Calderon and two of her children. Alexander Sheriff Chris Bowman said it appears Sanchez and Mendez-Pena may have been murdered in the same case. Anyone with information on the whereabouts of Sanchez, Mendez-Pena or Calderon is asked to contact the Alexander Sheriff's Office.

JOSE CARLOS MENDEZ-PENA was known to drive this dark blue, four-door 2009 Chevrolet Silverado pickup. The pickup’s N.C. tag number is PFC-9029. Anyone who sees the pickup is asked to contact the Alexander County Sheriff's Office. Authorities searched for the pickup in Wilkes and Ashe counties early this week.

An investigation of the murder of a mother and her two children in northern Alexander County has been expanded to include the possible murder of two men, said Alexander Sheriff Chris Bowman.

Bowman said Friday that Jose Carlos Mendez-Pena, 33, and Luis Fernando Sanchez, 36, are missing and feared murdered in connection with the murders of Maria Calderon, 38, and her son, Angel Pacheco, 11, and daughter, America Pacheco, 12. (She is listed as Maria Calderon Martinez in Alexander records.)

Last month, an Alexander County Grand Jury indicted Heidi Darlene Wolfe, 16, of Wilkesboro, and Areli Aguirre Avilez, 30, of Taylorsville on three counts of first-degree murder each in the deaths of Calderon and the two children.

Avilez and Wolfe remain in custody without bond. “My understanding is that the DA will try her (Wolfe) as an adult,” said Bowman. Even if Avilez was released on bond, added the sheriff, he would still be detained because he is an illegal alien from Mexico.

According to court papers, Calderon and the two children were murdered on the night of June 15 in their mobile home near the northern end of Black Oak Ridge Road in the Vashti community. Firefighters found the badly burned bodies of the kids in the mobile home after extinguishing a fire there late that night. Calderon’s body hasn’t been located.

The children died from one gunshot each, according to autopsy reports. “In my opinion, it was execution-style,” said Bowman, adding that it’s unlike any case he’s been involved with in his 40 years in law enforcement in Alexander and is unusual for the county.

“It’s hard any time a child is involved,” but this has been an especially troubling case for law enforcement and other emergency personnel, he explained. The two kids were students at Hiddenite Elementary School.

According to court papers, Wolfe said in an interview that Avilez killed two people in the mobile home in Vashti when she and Avilez went there the night of June 15. The papers quote Wolfe as saying that when a third person ran out, Avilez told her to run over the person and she did, killing the person.

Bowman said the two killed in the mobile home were the children and Calderon was the person who ran out.

“Avilez wrapped her (Calderon) up in a cover and they took her across Oxford Dam and dumped the body,” say court papers. Oxford Dam is on the Catawba River on the Alexander-Catawba county line. Extensive searching in and near the Catawba River in this area for her body was fruitless.

Court papers say that when Alexander detectives interviewed Avilez, he “denied killing the two individuals” in the Vashti mobile home or setting the structure on fire. In the interview, they learned that Avilez had a girlfriend named Heidi Wolfe.

Bowman said Avilez and Calderon were once married, but Mendez-Pena was Calderon’s boyfriend at the time of the murders. Mendez-Pena and Sanchez were co-workers in construction outside Alexander County on weekdays and they plus a third man were building an addition to Calderon’s mobile home at the time the two men disappeared, he added.

Alexander investigators are actively looking for Mendez-Pena and Sanchez to determine their well-being and aren’t aware of anyone seeing or hearing from them since they were seen at Calderon’s mobile home in Vashti on June 14, said Bowman. Investigators communicated with relatives of the two men in Mexico and with people who know them in this country.

“There is a good possibility” that they also were murdered, said Bowman.

“I believe there are people who know something about this…. I want to get the word out in the Hispanic community and to others that they don’t have anything to fear by coming forward with information” concerning Mendez-Pena, Sanchez and Calderon and their whereabouts.

He said anyone with relevant information is asked to call the Alexander Sheriff’s Office at 828-632-1111 between 8 a.m. and 5 p.m. on weekdays or at 828-632-2911 after hours or on weekends. Alexander County Crimestoppers is offering a reward for information concerning the whereabouts of Mendez-Pena, Sanchez or Calderon. The Crimestoppers number is 828-632-8555.

Bowman said Mendez-Pena and Sanchez are known to have connections in Wilkes and Ashe counties and Alexander investigators were in those counties early this week following up on leads and working in cooperation with the sheriff’s offices there. A drone was used and the N.C. Highway Patrol assisted with a helicopter there.

The search includes looking for a dark blue, four-door 2009 Chevrolet Silverado pickup that Mendez-Pena was known to drive. The pickup’s N.C. tag number is PFC-9029.

The Ashe Sheriff’s Office issued a statement saying the pickup could have been left in a remote area and Ashe residents should be on the lookout for it on their properties. “To preserve as much evidence as possible, investigators ask that anyone who locates the vehicle refrain from entering, touching or even approaching the vehicle,” the statement said.

Bowman said he appreciated the support of other law enforcement agencies in the case. Wilkes Sheriff Chris Shew and Ashe Sheriff Phil Howell “have gone beyond the call of duty in assisting us” in looking for the missing people, he said, adding that it remains an active, ongoing investigation.

Avilez and Wolfe are also charged with first-degree arson as a result of the mobile home fire, plus Avilez is charged with violating a domestic protective order with a deadly weapon and statutory rape of a child age 15 or younger.

A judge issued the protective order on behalf of Calderon against Avilez on Jan. 16 after he threatened to burn down her home. Avilez was convicted of assaulting Calderon earlier this year. Wolfe apparently is the victim in the case in which Avilez is charged with statutory rape.

Wolfe’s last known address in Wilkes is Old N.C. 18, Wilkesboro. Bowman said she had been staying with Avilez in Alexander for an undetermined length of time and was arrested in Alexander. Records show Wolfe earlier attended Wilkes Central High School.