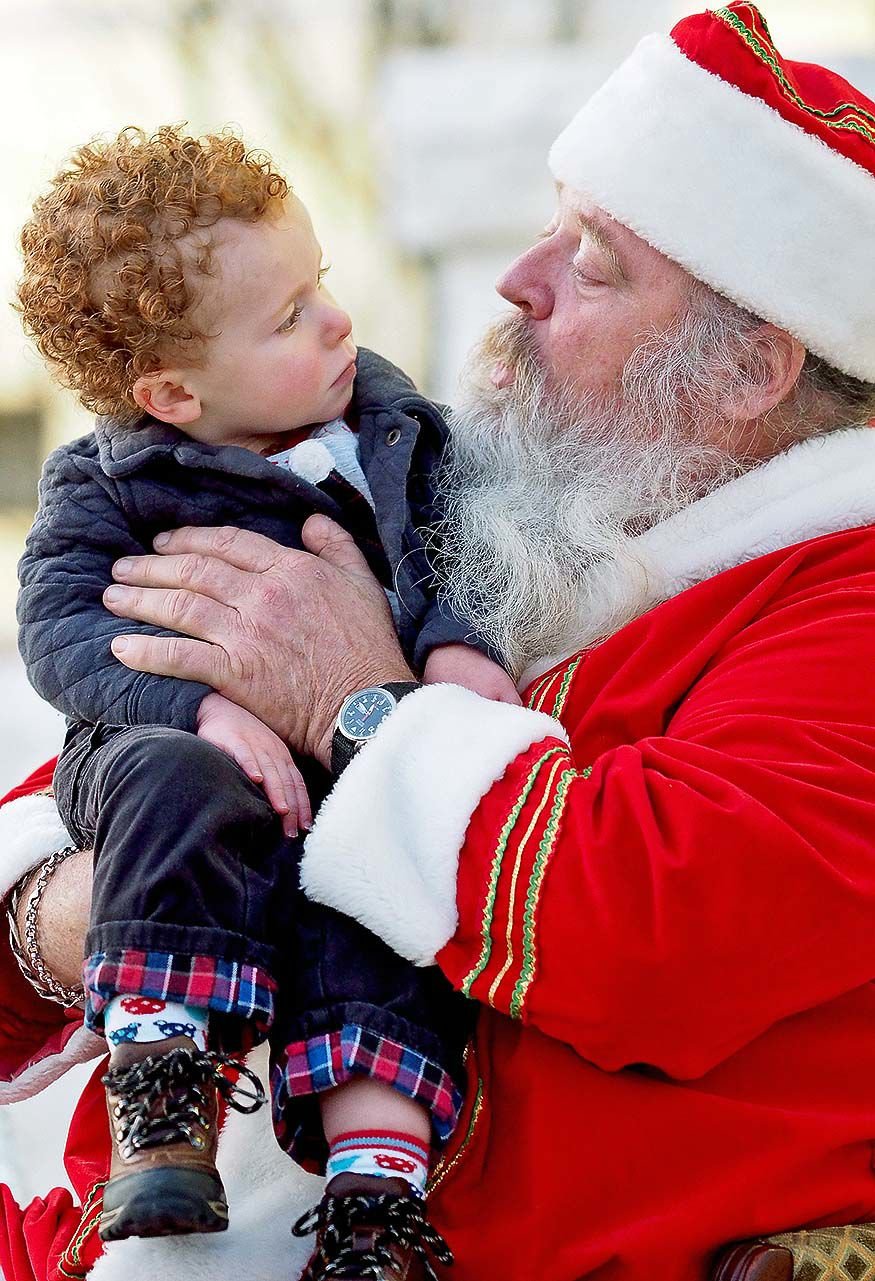 SIZING UP SANTA with an incredulous look is Finley Case of Wilkesboro, who was one of the first toddlers in line to meet the Jolly Old Saint Nicholas during “Christmas in the Commons” Saturday in Wilkesboro. 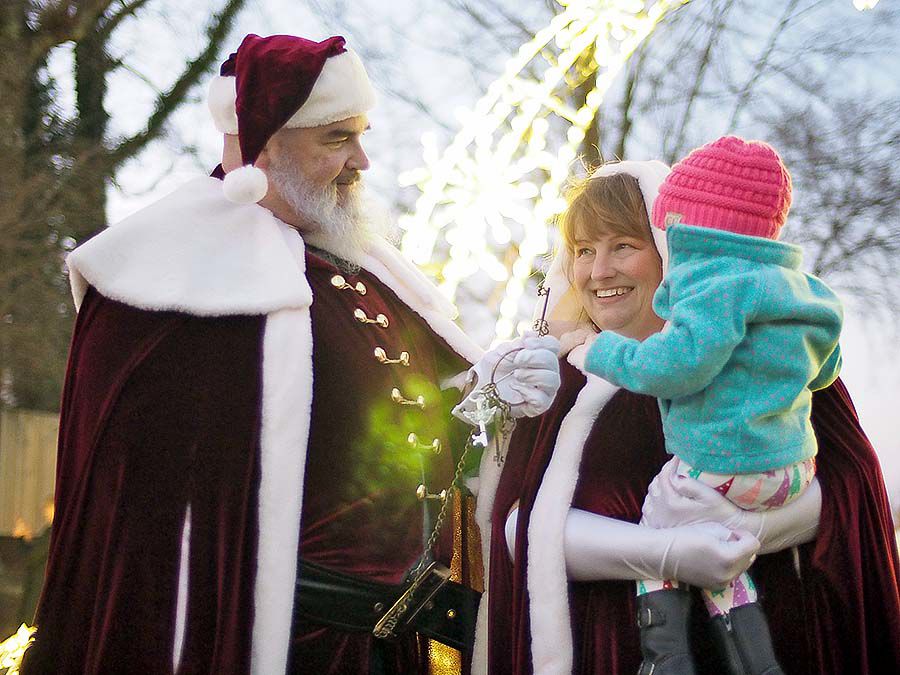 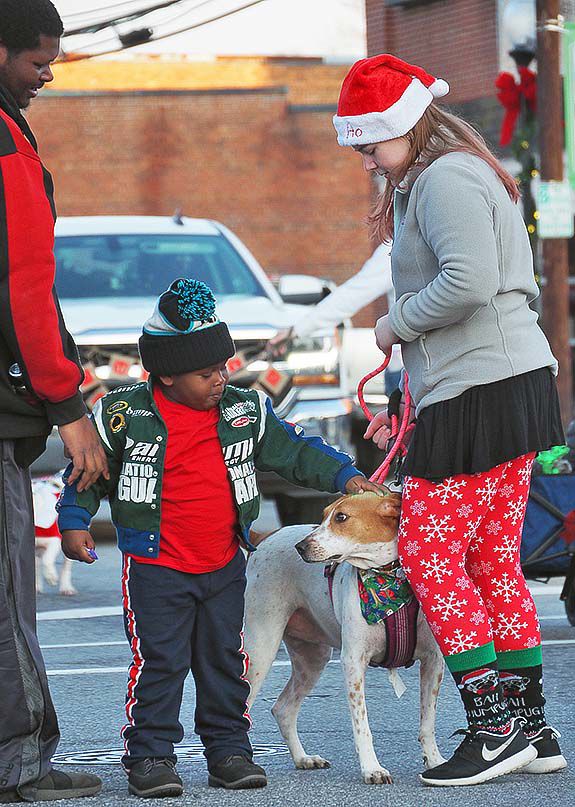 PARADING DOG stops long enough to be petted by a young parade spectator in Wilkesboro during the Wilkes Christmas Parade on Saturday. 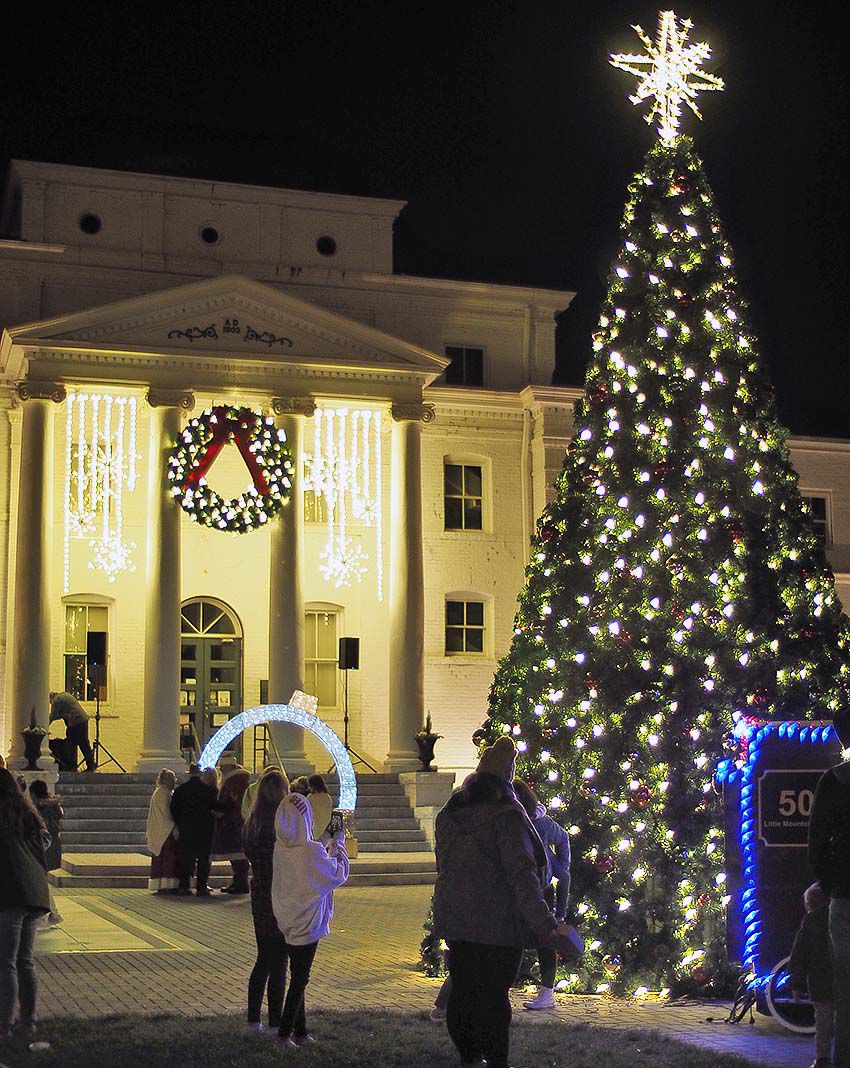 TREE LIGHTING took place in front of the Wilkes Heritage Museum at the conclusion of Saturday’s “Christmas in the Commons” in Wilkesboro.

SIZING UP SANTA with an incredulous look is Finley Case of Wilkesboro, who was one of the first toddlers in line to meet the Jolly Old Saint Nicholas during “Christmas in the Commons” Saturday in Wilkesboro.

PARADING DOG stops long enough to be petted by a young parade spectator in Wilkesboro during the Wilkes Christmas Parade on Saturday.

The annual Wilkes Christmas Parade through the Wilkesboros drew over 90 entries and thousands of spectators Saturday, prompting local organizers to call it one of the best in recent memory.

There was a great variety of entries, including all four Wilkes high school marching bands, said Linda Cheek, Wilkes Chamber of Commerce president. “We loved all the music the participants included on their floats,” she said. “It was a fabulous day for a parade.”

Many of the floats focused on this year’s parade theme, “Christmas Dreams.” Larry and Diane Stone’s “Grand Marshals’ Award” went to Stepping Out Studios Inc. and the “Mayors’ Award” (as co-selected by Wilkesboro’s Mike Inscore and North Wilkesboro’s Robert Johnson) was presented to Bleu Moon Productions’ “FROZEN JR.”

Bleu Moon’s Karen Reynolds said later, “We are beyond excited and totally proud of this group.”

The “Best of Theme Award,” co-selected by all the parade judges, went to the Caldwell County Storm volleyball team. Tyson Foods Inc. was recipient of the “Chairman’s Award,” judged by Jimmy Flythe, chairman of the Wilkes Chamber of Commerce Board of Directors.

“We could tell there was a lot of work that went into the decorating of the floats,” said Cheek. “It was a great way for businesses to advertise their services to so many people.”

There were elected officials, marching bands, cheerleaders and school queens, kings and other “royalty,” as well as antique and classic cars and horses. Also represented were churches, civic groups, fire departments, other emergency services and other nonprofits.

Parade volunteers included Scott Cranston, LP plant manager and executive committee member of the chamber board; Terri Stackhouse, Realtor with Carolina Realty; and LP’s David Stackhouse, who directed the parade. Cheek said the Stackhouses have been great volunteers for many years.

It started in downtown North Wilkesboro and ended just west of downtown Wilkesboro, allowing for a natural segue into “Christmas in the Commons” in Wilkesboro’s Carolina West Wireless Community Commons and Heritage Square.

From 4:30-7:30 p.m., the Commons was filled with family activities and displays from food and craft vendors. Sharine Buchanan of Moravian Falls sang “O Holy Night” just prior to the lighting of the Heritage Square Christmas tree in front of the Wilkes Heritage Museum, which had its annual Christmas open house earlier that day.

Inscore and Town Councilmen Jimmy Hayes and Andy Soots led the lighting ceremony. Inscore said Monday, “The parade was exceptional and I was pleased with the turnout in both towns. I was really excited to see all the people mingling around the Heritage Museum and the Commons. The work that went into these events by our planning department was appreciated.”

He added, “The weather was conducive to everyone having a wonderful time with good family fellowship. I thought all of the parade winners were more than deserving.”

A collection of images from Saturday's annual Wilkes Christmas Parade and "Christmas in the Commons" in historic downtown Wilkesboro, as captu…

Cloudy with occasional rain in the afternoon. High around 40F. Winds SSW at 5 to 10 mph. Chance of rain 90%.

Rain showers early with clearing later at night. Low around 35F. Winds WSW at 5 to 10 mph. Chance of rain 40%.