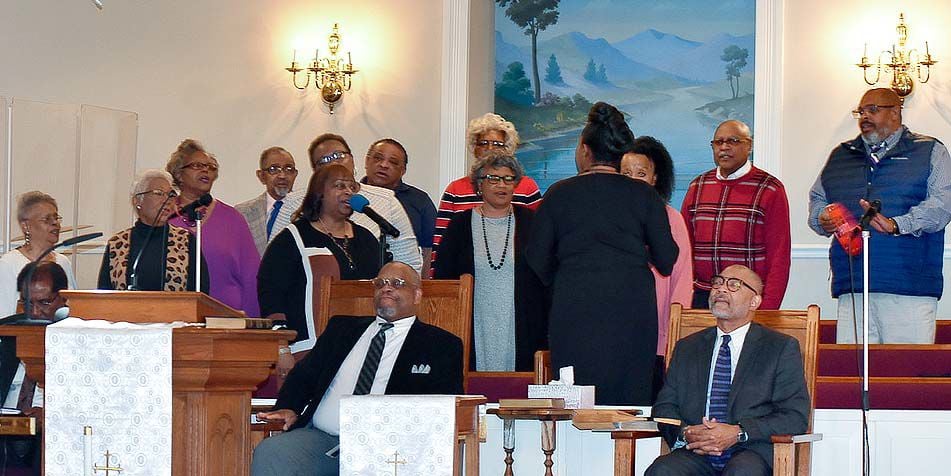 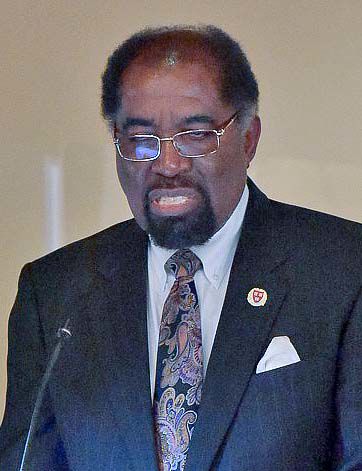 Erwin encouraged the audience to go beyond King’s famous “I Have A Dream” speech and events honoring him and remember King as a minister and a man of God. Erwin said, “Today, we are honoring a man who kept the faith.”

Erwin said he believes “the reverend” part of King’s title has been forgotten. His actions came from being a minister.  “We can get lost in titles. Titles don’t mean anything if you haven’t kept the faith.”

Despite facing many dangers, King kept the faith, Erwin said. He allowed his faith in God to order his steps.  “King’s faith helped him survive.” His experiences should have caused him to lose faith, but didn’t.

King didn’t believe in violence and believed in the freedom of expression, Erwin said. He wanted to ensure equality, brotherhood, dignity and love for all mankind, and for every man to enjoy the same rights. He wanted to ensure everyone has the same freedoms—where to live, work, sit, dine, vote, attend school and speak.

Interacting with the audience, Erwin read experiences from King’s life and asked the audience to determine whether they were a dream or a nightmare. Both come from unconscious thoughts, Erwin said; however, dreams are positive and nightmares are negative.

He said he hears the sound of King’s voice saying, “Free at last, thank God Almighty, we are free at last,” but asked, “Are we free? Are we free from oppression, economic inequality, poverty, racial tension, social injustice and voting discrimination?”

Erwin said the challenge was not to become complacent but to allow God to order your steps.

He reminded the audience the observances honoring King’s life in Wilkes County happen because of the efforts of the late Felix Stevens. He initiated the first prayer breakfast and petitioned the Wilkes County Board of Education to observe Dr. Martin Luther King Jr. Day.

Stevens also petitioned the governor for an observance honoring King’s life. “He (Felix Stevens) was a man who kept the faith. He made a difference in Wilkes County,” Erwin said.

The Rev. William Rowe Jr., New Damascus’ minister, introduced Erwin, saying it was an honor and privilege to introduce his good friend. A native of Charlotte, Erwin has lived in Wilkes over 50 years. He is a graduate of Livingstone College and earned master’s and doctorate degrees at Appalachian State University.

Rowe said Erwin has achieved many firsts—first African-American principal and principal of the year in Wilkes County, first African-American dean and dean emeritus at Appalachian State University, a scholarship in his honor at North Carolina A&T, among many other accolades. “He is a Martin Luther King-like individual,” Rowe said, “His firsts paved the way for others and gave them the opportunity.”

Robin Whittington gave the purpose of the program using the acronym for “purpose”—P-praising God every day, no matter the test or situation including segregation or racism; U-unite; R-recognize all of the Rev. Dr. Martin Luther King’s accomplishments; P-pastor, activist, mentor, friend; O-of course, we can’t forget Dr. King’s, “I Have A Dream” speech and how it makes us feel; S-servant, willing servant of God; E-every opportunity Dr. King showed us how to help those in need.

Special music was provided by the New Damascus Combined Choir.

Rain showers in the evening becoming a steady light rain overnight. Low near 55F. Winds SSW at 5 to 10 mph. Chance of rain 60%.