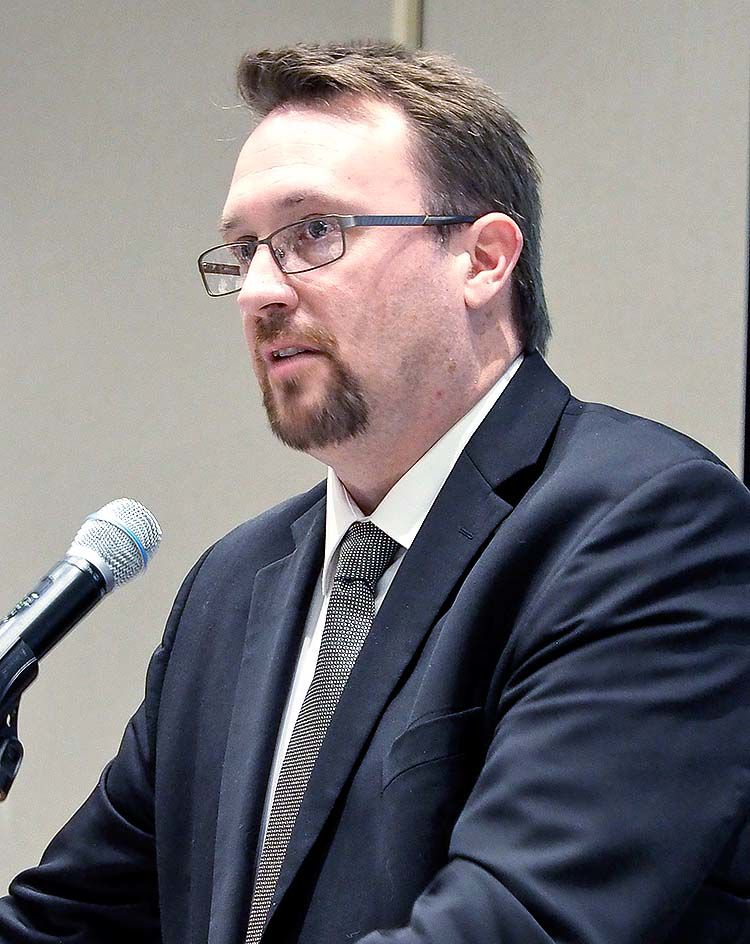 Jody Call is the Wilkes Chamber of Commerce board chairman for 2020. 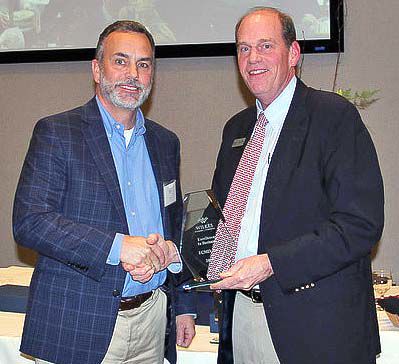 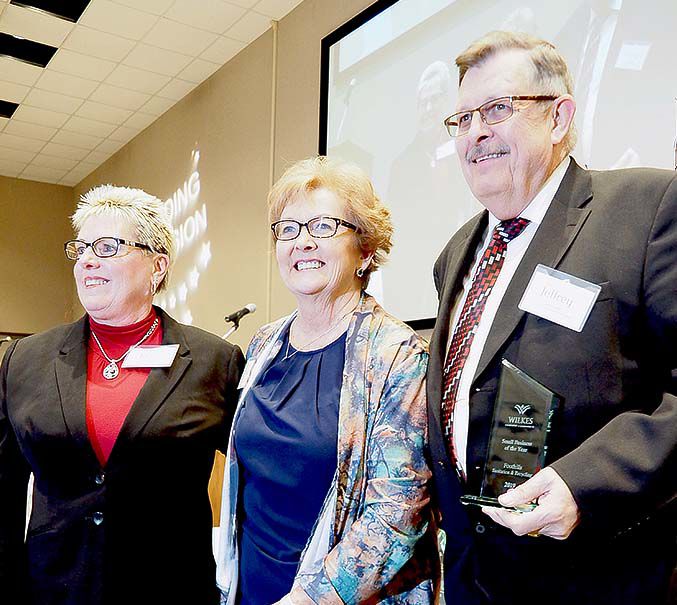 JEFF AND JANET MILLER of Foothills Sanitation and Recycling receive the Small Business of the Year Award from Linda Cheek, center. 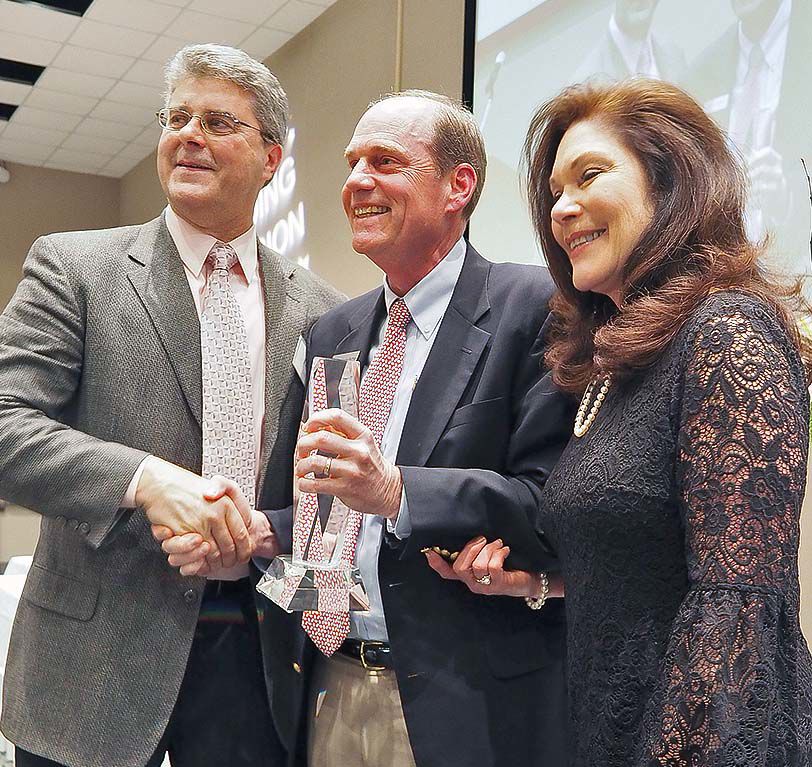 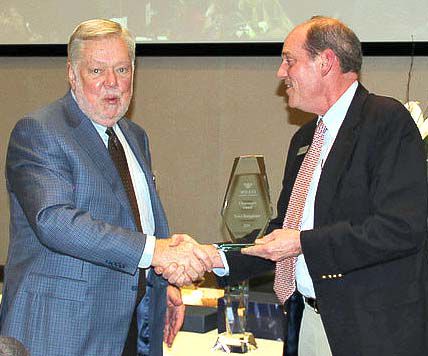 Jody Call is the Wilkes Chamber of Commerce board chairman for 2020.

JEFF AND JANET MILLER of Foothills Sanitation and Recycling receive the Small Business of the Year Award from Linda Cheek, center.

Business and civic leaders in Wilkes County were challenged to focus on present and future economic opportunities and keep the past “in our rear view” by the new Wilkes Chamber of Commerce board chairman Thursday night.

“We are in a battle with a multi-faceted opponent, and it’s important to remember we are not in a battle to win back anything we have lost” economically, said Jody Call, installed that night during the chamber’s 74th annual Membership Celebration at the Walker Center in Wilkesboro.

“We can make small adjustments to our plan and vision along the way and stay ahead of the pain, but we have to realize that, when a major shift is required, to respond quickly and diligently,” added Call after taking the reins from outgoing chairman Jimmy Flythe, director of government and community relations for Duke Energy’s west region.

Call referenced economic challenges faced in Wilkes in the decade or so starting in 1980, including the sale of Northwestern Bank to First Union, move of Lowe’s Companies’ corporate headquarters to Mooresville, Norfolk Southern Railway no longer coming to North Wilkesboro and closure of the North Wilkesboro Speedway.

Call said simply having an economic vision for Wilkes isn’t enough. “We must have engaged and effective leadership to guide and execute that vision. We have to learn to celebrate small victories and use that momentum to carry us through the next series of losses along our path to improving Wilkes County.”

Call closed by paraphrasing local businessman Jim Swofford’s speech when he was inducted into the Wilkes County Hall of Fame in 2019. He said Swofford referred to Wilkes County as “Mother Wilkes” and said she always “welcomed him back into her open arms and brought him home to rest with her.”

Flythe presented the Chairman’s Award to Terry Bumgarner, calling him a “devoted and very deserving businessman and community leader who gives his time, efforts and knowledge to improve the quality of life for so many others.” Bumgarner chairs the Wilkes Community College Board of Trustees and the Wilkes Economic Development Corp. board.

Flythe selected and presented the Excellence in Business Award to North Wilkesboro-based East Coast Millwork Distributors (ECMD), represented at the event by Bill Elkin, the company’s chief financial officer. The award goes to a business that has experienced continued growth and success, while financially supporting nonprofits and the community.

Flythe said ECMD employs more than 860 people nationwide, including 260 in Wilkes. It was recently selected as one of the state’s “Mid-Market Fast 40” businesses by “Business North Carolina” magazine.

Founded in 1982, ECMD is one of the nation’s largest suppliers of building materials, stairs and flooring. It’s a conglomerate of four separate companies specializing in different aspects of the building materials industry.

Chamber members submit nominations for this award and then vote to determine the winner. It recognizes businesses that have demonstrated positive and sound business practices.

Cheek said Foothills was founded in 1989 and processes about 70 tons of recyclable material per day. The company educates local citizens about the importance of reducing, reusing and recycling material that would normally end up in a landfill, she said. Foothills also collects solid waste.

She said Foothills is the only municipal solid waste and commercial recycling company within a 60-mile radius. It has grown to include up to 15 garbage trucks, three roll-off trucks and 60 large open-top waste containers for use in waste collection and hauling.

Flythe presented the Duke Energy Citizenship and Service Award to David and Terrie Stackhouse, who he called “two of the most compassionate, hard-working, caring, intelligent and giving individuals you could ever meet.” He cited their extensive volunteer efforts and past services as chamber board chairmen.

The Stackhouses moved to Wilkes over 20 years ago and immediately became involved in the community, said Flythe. They have volunteered at their church, their children’s schools and elsewhere in the community.

Both have served on boards and committees of United Way of Wilkes, Wake Forest Baptist Health—Wilkes Medical Center, the Town of North Wilkesboro and other nonprofits.

Brent West, human resources manager at the Tyson Foods Inc. complex in Wilkesboro, spoke on behalf of Tyson, dinner sponsor. West said that in addition to being the county’s largest employer, Tyson is “the employer of choice.” He said the company is defined by “raising the world’s expectations for how much good can do.”

“It’s a blessing and an honor to work with the greatest, most generous people in the county and world, our Tyson team members,” said West. “They step up to the plate, giving and supporting others.”

The evening’s entertainment was provided by singer-guitarist Presley Barker, 15, who lives in Traphill and is a student at East Wilkes High School. Barker has played live on the Today Show, at MerleFest and many other music venues over the past five years.