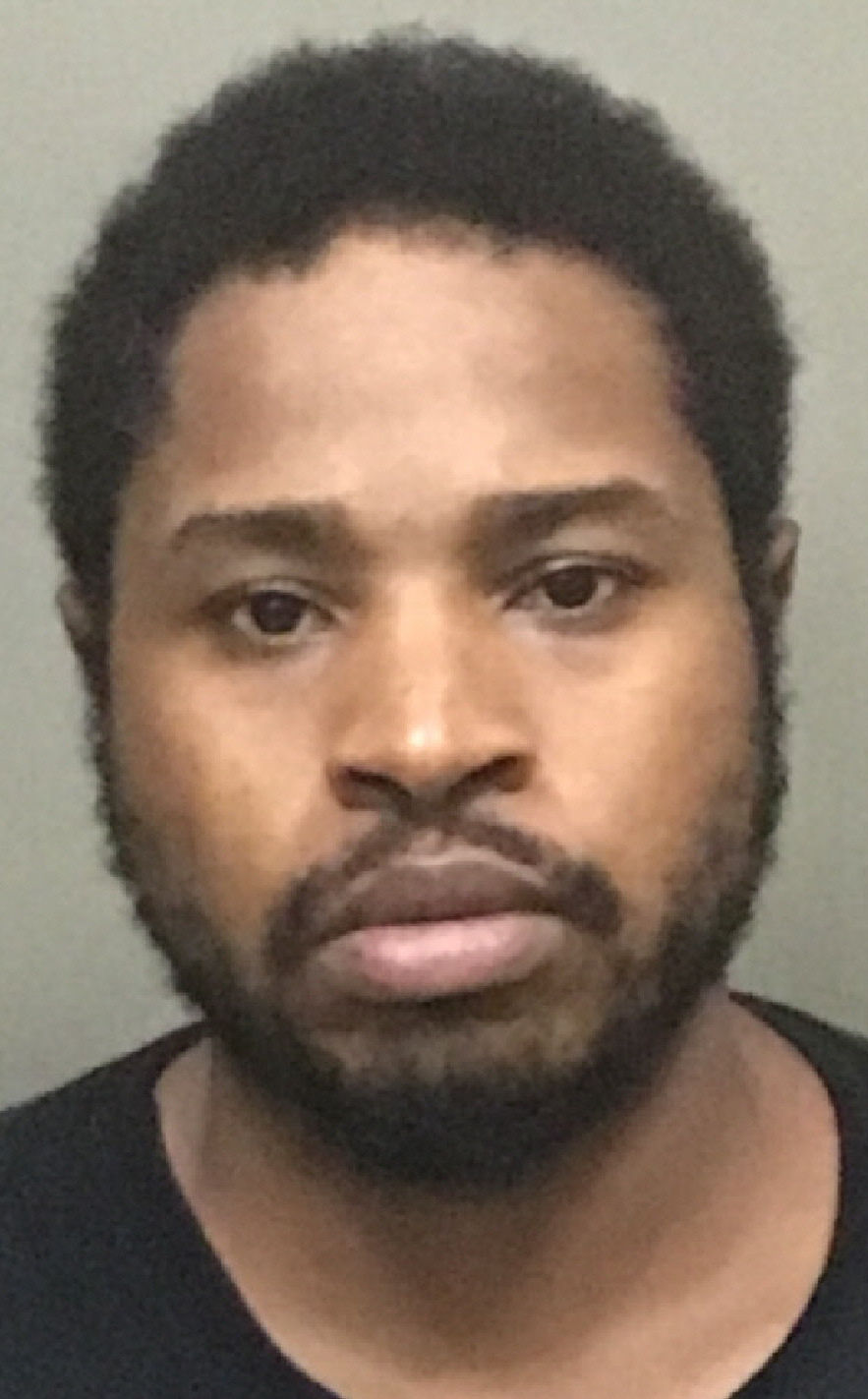 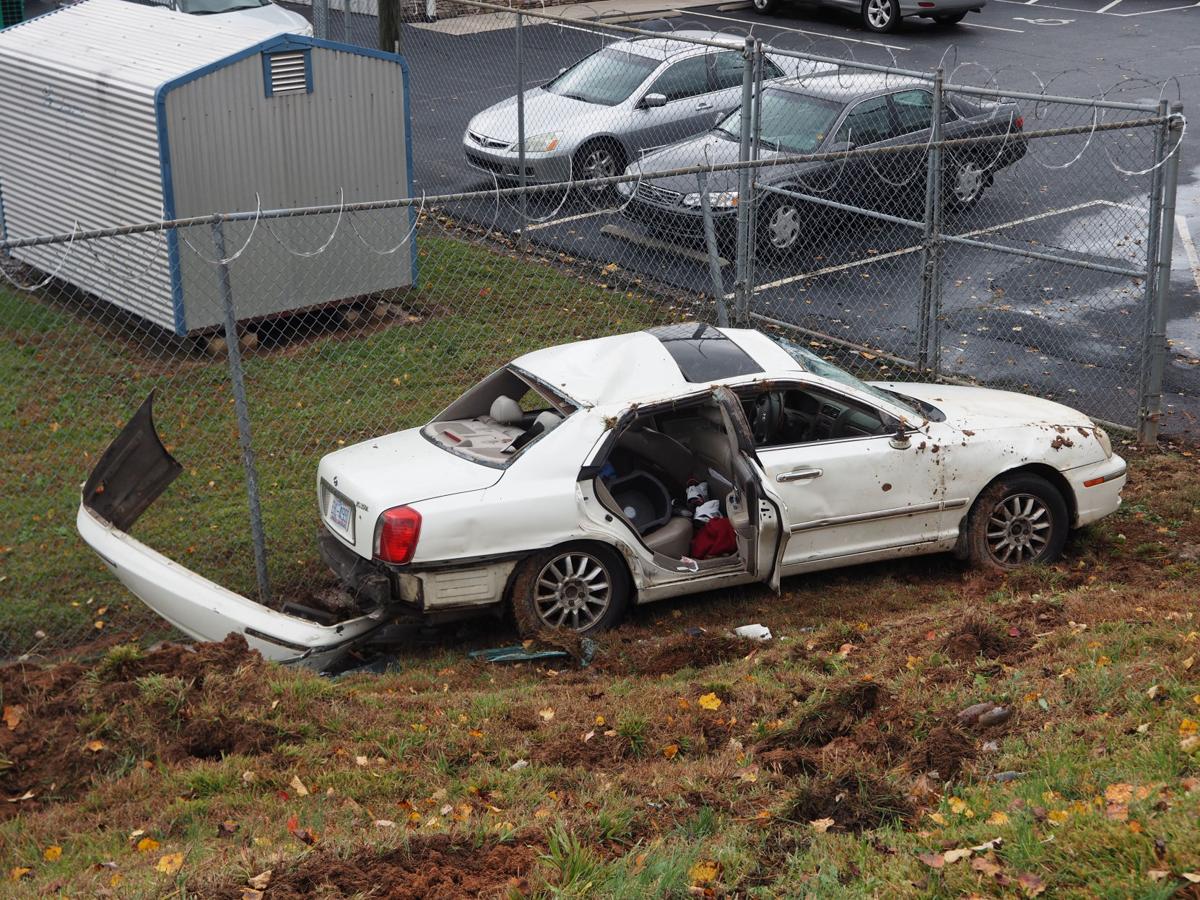 PURSUED VEHICLE in chase wrecked on Edgewood Road near the Oakwoods Road traffic circle in Wilkesboro. 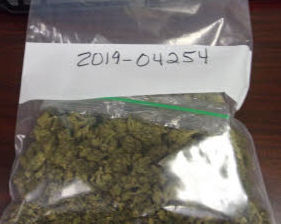 WILKES SHERIFF'S OFFICE seized 105 grams of marijuana with the arrest of Mario Gilford on Thursday. 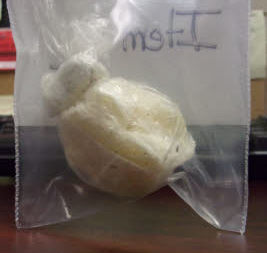 14 GRAMS OF CRACK COCAINE were seized when Mario Gilford was arrested.

PURSUED VEHICLE in chase wrecked on Edgewood Road near the Oakwoods Road traffic circle in Wilkesboro.

WILKES SHERIFF'S OFFICE seized 105 grams of marijuana with the arrest of Mario Gilford on Thursday.

14 GRAMS OF CRACK COCAINE were seized when Mario Gilford was arrested.

A motor vehicle chase Thursday afternoon resulting from a narcotics investigation ended with two Wilkes Sheriff’s Office vehicles being struck and the pursued car wrecking near the intersection of Oakwoods and Edgewood roads in Wilkesboro.

The sequence of events Thursday resulted from the Wilkes Sheriff’s Office being told that Mario Janelle Gilford, 30, would be transporting marijuana and crack cocaine from where he was staying off Edgewood Road near Wilkesboro, said Capt. Craig Dancy, who heads the sheriff’s office’s narcotics unit.

Sheriff’s office narcotics detectives had the area were Gilford was living under surveillance Thursday afternoon when they spotted him driving a 2005 Hyundai on Edgewood Road, headed toward Oakwoods Road.

Dancy said detectives followed Gilford to Oakwoods Road and from there to Midtown Plaza in North Wilkesboro. He said they were trying to contain the Hyundai in the Midtown Plaza parking lot with their vehicles when Gilford escaped by driving over a curb and heading south on his same route when followed - on Wilkesboro Avenue, across the Yadkin River on Wilkesboro Boulevard and on Oakwoods Road.

Detectives had their blue lights and sirens activated as they pursued the Hyundai, said Dancy, adding that speeds never exceeded 60 mph and other motorists weren’t put at risk.

He said the pursued car hit Det. John Watson’s vehicle as Watson tried to block the Hyundai when it was turning left (the wrong way) into the traffic circle at the intersection of Oakwoods and Edgewood roads and the U.S. 421 on and off ramps.

Dancy said the Hyundai continued the wrong way in the traffic circle, turned left on Edgewood Road and struck Det. Steve King’s vehicle as King also attempted to block the car. The impact broke off the left front wheel of King’s vehicle and the Hyundai ran off the left side of Edgewood Road, overturned down a grass embankment and came to rest on its wheels against a Charter Spectrum chain link fence. The fence was slightly pushed over.

Gilford exited the Hyundai and was fleeing on foot when Dancy, also engaged in the chase, tackled him about 25 yards from the Hyundai. Dancy said Gilford had a small backpack containing marijuana and crack cocaine on his person when he was tackled. He said the sheriff’s office seized 14 grams of crack cocaine, 105 grams of marijuana, digital scales, two knives and $310 from Gilford.

Dancy said one of King’s wrists was sprained as a result of his steering wheel being jerked around when the Hyundai hit his vehicle. King was taken in a sheriff’s office vehicle to Wilkes Medical Center for treatment.

Dancy said that as a result of the Hyundai hitting the two sheriff’s office vehicles, Gilford was charged with two counts of assault with a deadly weapon on law enforcement. He said that due to Gilford elbowing him after he tackled him, Gilford was charged with resisting, obstructing and delaying an officer. The sheriff’s office also charged Gilford with felony fleeing to elude arrest and careless and reckless driving.

The Wilkesboro Police Department, which responded to the scene and investigated the collisions, charged Gilford with driving while license revoked, aggressive driving and going the wrong way on a one-way street (the traffic circle).

Wilkesboro Sgt. Jerry Parsons reported that King’s vehicle received about $3,000 in damage, Watson’s vehicle about $800 in damage and the Hyundai about $10,000 in damage in the incident, which occurred about 2:40 p.m. Thursday. Parsons said the left front quarters of both sheriff’s office vehicles were hit.

Dancy said Gilford was living off McGlamery Road in Millers Creek when the sheriff’s office arrested and charged him with possession with intent to sell and deliver marijuana and resisting arrest after a brief chase in the Autumn Woods subdivision off N.C. 16-18 South in Moravian Falls about six months ago. He is awaiting trial on those charges, as well as on a charge of possession of a firearm by a convicted felon.

Partly cloudy skies during the morning hours. Thunderstorms likely in the afternoon. High 86F. Winds SSW at 5 to 10 mph. Chance of rain 80%.

Partly to mostly cloudy. A stray shower or thunderstorm is possible. Low near 65F. Winds light and variable.

A few clouds. Low around 65F. Winds light and variable.

A few clouds from time to time. Low near 60F. Winds light and variable.

Partly cloudy in the evening. Increasing clouds with periods of showers after midnight. Low 64F. Winds light and variable. Chance of rain 40%.

Hope for the future