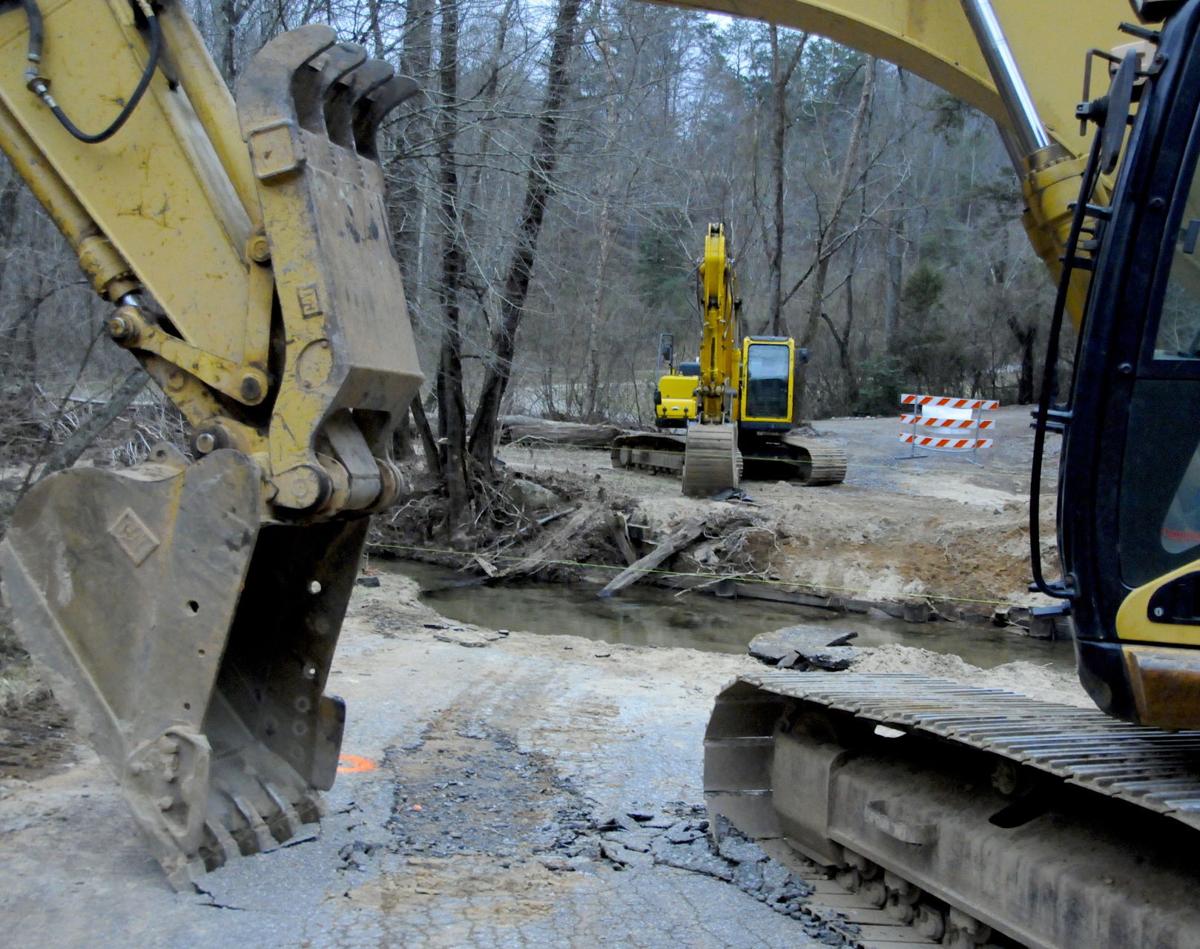 Equipment is in place to start rebuilding the Hose Road bridge over Rocky Creek near Brushy Mountain Road on the “backside” of the Brushy Mountains. The bridge was swept away by floodwaters Nov. 12. 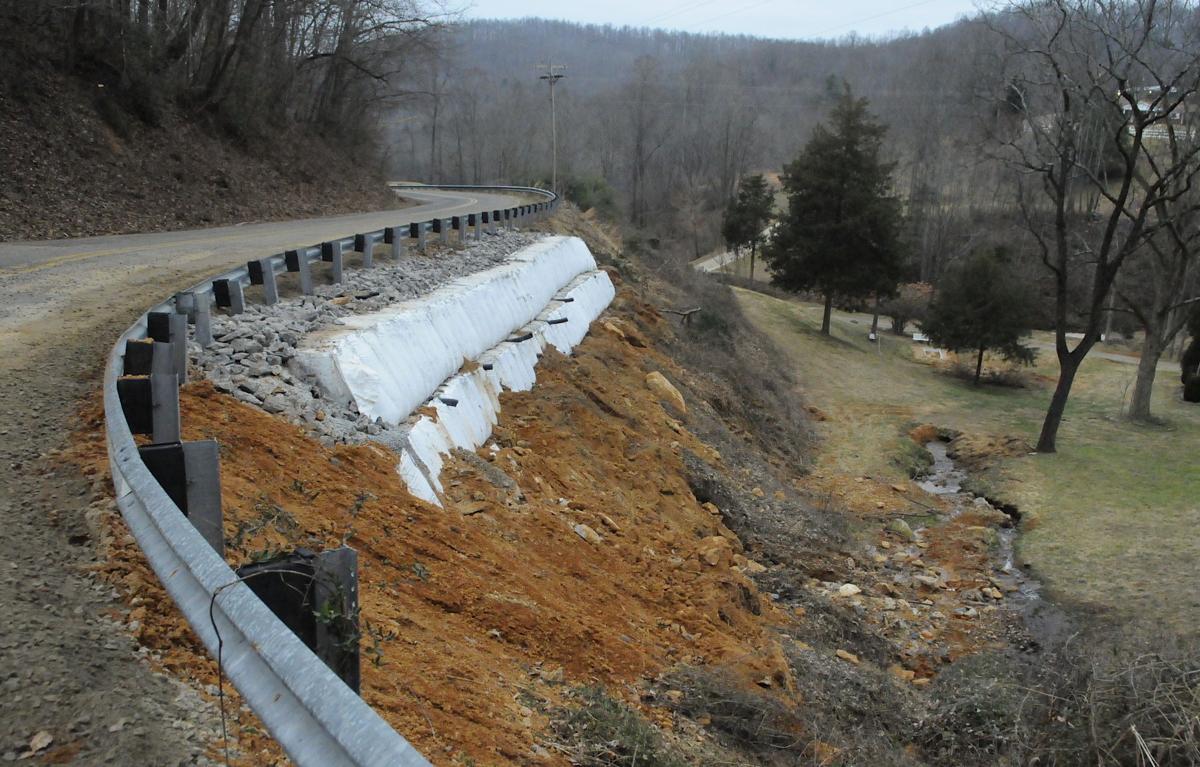 A slope that collapsed on the side of Brushy Mountain Road on Nov. 12 has been repaired by the N.C. Department of Transportation. The site is near the Trails End Road intersection.

Equipment is in place to start rebuilding the Hose Road bridge over Rocky Creek near Brushy Mountain Road on the “backside” of the Brushy Mountains. The bridge was swept away by floodwaters Nov. 12.

A slope that collapsed on the side of Brushy Mountain Road on Nov. 12 has been repaired by the N.C. Department of Transportation. The site is near the Trails End Road intersection.

The N.C. Department of Transportation is repairing road damage in Wilkes County that resulted from a year with record rainfall.

Todd Spurlin, DOT Division 11 maintenance staff engineer, shared a list of about 60 washouts, landslides and other damage sites on public roads in Wilkes that occurred in 2020. It includes repair costs, which add up to about $3.34 million.

There was a cumulative effect but most of the damage was apparent after heavy rainfall in brief periods, especially when remnants of Tropical Storm Zeta hit Oct. 29 and Tropical Storm Eta on Nov. 12. “To put things in prospective, Eta was our 14th named storm event since Alberto in May of 2018,” said Spurlin.

He said money for the repairs has been approved by DOT officials and will be covered by the emergency and disaster funding set aside each year. He added that the DOT should be eligible for a certain level of reimbursement with federal funds under a disaster designation.

Most of the projects on the list are scheduled for completion April 1, May 1 or June 1.

“We have received approval to proceed with repairs for all of these sites so I’m hopeful that all work will be finished earlier than the completion dates shown,” said Spurlin.

Repairs to a slope that collapsed around a culvert outlet on the lower side of U.S. 21 where it climbs the Blue Ridge Mountain escarpment have a listed cost of $750,000, the most of any project. This work in the northeastern corner of Wilkes is finished, except for top dressing where grass was seeded.

Next most costly is repairing two landslides on the seldom-traveled gravel portion of Old N.C. 16 in the Wilbar community, leaving the roadway about 10 feet wide. Work on this $600,000 project, also on the escarpment of the Blue Ridge, hasn’t started yet.

Several $100,000 to $150,000 projects are listed, including replacement of a large culvert washed out on Hunting Creek Road in southeastern Wilkes. Work on this hasn’t started because the new culvert hasn’t arrived. The site is about four miles from the intersection of N.C. 115 and Hunting Creek Road.

Replacement of culverts at two sites on Somers Road in southeastern Wilkes, projects costing $100,000 apiece, haven’t started. Completion of both is scheduled May 15. One is near the Redding Road intersection and the other near the Union Baptist Church Road intersection.

Replacement of a bridge washed out on Hose Road in the Brushy Mountain community started this month. Completion of the $150,000 project is scheduled June 1. A collapsed slope of Brushy Mountain Road nearby where the road crosses a small stream has been repaired at a cost of $120,000.

A culvert replacement on Greenhorn Road near the Bethany Ford Road intersection is to be completed by Oct. 15. A survey is needed and the culvert had to ordered. The cost is $135,000.

A culvert was replaced on Shepherds X Road near the Greenhorn Road intersection for $100,000 and on Fishing Creek Arbor Road for $120,000. Only top dressing and final paving is left on both projects.

Culverts were replaced on Osborne Creek, Chambers and Ingle Hollow roads in southeastern Wilkes. A $100,000 slope stabilization project was completed on Colony Drive in North Wilkesboro and a smaller such project was completed on Country Club Road in Oakwoods. Repairs on Moore Road in southeastern Wilkes, Elk Creek Road in Ferguson and Brushy Lane on the Brushies have been completed.

Wilkesboro Town Manager Ken Noland said Woodfield Way will be closed for most of 2021 due to a washout where it crosses Cub Creek. This at the point where Woodfield Way connects the Woodfield and Oakwoods Country Club subdivisions, which also is the town limits. Noland said about 75% of the estimated $1 million cost of these repairs is supposed to come from the state due to Wilkes being included in a disaster declaration. He said funds will also be sought from county government.

Partly cloudy skies during the evening will give way to cloudy skies overnight. Low 44F. Winds SW at 5 to 10 mph.