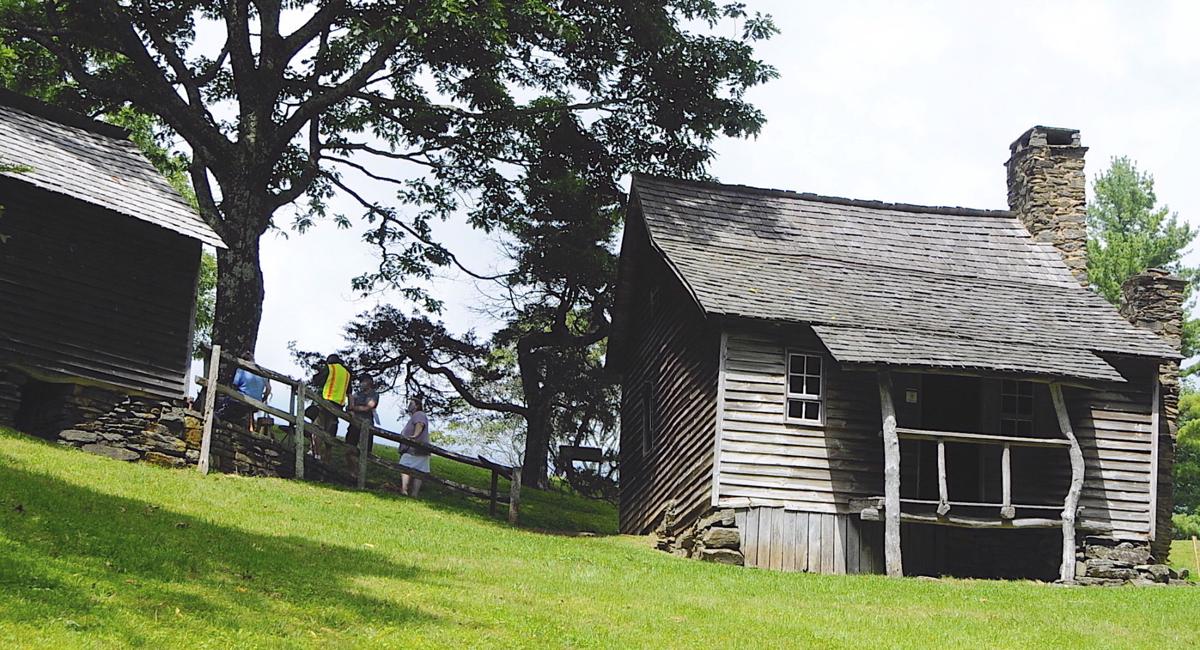 Despite the distance of the Martin and Caroline Brinegar homestead from other families, they maintained close connections with neighbors. 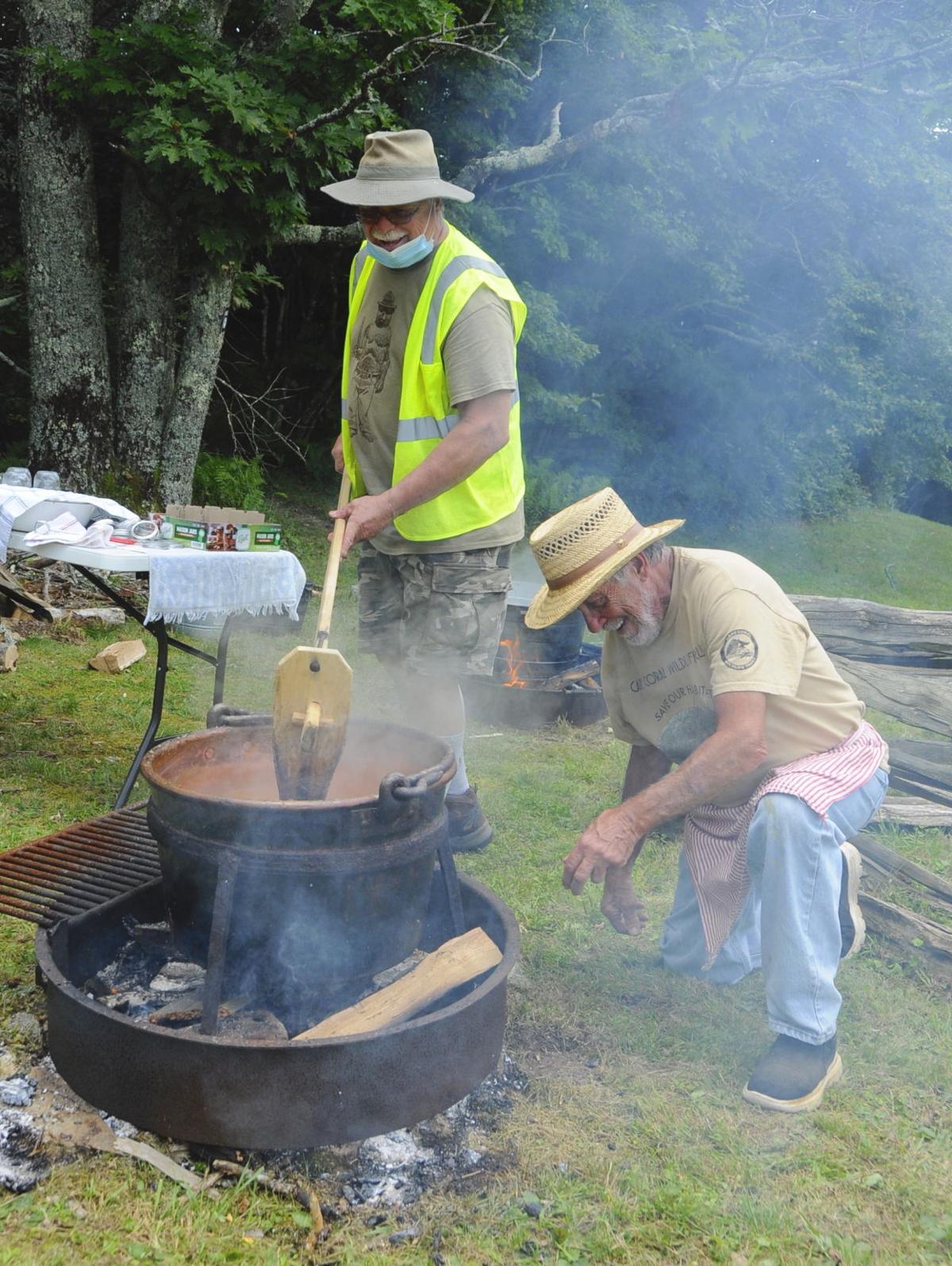 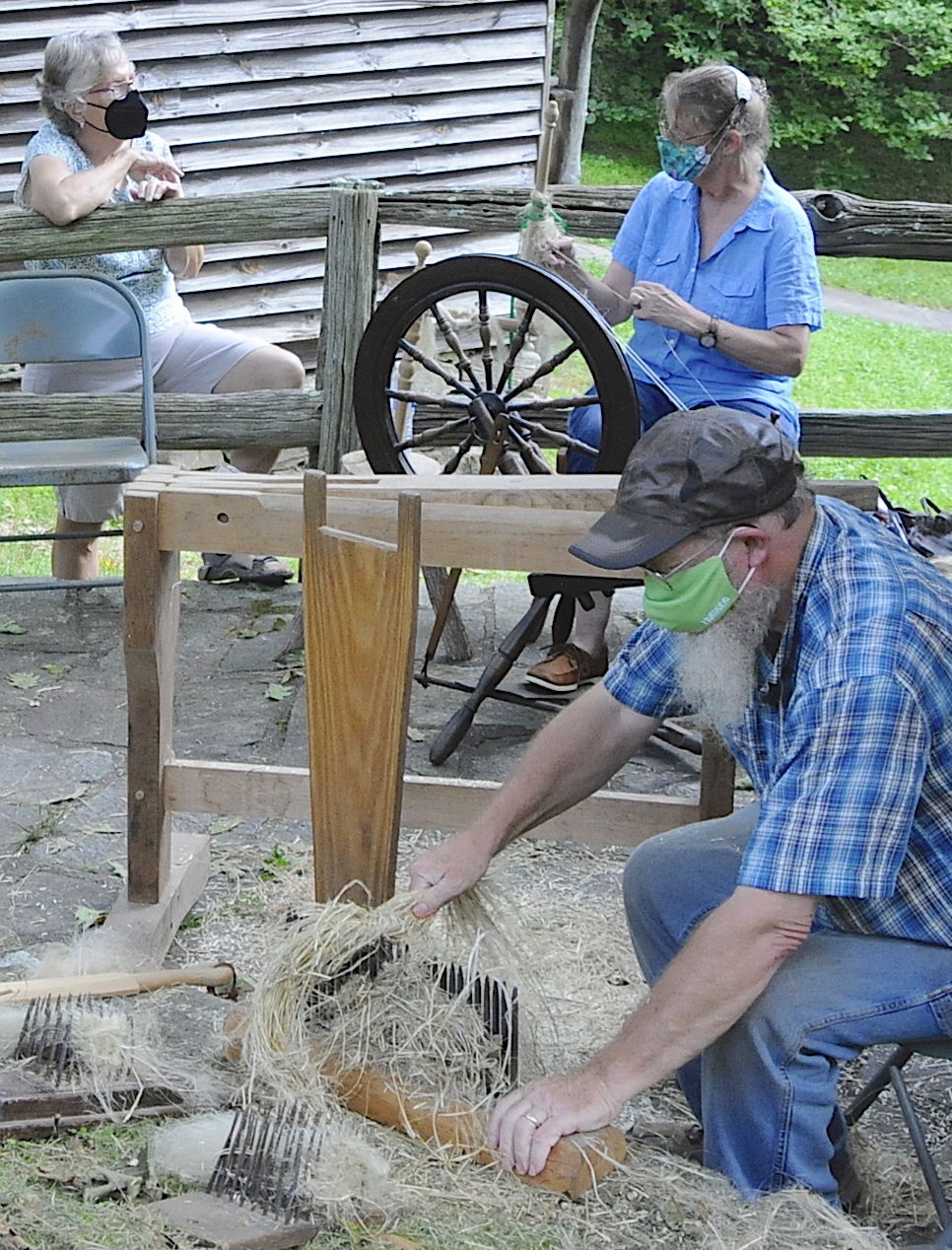 Jamey Smith pulls shocks of flax through a hackle to remove the outer hull and inner pith, leaving only the fiber. He already used the flax break, beyond his right shoulder, for this process. Lucy Smith, his wife, uses a spinning wheel to make thread from the flax. They’re demonstrating during Brinegar Days.

Lucy Smith uses a spinning whee to make flax thread. She and her husband, Jamey Smith, are from Galax, Va. 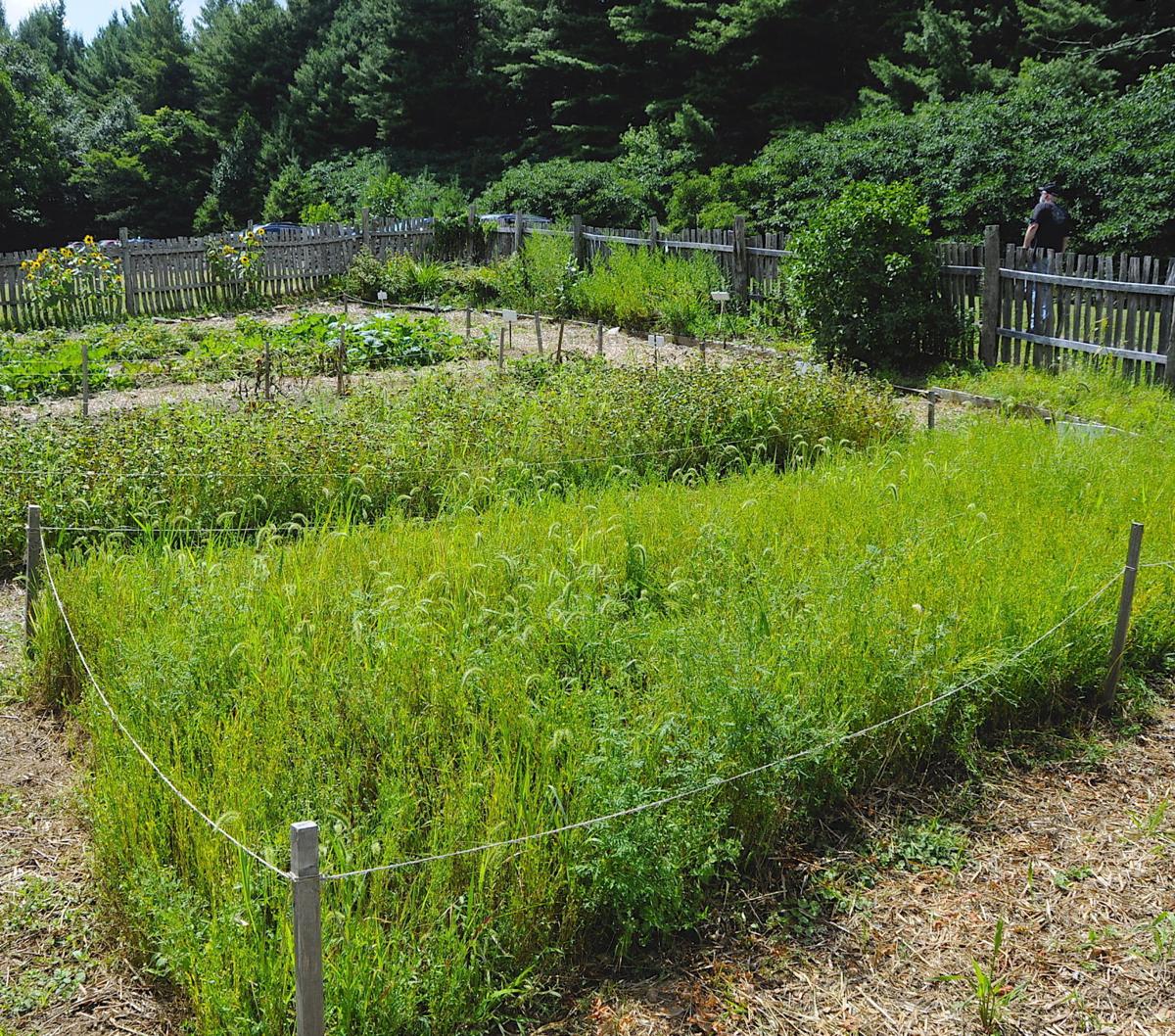 Flax, in foreground, grows in a demonstration garden on the Brinegar homestead along the Blue Ridge Parkway.

Despite the distance of the Martin and Caroline Brinegar homestead from other families, they maintained close connections with neighbors.

Jamey Smith pulls shocks of flax through a hackle to remove the outer hull and inner pith, leaving only the fiber. He already used the flax break, beyond his right shoulder, for this process. Lucy Smith, his wife, uses a spinning wheel to make thread from the flax. They’re demonstrating during Brinegar Days.

Lucy Smith uses a spinning whee to make flax thread. She and her husband, Jamey Smith, are from Galax, Va.

Flax, in foreground, grows in a demonstration garden on the Brinegar homestead along the Blue Ridge Parkway.

Relationships between families in the area that includes today’s Doughton Park on the Blue Ridge Parkway in the late 1800s and early 1900s was a focus of a recent event.

Descendants of families who lived in that part of Wilkes and Alleghany counties before the Parkway was built in the late-1930s were invited to the annual Brinegar Days on Aug. 28 at the cabin of the Martin and Caroline Joines Brinegar family on the eastern edge of Doughton Park.

The cabin is about 50 yards south of the Parkway and the crest of the Blue Ridge Mountains (Eastern Continental Divide) at an elevation of about 3,500 feet.

The Brinegar home and nearby springhouse and barn were restored in the early-1940s and for decades have been used to give Parkway visitors a glimpse of old ways of life. Martin Brinegar completed the cabin in the late 1880s.

Jamey and Lucy Smith of Galax, Va., showed how Caroline Brinegar and others made thread from flax. Using a four-poster loom built by her father, Ezekial Joines, Caroline spun flax thread with wool thread to produce linsey-woolsey, a fabric she used to make most of her family’s clothing. Flax thread gave it strength.

Jamey Smith used a wooden flax break to remove outer hulls from handfuls of grass-like flax about 10 inches long, harvested from the nearby demonstration garden. Next, he pulled the shocks through a hackle (rows of nails in a board) to remove more unwanted material. Lucy Smith spun the shocks of flax into thread with a spinning wheel.

The 100 or so people at the latest Brinegar Days included representatives of the Brinegar, Caudill, Joines, Crouse, Miller, Holloway and other families with roots in that vicinity.

Barry M. Buxton described how steep mountain terrain and lack of roads left homes scattered and promoted self-reliance in a 1988 report from his research on the Brinegar homestead and lives of the Brinegars for the National Park Service. Buxton was executive director of the Appalachian Consortium in the 1980s and later president of Lees-McRae College in Banner Elk.

Still, “neighbors” were dependent on each other for help when illness and other difficulties arose and for shared labor when necessary for such things as house raisings. They often were kin.

The Brinegars “learned the necessity for self-reliance and practiced it in their daily lives. But when the burdens of life were too much to bear, they could always count on help and be counted on to give it,” wrote Buxton.

Brinegar was a justice of the peace and notary public. He also was a cobbler, making shoes known for their longevity for neighbors and his family from leather purchased from the tannery in North Wilkesboro.

Buxton said the closest neighbor to the Brinegars in the early 1900s was the Elbert Crouse family, in the Pine Swamp section over a mile away just north of the Doughton Park campground. The Alexanders lived about four miles directly south of the Brinegars on Longbottom Road at an elevation of about 1,500. These Crouse and Alexander homes are still standing.

In an interview with Parkway Ranger Jackie Sloop, the late Robert Alexander recalled Martin Brinegar walking down Cedar Ridge to the Alexander home on Election Days.

Alexander said he and his brother, Charlie, herded sheep up Cedar Ridge to the Brinegars to free range graze each summer. When the sheep were sheared in early spring, half of the money from the fleeces sold to Chatham Mills in Elkin went to the Brinegars and half to the Alexanders. Two fleeces also went to Caroline Brinegar and two to Alexander’s grandmother.

Brinegar used the Air Bellows Gap Road down the mountain when it was time to pay his county taxes in Wilkesboro. Although it’s a state-maintained road in Alleghany, the Wilkes portion no longer is open.

There were other homes relatively close by, including in Basin Cove directly below and southwest of the Brinegar cabin and now in Doughton Park.

Basin Creek Union Baptist Church and a nearby store were a little over a mile from the Brinegar cabin as the crow flies, but a straight-line route wasn’t practical due to steep terrain and a 2,000-foot drop in elevation. The church also served as a school.

There were 40 to 50 households in Basin Cove prior to heavy damage there from landslides during the 1916 flood. Martin and Janie Caudill of Basin Cove gathered their children and fled up the mountain to the Brinegar cabin when the flooding started. They stayed three days with the Brinegars.

Three other members of the Caudill family perished when their cabin in Basin Cove was swept away by a landslide. The community was virtually destroyed by this natural disaster, with less than 10 families living there when the Parkway was built.

In 1934, a huge forest fire on the Blue Ridge escarpment nearly reached the Brinegar cabin. Forming a fire brigade, neighbors and the Brinegars shuttled buckets of water from the spring to Caroline Brinegar on the roof. She kept the cabin from igniting by pouring water on the shingles.

Martin Brinegar had died almost 10 years earlier from pneumonia after getting caught in a cold rain on the nine-mile return trip from attending services at Pleasant Grove Union Baptist Church, on what now is Roberts Road about a mile south of N.C. 18 in Laurel Springs.

He served as church clerk for more than 25 years and was known for faithfully attending services, held twice a month and lasting from 11 a.m. to 2 p.m.

The Union Baptists had strong Union sympathies during the Civil War and were known as “Lincoln Republicans.” They were especially prominent in northern Wilkes.

There are records of deadly encounters between pro-Union residents of northern Wilkes and pro-Confederate Alleghany residents during the war, a sensitive issue in some families for generations.

The fathers of both Martin and Caroline Brinegar served in the Confederate Army. Brinegar’s father, John William Brinegar, died in Virginia during the Civil War.

Buxton said Martin and Caroline Brinegar were among members of Pleasant Grove Union Baptist who helped ex-slaves settle in Basin Cove after the war. He noted that many of those pro-Union families are Republicans to this day.

Although no longer the case, political registration in Alleghany County once was overwhelmingly Democratic.

John Brinegar, son of Martin and Caroline, lived in North Wilkesboro and stated in an interview with the Journal-Patriot in 1969 that the Brinegar cabin was in Alleghany until officials in that county had the county line moved to put it in Wilkes because his father was a Republican.

John Brinegar and his mother sold 88 acres of their farm, including the cabin, to the National Park Service for $1,000 in December 1935. The sales agreement allowed Caroline to remain in the cabin for the remainder of her life, but she soon moved.