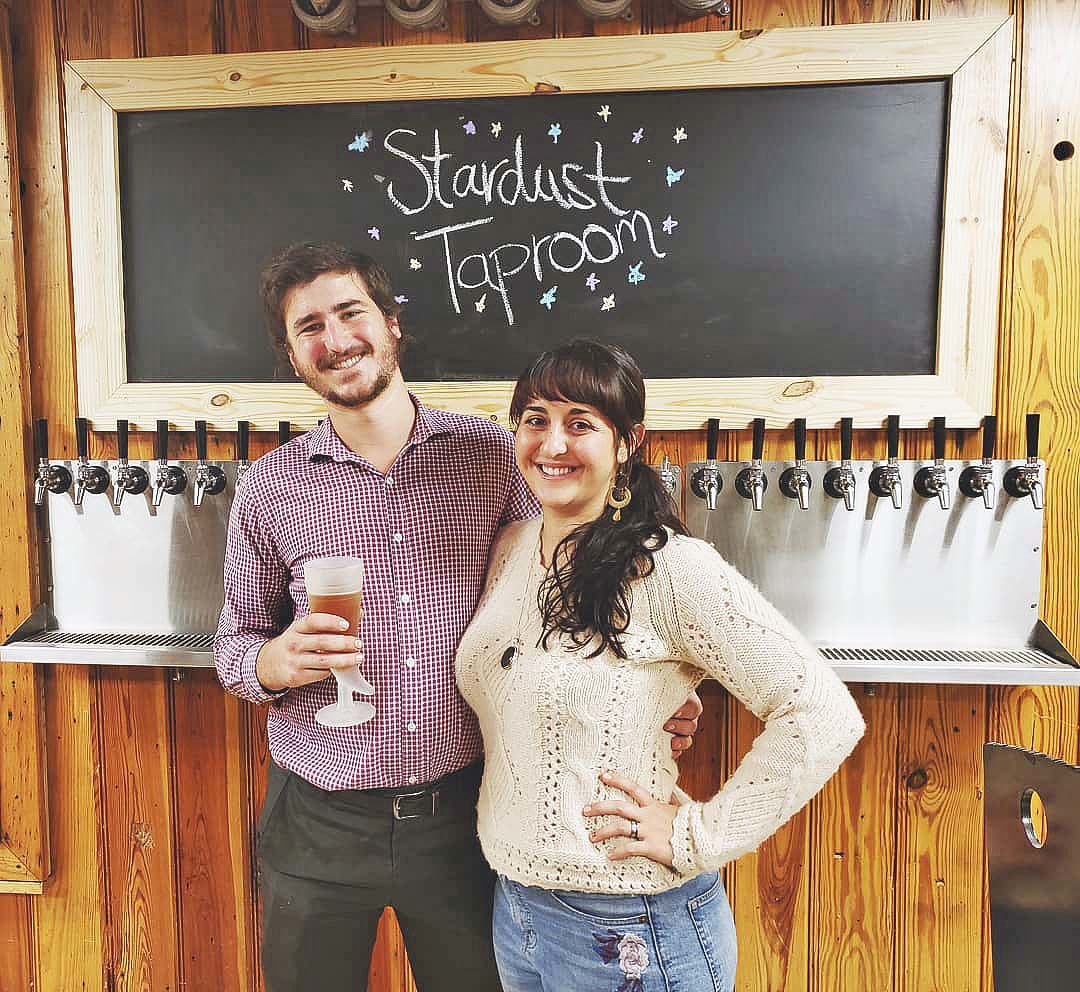 STARDUST CELLARS owners Nick and Kaitie von Cosmos opened a taproom on Oct. 25 at 1202 Curtis Bridge Road, Wilkesboro. The couple hand crafts the mead and wine sold inside the taproom. 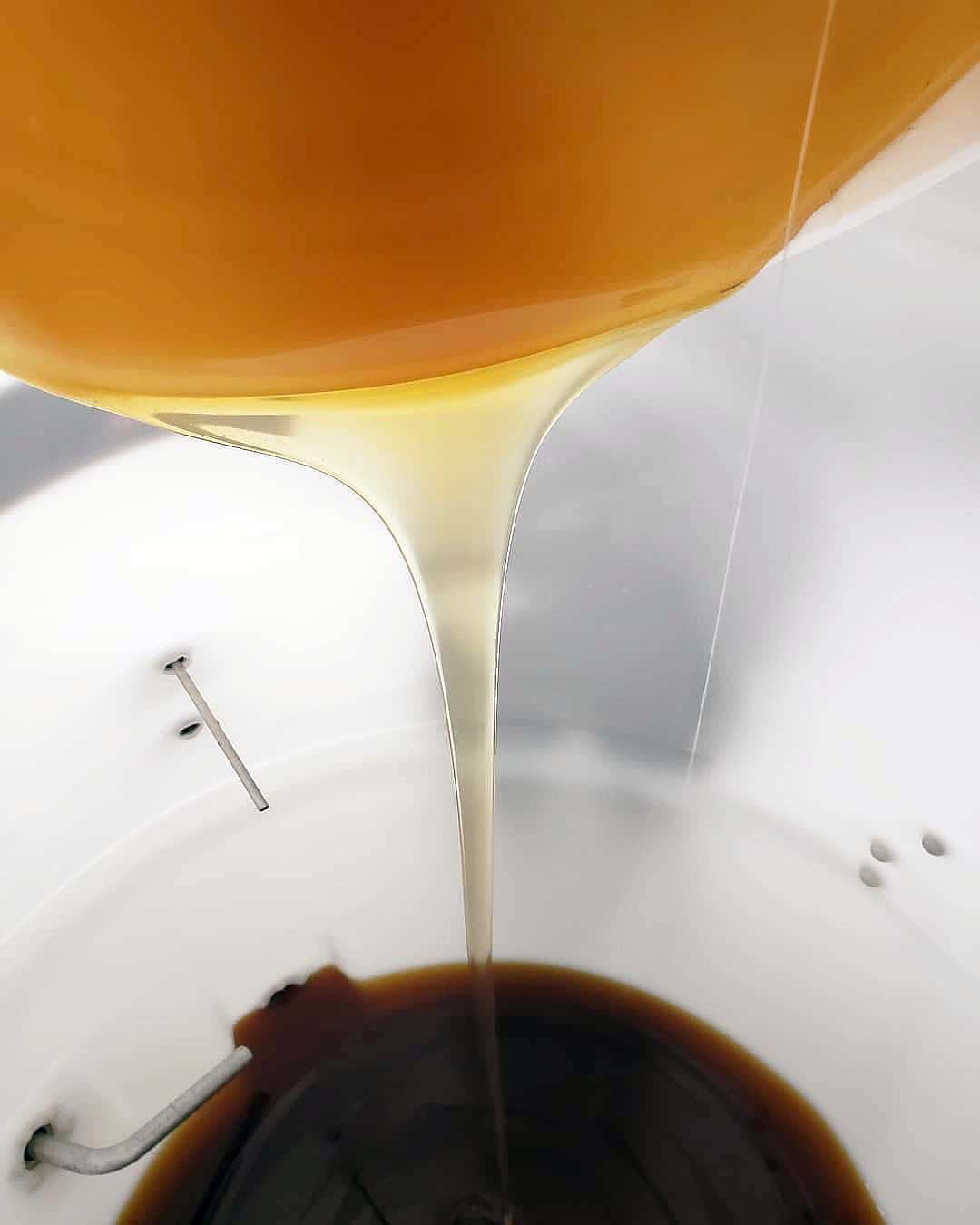 LOCAL HONEY from H.S. Greene’s Hidden Happiness Bee Farm just below Deep Gap in Wilkes County is poured into a fermentation vat, the first step in the making of Stardust Cellar’s ancestral mead, which is 14% alcohol by volume.

STARDUST CELLARS owners Nick and Kaitie von Cosmos opened a taproom on Oct. 25 at 1202 Curtis Bridge Road, Wilkesboro. The couple hand crafts the mead and wine sold inside the taproom.

LOCAL HONEY from H.S. Greene’s Hidden Happiness Bee Farm just below Deep Gap in Wilkes County is poured into a fermentation vat, the first step in the making of Stardust Cellar’s ancestral mead, which is 14% alcohol by volume.

Stardust utilizes local resources and stresses the importance of sustainability and interconnectivity. Its name was inspired by the concept popularized by the late astronomer Carl Sagan, who famously said, “We are all stardust.”

Kaitie von Cosmos said the Sagan quote “expresses the idea that we are all interconnected; the nutrients and microbes in the soil, what makes up the grapes and the bees, what was in the breath of those who walked before us, is also what is in us.”

The married couple moved from San Diego, Calif., to the Brushy Mountains of Wilkes to escape city life and start a farm in 2016. “We were at a crossroads deciding between continuing in academia or starting head-on into business,” said Nick, who studied biochemistry at the University of California at Santa Barbara. Kaitie pursued botany and environmental science before moving here.

“We took the leap and chose Wilkes County for its access to beautiful natural surroundings: water, mountains, forest, rivers, creeks and plenty of affordable farmland,” he said, adding that the up-and-coming Yadkin Valley wine region industry was another big draw.

They grow grapes used for wine production both at their home on the Brushies and at the former location of The Round-Up nightclub off N.C. 115 South, where they established a winery in 2018 and future event space and tasting room. “We believe that the local terrain has a lot to offer and we love promoting this through our fermentations,” said Nick.

The Brushies are part of the Swan Creek American Viticultural Area (AVA), a sub-appellation of the Yadkin Valley AVA. Established in 2008, Swan Creek AVA also includes parts of Yadkin and Iredell counties.

On their mountain farm, the von Cosmoses grow a mixture of produce and herbs and prioritize those flavors in their meads. They have utilized their own Jarrahdale pumpkins, blueberries, mint and hops in their beverages and plan to use strawberries, sage, apples, peaches, pears and even some wild-foraged ingredients in forthcoming meads.

“We do source our honey and other ingredients locally as well as our grapes from a vineyard in the Ronda area while we wait for our vines to mature,” said Kaitie.

“We get our ginger from Tumbling Shoals (a farm in Millers Creek) and some hops grown locally by a woman right by Kerr Scott (Reservoir). Wilkes has a lot to offer, especially agriculturally, and we like to showcase this heritage through our products.”

Nick said they’re passionate about making mead. “You can make it as simple or complex as you want, and we do both. The key is the quality of ingredients and patience.”

He said their ancestral mead is made from three parts water and one part raw wildflower honey from H.S. Greene’s Hidden Happiness Bee Farm just below Deep Gap in Wilkes. He said most meads are made with more water in the mixture, as it’s cheaper to produce, but “we prefer a stronger mead with the full flavors of heavy-handed honey. We shoot for 14% ABV (alcohol by volume).”

To make mead, they laboriously stir raw honey and cold water three times a day for three to five weeks. They use an egg-shaped fermenter at low temperatures, which prevents loss of the “beautifully complex flavors that exist in raw honey,” and allows the yeast to spin naturally in the solution, noted Nick.

Once the mead reaches about a 1.2% sugar content, they move the mead fermentation tank into a walk-in cooler, where the yeast settles out at near-freezing temperatures. When the mead is clear, they keg it and store in a heated room to allow the small bits of yeast still alive to re-ferment in the keg.

“Anyone familiar with method ‘ancestrale’ (or Pét-Nat) wines might see some similarities here,” noted Nick. “It’s a more controlled modern methodology I created but is certainly based on the ancient methods that a cold winter would naturally create by stopping a fermentation early before bottling and having the wines come back to a carbonated life when spring comes back around.”

N.C. GreenTravel, an initiative of the N.C. Department of Environmental Quality, gave Stardust its highest sustainability rating of “Three Dogwood Blossoms” in September.

The rating was awarded, noted Kaitie, because Stardust strives to reduce its waste output through using only environmentally-friendly cleaning solutions, composting grape waste, recycling bottles and caps, and avoiding single-use plastics and other items in favor of reusable, sturdy materials.

“We have taken every measure within our reach to be as Earth-conscious as possible,” she said. “We look forward to having the finances to invest in solar at a future point (to become) completely off-grid.”

Stardust has a recycling program in which bottles are returned for $2 off a customer’s next bottle. The bottles are cleaned, sanitized and then reused. The von Cosmoses use only paper labels and have zero plastic waste from their facility and products they sell.

They use both natural cork and steel bottle caps, which are collected for recycling in containers at their taproom. At their home vineyard, they do everything by hand, without using irrigation methods, machines or fertilizers. They grow Cayuga White hybrid grapes, which are specifically resistant to black rot and powdery mildew.

This allows them to use no sprays on their crops, organic or otherwise. For mulch, they use wood chips discarded by local forestry activities. Next year they plan to raise sheep and alpacas to weed between vineyard rows and reduce reliance on machine-mowing.

Stardust Cellars & Taproom is in Brushy Mountain Water Company building on Curtis Bridge Road, owned by local businessman Sonny Church. The couple is in talks with breweries about sub-leasing Church’s beer-brewing space and equipment at the taproom.

“We will have beers made in-house behind the taproom on tap for our guests and look forward to our braggots (beer/mead combinations) we plan to make with our future collaborators behind the scenes,” added Kaitie.

There’s plenty of events planned at the Stardust taproom, including trivia on Friday nights (starting tonight), food trucks scheduled every day and monthly musical acts. The couple is hosting the Mountain Laurels, a Celtic/Appalachian roots band, on Nov. 16, and Mikie Huffman, a musician delving in Americana, country and rock, on Dec. 7.

“We will in due time be hosting yoga, spoken word, board game nights, and bingo events,” added Nick. The taproom is open Thursdays and Fridays from 5-10 p.m., Saturdays from 3-10 p.m. and Sundays noon-5 p.m.

Partly cloudy skies during the evening will give way to cloudy skies overnight. A stray shower or thunderstorm is possible. Low 66F. Winds light and variable.