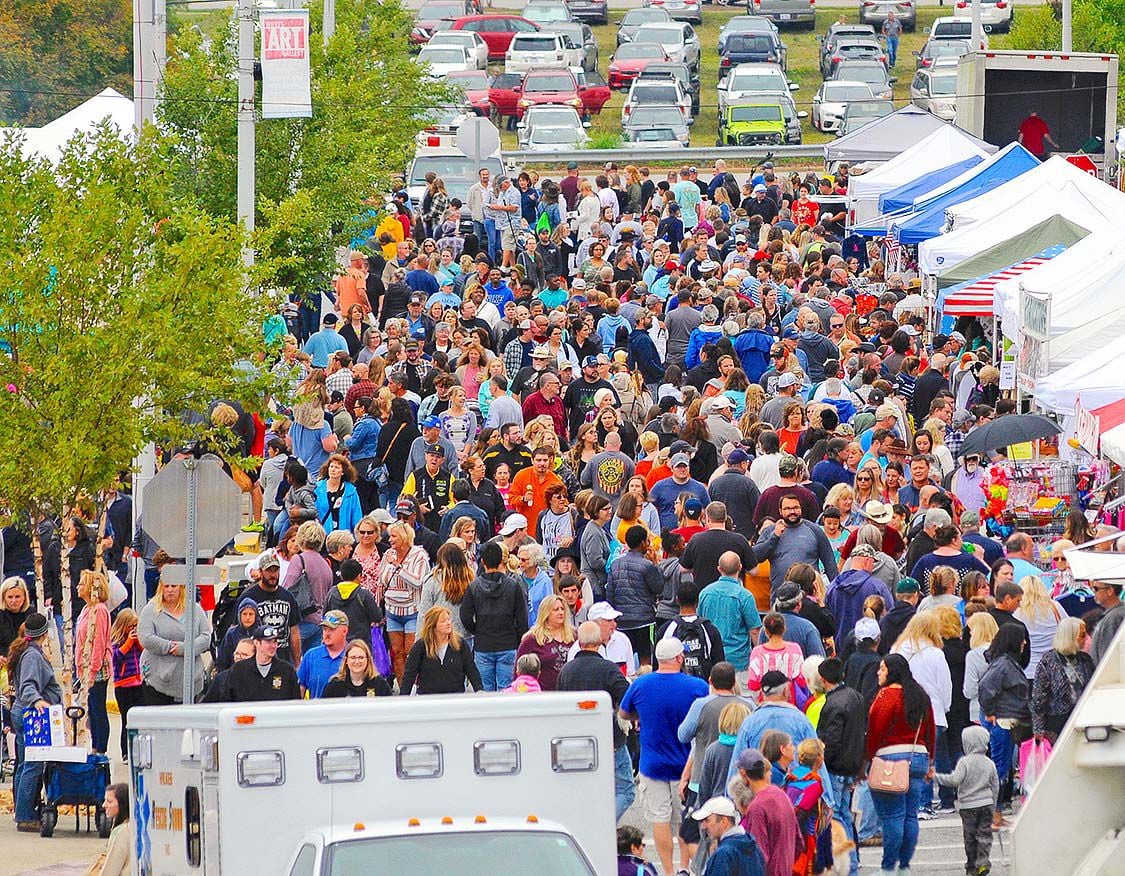 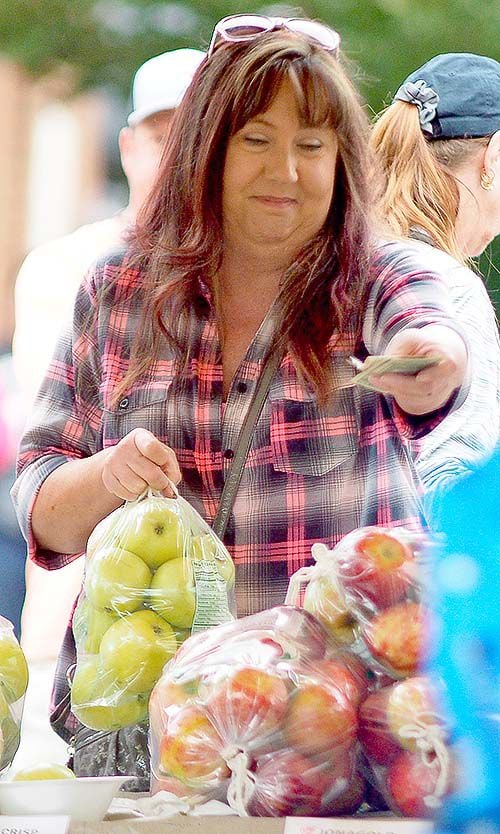 A HAPPY CUSTOMER hands over her money for a bag of apples at the Perry Lowe Orchards stand during the Brushy Mountain Apple Festival in downtown North Wilkesboro.

Highs in the mid-60s Saturday after two weeks of highs in the upper 80s and low 90s helped produce the largest attendance in many years. Light misty rain that morning didn’t slow it down.

Brushy Mountain Ruritan Club President Bob Laney estimated a turnout of about 90,000 people and said streets were packed the biggest part of the day.

Members prepare for the event throughout the year and take turns fielding questions at an information booth in the intersection of Ninth and Main streets during the festival.

Festival-goers ask about everything from locations of port-a-jons and automated teller machines to particular vendors, products and heritage demonstrations. The change in the weather apparently heightened appetites.

“This year, everybody seemed to want fried apple pies. That was the big question,” said Laney. They also were seeking whole baked apple pies.

Most, if not all, vendors with hand-held fried apple pies sold out Saturday, as did the one vendor selling whole baked apple pies, Leicestor-based Paris Festival.

All of the Brushy Mountain Fire Department’s 4,000 fried apple pies were sold by noon. Tony Stewart, former Brushy Mountain chief, said the stand had four lines of customers stretching to the other side of the street Saturday. The last 31 pies, held back because they were burnt, were sold to the same woman.

The fire department’s stand has been at the same location (near the information booth on Main Street) since the second festival. The first festival was on then-vacant commercial property on U.S. 421 West in Wilkesboro.

Saturday’s event is the largest fundraiser of the year for the Brushy Mountain VFD and many other local nonprofits.

The Champion VFD’s two largest fundraisers are the apple festival, where it has sold barbecue sandwiches for 39 years, and MerleFest, where it oversees a parking area at River’s Edge campground.

Many people coming to the information booth wanted to know where they could find barbecue sandwiches. The Champion VFD and North Wilkesboro Kiwanis Club both sold out of them early Saturday afternoon.

Crozet, Va.-based Blue Ridge Kettle Korn had long lines of customers and a spokesman there said business Saturday was the best of that vendor’s six Brushy Mountain Apple Festivals.

Golden Delicious apples coated with caramel and Ghiradelli chocolate and topped with everything from peanut butter to crushed Oreos were a favorite, with Hickory-based Apple Delights again selling them. This year, customers didn’t have to fret over them melting.

Next door to this Main Street vendor, Shannon Zielke of Dallas (in Gaston County) and a helper manned the Hillbilly Bob’s Homemade Soda stand with root beer, cream soda, black cherry and grape for $5 a serving—plus $3 per refill if you needed an even bigger sugar jolt.

The apple festival is the best day of the year for many restaurants in the downtown area and Saturday was no exception. Other downtown business owners were also pleased with sales Saturday.

Bella’s Florals & Design at 302 10th Street, in its first year, normally closes at 1 p.m. on Saturdays but owner Lisa Shore extended hours to 5 p.m. on the day of the festival. Shore said her normal Saturday sales were tripled.

Jody Johnston, owner of Hero Clash Collectibles at 217 Ninth Street (former Rhoades News Stand), said his business was up about 50% for a Saturday. His normal Saturday hours are noon to 6 p.m., but he was open from 8 a.m. to 5 p.m. for the festival.

Food and live music from three stages and dancing on a fourth, the festival’s 100 or so arts and craft vendors make the event an annual pilgrimage for many families.

Terry and Kathy Lipford Hunt of North Wilkesboro were at the festival with their four daughters, Christy Hunt Webster of Winston-Salem, Veronica Hunt Jones of Raleigh, Lakeisha Hunt Wolfe of Greensboro and Naomi Hunt of Wilkesboro, along with some sons-in-law and five of their 10 grandchildren. Their daughters were pregnant with all but one of the grandchildren at earlier festivals.

Many vendors say the apple festival is their most profitable event. Club member Ray Stone, the festival’s longtime coordinator of arts and crafts vendors, said there were more at this year’s event. Stone said newcomers included Ray Butler of Florida selling pottery made by the Cherokee Indians and indigenous people in Central America.

Self-taught artist Lindsey Veil of Hickory was pleased with the results of her first time there. Veil paints portraits and other subjects, but her creations with the music and lyrics of well-known hymns attached to wood for display sold best Saturday. Veil sold about 60 for as much as $225 apiece and took orders for more.

The Brushy Mountain Ruritan Club invested in improvements to its online vendor application process and its entire digital presence this year, with club members Carroll Lowe and Jon Snider in charge of this effort. Most vendors sign up for the same booth locations year after year.

By the time town personnel finished cleaning up downtown, there was little to indicate that tens of thousands of people were there that same day.

Showers in the evening with some clearing overnight. Low 32F. Winds light and variable. Chance of rain 40%.