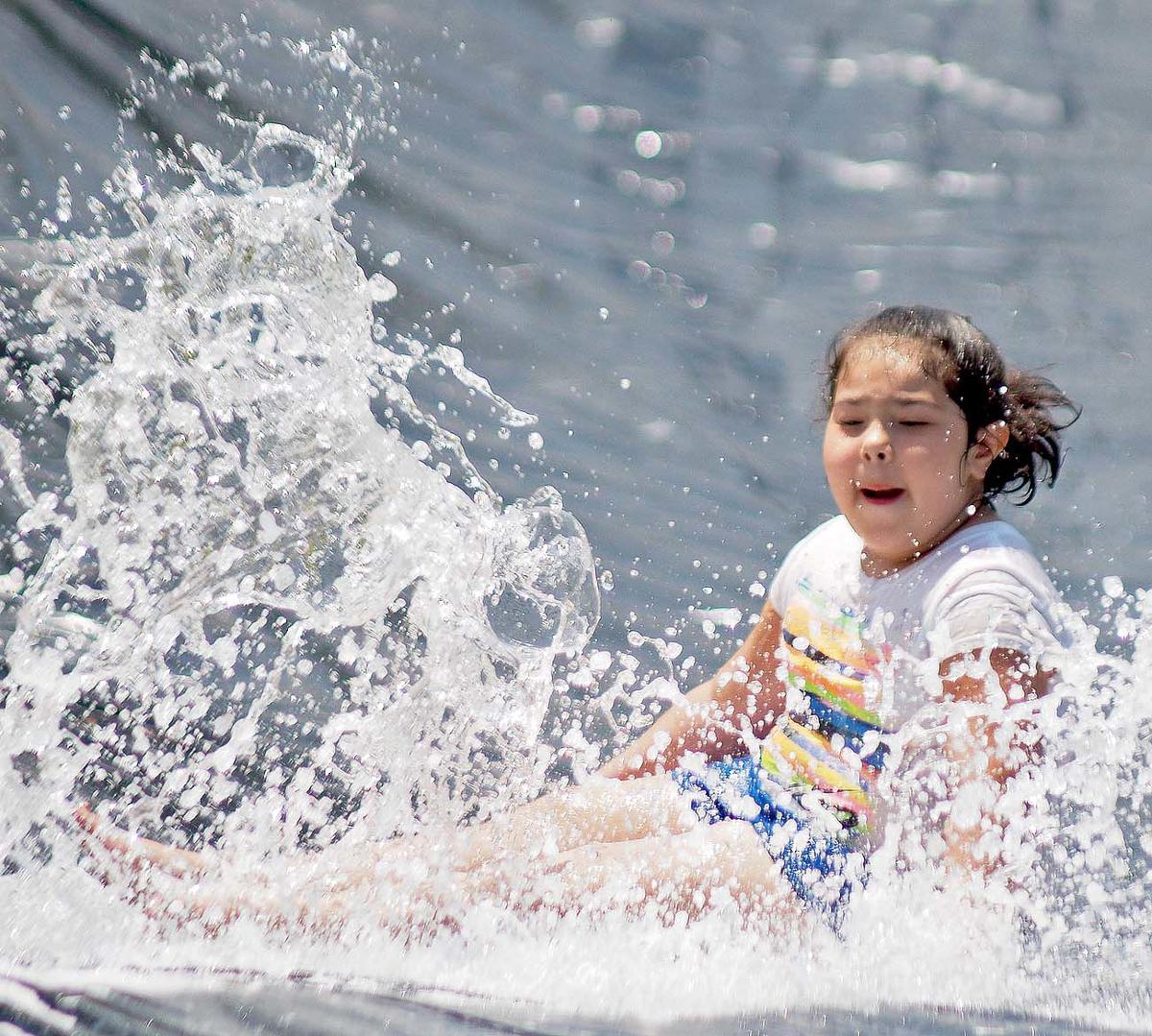 PREPARING FOR SUMMER vacation, Jaslynn Menjivar enjoys a water slide set up by the North Wilkesboro Fire Department at North Wilkesboro Elementary on Tuesday. She is in Angela Porter’s kindergarten/first grade class. Thursday was the last day of classes for the Wilkes school year. Three Wilkes high schools have graduation ceremonies tonight and two already held them. 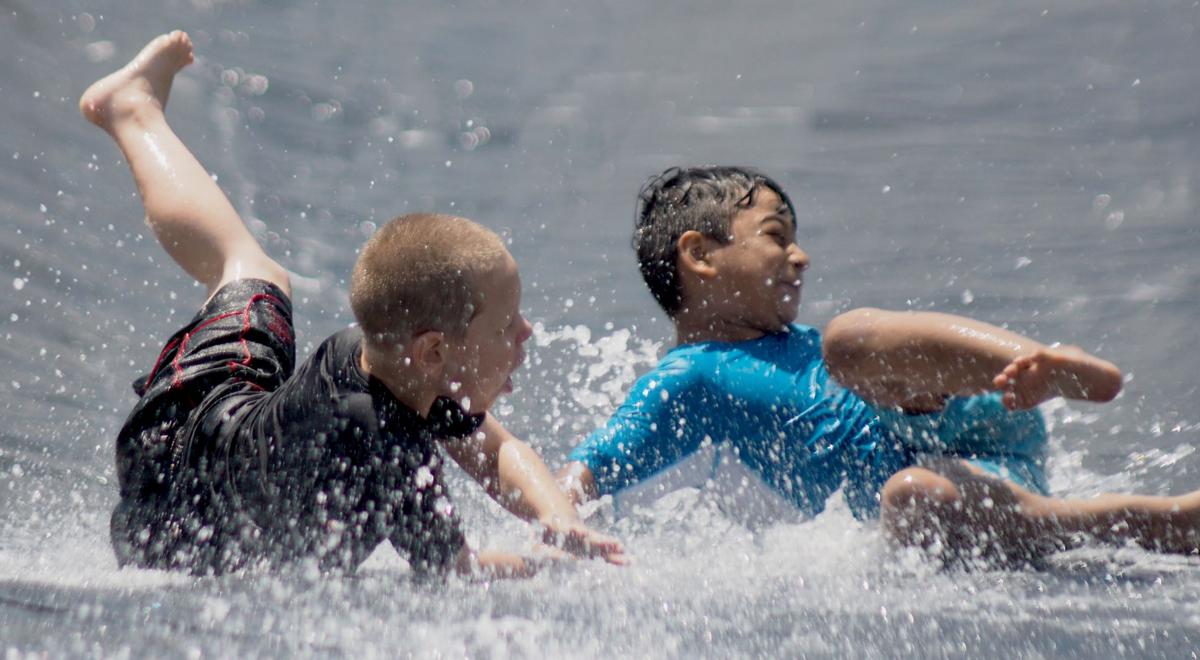 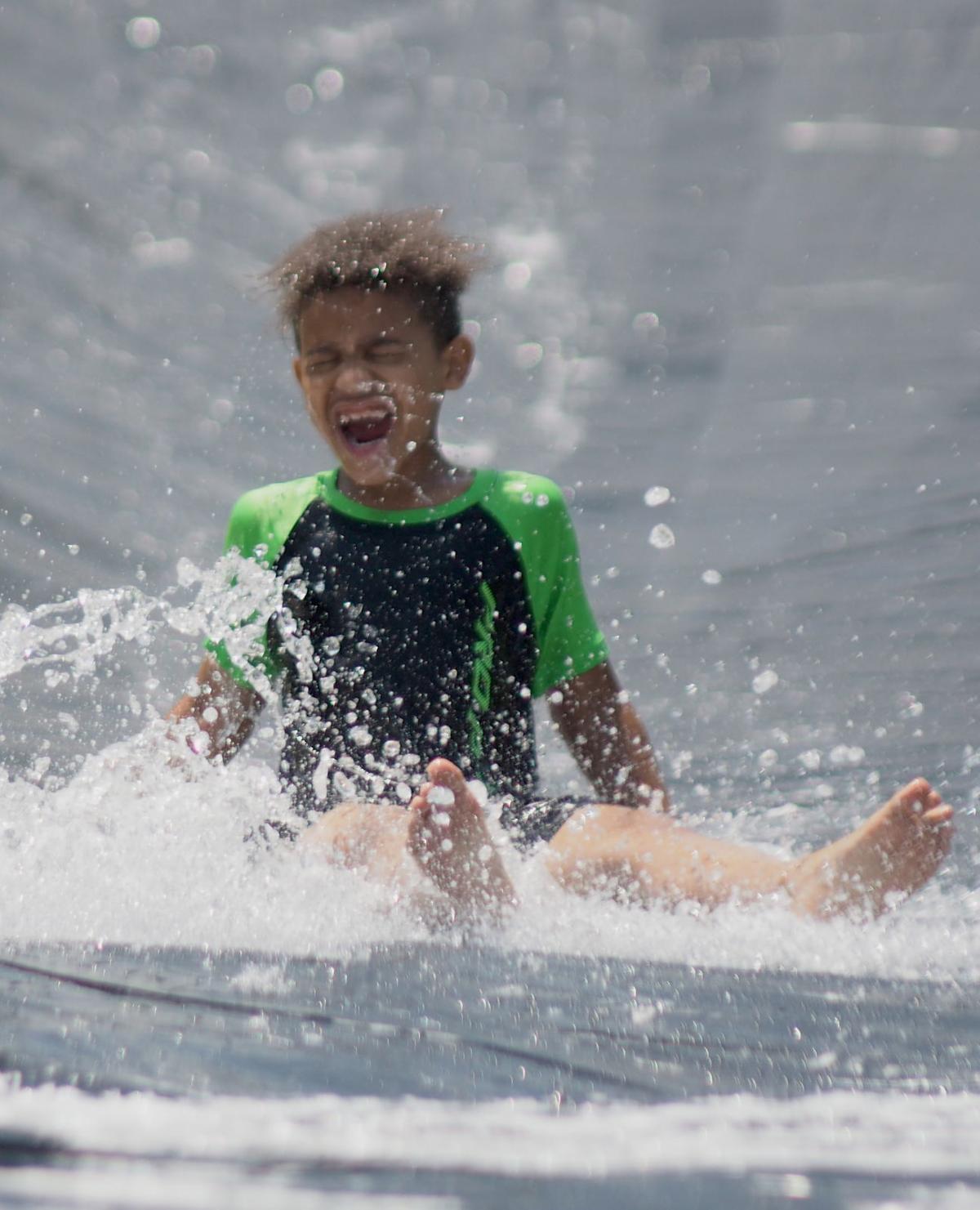 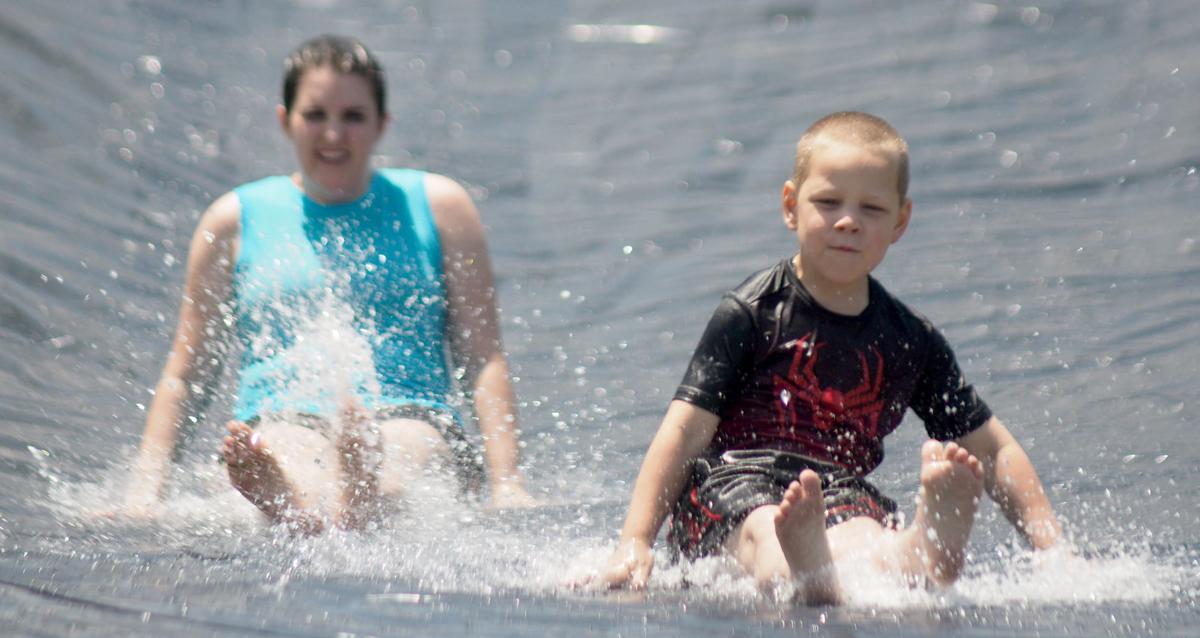 PREPARING FOR SUMMER vacation, Jaslynn Menjivar enjoys a water slide set up by the North Wilkesboro Fire Department at North Wilkesboro Elementary on Tuesday. She is in Angela Porter’s kindergarten/first grade class. Thursday was the last day of classes for the Wilkes school year. Three Wilkes high schools have graduation ceremonies tonight and two already held them.

The five Wilkes County public high schools have 690 seniors graduating this year, about 8 percent less than last year’s 752. The class of 2018 was among the largest in Wilkes since the late 1980s.

The Latin system of honors for graduates was used for the first time this year under a policy approved by the Wilkes Board of Education. As a result:

Forty-five seniors graduated at the Wilkes Early College High School on May 21. There were 58 last year, making this the first year the total hasn’t increased. The first class graduated in 2016.

Early College High School counselor Lisa Lentz said, “The graduating class of 2019 has demonstrated high academic standards, strong character, a closeness with each other and also the WECHS Staff. Each student has a promising future whether entering a 4-year university, career, military or missionary work. This class will be greatly missed.”

Early College High School Principal Michelle Shepherd said, “In all my years of teaching and being an administrator, I have never experienced such a loving, close-knit and accepting group as the class of 2019. Not only for one another but also for the WECHS faculty and staff. This group will go far in life because of their drive and determination. I look forward to seeing the impact they have on the world.”

There are 119 seniors graduating at East Wilkes High in ceremonies starting at 8 tonight at the high school’s Ebb Tharpe Field in Ronda. East had 138 graduates in 2018.

East Wilkes school counselor Tosha Mathis stated, “The class of 2019 is amazing with many talents and abilities. It includes a student graduating with an associate degree from Wilkes Community College, along with many students receiving WCC certificates. There are three students graduating with an Accelerated Diploma. The graduates in this class are remarkably talented academically, athletically and artistically. Many have received accolades for their accomplishments. I know these outstanding young men and women are well prepared for whatever their next step is in life. Congratulations class of 2019.”

Dr. Chad Mann, East Wilkes principal, stated, “I am extremely proud of the East Wilkes High School class of 2019. These young men and women have exemplified what it means to be hard workers. These students are amazingly talented in athletics, academics and the arts. There is no doubt that each of these young people are prepared to be successful in life. To the class of 2019, good luck and blessings to you all.”

There are 179 West Wilkes High seniors graduating in ceremonies starting at 6 tonight in the West Wilkes gym in Millers Creek, making this one of the school’s largest graduating classes in several years. West had 159 graduates in 2018.

Among the West Wilkes graduates, 46 plan to attend a four-year university or college, 96 plan to attend a community college or another two-year program, seven plan to enter the military and 30 are going into the workforce.

West Wilkes school counselor Stephanie Stone said, “I am so proud of this graduating class for the things they have accomplished. They are bright, hardworking, and kind. I’m excited to see what the future holds for these talented young men and women. I wish the class of 2019 all the best.”

West Wilkes Principal Amanda Pruitt said, “The class of 2019 has definitely left their mark of hard work and dedication at West Wilkes High School. This is evident by the number of scholarships awarded, the number of students preparing to serve in our country’s armed forces and those entering the workforce. I am excited to see how all of these graduates continue their success beyond our high school walls. It has been an honor to watch these students grow as individuals for the last four years and I am confident that as they move forward, success will accompany them.”

There are 221 seniors graduating at Wilkes Central High in ceremonies starting at 8 tonight at the school’s Wes Steele Stadium in Moravian Falls, making this one of the largest graduating classes there in several years. Wilkes Central had 215 graduates in 2018.

Among the Wilkes Central graduates, 61 plan to attend a four-year university or college, 121 plan to attend a community college or other two-year program, three plan to join the military and 12 are entering the workforce.

Dr. Dion Stocks, Wilkes Central principal, stated, “I have had the privilege of watching the class of 2019 turn into terrific young adults during the past four years.  It is a class that has many talents both academically, athletically and artistically. As individuals, the staff of Wilkes Central is confident that they will be difference makers and have a tremendous impact on their communities as they leave ‘The Nest.’ We are lucky to have been a part of their journey and wish each of them the best of luck.”

This year’s senior class at North Wilkes High School has 126 graduates, down from an unusually large class of 182 in 2018.

North Wilkes school counselor Glenn Miller Jr. stated, “This year’s class is a much smaller class than we typically have, but they have a positive, productive attitude and have served as excellent examples for the underclassmen. They will be going in various directions, but I have no doubt they will do well in their future endeavors.”

Principal David Johnson said, “It has been amazing working with the class of 2019. A bright future is ahead for these graduates. I look forward to talking with them in the years to come and hearing about the wonderful accomplishments they have achieved. I wish the class of 2019 all the best.”

A few clouds from time to time. Low 57F. Winds light and variable.