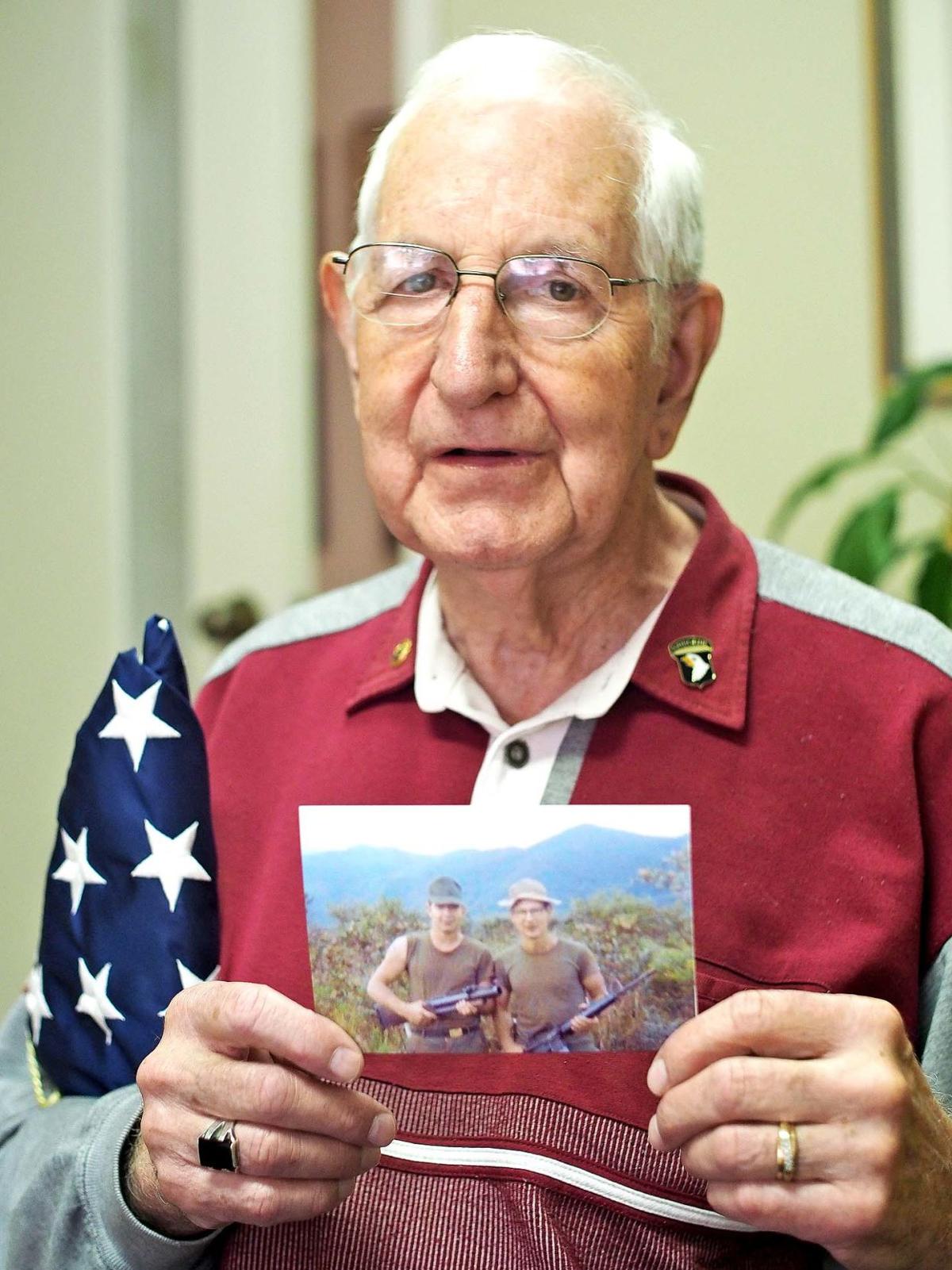 TRAVIS TAYLOR of North Wilkesboro holds a photo of his younger brother, Rodney Taylor, who is on the left holding a grenade launcher in Vietnam. On Taylor’s right shoulder is the tri-fold flag presented to him in July during a graveside ceremony honoring the memory of Rodney Taylor, who was 22 when he died in Vietnam. 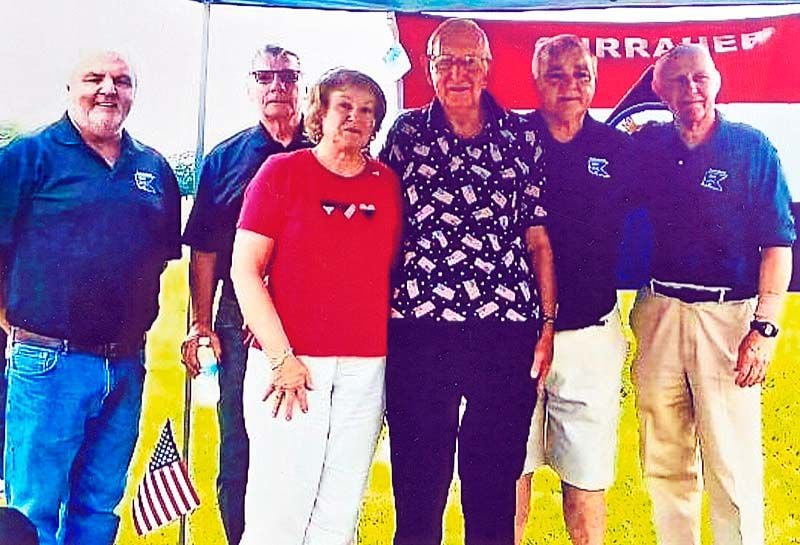 TRAVIS TAYLOR of North Wilkesboro holds a photo of his younger brother, Rodney Taylor, who is on the left holding a grenade launcher in Vietnam. On Taylor’s right shoulder is the tri-fold flag presented to him in July during a graveside ceremony honoring the memory of Rodney Taylor, who was 22 when he died in Vietnam.

Rodney Eugene Taylor of McGrady was 22 when he died in 1970 on a combat mission during the Vietnam conflict, just 10 days before the end of his tour of duty.

His family was informed of his death a day after he died on Sept. 4, 1970, but it would be almost 50 years before they learned the true story of what really happened on the night of Sept. 3, 1970, in the Thua Thien Hue province of South Vietnam.

Closure for the family was a long time coming, but it finally arrived on July 15 at Mountlawn Memorial Park in North Wilkesboro, the cemetery where Taylor is buried.

It took a great niece’s heartfelt plea, five years of frantic searching by his band of brothers, and an emotional return trip to Vietnam for the pieces of Rodney Taylor’s wartime puzzle to finally fall into place.

Rodney Taylor was only 13 years old when his father, Spencer Freeman Taylor, died 10 days before Christmas in 1961. With his father gone, Rodney was taken under the wing of his brother Travis, who was six years his senior.

“I just did (for Rodney) what Dad did for me, because (Dad) wasn’t around anymore,” said Travis during an interview Wednesday. “I didn’t want to be the head of the household, but I had to. Me and Rodney hunted some, and fished some, and I taught him how to keep his gun clean and in shape.”

Travis Taylor got his draft notice shortly after graduating from Wilkes Central High School in 1962. Soon after he broke his arm in a car accident and figured he wouldn’t need to show up for the draft, but he was told by the local draft board, “If your (draft) card says be here at 0600 Monday, you’d better be here.”

Taking that advice seriously, he showed up with his arm in a cast but was promptly told, “We don’t take cripples. We want real men.” He was handed a deferment that stood for four years, until he joined the Air Force on Sept. 15, 1966.

Travis was an aircraft mechanic for two years in the Air Force, working on B-52s and F-15s. When he returned to McGrady in 1968 he worked as a diesel mechanic for Lowe’s Companies, a job that lasted 19 years.

He served as a sniper expert with Bravo Company, part of the 1st Battalion and 506th Infantry Regiment, members of which were known as the “Currahee Brothers.” The larger 101st Airborne Division was known as the “Screaming Eagles.”

On the night of Sept. 3, 1970, leading his patrol through the flatlands outside of Camp Evans, Taylor was shot in the chest by another U.S. sniper team, who mistook him as the enemy. Taylor survived the night as medical personnel fought to save his life, but he succumbed to his wound the next day.

Travis Taylor says he’ll never forget the following day, when two Army officers came to his mother Mattie Lee Taylor’s trailer in McGrady with news that Rodney had been killed in Vietnam.

“They just said he was on sniper duty and was shot by friendly fire. We later learned the whole story from the man who spent the last 11 months of Rodney’s life with him, fighting side by side.”

That man, Hank Bow, settled in Tennessee after the war, but he could never quite shake the “survivor’s guilt” and belief that he should have died on patrol that night, not Rodney.

“He took a bullet for me,” Bow later told the family. He felt that way because, at the time of Taylor’s death, Taylor was training snipers, a job handed down to him from Bow, and was taking “point” with the patrol instead of Bow.

For his ultimate sacrifice, Taylor was posthumously awarded the Purple Heart, the Combat Infantryman’s Badge, the Bronze Star Medal for Meritorious Service, the Army Commendation Medal for Courageous Action in Vietnam, the Army Air Medal, the Vietnam Service Medal, the Republic of Vietnam Campaign Service Medal and the National Defense Service Medal.

‘Never got to meet my hero’

“Hey, Uncle. You don’t know who I am, I don’t guess; I never got to meet you because I didn’t even exist yet. I’m your great-niece Valerie, daughter of Melissa Taylor [Bartelson]. It’s really late to be posting this now, at the age of 13 years old, but I figured I would since it’s Veterans Day today. I can’t wait to meet you when I come home one day... I heard about how awesome you are and stuff; how you died in Vietnam while loyally fighting for your country. I just wanted to give you a final salute... Thank you so much for your service. I love you, Rodney, and I’ll meet you someday.”

The post, titled “Never got to meet my hero,” was read by Bow, who pledged then and there to find his old friend’s family. It was a long, often frustrating process that took about five years.

Before finding Taylor’s family in North Wilkesboro, five of Taylor’s squad mates made the trip back to Vietnam in 2017. They visited the exact site where Taylor was shot, along what was then called “Convoy Road.” They also gathered soil and pebbles near what used to be Camp Evans and brought it back to the States.

The breakthrough in finding Taylor’s family came in April of 2018, when the surviving members of Taylor’s platoon assembled in Gatlinburg, Tenn., at the Mountain Man Memorial March, one of the largest Gold Star Family events on the East Coast. A Gold Star Family is the immediate family of fallen U.S. service members.

Marlene and Dave Van Matre, who work for Gold Star Family, helped Bow track Taylor’s family to North Wilkesboro. Then arrangements were made for Bow, Mike Smith, Pete Falco and Danny McNair to travel to Mountlawn and commemorate the life and service of Taylor.

During the tear-filled ceremony at Mountlawn, the friends and family of Rodney Taylor toasted the fallen soldier, then poured the remainder of the bourbon from the engraved flask onto Taylor’s footstone. The soldiers also presented Travis with a 101st Airborne pin, a tri-fold U.S. flag, and the soil and pebbles they brought back from Vietnam.

Travis Taylor said that Falco told him that his brother’s death “was a true waste of a great soldier and an even greater person.” Still, Taylor said this summer’s ceremony at Mountlawn was the closure he needed, and a reminder of his younger brother’s positive impact on his squad mates.

Travis noted that Rodney, who was one of 19 Wilkes servicemen killed in Vietnam, “was a really likable person, just like our dad. It was sad and I was heartbroken when he was killed, but it was exciting to see him honored (in July)” with the final salute at Mountlawn.

Rain showers in the morning will evolve into a more steady rain in the afternoon. High 52F. Winds light and variable. Chance of rain 100%. Rainfall near a quarter of an inch.

Cloudy with occasional rain...mainly in the evening. Low 41F. Winds light and variable. Chance of rain 90%.

A few clouds. Low around 50F. Winds light and variable.