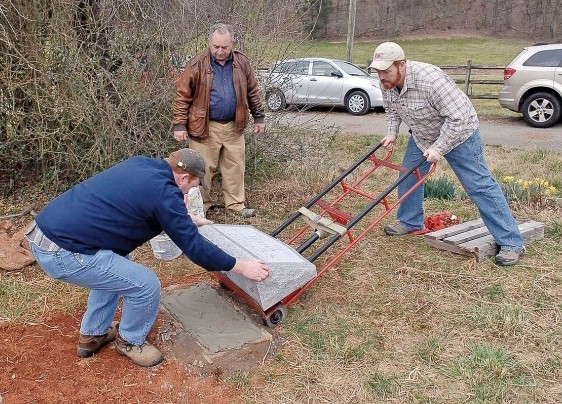 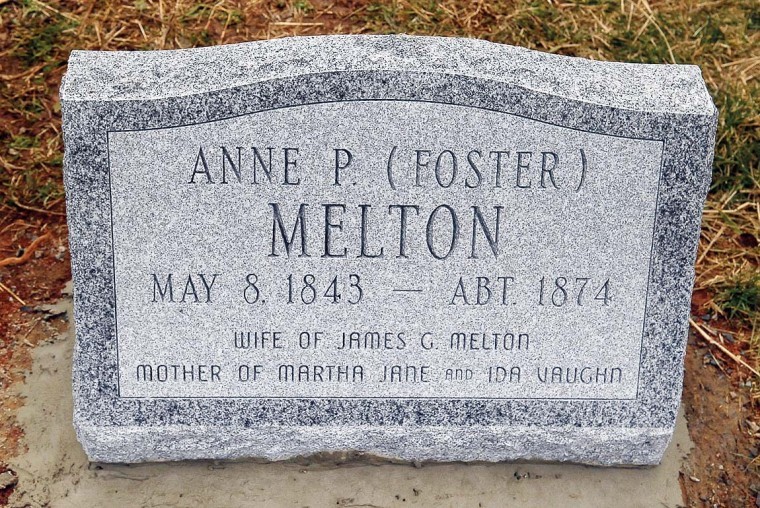 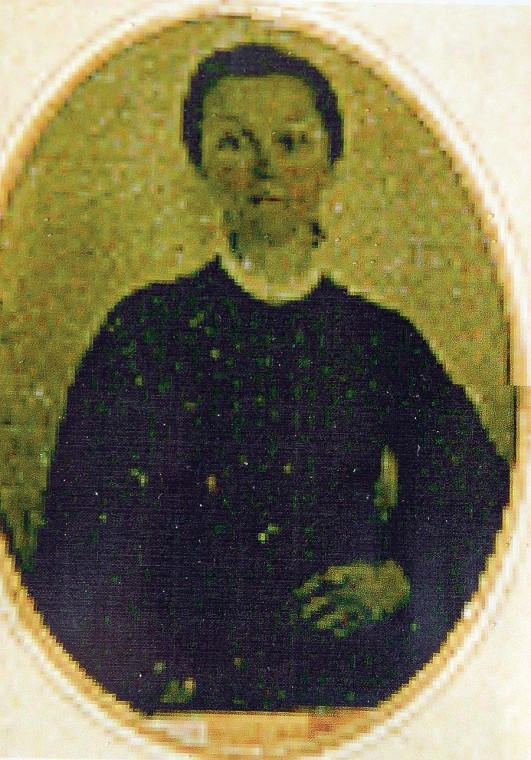 The photo of Anne Melton was taken a few years after she was acquitted of an accessory charge in the murder of Laura Foster. The original is still in the hands of her descendants.

The photo of Anne Melton was taken a few years after she was acquitted of an accessory charge in the murder of Laura Foster. The original is still in the hands of her descendants.

Tom Dula was hanged in 1868 for murdering Laura Foster, but the woman who was charged and found not guilty of being an accomplice in the death hasn’t faired much better in the court of popular opinion.

Anne Melton is still believed by some to be the actual murderer in the famous Wilkes County love triangle. Even award winning author Sharon McCrumb’s, “The Ballad of Tom Dooley,” published last year, concludes that Anne killed Laura out of jealousy.

Terry Melton of Lenoir, a great-grandson of Anne’s brother-in-law, Frances A. Melton, recalled how older family members at Melton family reunions at Mariah’s Chapel United Methodist Church in Grandin didn’t like to talk about Anne.

“We knew she was promiscuous and hot-headed,” said Melton, adding that enough time has passed now so that younger descendants don’t mind talking about her.

Wednesday afternoon, Melton and other descendants gathered for the placement of an inscribed gravestone for Anne where she is buried on a hill above Reedy Branch and the western end of Gladys Fork Road in Ferguson.

A small nondescript rock was replaced by a granite stone inscribed with “Anne P. (Foster) Melton.” The stone lists her birth date as May 8, 1843, says she died “Abt. 1874.”

It identified her as the wife of James G. Melton and said she was the mother of “Martha Jane” and “Ida Vaughn,” referring to Martha Jane Allen and Ida Vaughn Winkler.

Fletcher, a retired research scientist at the National Institute of Health, explained that Laura and Tom have inscribed gravestones and so Anne needed one also.

He has been conducting research for a book on the Laura Foster murder for about 10 years and plans to publish it soon. The title is, “The True Legend of Tom Dula: Debunking the Myths, Relating the Facts and Correcting the Myths, 1866-1870.”

Fletcher said not a lot is known about Anne after she was found not guilty in the Laura Foster murder case, except that she and James Melton continued living on Reedy Branch. She was the daughter of Carlotta Foster and Francis Triplett.

He said it’s known that she was shunned in the community because of her connection to Laura’s murder, but flaunted the fact that she lived well with her husband’s income as a cobbler, wagon maker and carpenter.

“I don’t want to glorify or excuse her behavior, but as far as I can tell, she (Anne) was loyal to both” Tom Dula and James Melton, said Fletcher, referring to the relationships she had with both.

“I am convinced that she helped plan the murder and helped Tom carry it out,” but didn’t actually commit the murder, he said.

Although it’s known that she had syphilis, the most common story about her death is that it resulted from a horse-drawn cart accident. According to some accounts, she suffered from injuries received in this accident for several days before her death.

James Melton married a second time and moved to Watauga County, where he is buried.

Anne’s descendants identified what they believe are about 20 gravesites in the Melton cemetery, which is below the former Turner Marley home.

Fletcher said he and his brother, Bob Fletcher of Lenoir, had a description of the location of the Melton family cemetery and where Anne was buried there from their great-uncles, Grady Allen and Hill Allen. The location was confirmed by Edith Marie Carter of Ferguson, whose Whippoorwill Academy in Ferguson includes the “Tom Dooley Museum” and tells the story of Laura Foster’s murder.

Tony and Ted Foster of Pennsylvania, direct descendants of Anne’s brother, Pinkney Andrew Foster, are in the gravestone business. They supplied and delivered the stone placed on Anne’s grave Wednesday.

The Foster brothers and Fletcher brothers are cousins through Pinkney Foster and became acquainted through genealogical research on the Internet. All four visited several places in the Ferguson area that connected to their family this week.

Tom’s gravestone, off Tom Dula Road in Ferguson, has been stolen and recovered a few times and chipped away by souvenir hunters. Motorists on N.C. 268 in Caldwell County, near the Wilkes line, can see Laura’s gravestone. Both graves are near the Yadkin River.

Anne’s grave is about a half mile northwest of where Laura’s body was found in a shallow grave on what now is called Laura Foster Ridge and about the same distance southwest of the Bates Place, an abandoned blacksmith shop where Laura Foster was supposed to meet Tom Dula before she was stabbed to death in May 1866.

Reedy Branch flows through a narrow valley between Anne’s grave on the west and Laura’s Ridge and the site of the Bate’s Place on the east. Anne and her husband, James Melton, lived farther upstream on Reedy Branch and Dula lived farther downstream.

The graveled Bill Horton Road, a little over a mile long, now goes along the east side of Reedy Branch between N.C. 268 West and Gladys Fork Road.

Great article -- Anne Melton was my great-great grandmother, and she has about a hundred descendents from Indiana to California, all from a granddaughter who moved to the Midwest from Lenoir, who would be interested in these developments. Thank you, cousins from the Fosters and Fletchers, who have taken the time and effort to remember Anne Melton in this way and also seek the truth behind this very complicated part of our shared family history. If any Melton descendents would like to reconnect with more relatives, please let me know. Sincerest regards, Ryan Minor

I just lost a lengthy post. Hi Ryan. I'm the black sheep it appears. I'm Anne's gg grand daughter. Dad never talked of No. Carolina. At all. Dad died in 1977 (George Clyde Allen). I'm 57. Mom died in 1995 but did tell me that I was her gg grand daughter. Mom only knew the story from the song. A FB friend gave me a link to the story and eventually I found John. I read his book and knew it was Anne. John unfriended me after I asked about mental illness, surely in my siblings (1 left and he is still trying to get rid of me. I'm fighting for my life here in Belfast Maine after exposing first hand epic corruption from Belfast to the State- Attorney General put 2 hits out on me and it's proven but law enforcement is bad. I am certain of a rape ring.) I can't get anyone to interview me. Just interview and save my stinking life already. No problem putting me out as a terrorist Mom, never arrested in my life, never lie, always standing to say no. You can't do that. Until done. I'm almost there. One way or another. Under self house arrest for weeks now, shackled since 3/1/18, brutal restrictions and tracking. Cops bust in when ever. 3 fabricated arrests, charges and evidence. Proven, but Judiciary runs the court. Refusing to let me be heard since first court appearance on 12/7/17. Gorilla Warfare since. Understating. Not guerilla. Big thugs- cops to neighbor to community to State. Mob mentality especially the hypocrite activists and sites. I keep trying. What a story. My whole life, I always thought I was adopted. I was like them. Guess I didn't get that or those gene's. Seems like most of government has them. Borderline Personality Disorder. Raging like OJ not low like Marilyn Monroe. Anyway to get my story out to media would save me. Hope someone reads this and interviews me. Please. www,boycottbelfast.blogspot.com laurieallen55@msn.com Belfast, Me. 04915 Here's me Dad and Mahttp://boycottbelfast.blogspot.com/p/my-dad-was-a.html From: JOHN E. FLETCHER
Sent: Tuesday, May 7, 2013 2:32 PM
To: laurieallen55@msn.com
Subject: Ann Melton Descendants

Dear Laurie,
You are my cousin by way of Clyde Allen's older sister Bettie Allen, who was my grandmother. If you have pictures (postcards) of Ann and Laura, I would be very interested in seeing them.
I have done the genealogy of our family and I would be glad to exchange information with you.
Please contact me at RomeJohn@comcast.net or write to me John E. Fletcher, 513 Page Street, Berryville, VA 22611

Partly cloudy skies. A stray shower or thunderstorm is possible. Low near 50F. Winds W at 5 to 10 mph.

Partly cloudy skies. A stray shower or thunderstorm is possible. Low near 50F. Winds W at 5 to 10 mph.

Partly cloudy skies during the evening will give way to cloudy skies overnight. Low 46F. Winds light and variable.

Mostly cloudy in the evening then periods of showers after midnight. Low 46F. Winds light and variable. Chance of rain 30%.

Views of campaign donors cause concern

Candidate replies to comments on donations

Library should remain in regional system