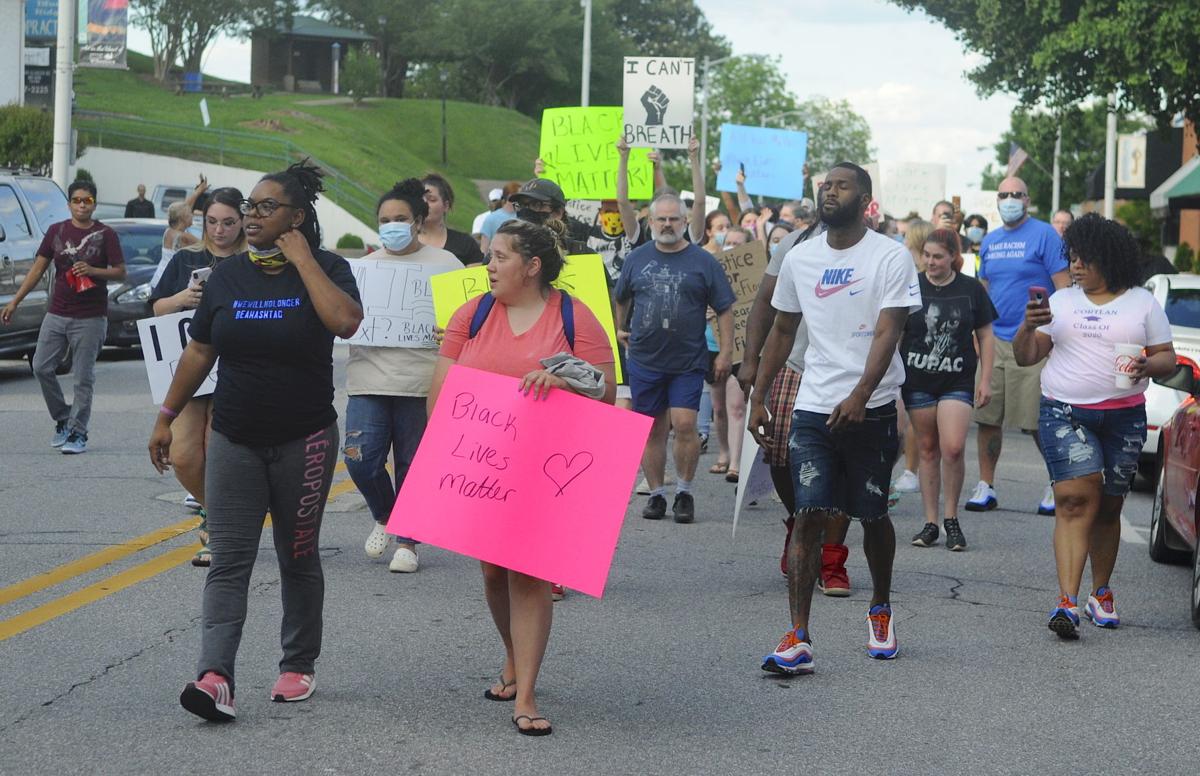 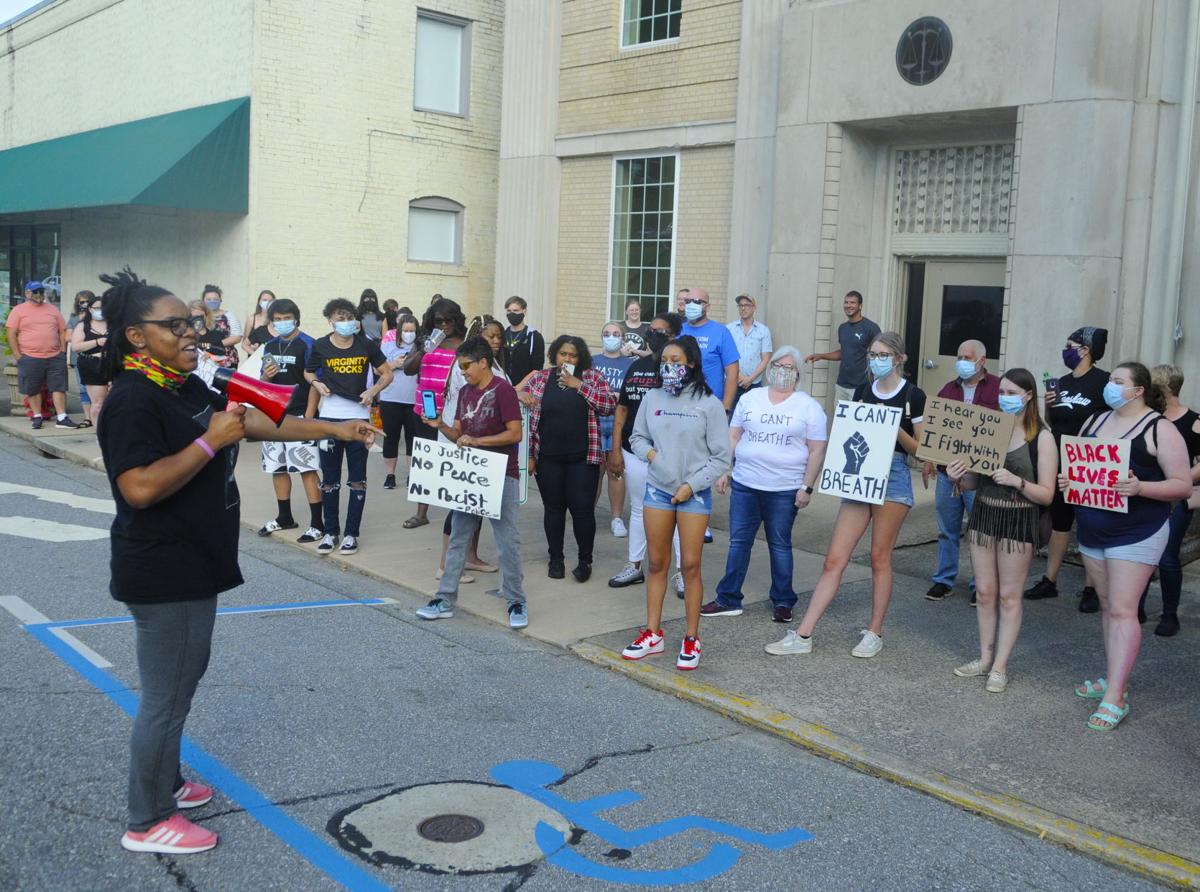 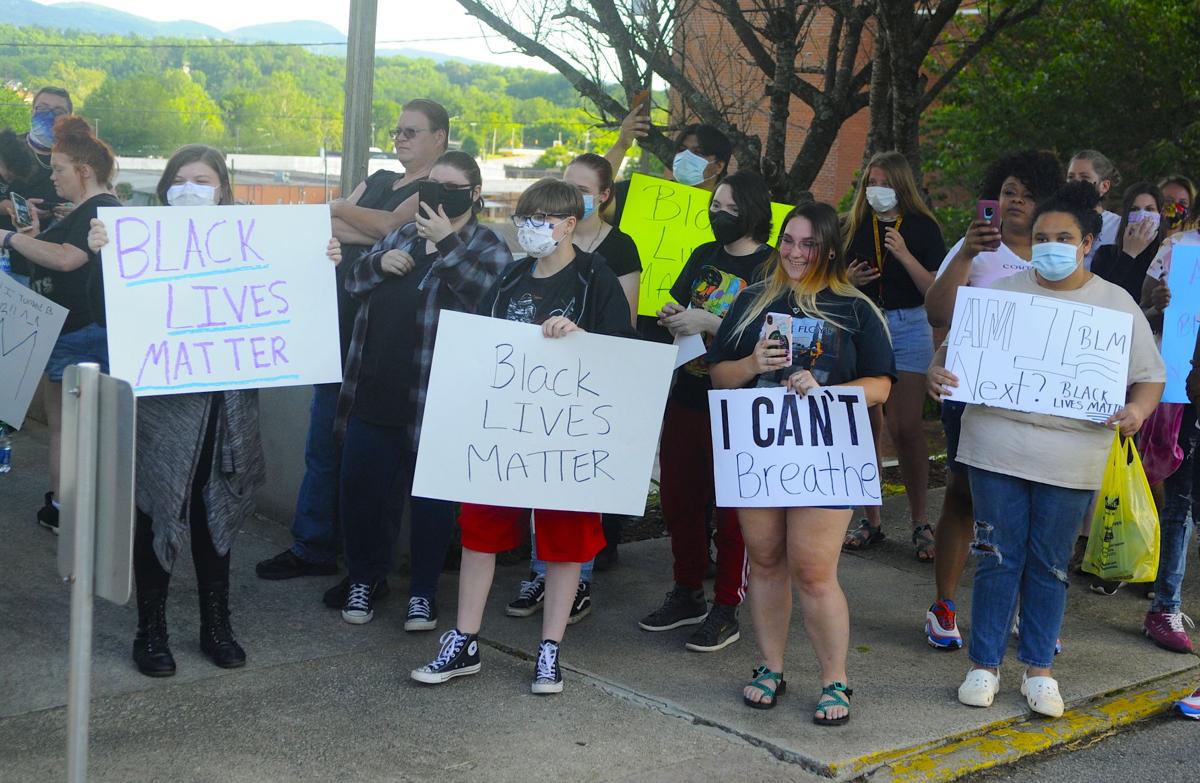 PROTEST MARCHERS, many wearing masks due to the COVID-13 pandemic, have signs ready. 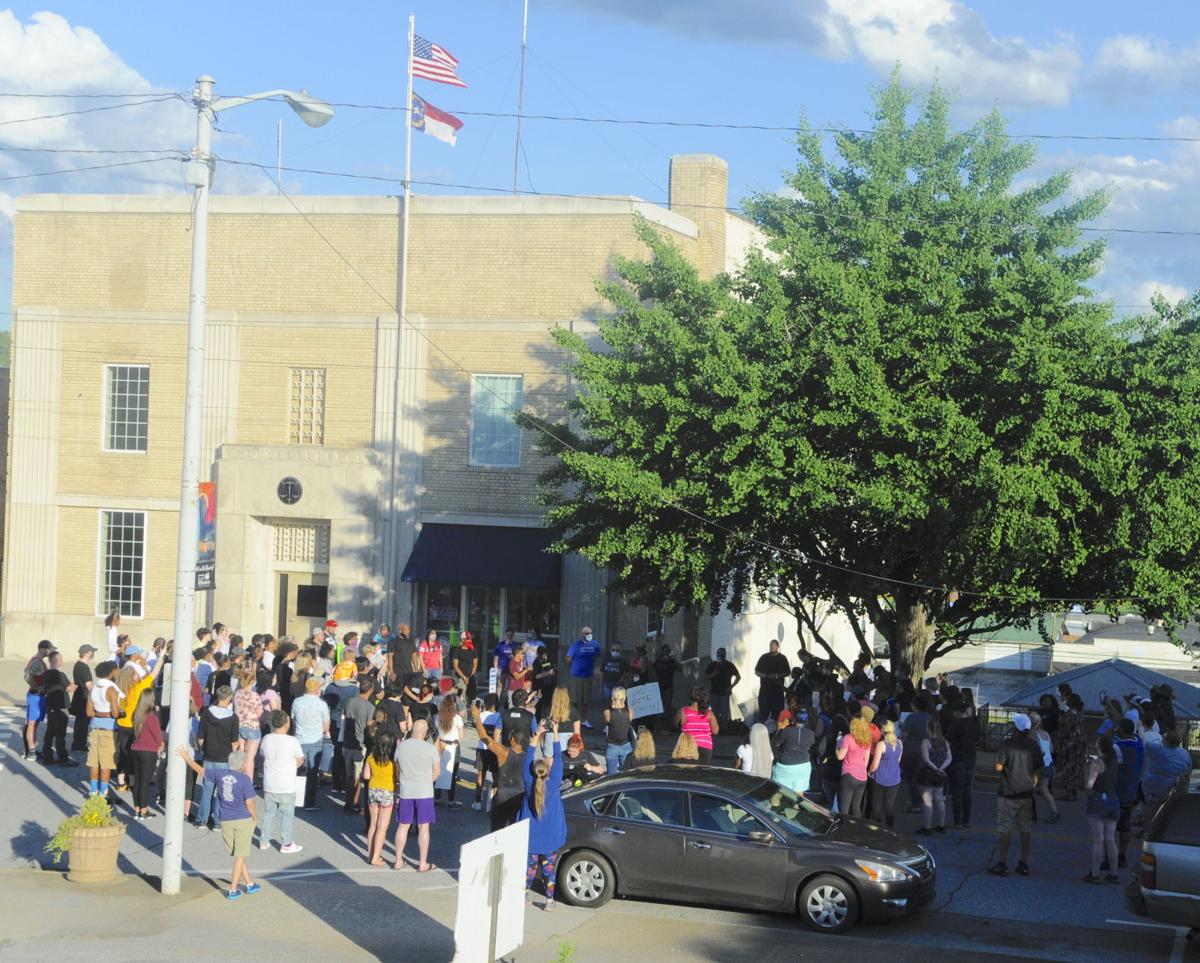 THE TWO-MILE-LONG protest march started and ended in front of the North Wilkesboro Police Station on Main Street.

PROTEST MARCHERS, many wearing masks due to the COVID-13 pandemic, have signs ready.

THE TWO-MILE-LONG protest march started and ended in front of the North Wilkesboro Police Station on Main Street.

About 200 people marched down Main Street and elsewhere in North Wilkesboro Sunday evening to protest the death of George Floyd while in police custody in Minneapolis, Minn., and similar deaths of black men in recent years.

It was part of a wave of protest events held across the nation since Floyd’s May 25 death, but unlike some others, it included no property damage.

Jamella Garrett of North Wilkesboro, who organized the protest march, said it was peaceful except for when a vehicle appeared to try to hit several marchers as they walked across the Central Business District Loop.

Garrett said the marchers jumped out of the way in time to avoid injury. They included her husband, Vidal Garrett. She said it was captured on video, including the vehicle’s license plate, and would be reported. She said the incident occurred near where the western end of Main Street intersects with the CBD Loop, just after a North Wilkesboro police car had pulled out.

North Wilkesboro Police Chief Joe Rankin said Tuesday that he was aware of something like this being mentioned to a North Wilkesboro officer, but that it wasn’t formally reported to the department.

Rankin said no permit was obtained for the protest march and he learned around noon Sunday that it was going to occur. Rankin said he decided that the best thing to do at that point was to allow the protest march to proceed and have several officers out at intersections to help maintain safety.

Garrett said North Wilkesboro police officers did a good job blocking traffic at intersections as the marchers passed and by assisting in other ways.

The event was announced as a peaceful march on Facebook Saturday evening and Garrett said she was surprised by the crowd size with such short notice. Garrett said there are plans for another event this month.

The march, about two miles long, began and ended with participants gathering in front of the North Wilkesboro Police Station. It concluded with prayer.

Floyd, like Eric Garner in New York City in 2014, pleaded with police and said “I can’t breathe” before they died. A police officer had a knee on Floyd’s neck and Garner was subdued with a choke hold.

Garrett said comments on Facebook discouraged having the local march for fear of it leading to property damage and other violence as shown in TV news coverage of gatherings protesting Floyd’s treatment.

“We don’t have to go out and burn somebody’s building, slap the next person or disrespect anyone to get our point across, but just doing this we already made a statement and took a stand by coming together for something that should have been happening a long time ago,” she said.

Although the protest march was directed primarily at events outside of Wilkes, Garrett said every black family in the county can share stories of racism they experienced. She said a cousin of hers had a bad experience with North Wilkesboro police officers several years ago. “I don’t think they complained, but even if they did, what would have happened,” she added.

“If we take the time to understand each other, that can help eliminate a lot of the problems we have today. Racism isn’t just ‘Oh I hate you.’ It’s generational. We pass it down to our children because of lack of understanding and lack of compassion. If we can find one nice thing to say about anybody, we can eliminate a lot of those problems,” said Vidal Garrett.

He said he was proud of his wife for organizing the event.

Josh McUmber, a white resident of Wilkes in his mid-20s, said he attended the protest rally because of the violence against minorities nationwide for several years without improvement.

“Just after George Floyd was killed, a black man was shot in his car in Arizona. It seems to me based on how I read the story that they tried to cover that one up too. The reason it didn’t blow up was that there was no video coverage, unlike George Floyd,” said McUmber.

He mentioned the Garner case in New York. Police officers approached Garner thinking he was selling single cigarettes without tax stamps. When Garner wouldn’t cooperate, police kept a choke hold on him until he died.

“If you are going to treat some of the people like this, treat me that way too. It’s my personal stance because I’m tired of seeing this violence.” He added that he came to be peaceful and said he opposed looting.

McUmber said it was important to him to attend the event to show his support and “demonstrate that people here do care.”

Wilkes resident Jonathan Owens said he attended “because as a white person I have privilege and I’m tired of seeing other white people sit idly by while there is racial injustice and people of color are being murdered.”

Owens added, “If I have privilege, I am going to try and use it the best I can.”

A 37-year-old black woman who lives in Wilkes said she was proud to see the crowd at the event, which started and ended on the same street as the theater (Liberty) that her mother and other blacks in that generation couldn’t patronize unless they sat in the balcony.

“It makes me proud but it still doesn’t solve the problem. But, the more people are heard, hopefully one day our citizens will stop being killed.”

She said conditions are better now for black people in Wilkes, but still it’s not unusual for her to go shopping locally and have her cart checked to make sure her receipt covers everything after 10 white people leave without being checked.

“Or I can walk by someone with their pocketbook and they’ll clutch it tight…. I feel segregated in that sense.”

She said videos of incidents like George Floyd in police custody reinforce the belief that young black men are a threat. She said it increases the likelihood of her sons being perceived as a threat if seen walking down the road. “I could lose a child.”

She said people need to intervene instead of filming video.

“I have a problem with somebody just watching someone kill someone. If I was being hurt by a cop, I hope and pray someone would intervene.”

So glad I spent the last 3 months locked up in my house so I could see pictures of these people walking around like this in the middle of a county wide outbreak.

Some sun in the morning with increasing clouds during the afternoon. A stray afternoon thunderstorm is possible. High around 90F. Winds light and variable.

Thunderstorms in the evening, then variable clouds overnight with still a chance of showers. Low 68F. Winds light and variable. Chance of rain 80%.