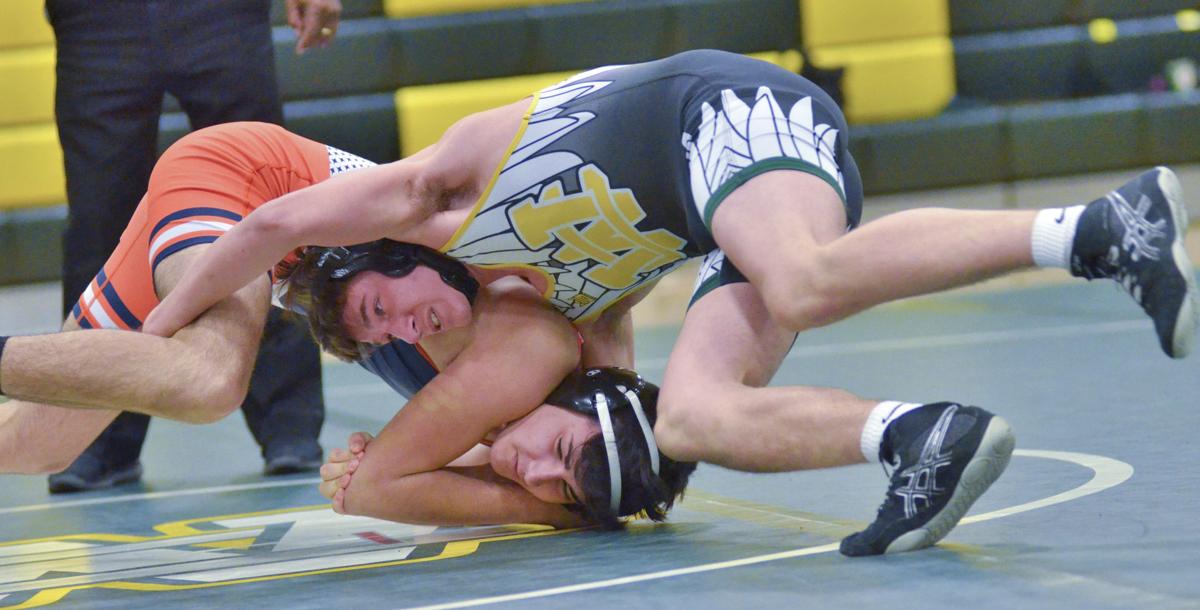 WILKES CENTRAL’S Russell Ames drives Starmount’s Joshua Drane, in an attempt to score a takedown, during the 145-bout of the Eagles’ 48-33 win on Friday night in Moravian Falls. 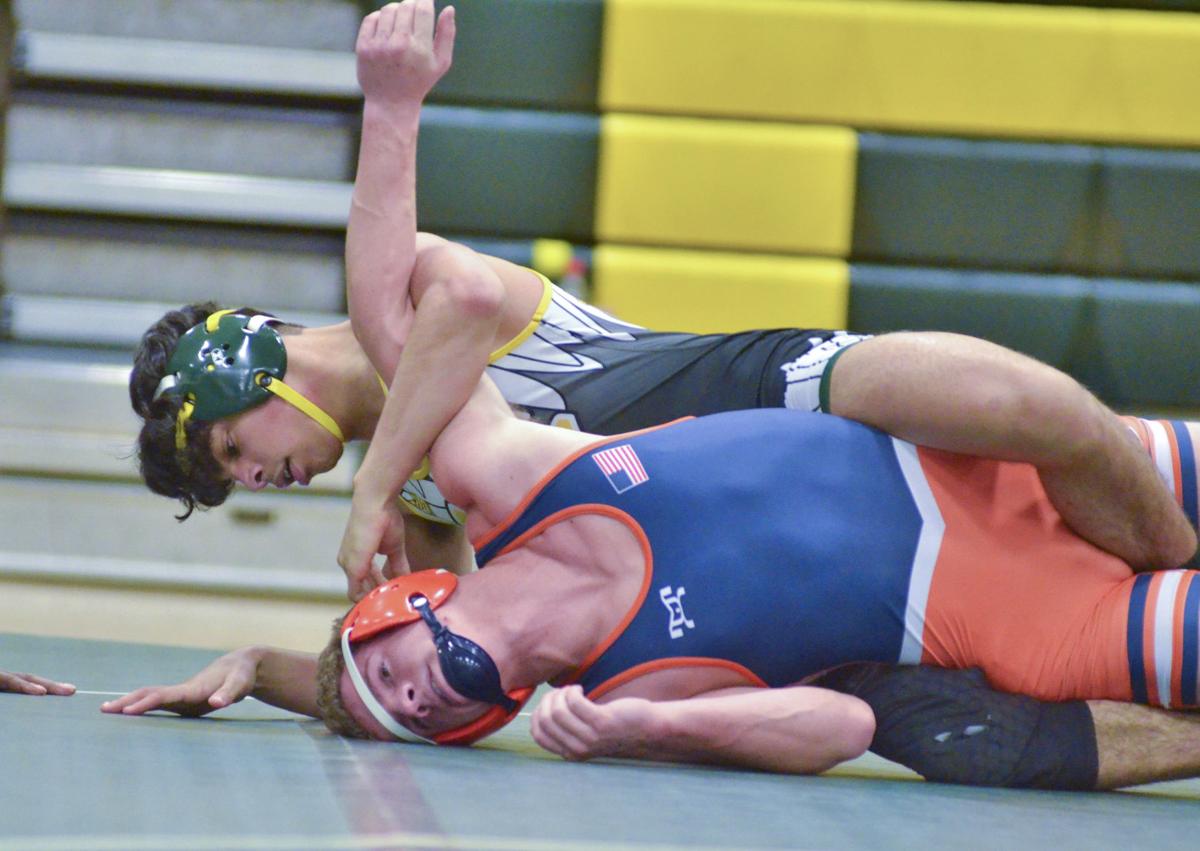 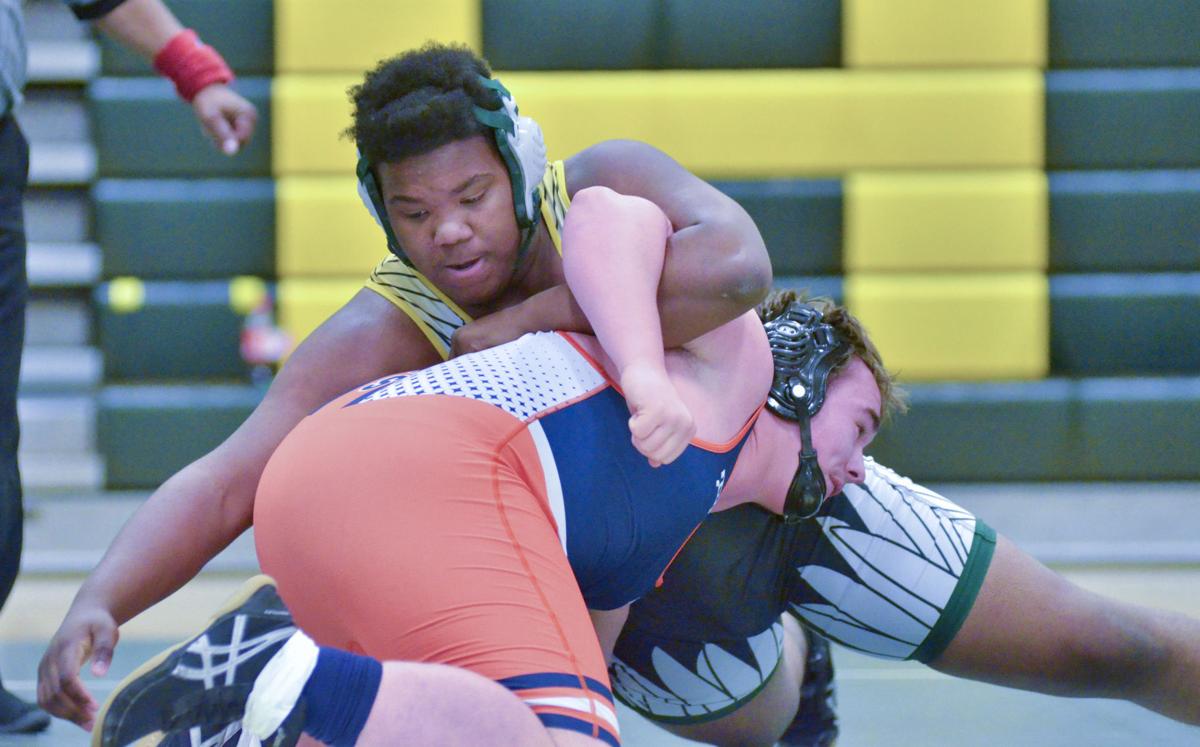 WILKES CENTRAL’S Russell Ames drives Starmount’s Joshua Drane, in an attempt to score a takedown, during the 145-bout of the Eagles’ 48-33 win on Friday night in Moravian Falls.

Wilkes Central was able to weather the storm early, and late, in its home opener against Starmount on Friday night in Moravian Falls.

And thanks to a strong showing from their middle weight classes, the Eagles defeated Starmount 48-33 in their Mountain Valley Athletic Conference wrestling opener.

The contested bouts were even at six apiece for both teams ,but it was the Rams (0-2 in MVAC action) who controlled the lower and upper weight classes for the most part.

But according to Wilkes Central Head Coach Mike McCann, the middle weight classes belonged to the Eagles.

“The kids wrestled hard and the middle weight classes are the meat of our lineup and they know I expect a lot out of them and they’re all upperclassmen,” said McCann. “Trent’s (Hunt) a senior and Tradin’s (Allen) a senior; Jordan’s (Jarvis) a junior and Nick Hartley’s a senior and they did well tonight.”

Starmount built up a 15-6 advantage after the first four bouts following Cole Nixon’s pin of Zach Cox at 126 pounds.

The Rams took three of the first four bouts with lone exception being Tyler Holland’s match with Mikey Ramos at 106 pounds.

Holland built a 4-0 lead after the first period, and led 7-0 but Ramos got on the board in the second period. The sophomore then scored a takedown, and ultimately, the pin with 18 seconds left in the period.

The Eagles won the next six bouts. First, Corben Call and Hunt earned forfeit wins at 132 and 138 pounds, respectively, to take the lead.

Ames and Jarvis earned second period pins while Allen and Hartley pinned their opponents in the first period.

After the match, McCann applauded Jarvis for his win against Sterlin Holbrook (an All-MVAC selection last winter) but also singled out Logan Bowlin’s match with Starmount’s Austin Jones at 113 pounds, which Jones won 10-8.

“We had some big matches,” said McCann. “The decision at 113 and the pin at 152 against Sterlin Holbrook were big matches because if we had given up six there at 113 and had gotten three or a pin (at 152), it could’ve been a lot different.”

But Jahad Martin added on one more win for good measure with a second-period pin on Caden Abernathy at 285 pounds for the Eagles, who return to the mat on Friday at Elkin.