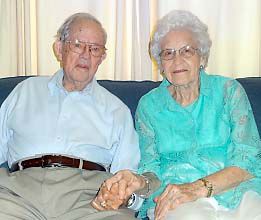 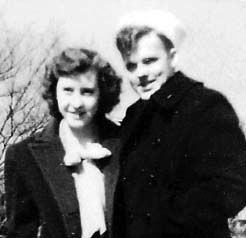 Joe D. Elledge 94, and Betty Dancy Elledge, 91 of Sparta Road, North Wilkesboro celebrated their 72nd wedding anniversary on May 21, 2019, at their home with family and friends dropping by to visit. They were married on May 21, 1947, at Maple Grove Baptist Church in Hays, by the Rev. Glenn Huffman.

Mr. Elledge was ordained as a deacon Sept. 23, 1962, and has served at Fairplains Baptist Church, Peace Haven Baptist Church and Journey of Grace Baptist Church. He has served as Sunday School teacher, sang in the choir, and as church clerk.  Mr. Elledge served in the United States Navy for three years during World War II. He was a salesperson at several clothing stores in North Wilkesboro and retired from Spainhour’s department store and later from Empire Jeep, Chrysler, Dodge.

Mrs. Elledge was also Sunday School teacher, nursery worker, a choir member and worked with the youth groups. She was employed at Wilkes Hatchery and later retired from Holly Farms Hatchery.

They are charter members of Journey of Grace Baptist Church and attend when they are able.