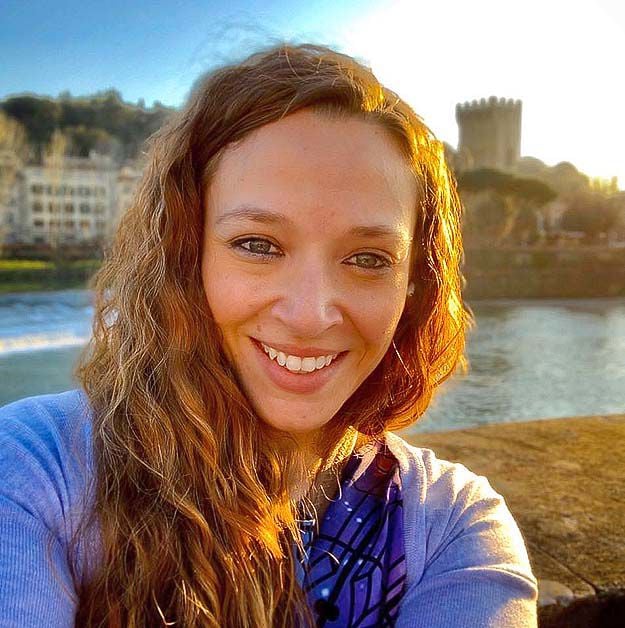 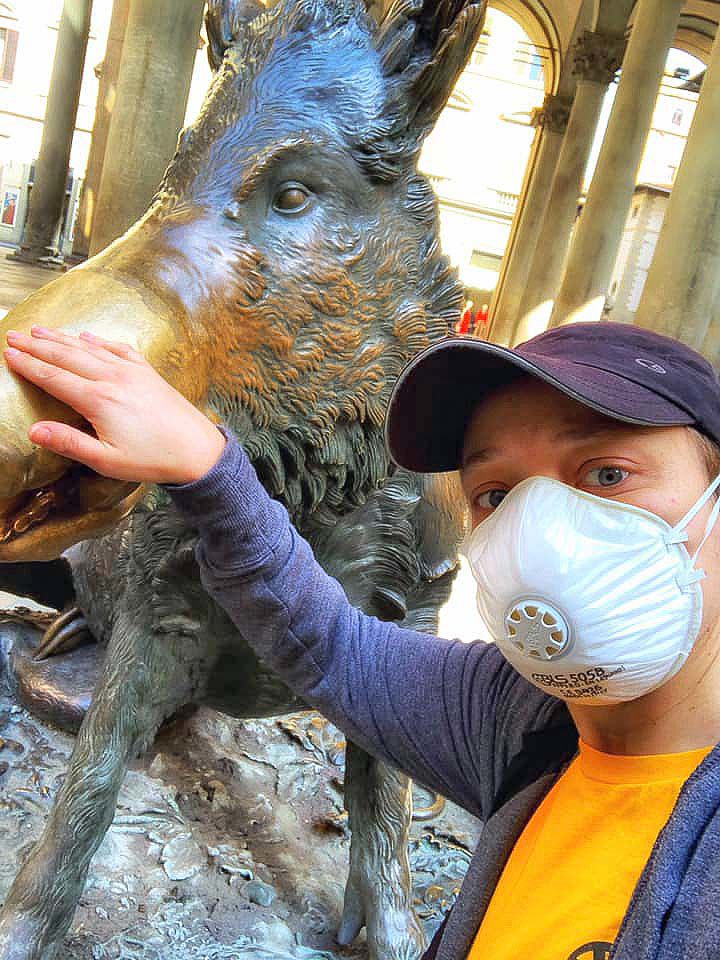 Aimee Call, wearing her N95 mask, pats “Il Porcellino,” a bronze statue of a wild boar in the Piazza Mercato Nuovo in Florence, Italy, just before returning to the United States. Legend has it that patting the statue ensures the return to Florence someday.

Aimee Call, wearing her N95 mask, pats “Il Porcellino,” a bronze statue of a wild boar in the Piazza Mercato Nuovo in Florence, Italy, just before returning to the United States. Legend has it that patting the statue ensures the return to Florence someday.

A Wilkes County native who spent the last six months living in Florence, Italy, working as dean of students at Instituto Lorenzo de’ Medicii called coming back to the United States on Saturday “shocking.”

Aimee Call said she wondered where everyone’s masks were.

Call said in a FaceTime interview Monday that residents of Florence and the rest of Italy have been on “lockdown” or “shelter in place” for several weeks. Citizens were confined to their homes except for going to the market once a week (one person per family) and taking pets out.

When she did go out, Call wore an N95 mask and gloves and by law traveled with a “self-certification” document that indicated she didn’t have COVID-19, hadn’t been in contact with anyone with the virus and the reason she was out of her apartment. Violating the order could result in a fine or even prison time.

In Florence, Call said, people live in close proximity to each other, mainly in apartments, and shop daily. Several generations live under one roof and there is a lot of walking around to places and noise from motor scooters and cars. When the lockdown started, “it was so quiet, the silence was a new type of noise,” she said.

When towns in northern Italy were quarantined starting Feb. 23, Call’s university had 1,382 students between its three campuses in Rome, Tuscania and Florence, most of them Americans studying abroad for one semester. As restrictions increased, it became Call’s job as dean of students to get all the 1,382 students out of Italy and back to their home countries.

Call said her biggest job was keeping everyone calm and answering students’ questions. Students from about 100 different universities had to get enrolled in distance learning so their semester could be completed.

Last Thursday, the State Department sent out a message saying citizens living abroad should make arrangements to return to the U.S. immediately or be prepared to remain abroad for an indefinite period of time.

Although flights to U.S. have been cut back to one a day in Italy, from Rome only, Call was able to book a flight back and arrived at JFK International Airport on Saturday with her dog, Rosie. Immediately upon arriving at JFK, Call had to submit documents stating she had no symptoms, but was traveling from a country with the coronavirus. Her temperature was taken and she was issued a special card.

She is now in quarantine in Cary for 14 days, taking her temperature twice a day. Call said she is surviving due to the generosity of friends dropping off food outside for her. One friend moved out of her house to let her stay there.

Her parents, Victor and Lynn Call of North Wilkesboro, have been frantic with worry. She’s able to FaceTime and talk with them, however.

Call wants North Carolinians to take the coronavirus seriously. Doctors in Italy have called the virus “an invisible enemy,” she said, and have compared the situation there to wartime, where doctors must choose who to treat.

“I am concerned. People (in the U.S) are living as if nothing has changed. America is where Italy was three weeks ago.” She wants to help Americans better understand the virus and help them make better decisions about keeping themselves and others safe.