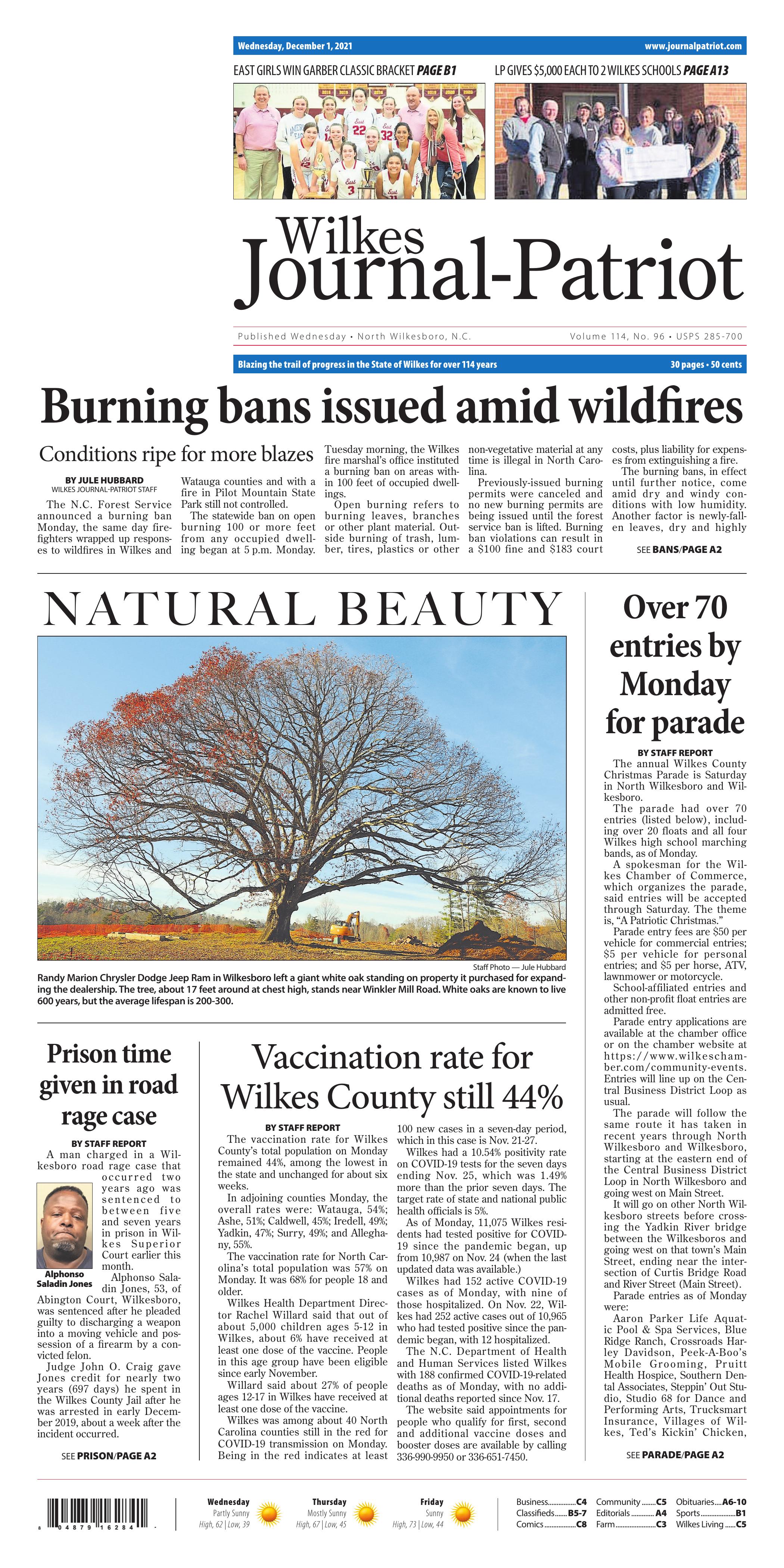 A storage building at left was destroyed by fire and mobile home in the background was damaged by heat from the fire. The structure fire caused a wildfire that burned about seven acres Sunday. The scene is on Brewer Mill Road.

Greg Gant, left, is using a fire torch to control fire with fire while Tyler Woodard, right, is on his way with a chainsaw to cut down a dead that was on fire. Both are members of the N.C. Forest Service Fire Attack Support Team in Wilkes.

The N.C. Forest Service announced a burning ban Monday, the same day firefighters wrapped up responses to wildfires in Wilkes and Watauga counties and with a fire in Pilot Mountain State Park still not controlled.

The statewide ban on open burning 100 or more feet from any occupied dwelling began at 5 p.m. Monday. Tuesday morning, the Wilkes fire marshal’s office instituted a burning ban on areas within 100 feet of occupied dwellings.

Open burning refers to burning leaves, branches or other plant material. Outside burning of trash, lumber, tires, plastics or other non-vegetative material at any time is illegal in North Carolina.

Previously-issued burning permits were canceled and no new burning permits are being issued until the forest service ban is lifted. Burning ban violations can result in a $100 fine and $183 court costs, plus liability for expenses from extinguishing a fire.

The burning bans, in effect until further notice, come amid dry and windy conditions with low humidity. Another factor is newly-fallen leaves, dry and highly flammable due to lack of precipitation.

No significant rainfall is indicated in the 10-day National Weather Service forecast. The rain gauge at W. Kerr Scott Dam collected only .36 of an inch of rain in November. Most of Wilkes is “abnormally dry” (least severe drought condition), according to the N.C. Drought Monitor website.

The forest service and fire departments were dispatched to a wildfire off Brewer Mill Road in Traphill about 6 a.m. Sunday and another just across the Wilkes line in Watauga about noon Sunday.

The Wilkes blaze burned about seven acres, damaged an occupied mobile home and destroyed two storage buildings. The other fire, off Elk Creek Road, scorched about 40 acres of steep mountain timberland before it was fully contained.

Firefighters were in the mop-up stage on both fires by mid-morning Monday.

The wildfire in Traphill, on the south side of Brewer Mill Road, resulted from a cinderblock storage building catching fire due to an electrical short, said Jeremiah Greene, assistant county ranger in Wilkes with the forest service.

Embers from the storage building fire “were carried by wind and started fires in five different spots, with the farthest about 400 yards away,” said Greene.

He said firefighters had difficulty reaching the wildfire due to thick underbrush, so a containment line was built around it with a forest service bulldozer operated by Cory Wilmoth. Timber on the land was harvested less than 10 years ago.

Firefighters remained on the scene overnight and spent much of the time there Monday looking for and extinguishing hotspots that could cause another wildfire. Greene said a forest service pilot in a spotter plane flew over the site early Monday afternoon and couldn’t find anything still burning.

The Ferguson Fire Department was dispatched to a report of a brush fire on Kendal Town Road, which is off Elk Creek-Darby Road in southwestern Wilkes, about 7 p.m. Monday. Firefighters were on the scene nearly an hour.

The wildfire in Watauga was on the south side of Elk Creek Road in the Triplett community, said Andrew Harsey, county ranger with the forest service in Watauga. Harsey said Monday that an investigation to determine the cause is underway, but he noted that it started near Elk Creek Road.

He said part of the containment line on the wildfire was a small tributary of Elk Creek that also defines the Wilkes-Watauga county line at that point.

Harsey said the fire was in the Stewart Simmons Fire District on what is known as Seven-Mile Ridge. The burned area included acreage in the Blue Ridge Mountain Club (former Laurelmor) residential development.

Harsey said firefighters had to contend with extremely steep terrain, with heavy rhododendron and mountain laurel growth. One structure was threatened initially, but wasn’t damaged.

Helicopters dropped water on the fire and spotter planes were utilized to determine where to focus efforts. A forest service bulldozer was used to build containment lines on the ridge.

Firefighters were on the scene overnight and spent much of Monday extinguishing hot spots.

A forest service spokesman estimated Monday that it was a 500-acre fire, all within the state park.

The spokesman said firefighter crews are building containment lines at the base of the mountain and letting the fire burn downhill, while securing structures. 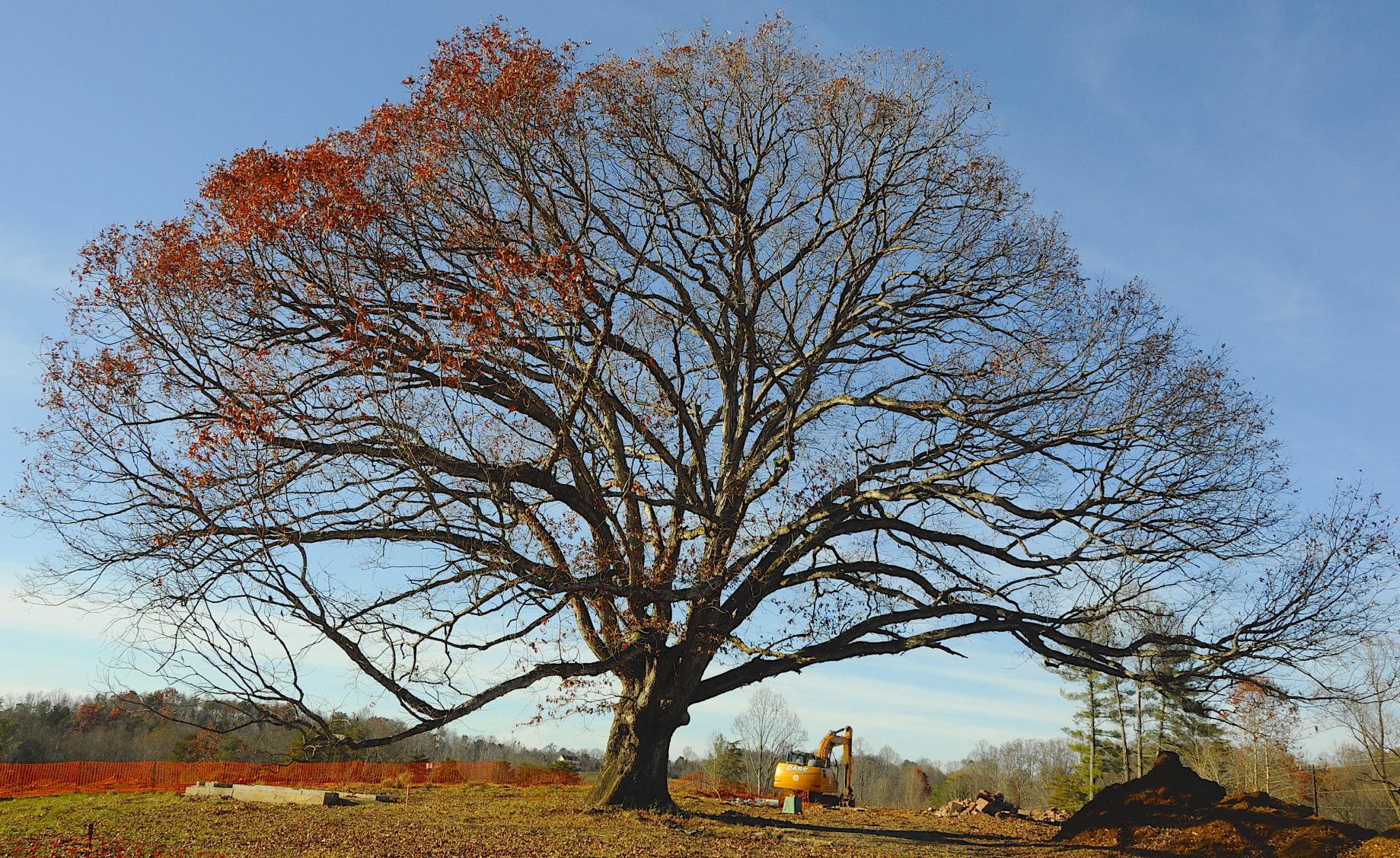 Randy Marion Chrysler Dodge Jeep Ram in Wilkesboro left a giant white oak standing on property it purchased for expanding the dealership. The tree, about 17 feet around at chest high, stands near Winkler Mill Road. White oaks are known to live 600 years, but the average lifespan is 200-300.

The vaccination rate for Wilkes County’s total population on Monday remained 44%, among the lowest in the state and unchanged for about six weeks.

The vaccination rate for North Carolina’s total population was 57% on Monday. It was 68% for people 18 and older.

Wilkes Health Department Director Rachel Willard said that out of about 5,000 children ages 5-12 in Wilkes, about 6% have received at least one dose of the vaccine. People in this age group have been eligible since early November.

Willard said about 27% of people ages 12-17 in Wilkes have received at least one dose of the vaccine.

Wilkes was among about 40 North Carolina counties still in the red for COVID-19 transmission on Monday. Being in the red indicates at least 100 new cases in a seven-day period, which in this case is Nov. 21-27.

Wilkes had a 10.54% positivity rate on COVID-19 tests for the seven days ending Nov. 25, which was 1.49% more than the prior seven days. The target rate of state and national public health officials is 5%.

Wilkes had 152 active COVID-19 cases as of Monday, with nine of those hospitalized. On Nov. 22, Wilkes had 252 active cases out of 10,965 who had tested positive since the pandemic began, with 12 hospitalized.

The N.C. Department of Health and Human Services listed Wilkes with 188 confirmed COVID-19-related deaths as of Monday, with no additional deaths reported since Nov. 17.

The website said appointments for people who qualify for first, second and additional vaccine doses and booster doses are available by calling 336-990-9950 or 336-651-7450.

News
Over 70 entries by Monday for parade

The annual Wilkes County Christmas Parade is Saturday in North Wilkesboro and Wilkesboro.

The parade had over 70 entries (listed below), including over 20 floats and all four Wilkes high school marching bands, as of Monday.

A spokesman for the Wilkes Chamber of Commerce, which organizes the parade, said entries will be accepted through Saturday. The theme is, “A Patriotic Christmas.”

School-affiliated entries and other non-profit float entries are admitted free.

Parade entry applications are available at the chamber office or on the chamber website at https://www.wilkeschamber.com/community-events. Entries will line up on the Central Business District Loop as usual.

It will go on other North Wilkesboro streets before crossing the Yadkin River bridge between the Wilkesboros and going west on that town’s Main Street, ending near the intersection of Curtis Bridge Road and River Street (Main Street).

Parade entries as of Monday were:

A man charged in a Wilkesboro road rage case that occurred two years ago was sentenced to between five and seven years in prison in Wilkes Superior Court earlier this month.

Alphonso Saladin Jones, 53, of Abington Court, Wilkesboro, was sentenced after he pleaded guilty to discharging a weapon into a moving vehicle and possession of a firearm by a convicted felon.

Judge John O. Craig gave Jones credit for nearly two years (697 days) he spent in the Wilkes County Jail after he was arrested in early December 2019, about a week after the incident occurred.

The Wilkes Sheriff’s Office also charged Jones with attempted murder and assault with a deadly weapon with intent to kill, but those charges were dismissed. Craig ordered that Jones have no contact with the victim.

Jones was charged with firing a gun into the vehicle driven by Gibson Carter Brondos of Wilkesboro about 7:30 p.m. Nov. 29. Brondos was 18 at the time.

One bullet grazed Brondos’ upper right back, but he wasn’t seriously injured.

“After an extensive investigation, detectives learned that the incident occurred from a road rage situation” in which Jones believed the Brondos vehicle was following too closely and using high beam headlights, said a Wilkes Sheriff’s Office spokesman.

“After the suspect vehicle stopped, the victim also stopped and asked if the suspect needed assistance. The suspect is believed to have then fired at least two shots at the victim’s vehicle.”

The spokesman said “good detective work and security video footage led to Jones being identified as a suspect and the charges against him.”