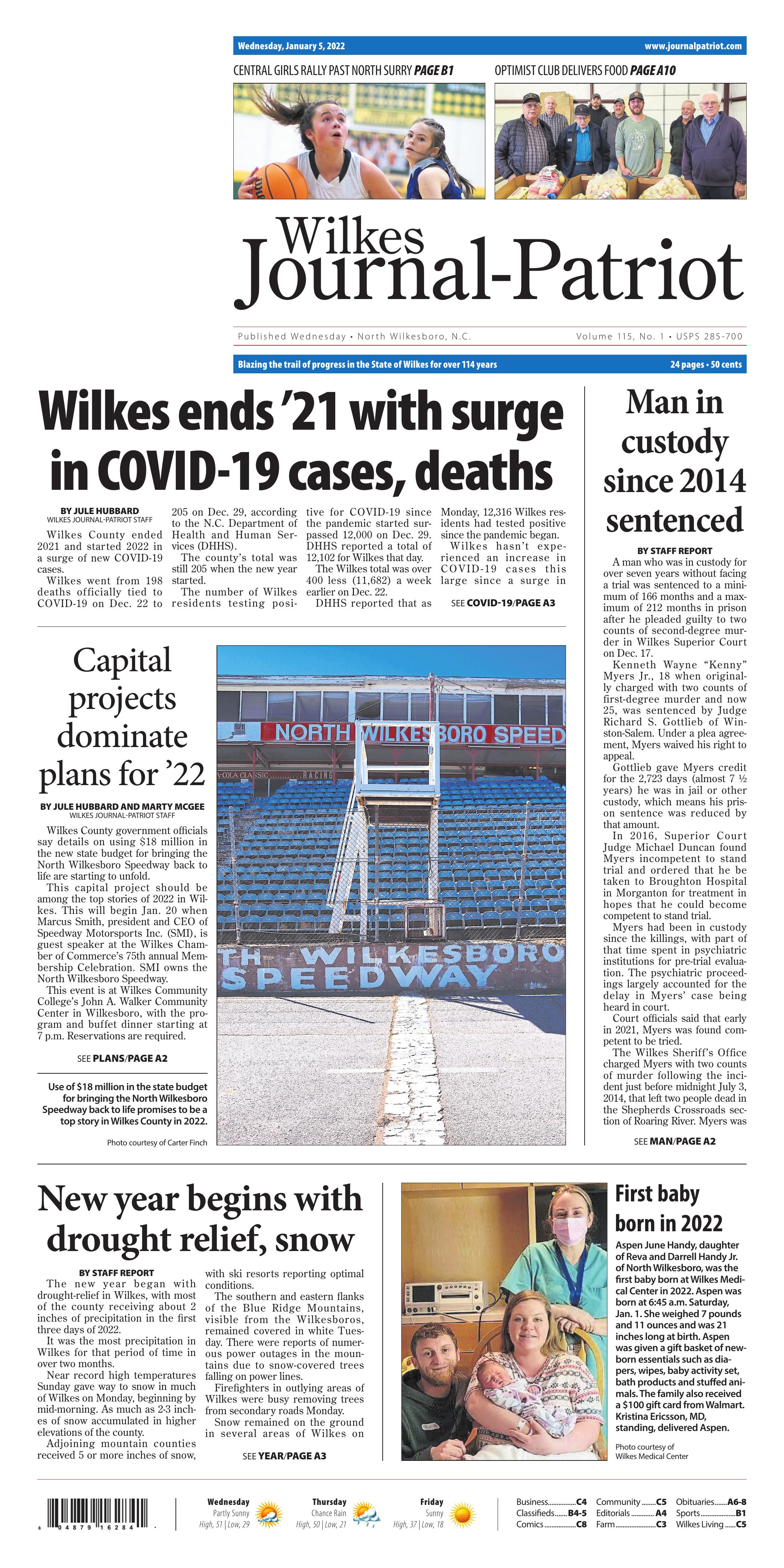 The county’s total was still 205 when the new year started.

The number of Wilkes residents testing positive for COVID-19 since the pandemic started surpassed 12,000 on Dec. 29. DHHS reported a total of 12,102 for Wilkes that day.

DHHS reported that as Monday, 12,316 Wilkes residents had tested positive since the pandemic began.

Wilkes hasn’t experienced an increase in COVID-19 cases this large since a surge in mid-September 2021, driven by the delta variant of COVID-19.

The latest surge is due partly to the increasing dominance of the highly-transmissible omicron variant.

Use of $18 million in the state budget for bringing the North Wilkesboro Speedway back to life promises to be a top story in Wilkes County in 2022.

Plans are in the works for again having races and other events at the historic North Wilkesboro Speedway east of the Wilkesboros.

Wilkes County government officials say details on using $18 million in the new state budget for bringing the North Wilkesboro Speedway back to life are starting to unfold.

This capital project should be among the top stories of 2022 in Wilkes. This will begin Jan. 20 when Marcus Smith, president and CEO of Speedway Motorsports Inc. (SMI), is guest speaker at the Wilkes Chamber of Commerce’s 75th annual Membership Celebration. SMI owns the North Wilkesboro Speedway.

This event is at Wilkes Community College’s John A. Walker Community Center in Wilkesboro, with the program and buffet dinner starting at 7 p.m. Reservations are required.

Smith said in November that the $18 million “provides the starting capital needed to rebuild the infrastructure” of the speedway. “With state budget amounts now finalized, we can zero in on project priorities and determine work schedules” for improvements to the North Wilkesboro Speedway. “The goal will be to modernize the property so that it can host racing and special events again in the future.”

The budget says the $18 million goes to Wilkes County government “to coordinate with other relevant local governments on water and sewer and related infrastructure projects for service” to the speedway.

County Manager John Yates said he learned in early December that county government will receive the $18 million through the N.C. Department of Commerce. Yates said that department will assign a grant manager to work with county officials on how the money can be spent. This includes meeting requirements of the federal American Rescue Plan (ARP), source of the funds.

Yates spoke to Terri Parsons of Purlear, a leader in efforts for the speedway through her NASCAR connections, and said she will help arrange for county government and SMI officials to meet.

Wilkes County Finance Director Chris Huffman said that following a remote meeting with officials from Gov. Roy Cooper’s office, he and other county government officials are working with SMI officials to produce a list of items SMI would like addressed with the $18 million.

“We’re in very, very preliminary stages of this…. It’s gaining some speed because we’re going to have to sign an agreement with the state on how we’ll use these funds,” said Huffman.

“We’re working with the speedway folks to see what all needs to be done there” and this will help determine what is funded with the $18 million, he said. County officials will then work with state officials to determine what is eligible for ARP funds, said Huffman, adding that state and local officials are still learning how the money can be used.

The speedway is almost 1.5 miles down Speedway Road from a North Wilkesboro sewer line on Speedway Road, near where it intersects with N.C. 115. The facility is about 2.75 miles down U.S. 421 from a Wilkesboro water line at the Northwest Visitors Center along U.S. 421.

Rep. Jeffrey Elmore of North Wilkesboro, who played a key role in securing funds for the speedway, said an SMI business plan includes using ARP money from the state on the facility. He said the company’s vision includes using all of its motorsports properties year-round for a variety of events. The North Wilkesboro Speedway last hosted a NASCAR Cup Series race on Sept. 29, 1996. It sat dormant for over a decade before being revived for short track touring division races in 2010 and 2011.

Wilkes County government officials will be involved in other capital projects in 2022. Building an emergency services center on county-owned land at the intersection of Call Street and Oakwoods Road in Wilkesboro is a high priority for the county commissioners. This includes a main Wilkes Emergency Medical Services base and a large open area under roof for drive-through vaccinations and other purposes.

On Sept. 7, the commissioners approved a preliminary design-build agreement with Jefferson-based Vannoy Construction calling for paying the company $485,000 to design the emergency services center, prepare documents for building it and figure its guaranteed maximum construction price. Ground could be broken for this 22,000-square-foot facility as soon as March or April.

The main EMS base now is in a building adjacent to Wilkes Medical Center in North Wilkesboro. Commissioners have indicated uncertainty about continued availability of this building, which the county subleases from the hospital.

The agreement approved Sept. 7 authorized hiring Vannoy as the county’s design-builder for the emergency services center, but commissioner approval is needed for Vannoy to start construction. It also gave commissioners the option of proceeding similarly with a proposed new county office building and a third county government facility not yet determined.

If undertaken, the new county office building likely would be constructed on three acres at the intersection of Courthouse Drive Extension and Executive Drive in Wilkesboro that the commissioners approved buying in late April. It adjoins the Wilkes Agricultural Center property.

Town and county governments, county schools and Wilkes Community College all have additional funds in 2022 for capital improvements, primarily related to COVID-19 relief programs. Speaking for county government, Elmore said potential capital projects have to weighed against rising construction costs. “I don’t want us to get in a position of having to raise taxes to build buildings.”

In March, the commissioners okayed a reimbursement resolution saying the county will spend a maximum of $30 million on three capital projects. This lets the county pay itself back with borrowed funds.

In November, they approved a grant project ordinance calling for spending $3.1 million of $13.3 million in ARP funds the county received on building the emergency services center. Huffman said county officials are awaiting confirmation that ARP funds can be used for this facility. He said they can be used for four purposes: public health, water service, sewer service and broadband.

The ordinance lists spending $7.98 million on extending sewer lines and building pump stations for providing the county landfill and county airport with municipal sewer service, plus connecting others along the way. It allocates $1.6 million of the $13.3 million on buying 10 public safety vehicles and two ambulances and for constructing a “burn building” for training firefighters.

Elmore said meeting labor force needs in county government should be even more of a challenge in 2022. This includes retaining longtime staff and recruiting new employees.

Other matters Elmore said will likely come before his board in 2022 include:

• distributing funds received through the nationwide settlement of lawsuits filed against prescription pain killer manufacturers and distributors. This money must go to non-profits that address drug addiction

A county-owned T-hangar will be under construction at the county airport in 2022. A commercial building, available for lease and funded by the county and the Golden LEAF Foundation, will also be built this year.

The new year began with drought-relief in Wilkes, with most of the county receiving about 2 inches of precipitation in the first three days of 2022.

It was the most precipitation in Wilkes for that period of time in over two months.

Near record high temperatures Sunday gave way to snow in much of Wilkes on Monday, beginning by mid-morning. As much as 2-3 inches of snow accumulated in higher elevations of the county.

The southern and eastern flanks of the Blue Ridge Mountains, visible from the Wilkesboros, remained covered in white Tuesday. There were reports of numerous power outages in the mountains due to snow-covered trees falling on power lines.

Snow remained on the ground in several areas of Wilkes on Tuesday, but roads were generally clear. The Wilkes County Schools operated on a two-hour delay Tuesday to allow for the possibility of icy conditions that morning. Schools were already closed Monday for a teacher work day.

Highs are supposed to be around 50 and lows in the 20s and 30s Wednesday and Thursday, but colder Friday in Wilkes. 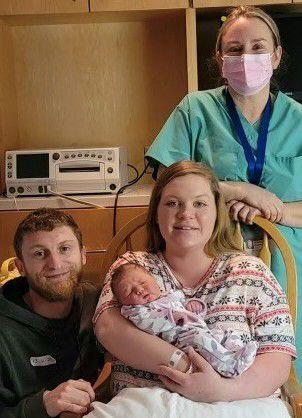 Aspen June Handy, daughter of Reva and Darrell Handy Jr. of North Wilkesboro, was the first baby born at Wilkes Medical Center in 2022. Aspen was born at 6:45 a.m. Saturday, Jan. 1. She weighed 7 pounds and 11 ounces and was 21 inches long at birth. Aspen was given a gift basket of newborn essentials such as diapers, wipes, baby activity set, bath products and stuffed animals. The family also received a $100 gift card from Walmart. Kristina Ericsson, MD, standing, delivered Aspen.

A man who was in custody for over seven years without facing a trial was sentenced to a minimum of 166 months and a maximum of 212 months in prison after he pleaded guilty to two counts of second-degree murder in Wilkes Superior Court on Dec. 17.

Kenneth Wayne “Kenny” Myers Jr., 18 when originally charged with two counts of first-degree murder and now 25, was sentenced by Judge Richard S. Gottlieb of Winston-Salem. Under a plea agreement, Myers waived his right to appeal.

Gottlieb gave Myers credit for the 2,723 days (almost 7 ½ years) he was in jail or other custody, which means his prison sentence was reduced by that amount.

Myers had been in custody since the killings, with part of that time spent in psychiatric institutions for pre-trial evaluation. The psychiatric proceedings largely accounted for the delay in Myers’ case being heard in court.

Court officials said that early in 2021, Myers was found competent to be tried.

The Wilkes Sheriff’s Office charged Myers with two counts of murder following the incident just before midnight July 3, 2014, that left two people dead in the Shepherds Crossroads section of Roaring River. Myers was charged in the shooting deaths of Richard Thomas Holloway and Amanda Victoria Transeau, 34 and 32 at the time respectively.

Deputies were dispatched to 229 Peace Valley Road and found Holloway and Myers with gunshot wounds and lying in the driveway of a mobile home after a disturbance with shots fired at that address was reported to the Wilkes Communications Center. Both died at the scene.

According to the sheriff’s office, the shooting incident occurred in the driveway as a result of a domestic situation that occurred at 229 Peace Valley Road.

Myers, Holloway and Transeau “had been hanging out together the afternoon before it (the fatal shootings) happened…. There was some sort of argument, but we don’t believe it was over drugs or money,” said Capt. Brandon Absher of the sheriff’s office. (Absher has since retired.) Investigators were told all three had been consuming alcohol. A long gun was recovered at the scene.