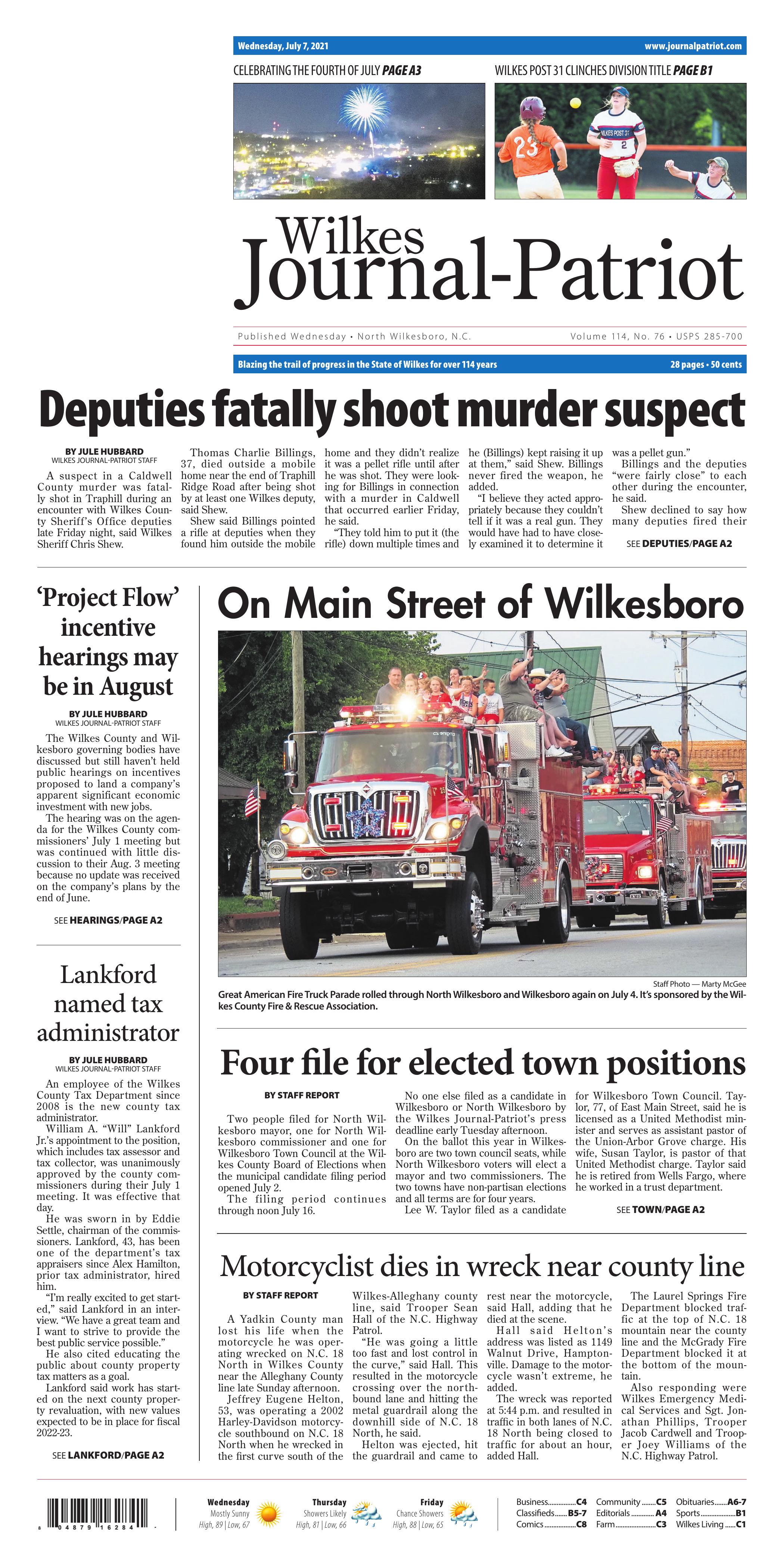 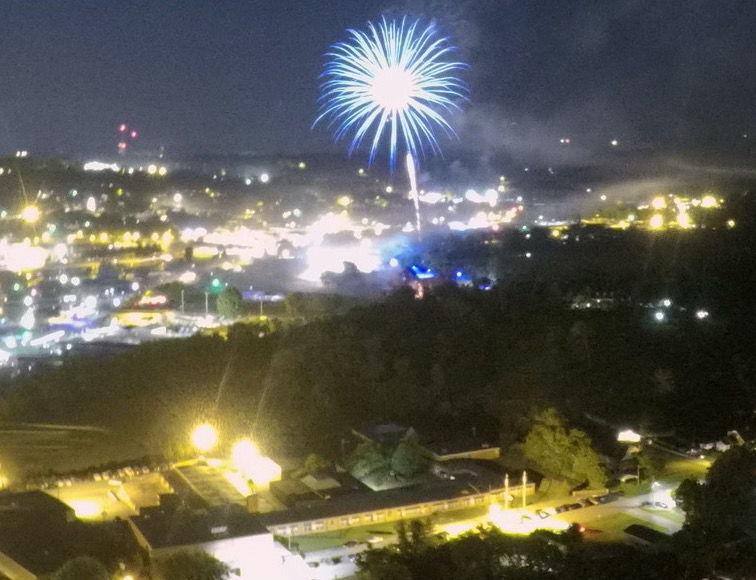 Celebrating the Fourth of July

The annual July 4 fireworks display returned to Memorial Park Sunday night. It was again sponsored by the Wilkes County Fire & Rescue Association, the Wilkes Journal-Patriot and the governments of Wilkesboro, North Wilkesboro and Wilkes County.

Thomas Charlie Billings, 37, died outside a mobile home near the end of Traphill Ridge Road after being shot by at least one Wilkes deputy, said Shew.

Shew said Billings pointed a rifle at deputies when they found him outside the mobile home and they didn’t realize it was a pellet rifle until after he was shot. They were looking for Billings in connection with a murder in Caldwell that occurred earlier Friday, he said.

“They told him to put it (the rifle) down multiple times and he (Billings) kept raising it up at them,” said Shew. Billings never fired the weapon, he added.

“I believe they acted appropriately because they couldn’t tell if it was a real gun. They would have had to have closely examined it to determine it was a pellet gun.”

Billings and the deputies “were fairly close” to each other during the encounter, he said.

Capt. Aaron Barlowe of the Caldwell Sheriff’s Office said Billings was being sought for the murder of Tracy Renee Rash, 31, of 2887 Sycamore Court, Granite Falls.

Barlowe said Rash was on the phone with a relative at the Sycamore Court address about 9 p.m. Friday when Billings attacked her and chased her down the street. The person Rash had been talking to on the phone called 911, and deputies arrived to find Rash dead at the side of the road with multiple knife wounds, Barlowe said.

He said Rash was Billings’ girlfriend and he had been living at her residence. “She had taken out a domestic violence (restraining) order on him (Billings) and we were trying to serve it Friday,” said Barlowe, adding that a man whom Caldwell deputies believe was Billings fled from them earlier that day.

Barlowe said Billings was believed to have taken Rash’s red Ford Focus and authorities in Wilkes were asked to be on the lookout for a vehicle matching that description, as well as Billings. He said the red Ford Focus was located in Traphill, but didn’t know the address.

Shew said Billings had lived on Traphill Ridge Road in the past but didn’t know if the mobile home near where deputies found him was his residence at the time of his death. 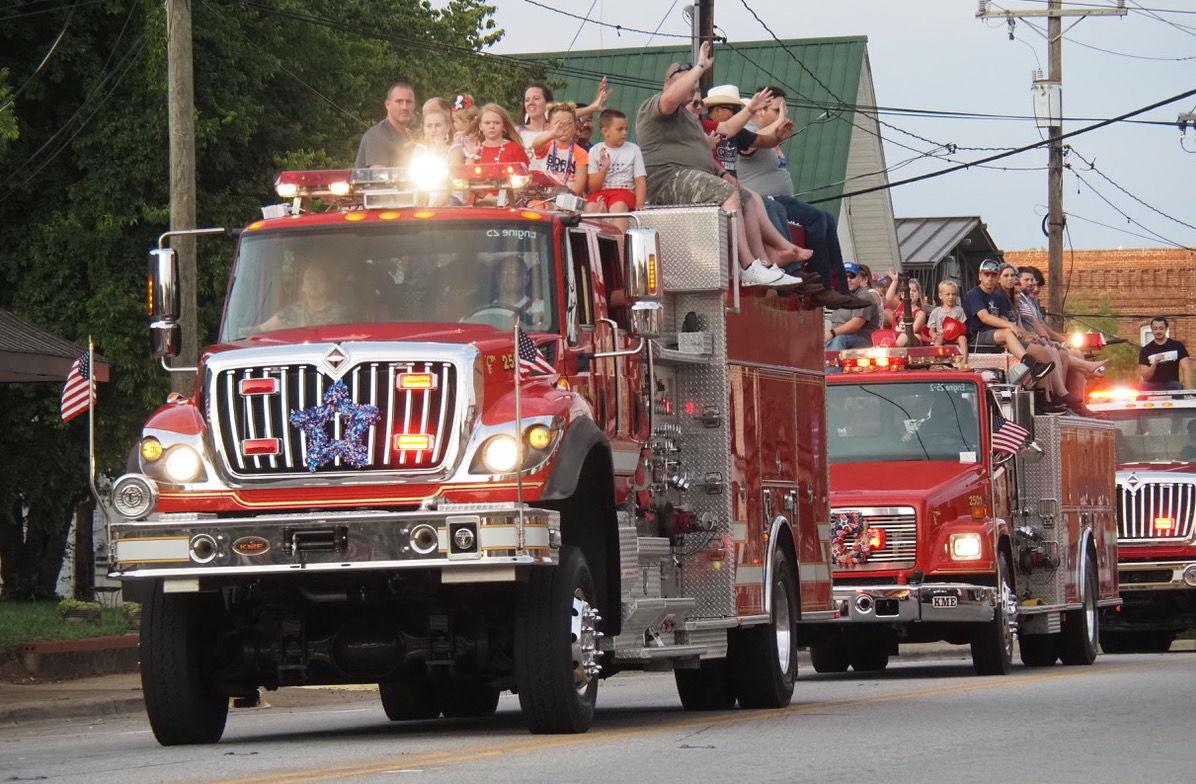 On Main Street of Wilkesboro

No one else filed as a candidate in Wilkesboro or North Wilkesboro by the Wilkes Journal-Patriot’s press deadline early Tuesday afternoon.

On the ballot this year in Wilkesboro are two town council seats, while North Wilkesboro voters will elect a mayor and two commissioners. The two towns have non-partisan elections and all terms are for four years.

Lee W. Taylor filed as a candidate for Wilkesboro Town Council. Taylor, 77, of East Main Street, said he is licensed as a United Methodist minister and serves as assistant pastor of the Union-Arbor Grove charge. His wife, Susan Taylor, is pastor of that United Methodist charge. Taylor said he is retired from Wells Fargo, where he worked in a trust department.

Wilkesboro Town Council seats now held by Nellie Archibald and Russ Ferree are on the ballot. Ferree, 70, and Archibald, 56, both said earlier that they would seek reelection. Ferree is an attorney and Archibald is retired advertising director for the Wilkes Journal-Patriot.

The North Wilkesboro commissioner seats held by Debbie Ferguson and Angela Day are on the ballot. Day said earlier than she would seek reelection, while Ferguson said she wouldn’t be a candidate. Day, 50, is a Realtor and owner of Ivy Ridge Traditions on Main Street, North Wilkesboro.

Michael Cooper, 35, and Marc. R. Hauser, 67, filed as candidates for North Wilkesboro mayor after announcing their candidacies earlier. Hauser, of F Street, was a national sales manager for Honeywell before he retired. Cooper, of Townsend Street, is regional government affairs director for the N.C. Association of Realtors.

A Yadkin County man lost his life when the motorcycle he was operating wrecked on N.C. 18 North in Wilkes County near the Alleghany County line late Sunday afternoon.

Jeffrey Eugene Helton, 53, was operating a 2002 Harley-Davidson motorcycle southbound on N.C. 18 North when he wrecked in the first curve south of the Wilkes-Alleghany county line, said Trooper Sean Hall of the N.C. Highway Patrol.

“He was going a little too fast and lost control in the curve,” said Hall. This resulted in the motorcycle crossing over the northbound lane and hitting the metal guardrail along the downhill side of N.C. 18 North, he said.

Helton was ejected, hit the guardrail and came to rest near the motorcycle, said Hall, adding that he died at the scene.

The wreck was reported at 5:44 p.m. and resulted in traffic in both lanes of N.C. 18 North being closed to traffic for about an hour, added Hall. 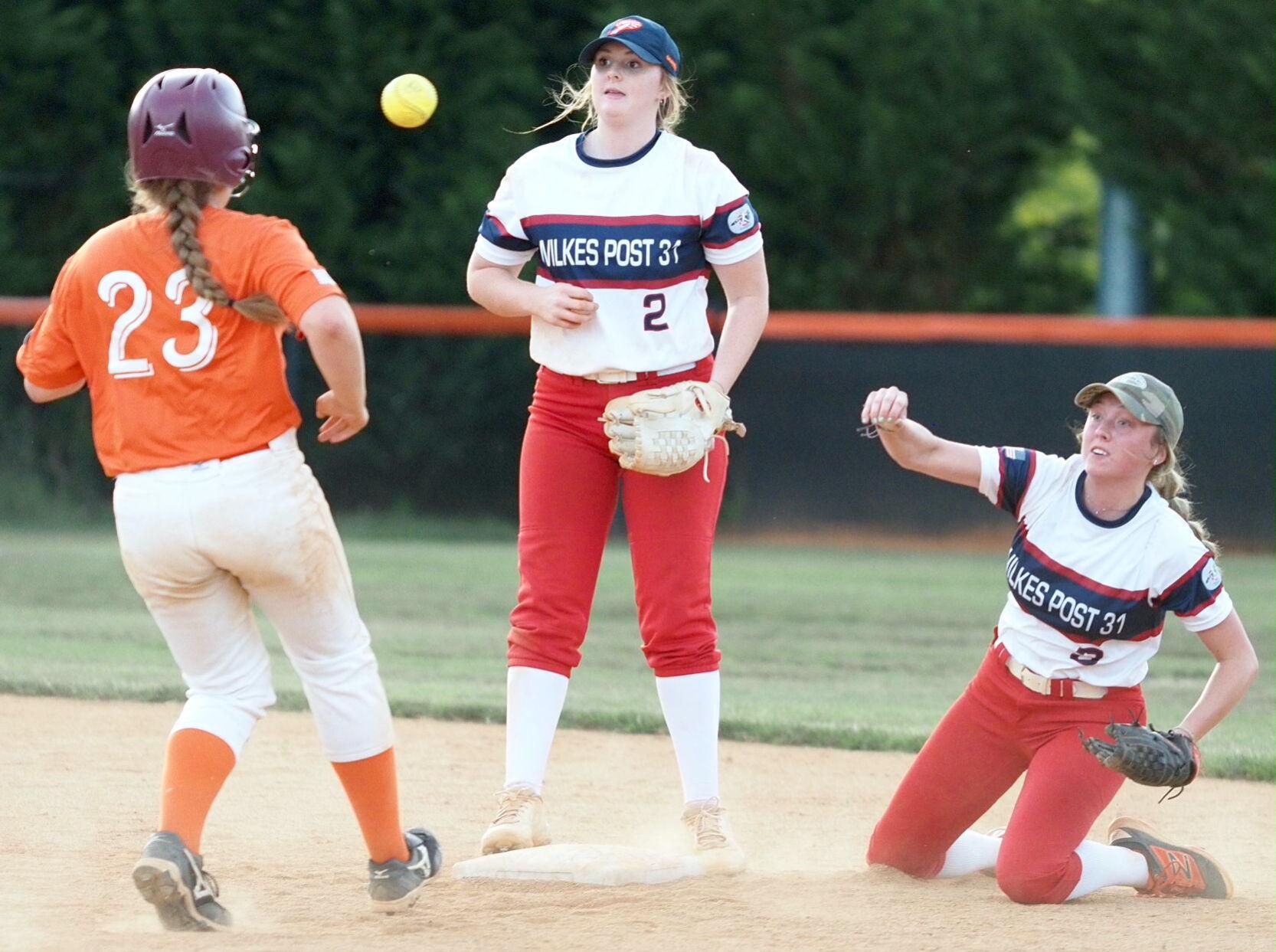 Wilkes Post 31 second baseman Sophie Nichols (right), after forcing out Caldwell's Sydney Wike, throws to first to complete a double play in the seventh inning of Wilkes' 3-2 win on June 28. Backing up the play is Post 31 shortstop Brianna Lewis.

News
'Project Flow' incentive hearings may be in August

The hearing was on the agenda for the Wilkes County commissioners’ July 1 meeting but was continued with little discussion to their Aug. 3 meeting because no update was received on the company’s plans by the end of June.

County Attorney Tony Triplett said approving a continuation avoided having to publish another legal notice announcing the hearing. County officials said they were told to expect to hear from the company by the end of June.

The company’s name, details on its plans and proposed local incentives haven’t been made public. County Manager John Yates said this information would be given in the public hearings.

The county board’s hearing on incentives was first scheduled for its May 18 meeting, but was continued to July 1 when it was learned that the company hadn’t chosen a location. For the same reason, a May 18 Wilkesboro Town Council public hearing on similar incentives for the company was canceled.

Wilkesboro Town Manager Ken Noland said in a July 1 interview that he would seek council approval of holding the town’s hearing on Aug. 2, when the council has a meeting scheduled.

Noland said that based on his conversation with a representative of the company on June 30, he believes the company is “still looking at different operational efficiencies” that affect where it makes the new investment.

“I was told that they are still working on the project. They’re looking at different options and it sounds like there are two sites (one in Wilkes and one elsewhere), but there could be more,” said Noland.

The company knows the incentives the Wilkes County and Wilkesboro governing bodies are considering and those aren’t being negotiated, he added.

Wilkesboro and Wilkes County elected officials and staff said that as requested by the company, they signed documents prohibiting them from disclosing the company’s name and what it proposed.

A JDIG is a cash grant made directly to a new or expanding company to help offset the cost of locating or expanding a facility in the state.

The amount of a JDIG award is based on a percentage of the personal income tax withholdings associated with new jobs created by the company, economic tier designation of the host county, number of net new jobs, wages of the jobs compared to the county average wage, the level of investment and whether the industry is one of the state’s targeted industry sectors.

The 40 counties ranked annually by the commerce department as most distressed counties are designated as Tier 1, the next 40 as Tier 2 and the 20 least distressed as Tier 3. Wilkes, listed with annual average wages of $38,362, is a Tier 1 county.

JDOG funds are disbursed annually for up to 12 years following the satisfaction of performance criteria set out in grant agreements.

William A. Lankford Jr. holds up his right hand and has his left hand on a Bible as he is sworn in as county tax administrator by Eddie Settle, far left, chairman of the county commissioners. Holding the Bible is Lankford’s wife, Amy Lankford.

An employee of the Wilkes County Tax Department since 2008 is the new county tax administrator.

William A. “Will” Lankford Jr.’s appointment to the position, which includes tax assessor and tax collector, was unanimously approved by the county commissioners during their July 1 meeting. It was effective that day.

He was sworn in by Eddie Settle, chairman of the commissioners. Lankford, 43, has been one of the department’s tax appraisers since Alex Hamilton, prior tax administrator, hired him.

“I’m really excited to get started,” said Lankford in an interview. “We have a great team and I want to strive to provide the best public service possible.”

He also cited educating the public about county property tax matters as a goal.

Lankford said work has started on the next county property revaluation, with new values expected to be in place for fiscal 2022-23.

“I appreciate the confidence of the county commissioners and the county manager (John Yates). I also appreciate Alex for hiring me.”

The commissioners interviewed four finalists out of 14 people who applied after Hamilton announced his plans to retire, effective June 30. Lankford was hired for a two-year term with a starting salary of $69,163.

County Attorney Tony Triplett said that under statutes, the initial term of the tax assessor must be two years and thereafter can be two or four years. Triplett said a person can be appointed tax collector for one or more years.

“Normally we appoint a person tax collector and assessor for two years, under the title of tax administrator,” Triplett said.

Commissioner Brian Minton made the motion and Commissioner Casey Joe Johnson seconded to appoint Lankford tax administrator. Also during the meeting, Lankford said he wouldn’t let the commissioners down.

He needs to complete one more tax collector course and one tax assessor course at the N.C. School of Government to be certified as a tax collector and assessor. There also are continuing education requirements.

Lankford, of Wilkesboro, has an associate degree in business administration from Wilkes Community College. He is a Wilkes native and graduated from West Wilkes High School.

He previously held an administrative position at Wilkes Medical Center and before that worked at W.A. Lankford Co. Inc., a general contractor in North Wilkesboro.