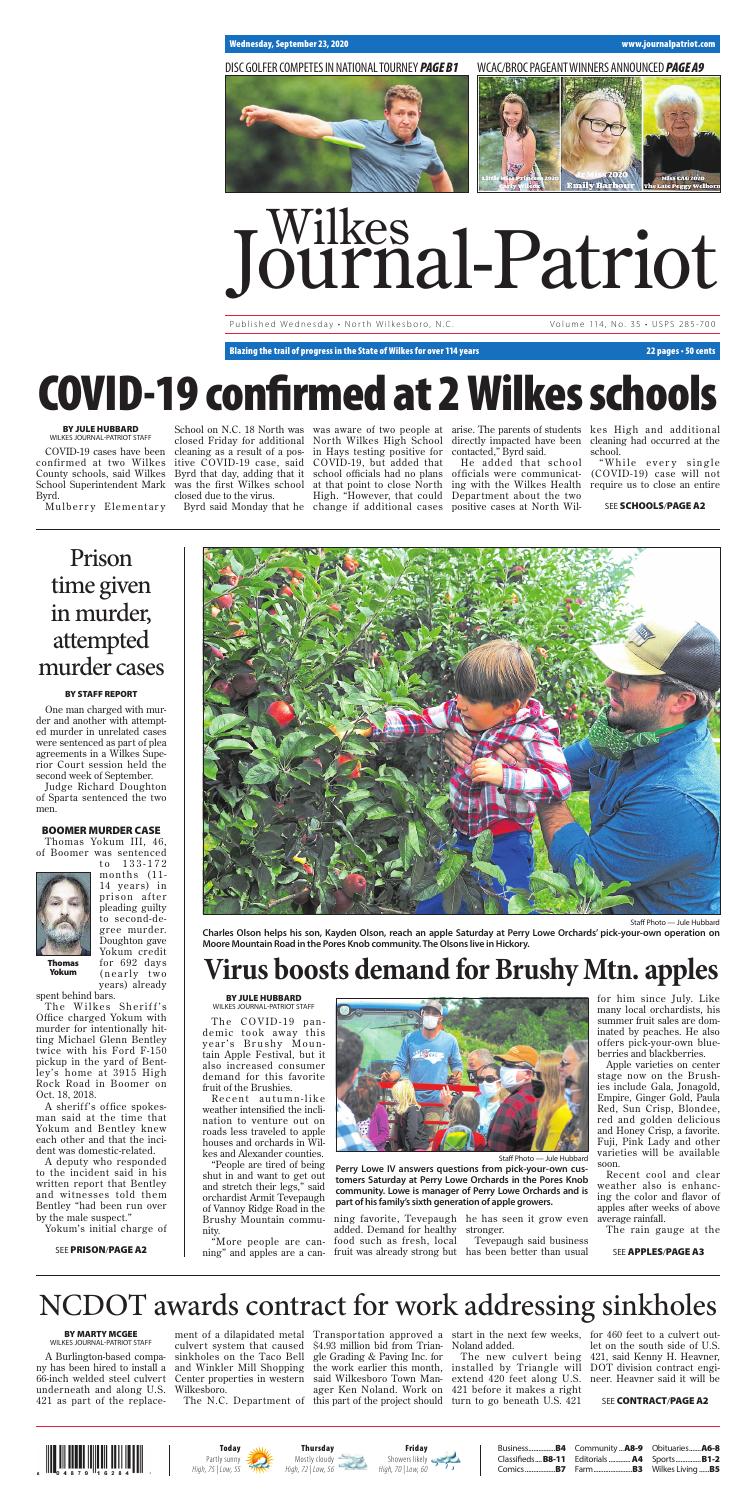 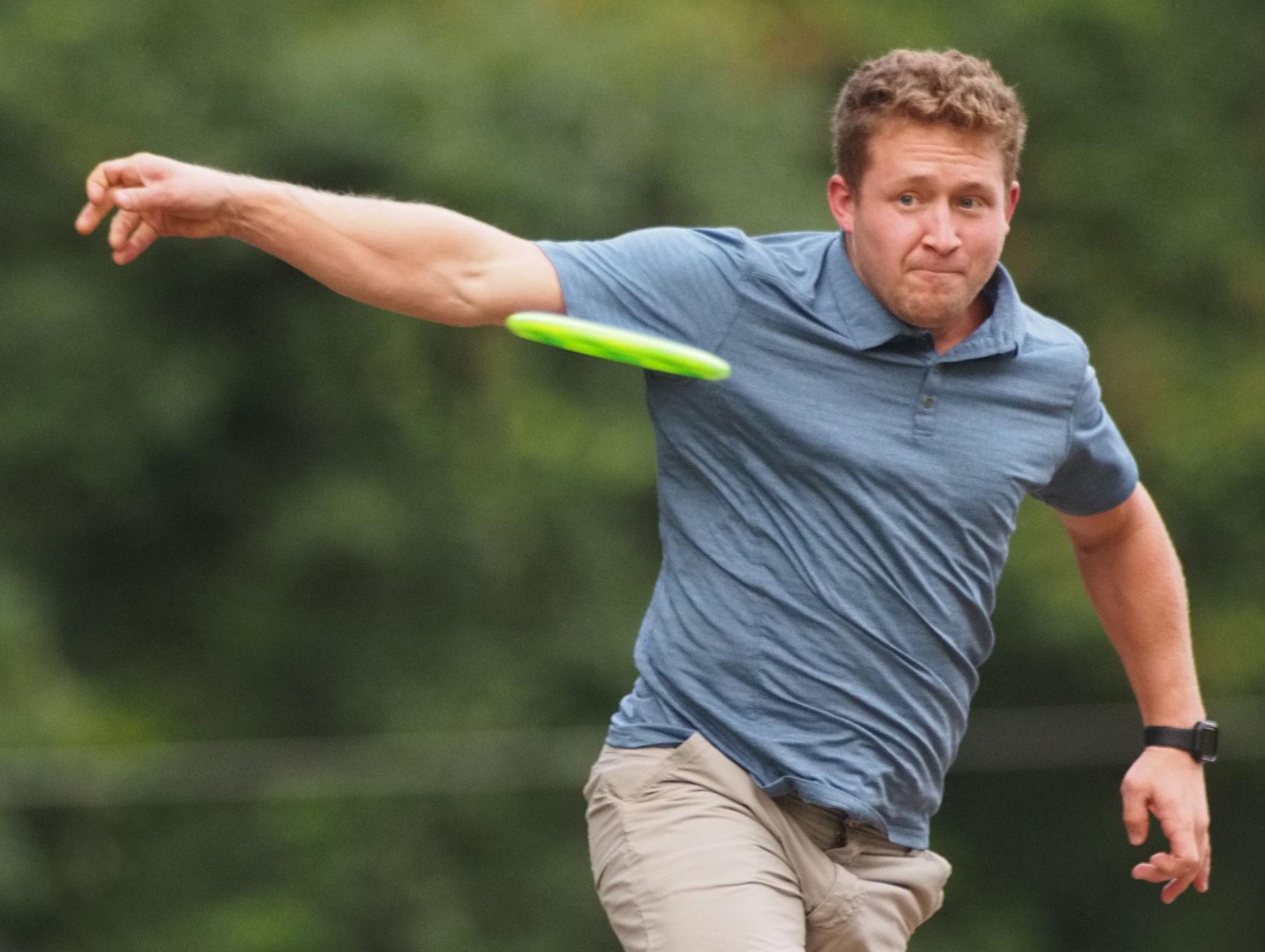 Mulberry Elementary School on N.C. 18 North was closed Friday for additional cleaning as a result of a positive COVID-19 case, said Byrd that day, adding that it was the first Wilkes school closed due to the virus.

Byrd said Monday that he was aware of two people at North Wilkes High School in Hays testing positive for COVID-19, but added that school officials had no plans at that point to close North High. “However, that could change if additional cases arise. The parents of students directly impacted have been contacted,” Byrd said.

He added that school officials were communicating with the Wilkes Health Department about the two positive cases at North Wilkes High and additional cleaning had occurred at the school.

“While every single (COVID-19) case will not require us to close an entire school, circumstances in this situation (at Mulberry) led us to believe that this was best in this instance,” said Byrd. A statement posted Thursday on Mulberry’s Facebook page said the school would be closed the next day as a “precaution… for additional deep cleaning of the building.”

The statement added, “Parents of students who are directly impacted by this situation have already been contacted…. Thank you for your understanding as we try to ensure the safety of students and staff.” The announcement, addressed to “Mulberry families,” didn’t elaborate on the “situation.” Friday was a remote learning day for all Mulberry students.

Monday of this week was already marked on the calendar as a remote learning and required teacher work day for all Wilkes schools.

In a Sept. 1 statement addressed to “Wilkes County Schools Family Member,” Byrd said the Wilkes school system would “attempt to achieve a balance of transparency with that of sharing permissible information” if COVID-19 was confirmed in a school.

“We are legally required to follow privacy requirements outlined in state statute. Thus, we cannot divulge personally identifiable health information, or information that can inadvertently lead to identification,” he added.

Byrd said announcing that a school has a COVID-19 case could inadvertently identify someone who tested positive since the person would have to be absent from school while under quarantine.

He continued, “For this reason, our current plan is to not share information each time there is an individual case in a school. Teachers will be informed that a student will be absent from their class, but we will not share with the entire faculty information about cases inside the building….

“I assure you that our system will never try to keep information from you, as we have absolutely nothing to gain from doing so. I encourage people to think of how they would feel if their child or family member tested positive, and that information was shared with others.

“Should any student or employee be directly exposed to an individual who has tested positive, procedures are clearly in place for that person or persons to be contacted by health department officials. Rest assured, if there is a need for you to be aware of a positive case, you will be contacted as soon as possible. Our school system will never hesitate to share pertinent information with you when it concerns your personal safety, or that of those around you.”

Byrd said that if a school has a “cluster” of COVID-19 cases, defined as at least five in the same school within 14 days, all students, teachers and staff will be told and the school will have to close short-term and operate under Plan C for a period after reopening. Under Plan C, all students learn remotely instead of in-person in the school.

Byrd concluded by saying he hoped he had demonstrated during the last 4½ years as superintendent that student safety is his top priority “and the importance of this will be even more significant as we face this pandemic.”

Wilkes Health Department Director Rachel Willard said she would only confirm positive COVID-19 cases in a school when it’s a cluster.

The COVID-19 pandemic took away this year’s Brushy Mountain Apple Festival, but it also increased consumer demand for this favorite fruit of the Brushies.

Recent autumn-like weather intensified the inclination to venture out on roads less traveled to apple houses and orchards in Wilkes and Alexander counties.

“People are tired of being shut in and want to get out and stretch their legs,” said orchardist Armit Tevepaugh of Vannoy Ridge Road in the Brushy Mountain community.

“More people are canning” and apples are a canning favorite, Tevepaugh added. Demand for healthy food such as fresh, local fruit was already strong but he has seen it grow even stronger.

Tevepaugh said business has been better than usual for him since July. Like many local orchardists, his summer fruit sales are dominated by peaches. He also offers pick-your-own blueberries and blackberries.

Recent cool and clear weather also is enhancing the color and flavor of apples after weeks of above average rainfall.

The rain gauge at the North Wilkesboro Water Filtration Plant measured 13.38 inches in August, almost a new record but the fourth most rain for that month in records kept since 1921.

Orchardist Gray Faw of the Brushy Mountain community, selling from his Parker Orchards apple house at the intersection of Brushy Mountain Road and Pike Road, said rain made this one of his most challenging seasons.

Faw said production expenses are up due to spraying for rain-related diseases, but he added, “I’m happy to have what we have.” The market has been good and recent cool, dry weather is exactly what is needed, he said.

Snyder said rain-related crop quality issues were most severe later in the season. Orchards at lower elevations had certain disease problems. Snyder said the invasive brown marmorated stink bug continues to be a challenge for orchardists here and statewide.

Orchardist Perry “Ty” Lowe III of Perry Lowe Orchards in the Pores Knob community said he has an excellent apple crop this year, despite problems with cracking from excessive rain. This varies among varieties, with Stayman hit hardest.

The rain and a cool spring made the apple crop at least a week later than normal. “We have eight to 10 varieties (ready to be harvested) now and we should have 20,” said Lowe.

That didn’t appear to concern the hundreds of people at Perry Lowe Orchards pick-your-own operation on Moore Mountain Road Saturday.

Most were from the Hickory, Charlotte, Winston-Salem/Greensboro and other urban areas of the state. Many were parents with young children.

Two trailers pulled by farm tractors, both able to carry about 20 people, transported visiting pickers from a site with a food truck to nearby orchard blocks and back.

Near the food truck was a new attraction, an air-powered “apple cannon.” People paid to shoot apples at targets a few hundred feet away with the 60psi cannon.

The emphasis on providing memorable experiences, along with bags of freshly-harvested apples, reflects the influence of a new generation (the sixth) in this apple-growing Lowe family.

Perry Lowe IV, manager of Perry Lowe Orchards, is spending much of his time lately on the pick-your-own operation. Responsibilities of his sister, Jessica Lowe Adams, include social media marketing. They are among the children of Ty and Katrina Lowe.

Perry Lowe Orchards apple house is on N.C. 16 near the Wilkes-Alexander county line.

A short distance down the road toward Taylorsville, the Deal Orchards (Lindsey and Alan Deal) and Sugarloaf Orchards (Bobby and Ryan Lowe) apple houses are also moving into their busiest time of the year.

Brushy Mountain Farm and Orchard (Tom and Debbie Lowe) is in the other direction on N.C. 16 toward Wilkesboro.

Other apple growers on the Brushies include Gregg Hendren on Hendren Road in the Brushy Mountain community, Hareapple Farm (Mike and Beth Graf) near the end of East Brocktown Road in the Pores Knob community and Garry Morrell (Gringo Orchards) in the Vashti community of Alexander County.

Wilkes ranks second in apple production in the state behind Henderson County.

A Burlington-based company has been hired to install a 66-inch welded steel culvert underneath and along U.S. 421 as part of the replacement of a dilapidated metal culvert system that caused sinkholes on the Taco Bell and Winkler Mill Shopping Center properties in western Wilkesboro.

The N.C. Department of Transportation approved a $4.93 million bid from Triangle Grading & Paving Inc. for the work earlier this month, said Wilkesboro Town Manager Ken Noland. Work on this part of the project should start in the next few weeks, Noland added.

The new culvert being installed by Triangle will extend 420 feet along U.S. 421 before it makes a right turn to go beneath U.S. 421 for 460 feet to a culvert outlet on the south side of U.S. 421, said Kenny H. Heavner, DOT division contract engineer. Heavner said it will be installed beneath the highway with bore and jack.

He said the culvert installed by Triangle will connect with new culvert the town is responsible for installing at a point about 530 feet north of the centerline of Winkler Mill Road.

The town’s portion of new culvert will extend in a southeasterly direction from an existing storm drain inlet in the Tractor Supply store parking lot to the section installed by Triangle near U.S. 421. Noland said design plans for the town’s portion will soon be finalized. It will also be put out for bids.

Noland said town officials hope installation of the entire new storm water culvert system will be finished within about a year.

Triangle’s contract calls for utilizing services of Graham-based Cruz Brothers Concrete Inc. for a contract price of $98,750. This is regulated by the state’s Disadvantaged Business Enterprise Special Provision.

Division 11 Engineer Mike Pettyjohn said bids submitted late this winter for the DOT portion of the work came in well above an engineer’s estimate and nine were accepted. Pettyjohn said geotechnical borings were then conducted and plans were revised to help eliminate unknown risk for bidders.

Re-advertising for new bids was then delayed by DOT budget shortfalls.

Starting about three years ago, a metal culvert system installed several decades ago beneath what now is the Taco Bell parking lot collapsed, blocking storm water and leading to sinkholes in the parking lots of Taco Bell and the nearby Winkler Mill Shopping Center. The property is owned by the J.C. Faw estate.

Under an April 11, 2019, consent judgment in Wilkes Superior Court, money from the sale of parcels in the J.C. Faw estate goes to an escrow account to reimburse the town’s costs related to maintaining public safety and replacing the collapsed culvert that caused the sinkholes.

The court decision included declaring the property with sinkholes a public nuisance and gave the town authority to make the repairs. Heavy rain occasionally caused storm water to rush across U.S. 421 and Winkler Mill Road, creating what the town has called life safety issues. 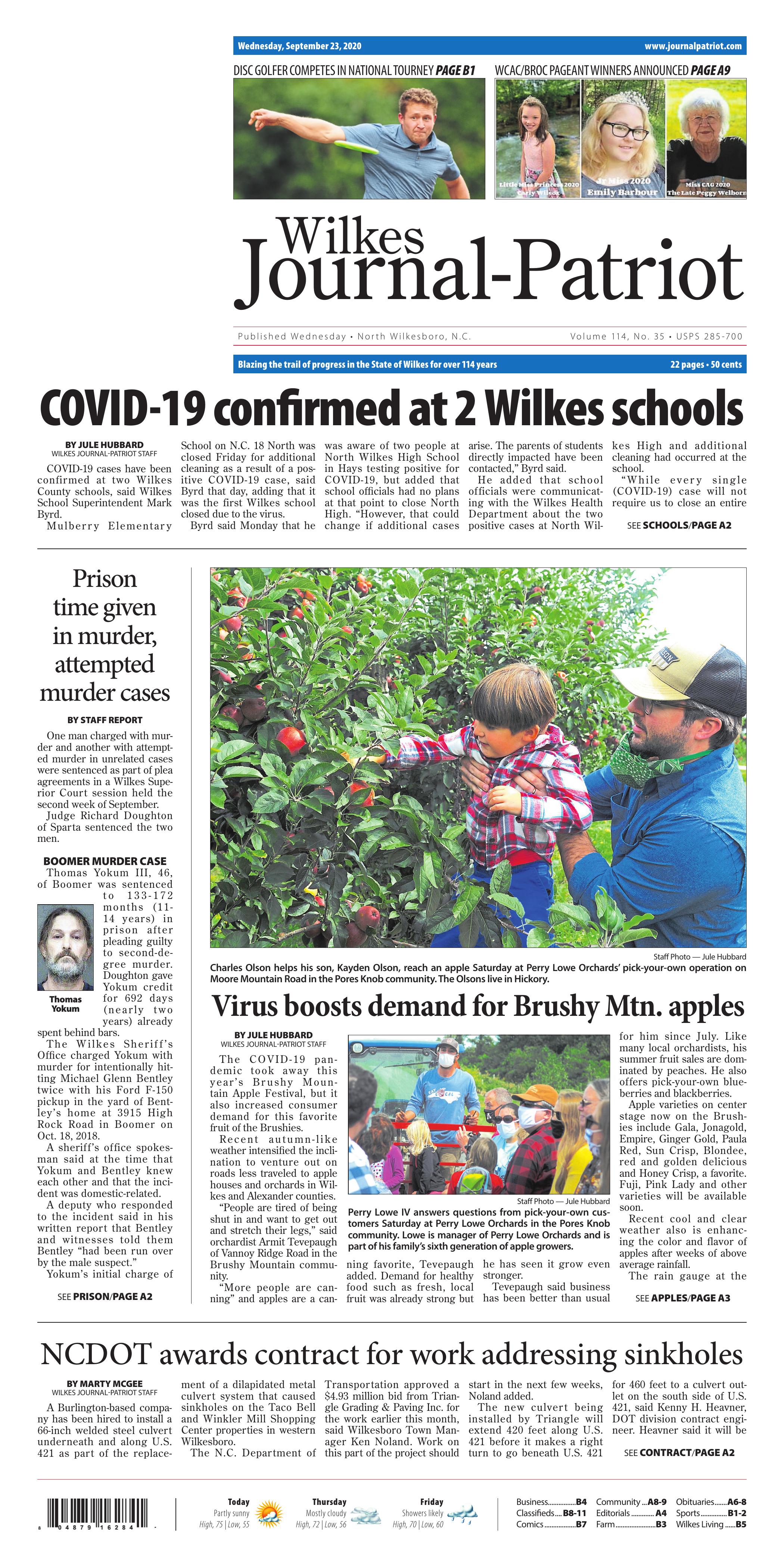