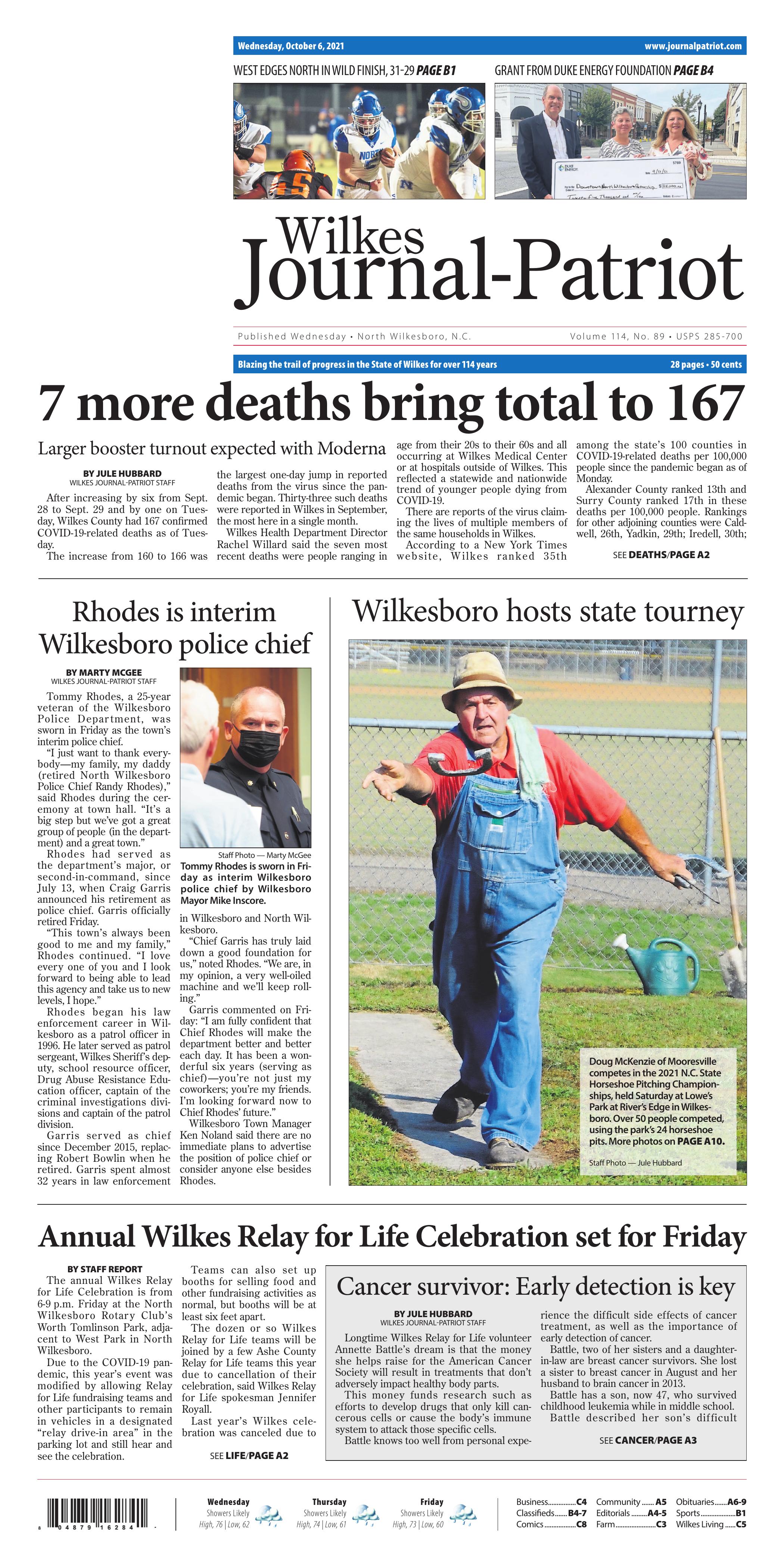 After increasing by six from Sept. 28 to Sept. 29 and by one on Tuesday, Wilkes County had 167 confirmed COVID-19-related deaths as of Tuesday.

The increase from 160 to 166 was the largest one-day jump in reported deaths from the virus since the pandemic began. Thirty-three such deaths were reported in Wilkes in September, the most here in a single month.

Wilkes Health Department Director Rachel Willard said the seven most recent deaths were people ranging in age from their 20s to their 60s and all occurring at Wilkes Medical Center or at hospitals outside of Wilkes. This reflected a statewide and nationwide trend of younger people dying from COVID-19.

There are reports of the virus claiming the lives of multiple members of the same households in Wilkes.

According to a New York Times website, Wilkes ranked 35th among the state’s 100 counties in COVID-19-related deaths per 100,000 people since the pandemic began as of Monday.

Meanwhile, the daily increase in new COVID-19 cases in Wilkes continues to drop.

The Wilkes Health Department reported that by Monday, 10,212 Wilkes residents had tested positive for COVID-19 since the pandemic began. That was up by 53 from 10,159 on Friday. Case totals the prior three Friday to Monday periods, starting most recently, increased by 110, 127 and 187.

Willard also reported that a little over 60 people received booster shots of the Pfizer vaccine Friday in the health department’s first drive-through clinic for this additional protection from the virus. This was conducted by appointment at Lowe’s Park at River’s Edge in Wilkesboro.

She said the majority of people receiving a booster shot Friday were eligible because they are at higher risk for reasons other than being 65 or older, including their medical conditions, working in high-risk professions or conditions or living or working in places where many people are together under the same roof.

She said the health department anticipates significantly more Wilkes residents seeking booster shots when the Modern booster vaccine is approved because it will make it available to many more older adults.

As of Monday, only 20 people had made appointments for Pfizer booster shots at the health department this week.

DHHS reported that only 42% of Wilkes residents were fully vaccinated by Monday, keeping Wilkes among North Carolina counties with the lowest vaccination percentages.

Willard said only about 4%% of Wilkes residents ages 12-17 are fully vaccinated. 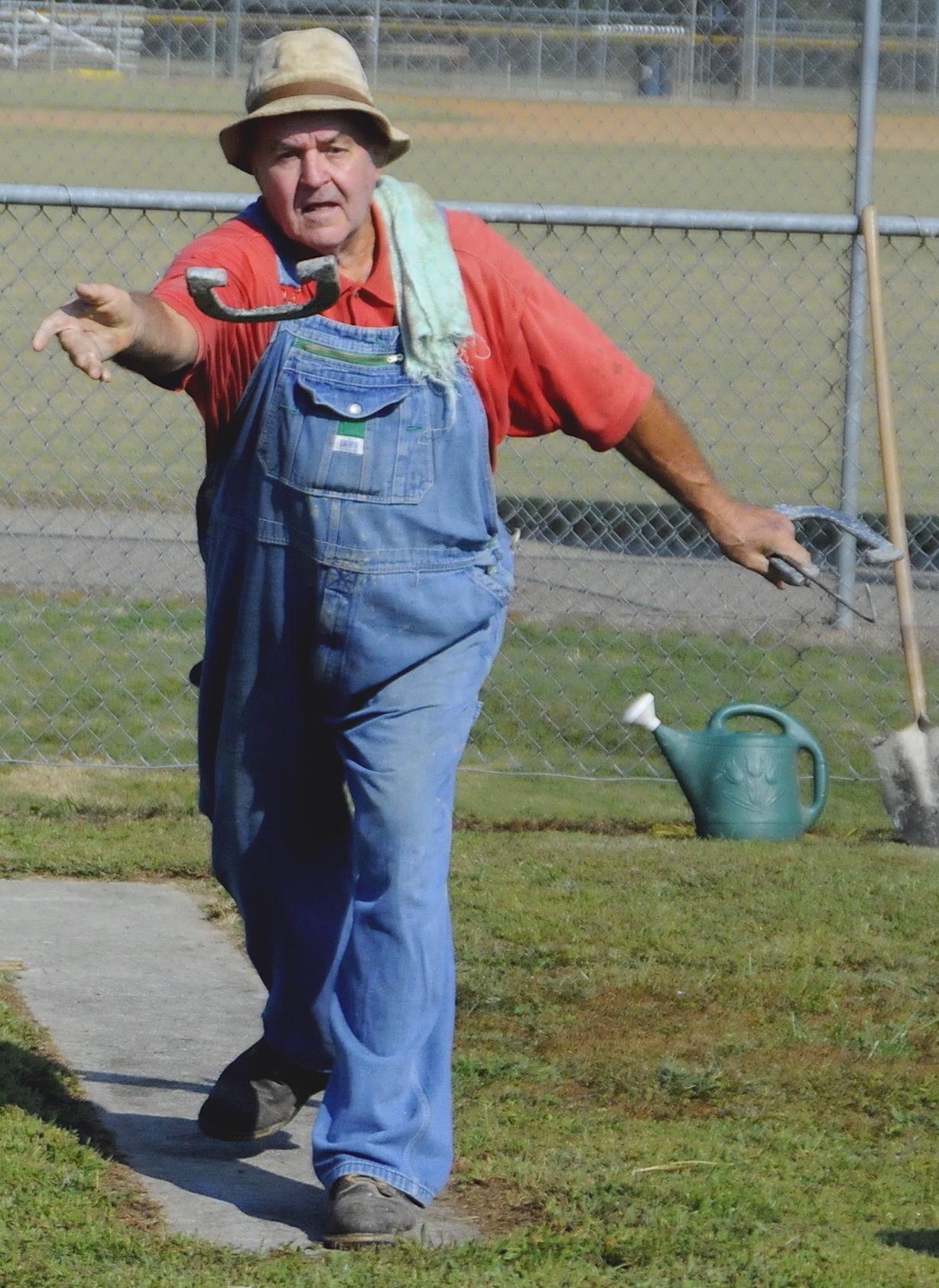 The annual Wilkes Relay for Life Celebration is from 6-9 p.m. Friday at the North Wilkesboro Rotary Club’s Worth Tomlinson Park, adjacent to West Park in North Wilkesboro.

Due to the COVID-19 pandemic, this year’s event was modified by allowing Relay for Life fundraising teams and other participants to remain in vehicles in a designated “relay drive-in area” in the parking lot and still hear and see the celebration.

Teams can also set up booths for selling food and other fundraising activities as normal, but booths will be at least six feet apart.

Last year’s Wilkes celebration was canceled due to COVID-19 and this year’s event was delayed by several months.

This included funds from the sale of over 2,000 luminaries, which will be placed along a circular route within the park and lit in memory of loved ones who died from cancer.

Luminaries will still be for sale at the event for $10 each.

Michelle Tedder will sing the National Anthem, Russell Golds will give the opening prayer and Karen Shepherd Hill will be the guest speaker. There will live music by the Rocky Point Band.

Those who wish can participate in a memorial walk by the luminaries, which are glo-sticks in paper bags labeled with names of people they memorialize.

Cancer survivors and caregivers will be invited to participate in another walk by the luminaries and receive gift bags.

More details are available by contacting Danielle Sowell at danielle.sowell@cancer.org or at 276-494-3488.

Longtime Wilkes Relay for Life volunteer Annette Battle’s dream is that the money she helps raise for the American Cancer Society will result in treatments that don’t adversely impact healthy body parts.

This money funds research such as efforts to develop drugs that only kill cancerous cells or cause the body’s immune system to attack those specific cells.

Battle knows too well from personal experience the difficult side effects of cancer treatment, as well as the importance of early detection of cancer.

Battle has a son, now 47, who survived childhood leukemia while in middle school.

Battle described her son’s difficult two-year treatment regimen for leukemia, which included virtual isolation due to being immunocompromised from chemotherapy. “We were told that he had a 50-50 chance of survival,” she said.

The first year, he spent a week receiving chemo at Wake Forest Baptist Medical Center in Winston-Salem every 28 days and had six weeks of radiation treatment. “The second year, about half of his (chemotherapy) treatments were at home, but he still couldn’t see anyone.”

Battle said her son recovered and now is married with two children. He runs marathons as part of his efforts to stay strong and healthy as his doctors advised.

“Now, the treatment isn’t as severe for the type of leukemia he had and the prognosis is much better,” said Battle, illustrating ongoing advances in cancer treatment.

“As soon as he finished his treatment, I found out that I had breast cancer,” she said. This was followed by eight months of treatment.

Battle was the first of four sisters diagnosed with breast cancer and none were found to have the gene that most often indicates the likelihood of breast cancer.

She said forgetfulness was the first indication that her husband had brain cancer, although this wasn’t realized until later.

“He would leave the refrigerator door open or leave the tailgate of his pickup down, which wasn’t at all like him. He started getting confused with his driving,” said Battle.

After about a month of this gradually worsening, it was determined in a medical examination that he had brain cancer. “It was inoperable because the tumor was deep in the middle of his brain…. Chemotherapy wouldn’t do any good either.”

Battle said her husband died about 13 months later, which was the life expectancy given when he was diagnosed. He was 71. “Brain cancer was the last thought we had. His dad lived to be 103 and his mother was 100 when she died.”

Battle said her message to others is to be aware of your body’s condition.

“If something is going on, find out what it is and what is causing it. Knowledge is power. The earlier you start treatment (if it’s cancer), the less severe the treatment will be and the better your chances of survival.”

In particular, she emphasized the importance of annual mammograms and frequent self-examination for women.

Battle has been a volunteer with Wilkes Relay for Life for about 25 years. She and Ann Rita Necessary have co-chaired the Necessary-Battle/Steel Magnolias Relay for Life fundraising team since the team was formed.

“We have a bunch of hardworking and determined girls on the team,” said Battle. They man the gift shop at MerleFest and a booth at Carolina in the Fall, both in Wilkesboro, each year. They also hold the annual Shred Day, an opportunity for the public to have papers with personal identification information shredded.

Tommy Rhodes, a 25-year veteran of the Wilkesboro Police Department, was sworn in Friday as the town’s interim police chief.

“I just want to thank everybody—my family, my daddy (retired North Wilkesboro Police Chief Randy Rhodes),” said Rhodes during the ceremony at town hall. “It’s a big step but we’ve got a great group of people (in the department) and a great town.”

Rhodes had served as the department’s major, or second-in-command, since July 13, when Craig Garris announced his retirement as police chief. Garris officially retired Friday.

“This town’s always been good to me and my family,” Rhodes continued. “I love every one of you and I look forward to being able to lead this agency and take us to new levels, I hope.”

“Chief Garris has truly laid down a good foundation for us,” noted Rhodes. “We are, in my opinion, a very well-oiled machine and we’ll keep rolling.”

Garris commented on Friday: “I am fully confident that Chief Rhodes will make the department better and better each day. It has been a wonderful six years (serving as chief)—you’re not just my coworkers; you’re my friends. I’m looking forward now to Chief Rhodes’ future.”

Wilkesboro Town Manager Ken Noland said there are no immediate plans to advertise the position of police chief or consider anyone else besides Rhodes.