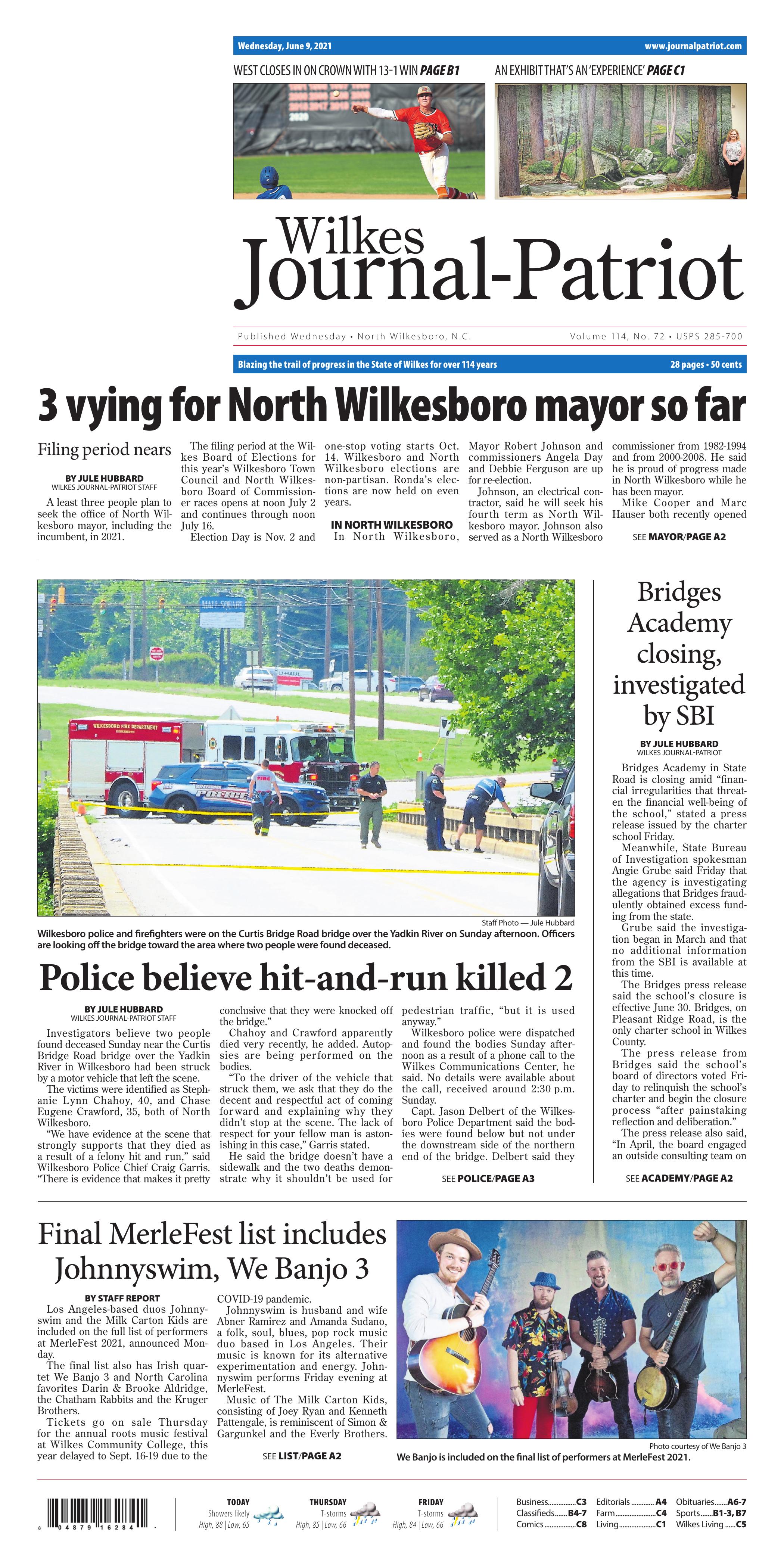 A least three people plan to seek the office of North Wilkesboro mayor, including the incumbent, in 2021.

The filing period at the Wilkes Board of Elections for this year’s Wilkesboro Town Council and North Wilkesboro Board of Commissioner races opens at noon July 2 and continues through noon July 16.

In North Wilkesboro, Mayor Robert Johnson and commissioners Angela Day and Debbie Ferguson are up for re-election.

Mike Cooper and Marc Hauser both recently opened campaign finance committees at the Wilkes Board of Elections as candidates for North Wilkesboro mayor. Both are seeking elected office for the first time.

Hauser said he was a national sales manager for Honeywell before he retired. He said that at Honeywell, “everything was result- and goal-oriented. I want to bring that to the town” government. He also said he wants to make the town more attractive and prosperous.

Day said she will seek her second four-year term on the North Wilkesboro board, while Ferguson said she doesn’t plan to run again. Day said there are certain projects she helped start and wants to continue working on as a commissioner. She is a Realtor and the owner of Ivy Ridge Traditions on Main Street, North Wilkesboro.

Ferguson said, “I have found my time on the board very rewarding, but it’s time for me to move on. I’m very grateful to the people of North Wilkesboro for allowing be to serve for four terms,” she said. Ferguson said the March 3, 2020, death of her husband, Harold “Mule” Ferguson, was a factor in her decision to not run again.

Ferree is seeking his third four-year term on the Wilkesboro council. Ferree said he is running because he wants to give back to the town that has meant much to him and his family and because he is excited about new opportunities for Wilkesboro. Ferree is an attorney with his office in Wilkesboro.

Archibald was elected to the council in 2009. She didn’t seek re-election when that term ended, but was elected in 2017. She said she wants to remain on the council to work toward completion of the Cub Creek Park expansion and development of a pickleball association. Archibald, retired advertising director for the Wilkes Journal-Patriot, said she is excited about what expansion of the town’s wastewater treatment plant can mean for economic development.

Investigators believe two people found deceased Sunday near the Curtis Bridge Road bridge over the Yadkin River in Wilkesboro had been struck by a motor vehicle that left the scene.

The victims were identified as Stephanie Lynn Chahoy, 40, and Chase Eugene Crawford, 35, both of North Wilkesboro.

“We have evidence at the scene that strongly supports that they died as a result of a felony hit and run,” said Wilkesboro Police Chief Craig Garris. “There is evidence that makes it pretty conclusive that they were knocked off the bridge.”

Chahoy and Crawford apparently died very recently, he added. Autopsies are being performed on the bodies.

“To the driver of the vehicle that struck them, we ask that they do the decent and respectful act of coming forward and explaining why they didn’t stop at the scene. The lack of respect for your fellow man is astonishing in this case,” Garris stated.

He said the bridge doesn’t have a sidewalk and the two deaths demonstrate why it shouldn’t be used for pedestrian traffic, “but it is used anyway.”

Wilkesboro police were dispatched and found the bodies Sunday afternoon as a result of a phone call to the Wilkes Communications Center, he said. No details were available about the call, received around 2:30 p.m. Sunday.

Capt. Jason Delbert of the Wilkesboro Police Department said the bodies were found below but not under the downstream side of the northern end of the bridge. Delbert said they were on the ground in a brushy area without large trees, about 50-80 feet from the Yadkin.

The distance from the bridge railing to the ground where the bodies were found is about 70 feet.

One tennis shoe and other small items not identifiable from a distance were on the bridge between the northbound travel lane and the downstream railing Sunday while police were there.

Any significance of these items wasn’t clear, but they were close to where officers stood as they occasionally looked off the side of the bridge toward where the bodies were found.

The Wilkesboro Fire Department kept Curtis Bridge Road closed to traffic at both ends of the bridge for several hours Sunday as investigators worked at the scene.

Garris said the incident is being aggressively investigated, but no more information is being released at this time. He asked that anyone with information concerning the identity of the suspect vehicle call the Wilkesboro Police Department at 336-667-7277. He said information can be provided anonymously by calling Wilkes Crime Stoppers at 336-667-8900.

Five deaths in one monthWith the case involving Crawford and Chahoy, authorities are now investigating five deaths in Wilkesboro within the last month.

Garris said officers went there to check on Moore’s well-being and made forcible entry after seeing two unresponsive bodies on the floor. Walden Point Drive is off Winkler Mill Road.

He said there were no obvious signs of foul play leading to their deaths and added on June 3 that there was “nothing on the physical side” of the autopsies of the two bodies to suggest involvement of criminality.

He also said investigators didn’t expect to receive reports on toxicology portions of the Moore and Johnson autopsies within the next five weeks. A toxicology report has results of lab procedures that identify and quantify potential toxins, including prescription medications and illegal drugs.

Garris said officers are also still awaiting the toxicology portion from the autopsy on the body of Anthony Garrett Absher, 31, of 409 South Cherry Street, Wilkesboro. Absher’s body was found in a large dumpster behind his home on May 6. “There is no indication of any obvious foul play” in Absher’s death, he said.

Garris said the State Bureau of Investigation is assisting in the investigation of the deaths of Absher, Crawford and Chahoy, but not the deaths at Walden Ridge Apartments.

We Banjo is included on the final list of performers at MerleFest 2021.

Darin & Brooke Aldridge will return to MerleFest in September.

Los Angeles-based duos Johnnyswim and the Milk Carton Kids are included on the full list of performers at MerleFest 2021, announced Monday.

The final list also has Irish quartet We Banjo 3 and North Carolina favorites Darin & Brooke Aldridge, the Chatham Rabbits and the Kruger Brothers.

Tickets go on sale Thursday for the annual roots music festival at Wilkes Community College, this year delayed to Sept. 16-19 due to the COVID-19 pandemic.

Johnnyswim is husband and wife Abner Ramirez and Amanda Sudano, a folk, soul, blues, pop rock music duo based in Los Angeles. Their music is known for its alternative experimentation and energy. Johnnyswim performs Friday evening at MerleFest.

The Irish/bluegrass/old-time sound of We Banjos 3 catapulted the band to the top of the Billboard Bluegrass and World Music charts. Known as one of the best live acts to come out of Ireland in many years, the multi-award winning trio brings fiddle, guitar, mandolin and banjo virtuosity to MerleFest. We Banjo 3 performs Saturday and Sunday.

Volunteer applications for MerleFest, with Window World as presenting sponsor, are being accepted. Chris Austin Songwriting Contest (CASC) submissions will be accepted until June 15.

Information on both and much more can be found at www.merle fest.org.

Bridges Academy began use of a new 12,000-square-foot Early Learning Program Center at the start of this 2020-21 school year. It’s across the street from the school’s other facilities.

Bridges Academy in State Road is closing amid “financial irregularities that threaten the financial well-being of the school,” stated a press release issued by the charter school Friday.

Grube said the investigation began in March and that no additional information from the SBI is available at this time.

The Bridges press release said the school’s closure is effective June 30. Bridges, on Pleasant Ridge Road, is the only charter school in Wilkes County.

The press release from Bridges said the school’s board of directors voted Friday to relinquish the school’s charter and begin the closure process “after painstaking reflection and deliberation.”

The press release also said, “In April, the board engaged an outside consulting team on an interim basis to assist the board in enhancing and rebuilding our leadership team.

“This decision was made after leadership and administrative changes within Bridges Academy.

“During the consultant’s initial review process, irregularities within the school’s operations were discovered. Soon after this discovery, the state auditor separately initiated an investigative audit of the school.

“The board has been fully cooperating with the state audit, while also conducting its own investigation into finances, administration, and provision of services.

“As both the state audit and the school’s investigation have continued, it has become apparent that there were financial irregularities that threaten the financial well-being of the school, and impact Bridges Academy’s ability to operate within the boundaries of its charter.

“These irregularities were concealed from the board of directors and have resulted in insurmountable financial challenges.

“After painstaking reflection and deliberation, on June 4, 2021, Bridges Academy’s board of directors voted to relinquish its charter and move forward with closure of the school effective June 30, 2021.

“This decision impacts a community of people whose needs have been met by Bridges Academy since 1996.

“We did not make this decision lightly, and we recognize the uncertainty this creates for our families.

“We will continue to share information with our community as the investigations move forward, and we will do whatever we can to assist families in next steps. Bridges Academy has been honored to serve our school community.

“The board of directors will continue its cooperation with the state audit, the Office of Charter Schools, as well as the Charter School Advisory Board and the State Board of Education as we wind down operations.”

The press release was sent by Lisa Gordon Stella, a Raleigh-based attorney representing Bridges Academy who has extensive experience working with charter schools.

According to the Bridges website, a new principal was hired there in 2020-21 “to help guide our teachers and improve the school as a whole.” The website said the new principal instituted many new programs, including N.C. Check-In’s to monitor student progress, growth and information retention.

Bridges met expected academic growth in 2019-20 and 2018-19. It met expected growth in two of the four prior years and didn’t meet it in the other two years.

Eighty% of a school’s letter grade is based on the percentage of its students earning an end of grade (EOG) or end of course (EOC) test score considered grade-level proficient and the other 20% on growth, measured by a statistical model that compares each student’s predicted test score, based on past performance against actual results.

Whether a school exceeds, meets or doesn’t meet expected academic growth is based on EOG reading and math test scores in grades 3-8 and English and math EOC test scores in high schools.

The U.S. Department of Education waived statewide accountability ratings, spring assessments, and certain reporting requirements for the 2019-20 school year due to COVID-19.

Bridges Educational Foundation Inc. was established in October 1996 as a non-profit corporation. Mary Ann Finger is listed as the incorporating agent, with a mailing address and office in Jonesville.

Charter schools are publicly-funded, privately-managed and semi-autonomous schools of choice. They do not charge tuition. They are exempt from certain requirements but must hold to the same academic accountability measures as traditional schools. They receive public funding similarly to traditional schools.