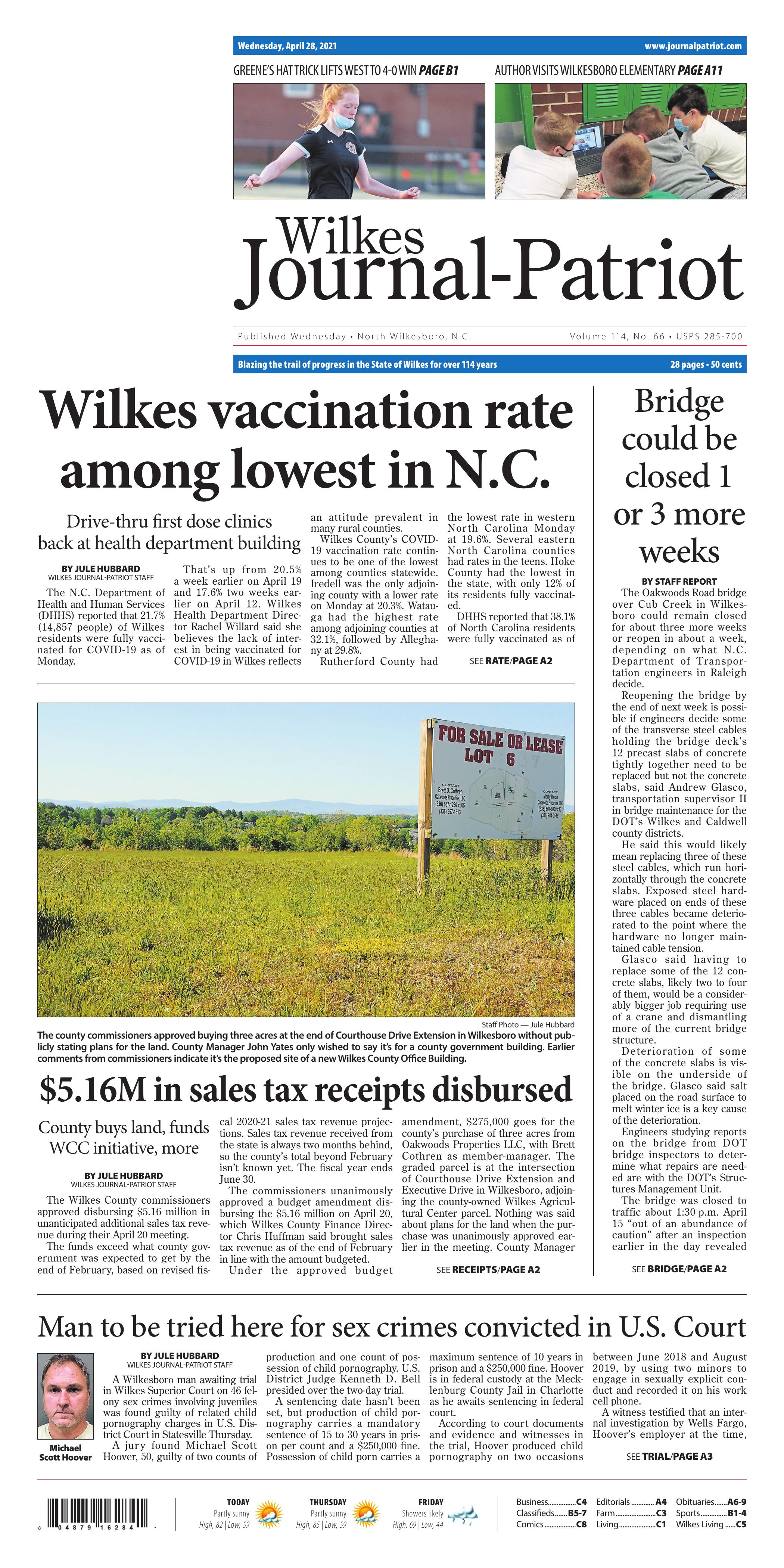 The N.C. Department of Health and Human Services (DHHS) reported that 21.7% (14,857 people) of Wilkes residents were fully vaccinated for COVID-19 as of Monday.

That’s up from 20.5% a week earlier on April 19 and 17.6% two weeks earlier on April 12. Wilkes Health Department Director Rachel Willard said she believes the lack of interest in being vaccinated for COVID-19 in Wilkes reflects an attitude prevalent in many rural counties.

Wilkes County’s COVID-19 vaccination rate continues to be one of the lowest among counties statewide. Iredell was the only adjoining county with a lower rate on Monday at 20.3%. Watauga had the highest rate among adjoining counties at 32.1%, followed by Alleghany at 29.8%.

DHHS reported that 38.1% of North Carolina residents were fully vaccinated as of Monday, up from 34.2% a week earlier and 30.01% two weeks earlier.

As of Monday, 6,527 Wilkes residents had tested positive for COVID-19 since the pandemic began. That was 59 more than a week earlier. The total on April 19 was 83 more than on April 12. It increased by 47 in the week before that.

Willard said students will need parental permission to be vaccinated. The Pfizer vaccine is approved for people as young as 16. The minimum age for other vaccines is 18.

She said plans are also being made to take another health department van, newly acquired with COVID-19 relief funds, to community centers and other locations for vaccination clinics.

Willard said weekly drive-through vaccination clinics at Lowe’s Park at River’s Edge in Wilkesboro are now instead being held at the health department building on College Street in Wilkesboro due to reduced demand.

This began with the first dose drive-through clinic scheduled at River’s Edge the morning of April 22 being moved to the health department building. Willard said 106 people were vaccinated instead of the goal of 120.

A second dose drive-through clinic was held at River’s Edge the morning of April 23.

Appointments for first dose vaccinations are available in drive-through clinics at the health department from 10 a.m. to 4 p.m. Mondays, Wednesdays and Fridays and from 4-6 p.m. Tuesdays and Thursdays.

Second dose drive-through clinics with the Pfizer vaccine are scheduled at Lowe’s Park at River’s Edge in Wilkesboro from 9-10:30 a.m. April 30 and from 9-11 a.m. May 7.

Willard said people should get their second dose vaccinations from the health care provider who gave them the first dose because second dose allocations are based on first doses.

Vaccination appointments with the health department can be scheduled for first or second doses by calling 336-990-9950 from 8:30 a.m. to 4 p.m. Monday through Friday.

There is no charge for COVID-19 vaccinations.

The county commissioners approved buying three acres at the end of Courthouse Drive Extension in Wilkesboro without publicly stating plans for the land. County Manager John Yates only wished to say it’s for a county government building. Earlier comments from commissioners indicate it’s the proposed site of a new Wilkes County Office Building.

The funds exceed what county government was expected to get by the end of February, based on revised fiscal 2020-21 sales tax revenue projections. Sales tax revenue received from the state is always two months behind, so the county’s total beyond February isn’t known yet. The fiscal year ends June 30.

The commissioners unanimously approved a budget amendment disbursing the $5.16 million on April 20, which Wilkes County Finance Director Chris Huffman said brought sales tax revenue as of the end of February in line with the amount budgeted.

Under the approved budget amendment, $275,000 goes for the county’s purchase of three acres from Oakwoods Properties LLC, with Brett Cothren as member-manager. The graded parcel is at the intersection of Courthouse Drive Extension and Executive Drive in Wilkesboro, adjoining the county-owned Wilkes Agricultural Center parcel. Nothing was said about plans for the land when the purchase was unanimously approved earlier in the meeting. County Manager John Yates said later that it’s for a county government building. Statements by commissioners indicate the land is the proposed site of a new Wilkes County Office Building.

County Attorney Tony Triplett said Cothren approved the sales contract, which lists a closing date of May 27. Yates said the “pad ready,” three-acre parcel, once part of the Northwestern Bank headquarters property, was preferred over any of the nearby undeveloped, county-owned Call property.

In a related matter that same night, the commissioners set a work session for 5 p.m. May 11 to consider “design-build” proposals for three capital projects in phases — constructing a new county office building, renovating the current county office building for the Wilkes Health Department and constructing an emergency services building on the Call property along Call Street, near Oakwoods Road. Friday is the deadline for design-build proposals from contractors.

Students must have lived in WCC’s service area for at least a year to be eligible. They must have had at least a 2.0 grade point average in high school and maintain at least this at WCC. Cox said $6 million needs to be raised, in addition to $2.5 million already raised, it to be permanently endowed. Annual costs are projected at about $350,000.

Eddie Settle, chairman of the commissioners, said having a better educated workforce in Wilkes is vital for economic development.

• allocations of $632,000 and $250,000 for the Wilkes County Schools, the school system’s shares of Article 42 and Article 40 half-cent sales tax revenue respectively;

• transferring $1.5 million to the Wilkes County Airport Enterprise Fund. During the April 20 meeting, the commissioners unanimously approved a $1.32 million bid from Jefferson-based Carolina Grading & Utilities Inc. for installing a 125,000-gallon water storage tank and a booster pump station at the airport to improve fire protection. They also unanimously approved a contract paying Charlotte-based W.K. Dickson Co. $159,400 for construction administration and observation and geo-technical testing for the project. Unlike most Wilkes airport projects, no grant funds are involved;

When the county’s 2020-21 budget was approved in May, it included a 24.5% drop in sales tax revenue due to the pandemic. This was later revised to an amount similar to sales tax revenue in 2019-20 when this revenue significantly increased instead of decreasing during the pandemic. This was attributed to Wilkes residents shopping at home and online more instead of spending money out of town, along with federal stimulus checks households received.

Keith Elmore was the only commissioner who asked a question or commented on the budget amendments. Elmore asked if all of the funds involved were sales tax revenue.

Elmore was told that they all involved sales tax revenue, except two that are in addition to the budget amendments that add up to about $5.16 million.

The other two total $1.04 million for the Wilkes Health Department, including $547,918 in COVID-19 funding from the state for COVID-19 testing and contact tracing, as well as supplies and equipment for COVID-19 patients. The remainder is $500,000 in Medicaid reimbursements for the Wilkes Dental Clinic.

According to court documents and evidence and witnesses in the trial, Hoover produced child pornography on two occasions between June 2018 and August 2019, by using two minors to engage in sexually explicit conduct and recorded it on his work cell phone.

Hoover is scheduled for trial on the related state charges in the May 3 session of Wilkes County Superior Court. These include 23 counts of second-degree sexual exploitation of a minor, 19 counts of indecent liberties with a child and two counts apiece of attempted statutory sex offense and first-degree sexual offense.

Assistant District Attorney Matthew Leach of the 34th Prosecutorial District said Hoover’s conviction in federal court doesn’t preclude the DA’s office from moving ahead with his cases in Wilkes Superior Court, “but we will evaluate when the federal case is concluded.”

The Wilkes Sheriff’s Office arrested Hoover in August 2019 on his initial sex offenses charges, which involved four victims. In November 2019, more state charges were filed in connection with offenses involving three other juveniles.

Det. Nancy Graybeal of the Wilkes Sheriff’s Office said three years ago that some of the state charges against Hoover involved video and photo images of a 17-year-old committing sexual acts in Wilkes from June to August 2018. She said four counts of indecent liberties and two counts of first-degree sex offense resulted from acts in Wilkes involving a victim under age 16 from 2017 through August 2019.

Graybeal said juveniles identified as victims came in contact with Hoover in a variety of situations. Another sheriff’s office spokesman described all of the victims as “family acquaintances” but not relatives of Hoover. The investigation began after at least one victim told an adult what had happened, and this was reported to law enforcement.

Hoover has been in custody since he was arrested, including in the Mecklenburg County Jail since October 2020. Bonds set for him in four counties total $1,225,000.

News
Based on work needed, bridge could be closed 1 or 3 more weeks

The Oakwoods Road bridge over Cub Creek in Wilkesboro could remain closed for about three more weeks or reopen in about a week, depending on what N.C. Department of Transportation engineers in Raleigh decide.

Reopening the bridge by the end of next week is possible if engineers decide some of the transverse steel cables holding the bridge deck’s 12 precast slabs of concrete tightly together need to be replaced but not the concrete slabs, said Andrew Glasco, transportation supervisor II in bridge maintenance for the DOT’s Wilkes and Caldwell county districts.

He said this would likely mean replacing three of these steel cables, which run horizontally through the concrete slabs. Exposed steel hardware placed on ends of these three cables became deteriorated to the point where the hardware no longer maintained cable tension.

Glasco said having to replace some of the 12 concrete slabs, likely two to four of them, would be a considerably bigger job requiring use of a crane and dismantling more of the current bridge structure.

Deterioration of some of the concrete slabs is visible on the underside of the bridge. Glasco said salt placed on the road surface to melt winter ice is a key cause of the deterioration.

Engineers studying reports on the bridge from DOT bridge inspectors to determine what repairs are needed are with the DOT’s Structures Management Unit.

The bridge was closed to traffic about 1:30 p.m. April 15 “out of an abundance of caution” after an inspection earlier in the day revealed repairs are needed, stated a DOT press release. An inspection conducted every two years found that some of the longitudinal and transverse steel cables holding the bridge deck’s 12 precast slabs of concrete tightly together had failed.

The two-lane, three-span Oakwoods Road bridge over Cub Creek was constructed in 1969, and underwent major repairs with placement of a couple of steel I-beams lengthwise under the bridge several years ago. The bridge’s weight limit was reduced to 19 tons for single vehicles and 25 tons for tractor-trailers some time back.

The official detour, marked with detours signs, calls for taking Old U.S. 421 east from Wilkesboro to N.C. 115 and then to U.S. 421 Bypass near C.C. Wright Elementary School.

In the DOT’s current Transportation Improvement Program (TIP), right of way acquisition for a new Oakwoods Road bridge over Cub Creek is scheduled to start in June 2026 and construction in June 2028.