About 50 people attended an emergency Wilkes Board of Education meeting Monday night, held to consider passage of a mask mandate in the Wilkes schools. One of 24 people who addressed the board is speaking.

Three of five Wilkes school board members listen to comments of residents during their meeting Monday. From left are Rudy Holbrook, chairman, and board members Hardin Kennedy and Kirk Walker. 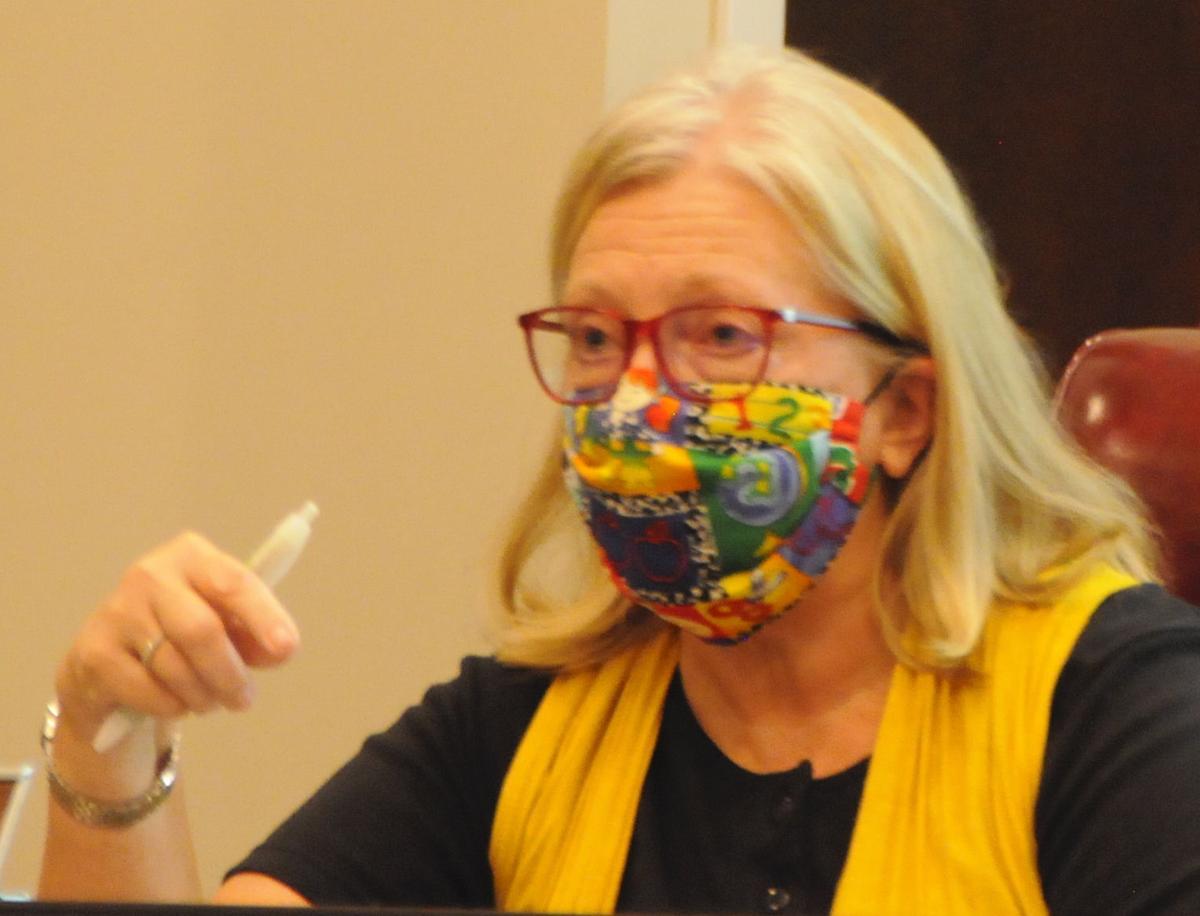 About 50 people attended an emergency Wilkes Board of Education meeting Monday night, held to consider passage of a mask mandate in the Wilkes schools. One of 24 people who addressed the board is speaking.

Three of five Wilkes school board members listen to comments of residents during their meeting Monday. From left are Rudy Holbrook, chairman, and board members Hardin Kennedy and Kirk Walker.

In a 3-2 vote during an emergency meeting Monday night, the Wilkes Board of Education made masks mandatory for students, staff and visitors in the Wilkes County Schools.

Among 24 people who weighed in on the issue during a public comments portion of the meeting, 15 indicated support for a mask mandate and nine spoke in opposition.

Prior to Monday night, Wilkes was one of only a handful of public school districts in North Carolina without mask mandates.

Several speakers against requiring masks in schools said this would infringe on their freedom and constitutional rights. An emergency medical services professional and others questioned the effectiveness of masks. Some said wearing them for long periods can cause health problems.

One mother said having to wear a mask discouraged her child from wanting to go to school and another said it made her child have headaches.

Two former Wilkes County school nurses and other health professionals spoke in favor of requiring masks in the schools. One of the two said it would keep students in their schools rather than having to return to the remote learning used last year. She also said about 20% of students in the Wilkes schools are seriously threatened by COVID-19 due to pre-existing health conditions.

A proponent of school mask mandates noted that Wilkes Health Director Rachel Willard, the Centers for Disease Control and Prevention, N.C. Department of Health and Human Services and other health authorities endorse them. “You say that health of our students is your first priority. Actions speak louder than words,” she added.

Some speakers tied their opposition to a school mask mandate to their religious views while for others this was a reason for supporting the mandate.

Wilkes School Superintendent Mark Byrd said in response to questions from the audience of about 50 people after the board voted that masks would be provided for those without them and that the mask mandate starting date hadn’t been determined.

Byrd said the Wilkes schools had 59 active COVID-19 cases and 349 people with close contacts with active cases at the end of the first week of classes on Aug. 27. These were all students and staff, but not all active cases were school-related. He said 33 of the close contacts didn’t have to quarantine due to being vaccinated. About 41% of quarantine cases were sports-related.

School board member Kirk Walker made the motion to have the Wilkes school system “follow all mitigation and strategies as outlined in the Strong Schools N.C. Public Health Toolkit to the best of our ability and make wearing a mask or facial covering required for everyone in the school system.”

A man in the clearly divided audience then spoke up, “I will pull my kids out tomorrow.” A woman added, “So will I.”

Board Chairman Rudy Holbrook restored order and asked if there was a second to Walker’s motion.

Walker made the motion after no board members spoke when Holbrook asked if there was any discussion on the matter. This was immediately after the public comment period.

Speaking to the audience after the vote, Holbrook stated, “I’ve got something I want to say before everybody gets all tore up. You know this has passed and I want everybody, even all of you who feel like I do or don’t, to get behind this” and support masks in schools. “We’ve got to work together to get through this.”

Holbrook attempted to respond when several people in the audience made comments or asked questions simultaneously. He then stated and was applauded when he said he’s not going to fall out with any fellow board members over not getting what he wanted. Holbrook asked opponents of masks in the schools in the audience to respond similarly.

When a woman in the audience asked if masks will be required for the rest of the school year, Holbrook said the school board will revisit the mask mandate in 30 days.

Huffman added that the state legislature approved a bill requiring that school systems review their policies on masks every 30 days. The bill, signed into law Monday by Gov. Roy Cooper, requires that public school boards adopt a policy this school year on the use of face coverings by students and workers and vote at least monthly on whether to modify it.

Huffman said the review will include discussing the status of COVID-19 in the schools with the health department. “Maybe we’ll see a drastic decrease” in COVID-19 cases in the schools in October as a result of the current spike ending, said Huffman.

“Maybe those of you who talked about prayer (during the public comments), can pray for this,” said Huffman.

A woman in the audience responded, “And in the meantime, we’ll lose our freedom” by having masks mandated.

Huffman responded to the woman by saying people also are required to wear seatbelts.

Kennedy then told the audience that he voiced his opinion concerning the mask issue in a Facebook post earlier Monday.

Kennedy said he wasn’t questioning anybody’s religious faith when he posted, “When you put your faith in a mask instead of the good Lord Himself, we’ve got problems, Amen.”

He said his vote against the motion to make masks mandatory was based on his belief that wearing masks in schools should remain a matter of personal preference.

“I ask you to please tell your children that if they believe in something strongly, don’t back down,” Kennedy added.

Near the start of the meeting, Byrd spoke about the need to work together and also addressed the issue of misinformation.

“My fear is that if we have to spend so much time responding to misinformation, we won’t be able to focus on what really needs our attention.” He said incorrect information saying the meeting Monday night was already held on Sunday somehow was spread.

He added, “Please remember that if you didn’t hear it from the Wilkes County Schools, it may not be accurate. Please help us focus by not sharing things that aren’t true. We can help one another keep our focus where it needs to be.”

On Aug. 2, the Wilkes school board voted unanimously to make masks “optional for everyone in the school as long as the county threshold of positive cases for school age students stays below recommended levels.” This is what Byrd recommended.

Lindsey Roberts, the health department’s community health services director, said during an Aug. 27 meeting on the status of COVID-19 in Wilkes that 425 school-age children in Wilkes had been quarantined since Aug. 16 due to being exposed to the virus.

Roberts said another 29 Wilkes school-age children exposed didn’t have to be quarantined due to being fully vaccinated. COVID-19 vaccinations are available for everyone 12 and older.

Roberts shared a graphic in the meeting stating that that five sports teams in the Wilkes schools were quarantined last week.

She said only players who test positive for COVID-19 and players who had close contact with them, as determined by the health department, are quarantined and miss classes. This also applies to coaches. The quarantine time from athletics is two weeks.

Roberts said the health department determines who had close contact by talking to players, watching game films and by other means. She said schools decide if games can’t be played.