DENNIS AND PATRICIA BILLINGS of Wilkesboro each spent 24 days in the intensive and critical care units of Forsyth Medical Center in Winston-Salem. They lost a combined 80 pounds while battling COVID-19. Both are home now but are still battling side effects. 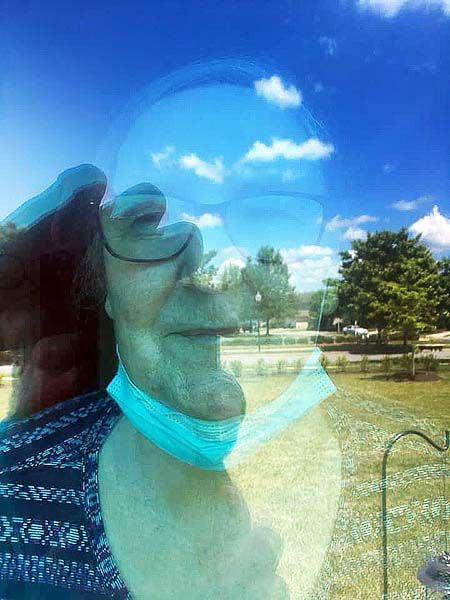 PHOTO of Patricia Billings was taken by her only child, Bobby Billings, on Mother’s Day. It shows reflection in the window separating them.

A Wilkesboro husband and wife, both 65, nearly lost their lives in May battling COVID-19, the disease caused by the novel coronavirus.

Dennis and Patricia Call Billings and their only child, Bobby Billings of Millers Creek, recently recalled the nightmarish, month-long struggle to survive while Dennis was in the intensive care unit and Patricia was on the critical care COVID floor at Forsyth Medical Center in Winston-Salem.

At one point, three members of their same immediate family and a caretaker for the family were all in intensive or critical care at Forsyth. While two of them were hospitalized, Patricia’s 94-year-old mother died in Wilkes, apparently from COVID-19, on May 9.

Dennis said during an interview Monday, “We’ve never been that sick in our lives. I wouldn’t wish this on my worst enemy, if I had one. It’s way worse than the flu or H1N1 (swine flu).”

“To get them all back home and alive, it’s a miracle,” said Bobby in an interview Friday. “It wreaked havoc on my family for nearly a month. There was about a week’s time when the doctors could not guarantee that either of my parents would make it home.”

It all began in early May when Patricia’s brother started feeling bad, developed a fever and tested positive for COVID-19. Six other family members or close friends all contracted COVID-19 from the brother’s infection. (The family asked that the brother’s name not be published to avoid any possible repercussions where he works.)

Patricia and her brother were taking care of their mother, Della Call, on alternating evenings and nights. When the brother tested positive for the virus, Bobby told his parents, “Y’all have been exposed; this is not good.”

Soon, Patricia developed a fever of around 100 and drove herself to the emergency room at Wilkes Medical Center in North Wilkesboro. She was tested there and learned a couple of days later that she had tested positive for COVID-19.

“I started out with a fever, and that night I woke up with a cough, and coughed most of the night,” she said. “Then, I just got sicker and sicker.” Later, she developed headaches and had shortness of breath.

In one week, Patricia was driven twice by ambulance to WMC and once there by her husband. She asked to be admitted three times, but thrice she was given oxygen support and sent home.

After her last ambulance trip to WMC, the hospital had Patricia transferred to Forsyth, where she was admitted on May 7. A high inflammation count led to pneumonia and scar tissue on her lungs.

When Dennis, who has heart disease and is a diabetic, started running a fever, too, “I knew it was not good,” said Bobby. “Dad tested negative at first, but he kept getting worse so I called for an ambulance on May 13 and took him to Forsyth.”

Dennis contracted the virus despite extreme safety measures at home. “We used Lysol, hand sanitizer and masks, but it was too late,” said Patricia. “It’s highly contagious.”

Della’s daytime caretaker, 61-year-old Kathy Sawyer, got sick, too, and was admitted at Forsyth. Kathy was put on life support, coded twice and spent six weeks in the hospital. Now, she’s on a feeding tube after being sent home a week ago.

Della soon also starting running a fever. “Hospice agreed to treat grandma, because we didn’t want her transported to a hospital,” said Bobby. “She was never tested for COVID-19, but she had fever and shortness of breath.”

Della died on May 9, and Bobby said at this point his family was “starting to all fall apart. My mom and uncle couldn’t be by her side because they were at the hospital fighting for their own lives.”

Bobby said his father was very confused and was getting aggressive, so he was placed in a medically-induced coma using pressurized oxygen set to the highest level before a patient was put on a ventilator. Bobby gave doctors permission to intubate his father if needed.

“After the second day, I don’t remember anything,” said Dennis. “I don’t know why, but I felt like people were trying to kidnap me and trying to shoot me. I tried to escape and get away, but they had too many security guards,” he said with a laugh.

Dennis was in such critical condition that doctors put him on remdesivir, originally developed to treat hepatitis C. “Dad was on trial medicine and was being watched really closely,” said Bobby. “Doctors told me it was almost like they had cement in their lungs, they were so sick.”

Toll on the family

Bobby said his uncle required critical care at Forsyth for six straight days and lost nearly 18 pounds. His uncle is at home, but still experiences weakness and side effects from the virus.

Dennis and Patricia Billings were both at Forsyth for over 24 days. They lost a combined 80 pounds while hospitalized. Both are home now, but are still battling side effects.

“There are so many repercussions—Mom and Dad walk for two minutes and they’re completely out of breath,” said Bobby. “Dad is still confused after being out of his mind in the hospital. They’re not positive they can’t catch it again. They’re worried that if they go through it again, they won’t make it.”

Dennis said, “You don’t get over this in two to three days. The doctor said two to three months, maybe. It’s terrible. I still can’t walk up my basement steps without stopping once. My legs feel like they weigh a ton.”

Patricia went into rehabilitation after her hospital stay. “I was so weak I could hardly walk.”

Bobby commended all of the doctors and ICU nurses at Forsyth who took care of his family. “They were so good to us. They called me every single day and said to ask them anything about Mom or Dad, because they knew I had no brothers or sisters. They called me by my first name when they called.”

Dennis said he and Patricia are both appreciative of “all the prayers we got from everybody. People we don’t even know were praying for us.” Patricia added, “We give God the praise for bringing us through it.”

Doctors told Bobby they were frustrated with people who insisted that COVID-19 was affecting only old or sick people or who said that wearing a mask violated their personal rights.

“Their wish is that they could invite those people onto the COVID floor for just five minutes so the nonsense would come to a stop. I’ve tried and tried to tell people that this virus is real, it’s highly contagious and to still take precautions.

“I know it’s hard to take this virus seriously if you or your family haven’t dealt with it, but I will tell you that it will change everything you know and think about it. I promise you that.”

Patricia concluded, “If people just knew a little bit of what it does to you and we’ve been through, they would wear a mask.” Dennis added, “They’d stay home, too.”

Editor’s note: The video interview with Dennis and Patricia Billings can be viewed at https://www.journalpatriot.com/multimedia/a-familys-fight-with-covid-19/video_02f497a2-bae6-11ea-8761-afb0e4e932d1.html.

A family's fight with COVID-19

A friend of mine since elementary school, Bobby Billings, has a compelling, cautionary tale …

Everyone in Wilkes County needs to hear this family's story and learn from it.