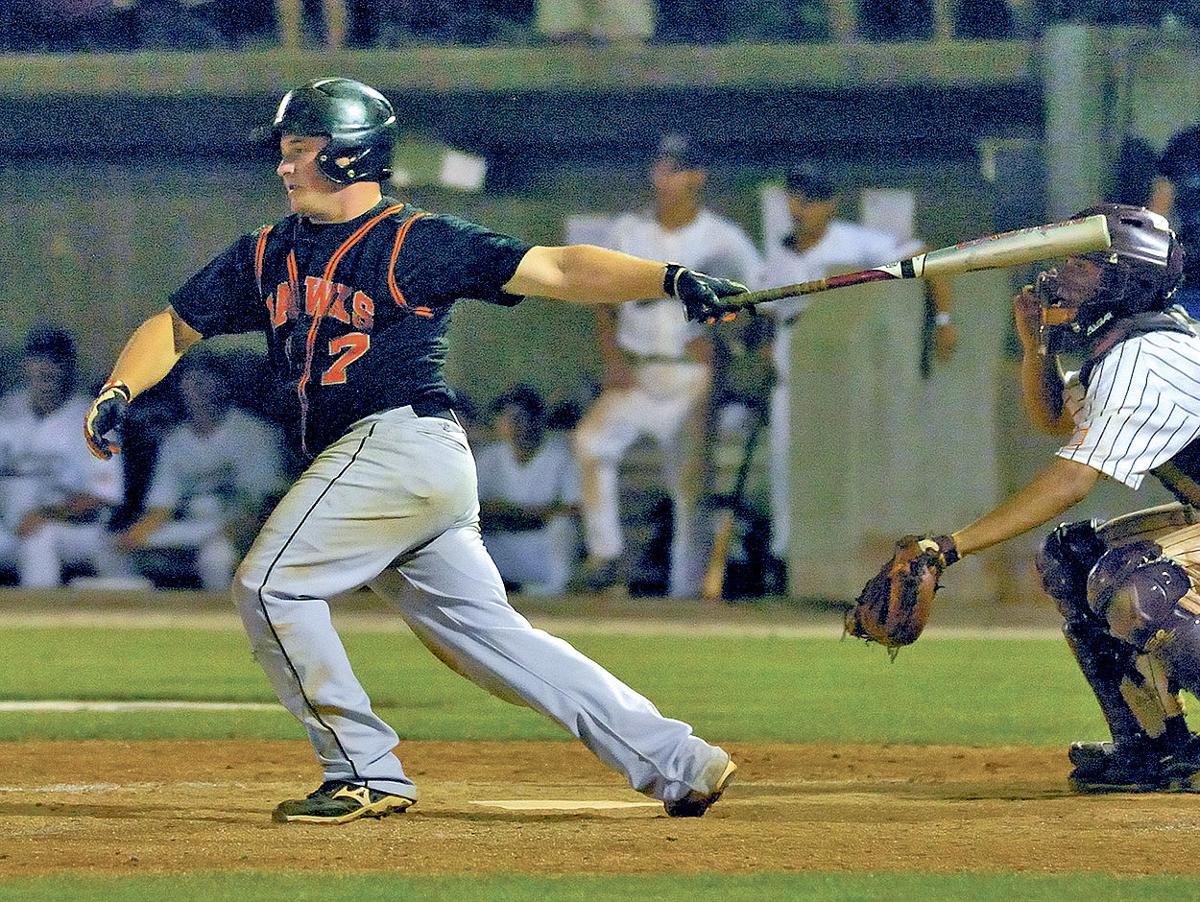 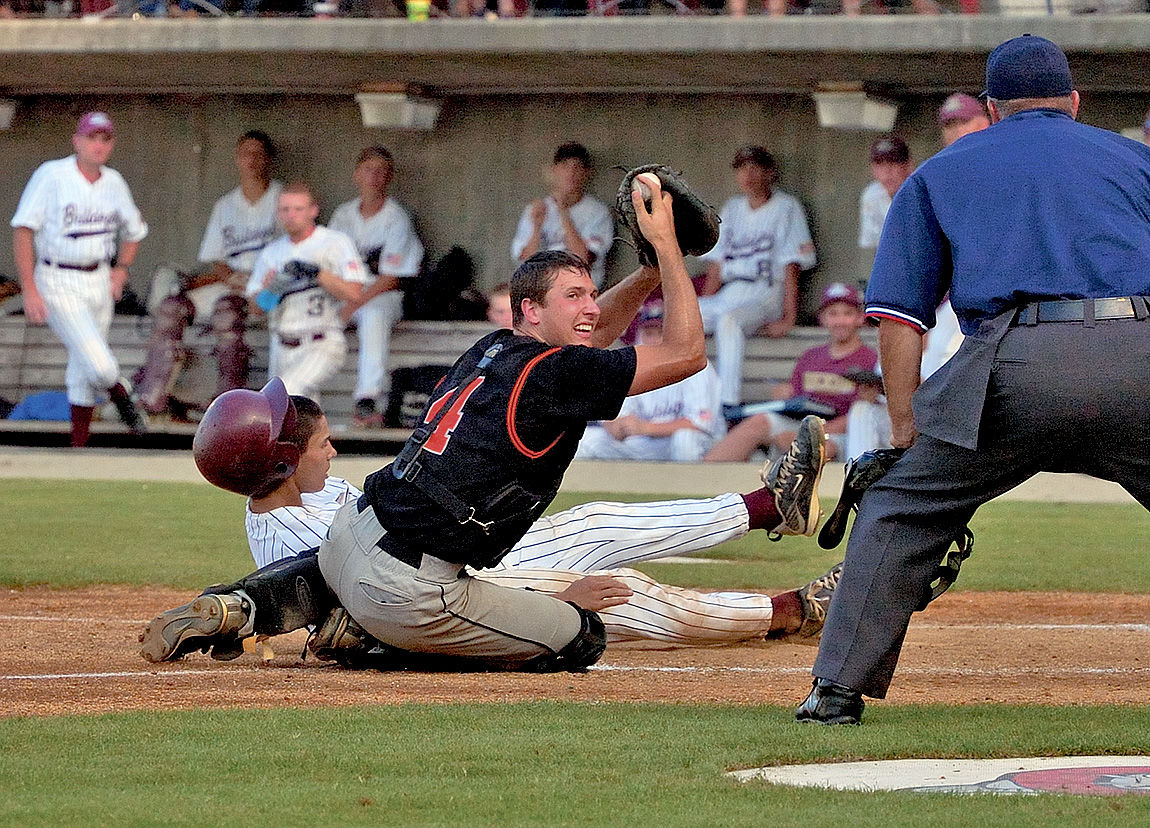 WEST WILKES catcher Logan Hallock shows the ball to the umpire after tagging out Matt Rouse at home plate in Game 3 of the 2010 Class 1A baseball state championship series, completing a first-inning double play.

WEST WILKES catcher Logan Hallock shows the ball to the umpire after tagging out Matt Rouse at home plate in Game 3 of the 2010 Class 1A baseball state championship series, completing a first-inning double play.

They are the bookends of the defining moment in West Wilkes baseball history.

Jacob Shepherd singles against North Carolina’s 1A player of the year with two outs — and two strikes — in the bottom of the ninth inning of Game 3 of the North Carolina High School Athletic Association state championship series.

Logan Hallock, running from second base, slides safely under a tag at home plate from Dixon catcher Zack Sicknick at 9:35 p.m. on Saturday, June 5, 2010.

From swing to slide to scrum, it all happened in a mere 26 seconds. But the memories will last a lifetime.

West Wilkes is currently enjoying its best sustained run of baseball success, with three consecutive Mountain Valley Athletic Conference championships. That run — suspended after a mere three games in 2020 because of the coronavirus pandemic — is on hold until next season.

By contrast, a decade ago West Wilkes wasn’t even the best team in its own conference, but came together to play its best baseball in the postseason.

With baby chicks chirping under a heat lamp in a corner of a classroom just a long home run away from the baseball field, Shepherd sat down to reminisce about the Blackhawks’ 2010 championship run. Hallock joined the conversation via FaceTime from West Jefferson.

“It brings back a lot of memories,” Shepherd said. “The end of the game was kind of a blur — I had to rehash everything as to the details — just the whole season and what it led up to.”

Hallock added, “There’s several key points in my mind throughout that season, and even really in the preseason stuff, when you look back… just pivotal moments that allowed us to get to the point where we put ourselves in a position to have an opportunity to play for a state championship.”

One of those moments came in a first-round state playoff game against North Wilkes. “They were beating us… and we wound up having to postpone the game because of rain. It just downpoured,” Hallock said. “We came back to finish the game the next day and put 17 runs up.”

Before the playoffs started, Ben Wellborn, who was West Wilkes’ head coach in 2010, passed out copies of the bracket and asked each player to fill it out.

“I would love to look back at those brackets and see what everybody’s answer was,” Hallock said, “but I feel like there were four or five of us who really, truly, in our hearts believed that we could go win this thing.

“We strung a couple of wins together and started to gain some confidence,” he added. “We peaked at the right time in the playoffs. We were playing our absolute best ball.”

Shepherd said, “Coach Wellborn, one thing he always talked about was, as a team, it was all about peaking… peaking at the right time. We scrapped. We played scrappy ball.

“We might not have been the best team, but we played as a team.”

After two lopsided wins in the first two rounds, the Blackhawks had to come from behind to beat Hayesville in the third round and set up a meeting with Murphy, which entered the game at 23-0.

And that game was when Shepherd became a believer in the Blackhawks’ championship chances.

“(Murphy) hadn’t lost a game. They had the T-shirts already made… for going to the state championship and all,” Shepherd said. “That game, we didn’t just beat them. We pretty well beat them.

“That was when it really hit me — we’re going to the championship, and we can win.”

West Wilkes won 6-0 to advance to the Western Region finals.

Hallock’s two-run homer was the difference in the 8-6 win over Hayesville, which put the Blackhawks in the fourth round for the first time since 1999. “It seemed like West Wilkes baseball couldn’t get over the hump,” Hallock said. “And then we had a real true test in Murphy.

“I remember Coach Wellborn giving us a scouting packet on (Murphy),” Hallock added. “Wellborn found every article, every Maxpreps stat, everything he could find on these guys.

“Scouting reports. In high school. That was kind of crazy. But Coach Wellborn, he was on top of it.”

The Blackhawks beat Bishop McGuinness in three games to advance to the state championship series against Dixon. The series was played at Five County Stadium in Zebulon, the home of the minor-league Carolina Mudcats.

According to Hallock, the Blackhawks prepared for that trip by having practice at L.P. Frans Stadium, where the minor-league Hickory Crawdads play.

“We did that drill where we were catching pop flies, and we had to cover so much ground,” Hallock said. “It was kind of like, you’re not playing here, but this is going to be a very close similarity to the stadium that you are going to play in.”

Being at Five County Stadium “was kind of surreal,” Shepherd said. “You come from our home turf… it’s tiny compared to being down there. It was an awesome feeling why we’re here to play, but also being able to be at an awesome place like that.”

Facing the Blackhawks in Game 1 was Dixon’s Rookie Davis. A three-time all-state selection, Davis was drafted by the New York Yankees in 2011 and made his major league debut with the Cincinnati Reds in 2017.

“I didn’t think he looked as fast… until you were actually standing at home plate and it came at you,” Shepherd said of Davis. “Then it was… he was the best pitcher we ever faced. He’d throw a 96-mile-an-hour fastball and then drop a 70-mile-an-hour changeup.”

Hallock added, “I think it was because of his fastball. It’s tough to catch up to that.

“I think it was after Game 3, and he walked by me…. That dude was big. Dude was a monster.”

And Davis was on the mound again, this time in relief, in extra innings in Game 3.

“I got hit by Rookie, probably about 90 (mph) at that time,” said Hallock, who was hit by a pitch to start the bottom of the ninth inning. Scott Gambill bunted him to second, and Andrew Ortiz was intentionally walked to set up a force play with one out.

Shepherd was down in the count 0-2. “I remember thinking in my head, ‘Don’t fly out again,’” said Shepherd, who had hit a fly ball in the seventh that was too short to score a run.

“In the seventh, I had so much adrenaline. The crowd was so loud,” he said. “I was so pumped, thinking I could smash it, and I think I was absolutely trying to kill the ball.

“In the ninth, I’m thinking I’ve just got to have a base hit. I kind of focused down and tried to make contact…. Keep the ball down, get it in the gap and see what happens.”

Shepherd grounded Davis’ next pitch past shortstop Patrick Batchelor and into left field, and Hallock never considered stopping at third. “I knew their left fielder didn’t have the greatest arm,” he said. “I turned my eyes to Coach Wellborn, and he’s swinging me in, telling me to go home.

“I literally almost fall coming around third base. I hit the base, and I kind of stumbled. Thankfully, I was able to catch my feet. It wasn’t a bang-bang play, but it was pretty close.

“Coming out of there… we probably should have worked on our dogpile,” Hallock added. “I ran around for a little while, and guys were trying to catch me. In my mind, I said I’m going to run over near our fans (behind home plate), because our fans were phenomenal.

“Jacob, he was definitely the hero.”

Hallock is the CEO, “chief energy officer” as he called it, of 1Champion, a sports-based ministry that he runs with his wife, Joanna.

“Nobody can ever take that away from us.”

Shepherd got to share the championship with his younger brother, Will, who was the third baseman as a freshman. Their father, Wayne, coached at the school and was principal in 2010. Jacob Shepherd is currently the agriculture teacher at West Wilkes.

“Me, being a schoolteacher, I talk to the ballplayers, and they ask me about how it went and the memories of it,” Shepherd said. “It allows me to give the students and the ballplayers a little bit of encouragement and something to look forward to, something to strive for.

“If they work hard, they may have the chance to get there too.”