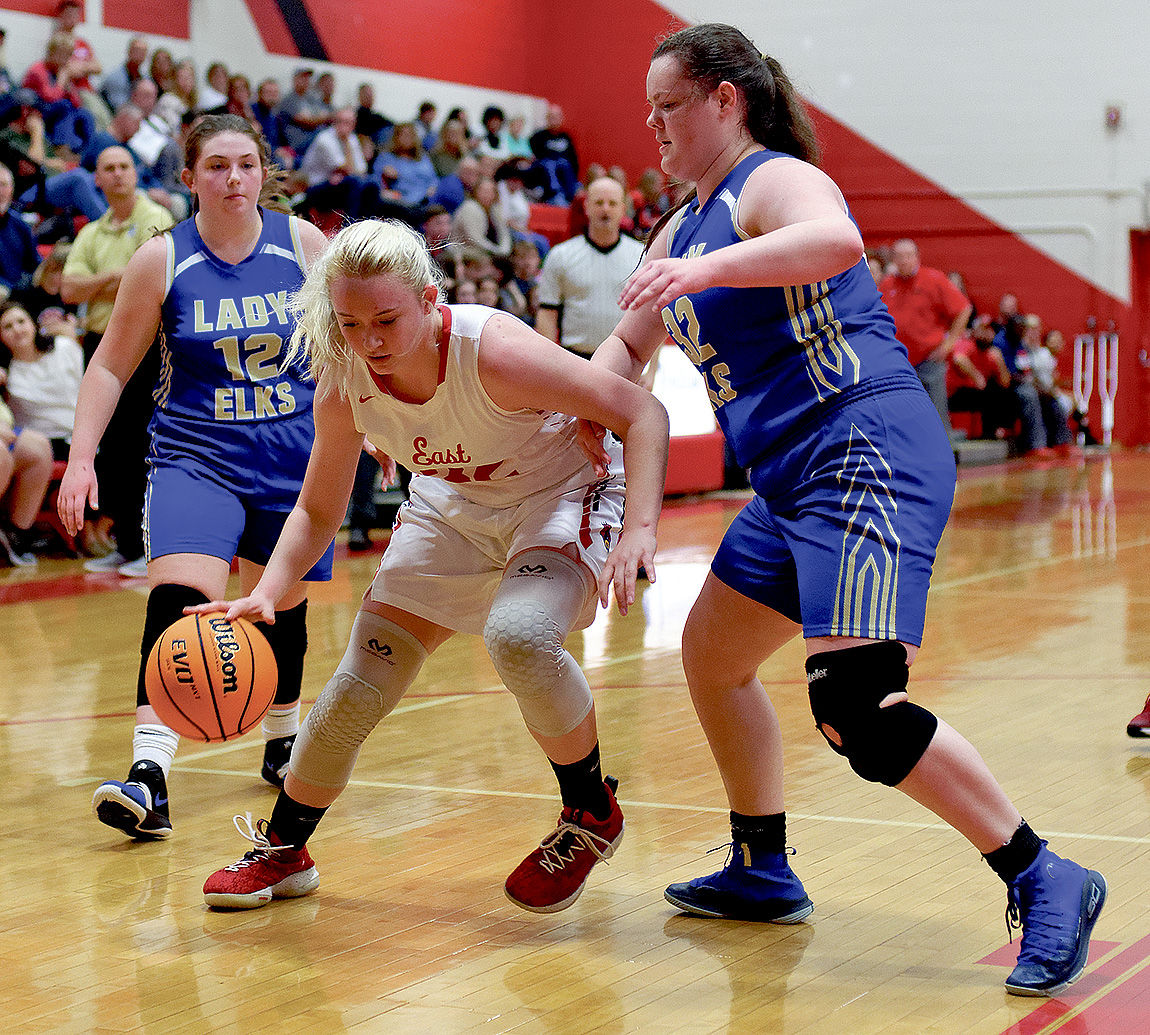 EAST WILKES’ Killian Warren drives to the basket against Elkin’s Katie Kellam and Laken Edwards in the first half. Warren scored five of her nine points in the game’s final six minutes. 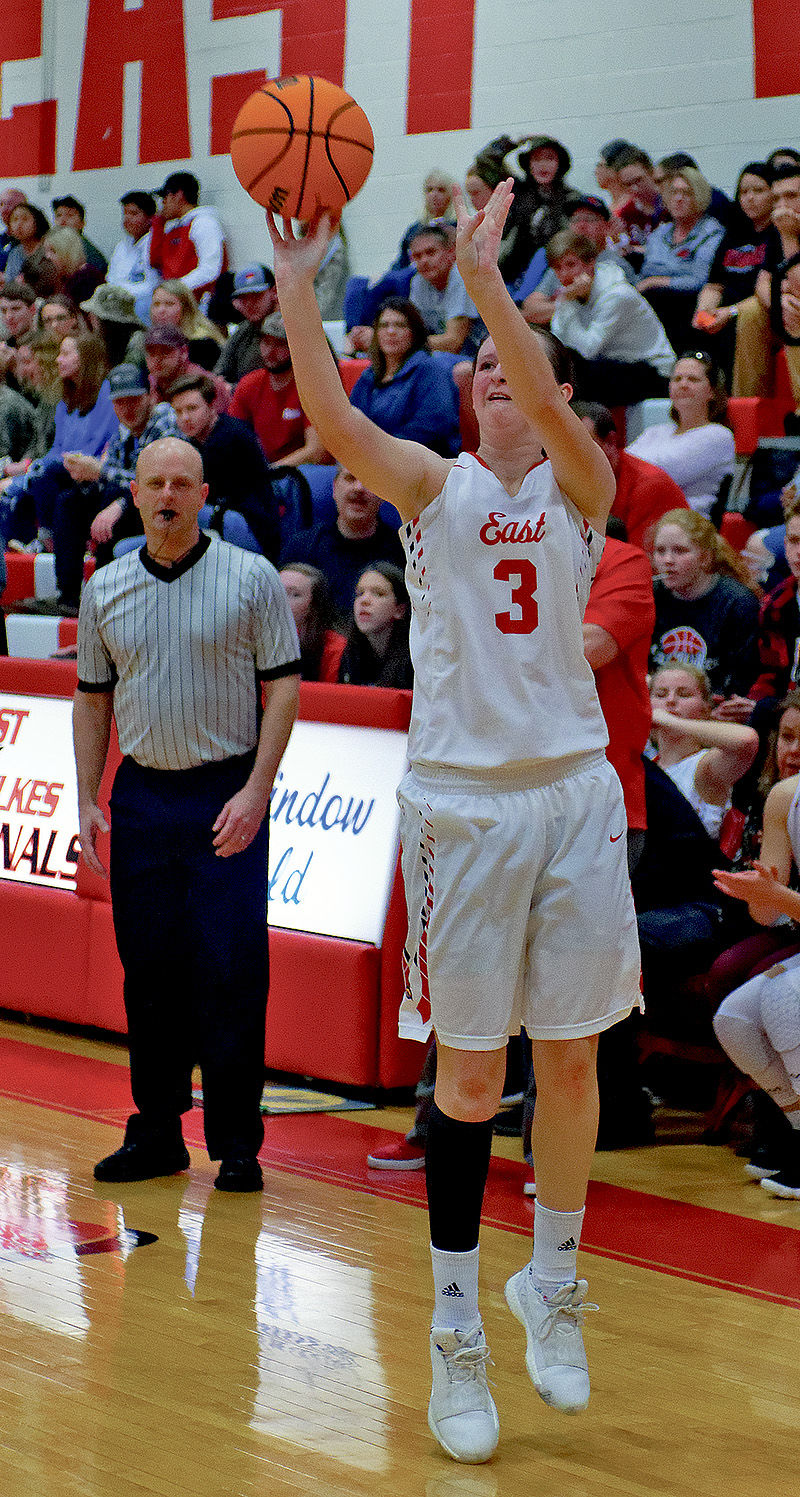 East Wilkes’ Ava Tharpe hits a 3-pointer from the left wing to pull the Cardinals within 40-39 with 2:17 to play in the game. Tharpe hit the game-winning 3-pointer from almost the same spot with a three seconds left to cap an 11-2 run and give her team a come-from-behind win. 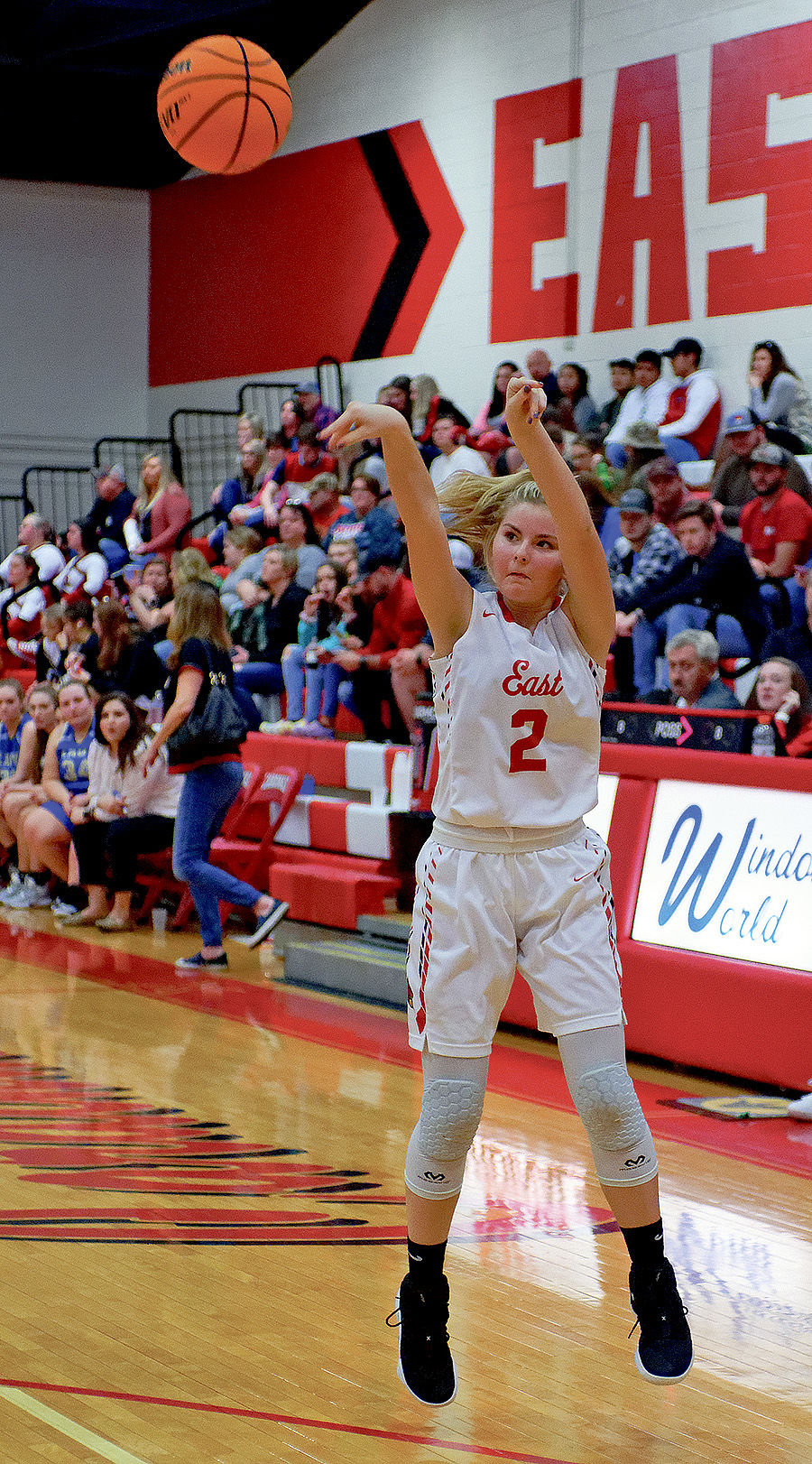 EAST WILKES’ Jaelin Roberts hit a 3-pointer with 3:47 remaining in the fourth quarter. The basket started the Cardinals’ game-ending 11-2 run.

In a low-scoring game nonetheless full of big shots and big plays, the East Wilkes girls saved the biggest of both for the end.

Ava Tharpe hit a 3-pointer with three seconds to play, and the Cardinals rallied from a seven-point fourth quarter deficit to snap a seven-game losing streak with a 42-40 win over Elkin Wednesday night in Ronda.

East Wilkes improved to 3-10, 1-4 in the Mountain Valley Conference. The Cardinals move out of last place in the conference, a half-game ahead of both Elkin and North Wilkes.

The Cardinals also snapped a two-game losing streak to the Buckin’ Elks.

Elkin, which snapped its own seven-game losing streak a night earlier with a 53-4 win at Quality Education Academy in Winston-Salem, fell to 3-11, 1-5 in the conference.

The third of Tharpe’s four 3-pointers pulled the Cardinals within 40-39 with 2:17 to play. And there it stayed for the next 134 seconds.

On their final four possessions, the Buckin’ Elks committed two turnovers and missed the front end of two one-and-ones.

Junior Audrey Jennings, the Elks’ leading scorer with a game-high 22 points, was fouled with 13 seconds to play, but she too missed the front end of a one-and-one.

After a timeout by each team with seven seconds to play, Tharpe inbounded the ball from in front of the East Wilkes bench. After briefly looking to pass the ball inside, freshman guard Briley Church instead kicked the ball out to Tharpe on the left wing. From nearly the same spot as her last attempt, Tharpe made the shot with Jennings charging at her from her left.

“I saw Audrey on me, but she kind of cheated over on the pass,” Tharpe, a senior, said of the game-winning shot. “I had an opportunity to go by her with one dribble, and I was lucky enough to make that shot. Everybody says I got fouled, but I don’t remember it. It was just being in the moment.

“That was pretty awesome.”

Matthew Campbell, the East Wilkes coach, said, “It was just players making plays…. We were going for another look actually…. I was hoping they would come out in a 2-3 zone and we would screen the middle and get to the low post.

“The shooter is the inbounder, and (you hope) that they just kind of turn their backs…. She had to find that open space, and Briley made a good (pass) to her, and she dribbled right into a shot.”

Elkin led only once, at 1-0, in the game’s first 22 minutes and trailed 17-10 at halftime after shooting 13 percent from the field and committing 10 turnovers.

Scoring more points in the third quarter (16) than in the first two combined, the Elks tied the game on Laken Edwards’ jumper from the corner and took a 25-23 lead on two free throws from Jennings with 1:25 remaining in the period.

They would try to take command in the fourth quarter.

Sophomore guard Selena Islas scored on three straight possessions, all on drives to the basket and sandwiched around two East Wilkes turnovers, to give Elkin a 32-28 lead. Islas assisted on the Elks’ next three baskets, two going to Katie Kellam with the third a pass in traffic to Lindsey Edwards on the fast break to cap a 13-3 run and make it a 38-31 game with 3:03 to play.

“In the first half, we took 15 shots in the paint and only made two of them,” said Bent Poplin, the Elkin coach. “We finish half of the shots we miss and we win the game and it’s not even close.

“For Selena to step up like she did in the second half, that gave us the push we needed to be in a position to win.

“It just wasn’t quite there.”

Playing one of their best overall games of the season, the Cardinals finished the game with an 11-2 run.

Junior Jaelin Roberts started the run with a 3-pointer off an assist from freshman Lilly Adams. Warren, a sophomore, scored in the lane off the last of Brown’s game-high six assists.

And after Warren’s defense created a turnover, Tharpe—who led the Cardinals with 12 points—hit the first of her two fourth quarter 3-pointers.

“None of this could have happened without a whole team effort,” Tharpe said. “All 10 players—whether they got in for just a few minutes or played almost the whole game—everybody contributed something to the win.”

“Tonight we played in chunks,” Campbell said, “but we had enough chunks to pull out the win. And that’s what this group needs right now is a win. It’s huge.”

It was only the third time in the past 23 meetings that the game was decided by fewer than three points. And befitting a rivalry game—the schools are separated by only five miles—it was played in front of a packed house, a fact that was not lost on Campbell.

“This community does a great job of supporting us,” Campbell said. “They want to win, don’t get me wrong—but they’re still going to come out in support.

“And this team needs that more than anything, because they’re young…. It never ceases to amaze me, the love that the community has for the basketball teams.”

Notes: East Wilkes has won 19 of the past 23 meetings with Elkin…. Senior Aubrey Wallis, who had missed most of the season with an injury, made her home debut and scored late in the first half…. East Wilkes’ game at Ashe County was postponed by inclement weather. It has been rescheduled for Jan. 20…. The Buckin’ Elks took the JV game from East Wilkes.