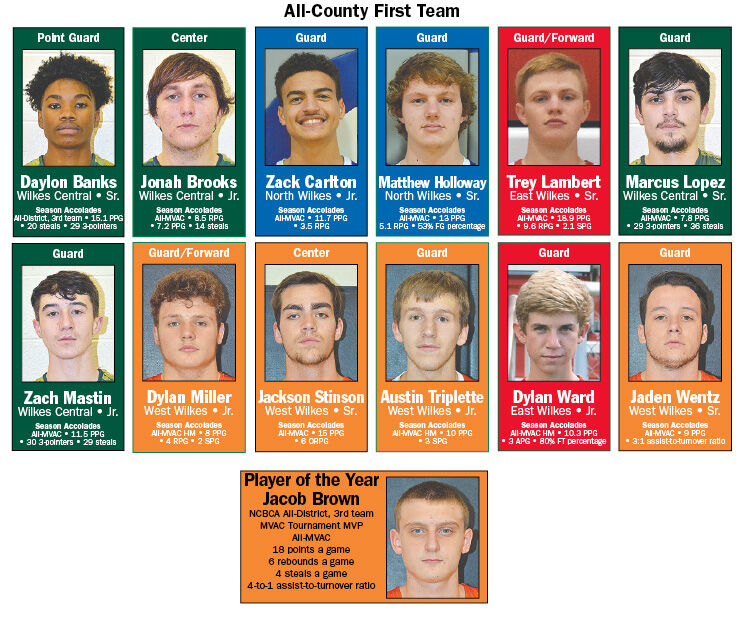 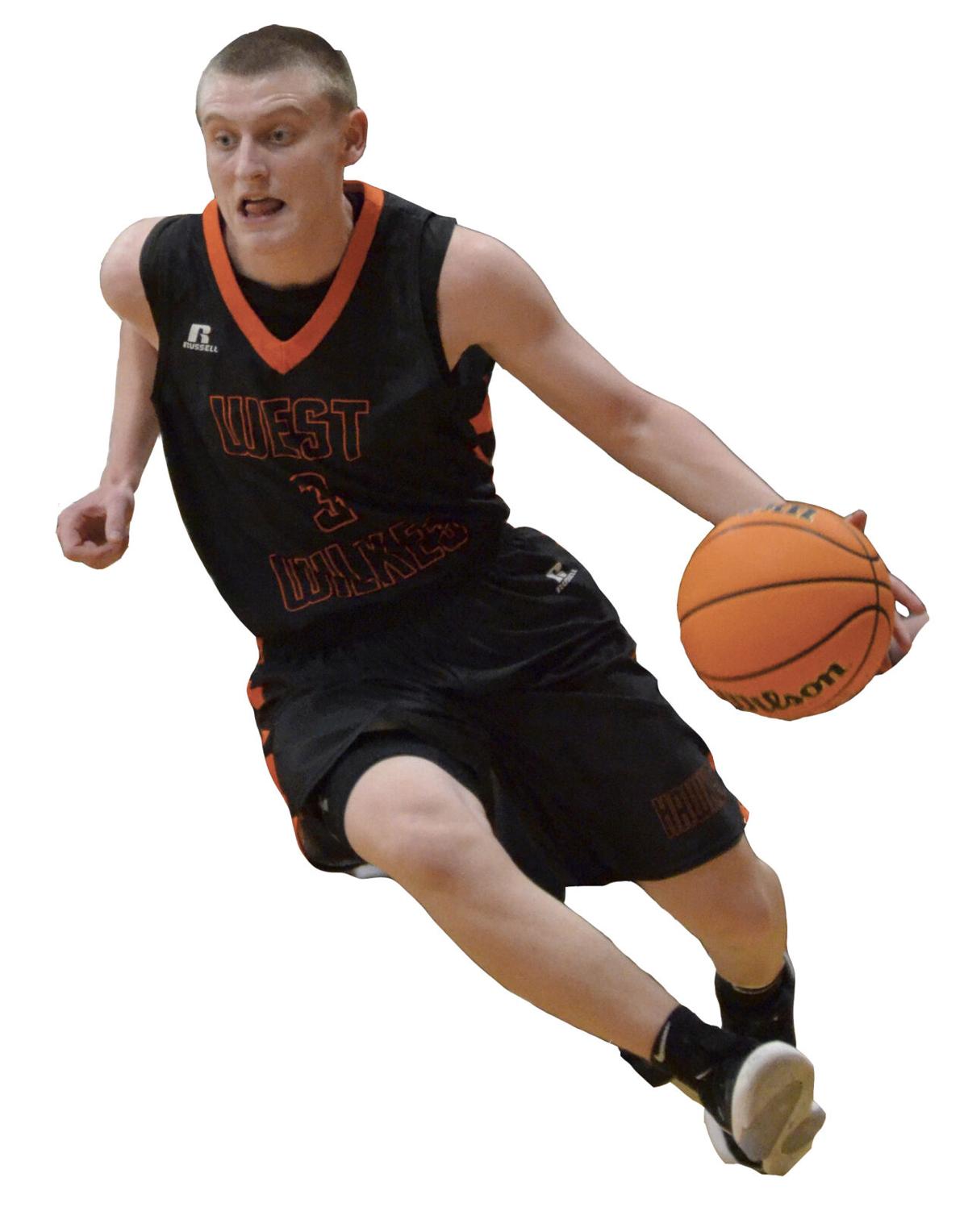 Jacob Brown had a senior year to remember on the hardwood during the 2019-20 boys basketball season.

He played a key role in West Wilkes earning the right to host a North Carolina High School Athletic Association state playoff game for the first time in five years. Individually, he was named MVP of the MVAC tournament and one of two Wilkes County players selected to the North Carolina Basketball Coaches Association All-District 11 team as a third-team selection.

For those efforts, and more, Brown was named the Wilkes Journal-Patriot Boys Basketball Player of the Year for the season.

“Jacob was the best player on our team, a floor general, and a student of the game — his basketball IQ is off of the charts,” said West Wilkes Head Boys Basketball Coach Scottie Greene. “Jacob helped lead his team to our conference championship in 29 years, in addition to having a great individual season.”

In addition to the postseason accolades, Brown reached the 1,000-point mark this winter en route to finishing with over 1,100 career points.

Brown averaged 18 points per game and four steals a game with a 4-to-1 assist-to-turnover ratio. He also added six rebounds per game.

Make up of the all-county team

There were 18 nominations for this year’s team, which were split into a first team and a second team. Counting the player of the year, the all-county first team has 13 players, who were nominated by their respective head coaches.

In Wes Rousseau’s second year as the head boys basketball coach, the Cardinals nearly doubled their win total from the previous two years combined (four) and had their highest win total in four years.

Senior guard and All-MVAC selection Trey Lambert was a big reason for that success.

Lambert, who recently signed to play baseball for Catawba Valley Community College, led East Wilkes in both scoring (18.9 points per game) and rebounding (9.6 boards per game). He also had 3.8 assists, 2.1 steals and 1.2 blocks per game.

“Trey is a team leader and explosive athlete. He led our team in every major statistical category this season, and will be very difficult to replace next year,” said Rousseau. “With his length and quickness, he was a difficult matchup for any opposing team this season.”

Dylan Ward was big from both the free-throw line (80 percent free-throw shooter) and the 3-point line (40 percent) this winter.

“Dylan was the best ball-handler on the team and had the highest assist to turnover ratio in the program,” said Rousseau.

Matthew Holloway turned in a strong senior season with solid stats on offense for the Vikings this winter.

Holloway averaged 13 points a game but was big in the MVAC games where he averaged 16.1 points a game and was named to the All-MVAC team. He also added 5.1 rebounds a game while shooting 53 percent.

One of Holloway’s biggest games was a 25-point, 13-rebound performance against East Wilkes.

“Matthew was our most consistent player throughout the conference season and developed into one of the most productive players I have ever coached,” said North Wilkes Head Coach Logan Call.

Zack Carlton also turned in an All-MVAC junior season thanks to averaging 11.7 points and 3.5 rebounds a game and Call felt he provided a big 1-2 combo on offense, alongside Holloway.

“Zack is a guy who can single-handedly keep you in a game offensively when he gets hot. He had a three-game stretch during the season where he scored 32, 24 and 20 in consecutive games to help carry us to wins,” said Call. “I am most proud with how he continued to work and play on both ends late in the season when his shot wasn’t falling.”

Brown wasn’t the only Blackhawk senior to have a banner winter.

Stinson, a player Greene called “a dominant post player and our leading free-throw shooter,” was also an All-MVAC selection.

Jaden Wentz, another All-MVAC selection, averaged nine points a game. The Warren Wilson College-signee had a 3-to-1 assist-to-turnover ratio.

“Jaden was our team’s emotional leader, on and off of the court,” said Greene. “He’s a fierce competitor who will not back down from any challenge.”

With Brown, Stinson and Wentz all graduating, juniors and All-MVAC honorable mention selections. Austin Triplette and Dylan Miller should assume much bigger roles in 2020-21 after being key contributors this past season.

Triplette averaged 10 points and three steals a game and had a pair of big 3-pointers in the Blackhawks’ tournament-clinching victory over Elkin. Miller did a little bit of everything for the Blackhawks, averaging eight points, four rebounds and two steals a game while providing key minutes off the bench.

“Austin was our leading 3-point shooter and an excellent one at that,” said Greene. “Dylan was the dirty-work player. He’s the high-energy guy who gives us a spark.”

A year after winning their second MVAC title in three years thanks to an undefeated league slate, the Eagles fought through a rash of injuries to finish tied for second in the MVAC standings.

Daylon Banks missed an early part of the season due to injury but when he returned, he averaged 15.1 points a game and hit 29 3-pointers. The senior was a third team All-District 11 selection and an All-MVAC player.

“Daylon was the most explosive player in our league when he was healthy; just a fantastic shooter,” Wilkes Central Head Coach Matt Hagaman said. “ Marcus was asked to, and did a good job, of playing a little bit of everything for us this season on both sides of the ball.”

Mastin, who picked up a lot of the scoring slack when Banks was out, averaged 11.5 points a game while hitting a team-high 30 3-pointers. He also added 29 steals and 1.8 assists.

Brooks was the Eagles’ leading rebounder and shot blocker, according to Hagaman. Brooks grabbed 8.5 rebounds while averaging 7.2 points a game. He also had 14 steals.

“Zach was solid all season and made a lot of big time plays in big moments for us this season,” said Hagaman. “Jonah gave us a commanding presence in, and around, the basket. We were certainly a more complete team with Jonah in the lineup — he drew a lot of attention inside.”

The Wilkes Journal-Patriot’s all-county second team is comprised of five players who were nominated by their respective head coaches.

East Wilkes’ Caeden Howell closed out his senior campaign by averaging 6.5 points a game and collecting 1.5 steals a game.

Howell has signed to play baseball for St. Andrews University.

“Caeden was our best defender and one the best defenders in the conference. He always drew the opposing team’s best guard in our matchups,” said Rousseau. “Caeden was a defensive leader and always played with intensity.”

Sidden, who was the Vikings’ floor general, averaged nine points a game. He also had a balanced season as he added 3.6 assists and 3.8 rebounds per game.

“Trenton was probably the most irreplaceable player we had on our team. He handled pressure as our primary ball handler throughout the year and usually guarded the other team’s best perimeter threat,” said Call. “He played nearly every minute of every game and played with unbelievable effort and energy despite being asked to play huge minutes.”

Watkins, who was the anchor of the Vikings’ defense, averaged 4.2 rebounds and 2.2 blocks a game while chipping in 5.3 points per game.

“Lyle single-handedly kept us in several conference games with his rim protection and rebounding,” said Call. “He was one of the most improved players over four years we have had in my time at North. He’s a guy who came to battle every day in practice.”

Wilkes Central’s Jakob Gowan and Colby Lakey made the most of their senior campaigns, despite missing time due to injury to earn All-MVAC honorable mention selections.

Gowan, who will join Wentz at Warren Wilson College next year, did a little bit of everything for the Eagles despite missing Central’s last three games. He averaged 7.45 points and six rebounds a game. He also hit 15 3-pointers and collected 40 steals.

Lakey, who will play baseball for Cleveland Community College, averaged 8.5 points a game and added 7.8 rebounds a game despite missing five weeks of the season due to injury.

“Jakob was our most versatile player who played inside and out. His length was a big part of our defense and we certainly missed him when he went out with an injury,” said Hagaman. “Colby was our team leader, on and off the court. He plays as hard as anyone, every day.”